2 Layout Acknowledgements Textcetera, Den Haag This report was drafted with input from many colleagues, gathered over several years. The authors would like to This publication can be downloaded from: and Parts of this publication may be reproduced, providing the source is stated, in the form: Olivier JGJ et al. (2015), TRENDS in GLOBAL CO2 EMISSIONS ; 2015 Report, The Hague: PBL Netherlands Environmental Assessment Agency; Ispra: European Commission, Joint Research Centre. This CO2 report 2015 is one in a series of annual publications by PBL Netherlands Environmental Assessment Agency and the European Commission's Joint Research Centre (JRC). After publishing web reviews in 2007 and 2008, the CO2 report series started in 2009, providing up-to-date knowledge on the trend of GLOBAL CO2 EMISSIONS from fossil fuels and cement. CO2 emission estimates have been made by PBL and the JRC on the basis of energy consumption data for the period 1970-2012 published by the International Energy Agency (IEA), and for the period 2013-2014 published by British Petroleum, except for coal consumption in China over the 2012 2013 period, for which data published by the National Bureau of Statistics of China were used.

3 The estimations are also based on production data for cement, lime, ammonia and steel, as well as on EMISSIONS per country, from 1970 to 2012, from the EMISSIONS Database for GLOBAL Atmospheric Research (EDGAR) version , which was developed jointly by the JRC and PBL. The greenhouse gas EMISSIONS of from the EDGAR FT2012 dataset have also been used for the GLOBAL EMISSIONS overviews in the annual UNEP. EMISSIONS GAP Report. All reports are available from and publications/ TRENDS -in- GLOBAL -co2-emissi ons-2015-report. PBL Netherlands Environmental Assessment Agency is the national institute for strategic policy analyses in the fields of the environment, nature and spatial planning. It contributes to improving the quality of political and administrative decision-making, by conducting outlook studies, analyses and evaluations in which an integrated approach is considered paramount.

4 Policy relevance is the prime concern in all our studies. PBL conducts solicited and unsolicited research that is both independent and always scientifically sound. As the Commission's in-house science service, the Joint Research Centre's mission is to provide EU policies with independent, evidence-based scientific and technical support throughout the whole policy cycle. Its work has a direct impact on the lives of citizens, as its research outcomes contribute to a healthy and safe environment, secure energy supplies, sustainable mobility and consumer health and safety. Working in close cooperation with policy Directorates-General, the JRC addresses key societal challenges while stimulating innovation through developing new methods, tools and standards, and sharing its know-how with the Member States, the scientific community and international partners. Contents Summary and main findings 4.

5 1 Introduction 6. Methodology and data sources used 7. 2 Results 10. Increase in GLOBAL CO2 emission growth almost stalled 10. Different TRENDS in the six largest emitting countries/regions 16. Comparison of EMISSIONS in the various countries 27. CO2 EMISSIONS from oil and gas production 36. CO2 from cement and steel production (non-combustion) 38. Data quality and uncertainties 40. 3 How to mitigate CO2 EMISSIONS from energy supply and consumption 44. Introduction 44. TRENDS in GLOBAL fossil-fuel consumption and fuel mix 45. TRENDS in renewable energy sources 47. TRENDS in nuclear energy 51. 4 Future perspectives 54. Annex 1: Methodology, data sources, comparisons 56. List of abbreviations and definitions 68. References 70.. Summary and main findings Growth in GLOBAL CO2 EMISSIONS China, United States, EU-28 and India almost stalled in 2014 account for 61% of all EMISSIONS After a decade of annual increases of 4%, on average, The top 4 emitting countries/regions, which together and two years (2012 and 2013) of slowing down to about account for almost two thirds (61%) of the total GLOBAL CO2.

6 1%, the growth in GLOBAL CO2 EMISSIONS almost stalled, EMISSIONS are China (30%), the United States (15%), the increasing by only in 2014 compared to the record European Union (EU-28) (10%) and India ( ). China saw level in 2013. In that year, EMISSIONS from fossil-fuel no growth in coal demand in 2014 and increased its CO2. combustion and from industrial processes (production EMISSIONS by only compared to 2013, which is the of cement clinker, metals and chemicals) totalled to lowest annual increase over the last decade. The United billion tonnes CO2. At the same time, the world's States increased its CO2 EMISSIONS by only , which is economy grew by 3%, showing a partial decoupling lower than in the previous two years. This was mainly the between the growth in GLOBAL CO2 EMISSIONS and that result of a small drop in coal-fired power generation and in the economy. an increased use of natural gas for space heating due to a colder winter than in 2013.

7 The pace of the continued reduction in EMISSIONS in the EU-28 was increased in 2014. Primary energy consumption to , mainly because of the decrease in fossil-fuel consumption for power generation and manufacturing, decreased but also because of the 10% lower demand for space heating. Other non-OECD-1990 countries and Russia GLOBAL CO2 EMISSIONS mainly reflect the world's fossil showed smaller decreases: Japan decreased by , energy consumption. In 2014, per capita primary energy Australia by and Russia by In contrast, CO2. consumption decreased compared to the previous year, EMISSIONS in most other non-OECD-1990 countries for the first time since 1998 (excluding the recession increased ( by in India, by in Brazil and by year of 2009). The mild winter considerably helped to in Indonesia). Most of the increase in EMISSIONS limit fossil-fuel demand for space heating, particularly in since the late 1990s has occurred in non-OECD 1990.

8 Europe. 2014 was the warmest year globally since records nations, which contributed to 61% of the GLOBAL EMISSIONS began in 1880, even in the absence of El Ni o conditions, in 2014, compared to 32% in 1990, the baseline year of which would have caused even higher temperatures. the Kyoto Protocol. China, which accounted for almost This decrease in per capita primary energy consumption half of the 61% share, has recently put a considerable was not reflected in a decrease in power generation, but effort in revising its energy statistics for the period 2000. in a modest increase in power generation of only 350 to 2013. This has definitely resulted in better estimates TWh or , which is the smallest increase since 2001 of the real fossil-fuel consumption in this period, even (except for the recession year 2009). Two-thirds of the though uncertainty levels may not have decreased by GLOBAL increase in power generation was supplied by much.

9 Comparisons of different bottom-up inventories renewable energy. Shifts towards low-carbon fuels have for China have backed our uncertainty range of 10%. been observed in different world regions. Since 2004, when wind and solar power had a share of in GLOBAL power generation, the share doubled every four years, Revision of China's coal statistics up to almost 4% in 2014. Although in the same period hydropower increased globally by almost 40% since The major revision of China's coal statistics for the 2004, its share remained the same at about 16%. The 2000 2013 period, which was published in May 2015, share of nuclear power decreased in this period by 5%, showed coal consumption to be 7% to 13% higher than from about 16% to 11%. In East Asia (notably China and previously reported for the 2005 2012 period. This Japan), the phasing in of nuclear energy will also further resulted in total national CO2 EMISSIONS from fossil- help to reduce CO2 EMISSIONS .

10 Fuel combustion that are estimated to be 6% to 11%. 4 | TRENDS in GLOBAL CO2 EMISSIONS . higher for that period compared to EMISSIONS based on changes in China's economy and the associated energy International Energy Agency (IEA) statistics released in consumption. However, it is uncertain whether these 2014, and GLOBAL CO2 EMISSIONS increased accordingly by changes also reflect structural changes in the wider GLOBAL a few per cent. These new figures have been used in this economy, GLOBAL energy efficiency improvements and in report, which shows accumulated CO2 EMISSIONS for China the energy mix of other key world players such the United to be 5 gigatonnes greater than our estimates published States, European Union, India and Russia. What we do last year. In terms of accumulative GLOBAL EMISSIONS , this know is that it is very likely that the very high GLOBAL historical revision means a shift of two months before the annual emission growth rates of, on average, 3% per year carbon budget' for the period to 2050 is reached that is observed in the years 2003 to 2011 are definitely over for considered safe for meeting the 2 oC target. 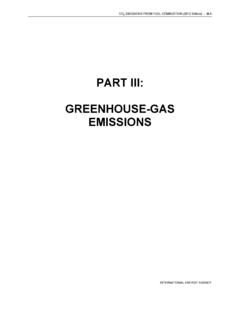 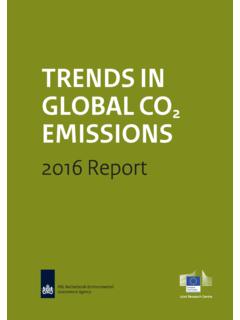 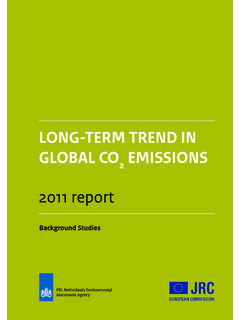 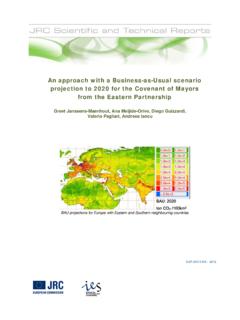 An approach with a Business-as-Usual scenario … 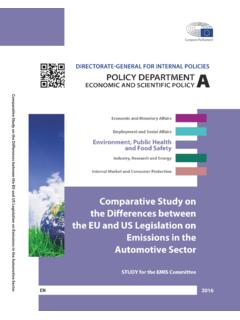 Comparative study on the differences between the EU and US legislation on emissions in the automotive sector PE 587.331 3 CONTENTS LIST OF ABBREVIATIONS 5

Frequently Asked Questions The 2020 global sulphur limit IMO has set a global limit for sulphur in fuel oil used on board ships of 0.50% m/m …