Global Tax Alert 17 July 2015. UK issues Summer Finance bill : a review of corporate tax EY Global Tax Alert Library measures Access both online and pdf Executive summary versions of all EY Global Tax Alerts. The UK Summer Budget provided the UK Chancellor with the opportunity to indicate the direction of taxation over the five year life of the present Copy into your web This includes reform in a number of areas with a Business Tax browser: Road Map and over 30 consultations promised. By comparison, this year's Summer Finance bill necessarily lags behind the Budget Services/Tax/International- approach. Substantial parts of the Finance bill are given over to areas consulted on Tax/Tax-alert-library#date by the Coalition Government, such as the reform of loan relationships, changes to venture capital trusts and the enterprise investment scheme along with a power for the direct recovery of tax debts.

1 Global Tax Alert 17 July 2015. UK issues Summer Finance bill : a review of corporate tax EY Global Tax Alert Library measures Access both online and pdf Executive summary versions of all EY Global Tax Alerts. The UK Summer Budget provided the UK Chancellor with the opportunity to indicate the direction of taxation over the five year life of the present Copy into your web This includes reform in a number of areas with a Business Tax browser: Road Map and over 30 consultations promised. By comparison, this year's Summer Finance bill necessarily lags behind the Budget Services/Tax/International- approach. Substantial parts of the Finance bill are given over to areas consulted on Tax/Tax-alert-library#date by the Coalition Government, such as the reform of loan relationships, changes to venture capital trusts and the enterprise investment scheme along with a power for the direct recovery of tax debts.

2 Measures such as the reform of the taxation of non- UK domiciled individuals, the new income tax regime for dividend taxation and the new payment regime for large companies will be addressed in future legislation. The Finance bill does contain the tax lock to prevent the rates of income tax along with the standard rate or reduced rate of value-added tax (VAT) from being increased. The lock to prevent the rates of class 1 national insurance contributions (for employers and employees) from being increased is contained in the National Insurance Contributions (Rate Ceilings) bill of 14 July 2015. The Finance bill also contains both the reduction in the main rate of corporation tax to 19% from 1 April 2017 and the reduction to 18%. from 1 April 2020. Of the other new measures announced in the Summer Budget, the Finance bill provides details of the changes to the banking levy and the new bank corporation tax surcharge along with the proposals for the treatment of carried interest and amortization of newly acquired goodwill, among others.

3 Detailed discussion enacted (US GAAP) at the relevant existing prior to that date). However, balance sheet date ( , the interim notably no such limitation applies Corporation tax rates period date not the year end date). to relevant assets created before The main rate of corporation tax, 8 July 2015. which applies to all companies New restrictions on corporation subject to corporation tax except tax relief for business goodwill Corporate debt and derivative for those within the oil and gas ring amortization contracts fence, will be reduced to 19% from Tax relief is no longer available A key purpose of the changes in 1 April 2017 and 18% from 1 April for amortization of goodwill and the Finance bill is to clarify the 2020. customer-related intangible assets relationship between tax and acquired or created by a company, accounting and to align taxable loan While the second reading of the with effect from 8 July 2015.

4 Relationship profits with accounting Finance bill will take place on Furthermore, any debits arising on profit and loss entries. Discussion 20 July, the remaining stages the realization of such assets will on the changes now included in are expected to take place after be treated as non-trading in nature. the Finance bill was started by a the Summer recess and indeed The effect of this and other recent consultation on modernizing the the Finance bill may not be changes is that there will be limited rules launched by HM Revenue &. substantively enacted until October. ways in which such debits can be Customs (HMRC) in 2013 and has Companies are, under UK Generally utilized, other than in the year of been taken forward by working Accepted Accounting Principles realization. groups in the period since. (GAAP) or International Financial The definition of goodwill and The majority of changes will Reporting Standards (IFRS), customer-related intangible assets have effect from accounting required to measure deferred tax is widely drafted.

5 It includes periods commencing on or after at the rate at which it is most likely information which relates to 1 January 2016. However, the to reverse based upon tax rates customers or potential customers new principles-based targeted enacted and substantively enacted of a business, a relationship anti-avoidance rule along with the at the balance sheet date. Under (whether contractual or not) that new rules enhancing the tax reliefs US GAAP only enacted rates are the transferor has with one or available during corporate rescues used. As both the 19% and 18%. more customers of a business, will have effect from the date the rate are included within the Finance an unregistered trademark or Finance bill receives Royal Assent. bill , for accounting periods ending other sign used in the course of a after the date of substantive The new principles-based.

6 Business, together with a license in enactment or enactment as targeted anti-avoidance rule seeks respect of any of the above. This appropriate, companies will be to counter arrangements that are mirrors legislation introduced in required to measure deferred tax entered into with a main purpose Finance Act 2015 (which is now at differing rates depending upon of achieving a tax advantage under superseded) that restricted relief when deferred tax will reverse. the loan relationship or derivative for goodwill and customer-related Scheduling of the reversal of timing contract rules. intangible assets acquired on and temporary differences may incorporation of a business. Following input from the working therefore become more important groups, the Finance bill contains as groups aim to quantify the tax The changes do not apply in a case a new and an enhanced relief for impact in future periods.

7 Where a relevant asset is acquired companies in financial distress before 8 July 2015 (or afterwards For interim periods, the tax rate which was not included in the provided the acquisition is pursuant to be used is that as substantively December 2014 draft legislation. to an unconditional obligation enacted (for UK GAAP and IFRS) or The new reliefs disapply the deemed 2 Global Tax Alert release rules in sections 361 and allowance allocation statement Investment managers: capital 362 Corporation Tax Act 2009 for for each period. There are rules gains tax treatment of carried certain corporate rescue situations. addressing the offset of foreign tax interest and changes to disguised Both these rules deem that a loan credits against the surcharge, as investment management fee has been released, thus crystallizing well as anti-avoidance provisions.)

8 Provisions a taxable profit, in certain situations. Consequential amendments are Draft legislation setting out changes Currently, there is no such exception made to the diverted profits tax to the way that carried interest from section 362 and the exception legislation in order to take account payments from partnerships will from section 361 requires a of the introduction of the surcharge. be taxed with effect from 8 July change in ownership of the debtor 2015 was released at the time of The Finance bill contains provision company in the period between the Summer Budget and is now for the announced reduction in one year before and 60 days after included in the Finance bill . The bank levy rates in 2016 and further the acquisition of the debt. The changes affect those who provide reductions each year from 2017. change in ownership condition is no investment management services to 2021.

9 However, it does not take longer required for the exception as part of an arrangement which forward at this stage the Summer from section 361 although there involves a partnership. When Budget announcement that in 2021. is a similar condition attached to calculating taxable gains in respect the taxable base will be redefined to the new section 362 exemption. of carried interest, such individuals exclude non-UK balance sheets. The old debt-for-debt exception will only be entitled to deductions to section 361 has been repealed With effect from 8 July 2015 for consideration actually paid (in but the equity-for-debt exception (15 July 2015 in respect of firms other words they will no longer be remains. As a result of the new and with a corporate partner) a tax able to claim a deduction for base enhanced reliefs, the anti-avoidance deduction will not be allowed for cost shift).

10 Rule in section 363A, that was to expenses incurred by banking In addition, any gains related to have been repealed, is now retained. companies, wherever located, which carried interest in foreign assets relate to relevant compensation Taxation of banks received by non-UK domiciled payments. Furthermore, where a The new bank corporation tax individuals will be taxable on the company suffers such a disallowance surcharge of 8% will be introduced arising basis to the extent that it is also required to bring in a with effect from 1 January 2016. they relate to services performed notional receipt of 10% of the The surcharge will be charged in the UK. relevant sum in order to reflect separately from corporation tax the costs associated with making The Finance bill also contains an and the taxable profits for the the compensation payment.

A survey of the UK tax system

Tax Rates 2006/07 3 allowance below that for an individual. The personal allowance is reduced first, then the married couple's allowance. b. Restricted to relief at 10%. 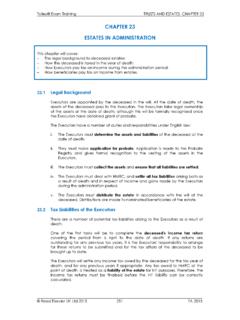 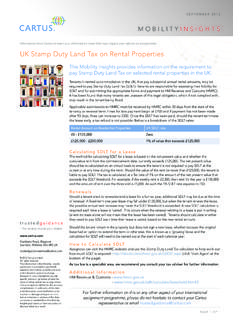 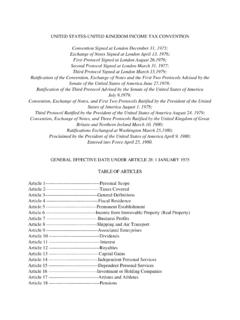 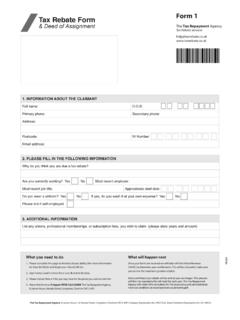