4 FRESENIUS MEDICA CARE HISTORICAL BASIS OF HEMODIALYSIS Acute and chronic kidney failure, which can lead to death if untreated for several days …

2 The first signs of uremia within the human body are an indication that the kidneys are no longer performing or are unable to completely fulfill their function. The Greek origin of the word shows that the knowledge of the condition is much older than the ability to treat this life-threatening problem. It was not until the 1940s that researchers finally established a scien- tific basis advanced enough to support the first therapeutic trials. The discoveries and inventions of dedicated doctors and scientists are to thank for the advances that have cleared the way for continuous technological improvement over the decades.

4 In early Rome and later in the Middle Ages, treatments for uremia included the use of hot baths, sweating therapies, bloodletting, and enemas. Current procedures for the treatment of kidney failure include physical processes such as osmosis and diffusion, which are wide- spread in nature and assist in the transport of water and dissolved substances. The first scientific descriptions of these procedures came from the Scottish chemist Thomas Graham, who became known as the Father of Dialysis. At first, osmosis and dialysis became popular as meth- ods used in chemical laboratories that allowed the separation of dissolved substances or the removal of water from solutions through semipermeable membranes.

5 Far ahead of his time, Graham indicated in his work the potential uses of these procedures in medicine. Manuscript of Thomas Today HEMODIALYSIS describes an extracorporeal Graham's Bakerian Lecture . on Osmotic Force at the procedure, or procedure outside the body, for filter- Royal Society in London in ing uremic substances from the blood of patients 1854. suffering from kidney disease. The actual purifying process, which requires the use of a semipermeable membrane, is based on the seminal work carried out by Graham, Fick, and others.

7 HEMODIALYSIS usually takes around three to six hours and is performed at least three times a week, usually in a dialysis center. Instead of being treated in a dialysis center, patients may be offered the option of receiving treatment in their own home environment. Various types of home dialysis give patients the opportunity to make their treatment part of their everyday life. Anticoagulant Blood pump Blood from the patient Used dialysis fluid HEMODIALYSIS . Dialyzer (filter). Fresenius MEDICAL CARE. Fresh dialysis fluid Blood to the patient 6.

9 Before the blood could be routed through the dialyzer, its ability to clot or co- agulate had to be at least temporarily inhibited. Abel and his colleagues used a substance known as hirudin, which had been identified as the anticoagulant ele- ment in the saliva of leeches in 1880. A German doctor by the name of Georg Haas, from the town of Giessen near Frankfurt am Main, performed the first Vividiffusion machine from Abel dialysis treatments involving humans. It is and colleagues, 1913. believed that Haas dialyzed the first patient with kidney failure at the University of Giessen in the summer of 1924, after performing preparatory experiments.

10 By 1928, Haas had dialyzed an additional six patients, none of whom survived, likely because of the critical condition of the patients and the insufficient effectiveness of the dial- Fresenius MEDICAL CARE. ysis treatment. The Haas Dialyzer, which also used a Collodion membrane, was built in a variety of models and sizes. 7. T H E E A R LY D A Y S. Dr. Georg Haas performing dialysis on a patient at the University of Giessen Haas, like Abel, also used hirudin as the anticoagulant in H E PA R I N. his first dialysis treatments. 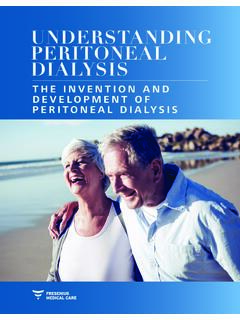