UNITED NATIONS Case No.: IT-96-21-A Date: 20 February 2001 International Tribunal for the Prosecution of Persons Responsible for Serious Violations of

2 I. INTRODUCTION .. 2. II. GROUNDS OF APPEAL RELATING TO ARTICLE 2 OF THE 4. A. Whether the Trial Chamber Erred in Holding that the Armed Conflict in Bosnia and Herzegovina at the Time Relevant to the Indictment was of an international 1. What is the Applicable Law? ..5. 2. Has the Trial Chamber Applied the Overall Control Test? .. 10. 3. The Nature of the Conflict Prior to 19 May 11. 4. The Nature of the Conflict After 19 May 12. B. Whether the Bosnian Serbs Detained in the ^elebi}i Camp were Protected Persons Under Geneva Convention 16. 1. What is the Applicable Law? .. 17. 2. Did the Trial Chamber Apply the Correct Legal Principles?.. 25. 3. Conclusion .. 30. C. Whether Bosnia and Herzegovina was a Party to the Geneva Conventions at the Time of the Events Alleged in the 31. III. GROUNDS OF APPEAL RELATING TO ARTICLE 3 OF THE STATUTE .. 34. A. Whether Common Article 3 of the Geneva Conventions Falls Within the Scope of Article 3 of the 36.

5 JUDGE KARIBI-WHYTE .. 214. A. The Allegations as to the Presiding Judge's B. Applicable Legal ii Case No.: IT-96-21-A 20 February 2001. C. Was the Allegation Proved? ..217. D. Absence of Identifiable Prejudice ..218. E. Obligation to Raise the Issue at F. XII. JUDGE ODIO BENITO AND VICE-PRESIDENCY OF COSTA 227. A. B. Was Judge Odio Benito No Longer Qualified as a Judge of the Tribunal?..229. C. Should Judge Odio Benito Have Disqualified Herself as a Judge of the Tribunal? ..237. D. XIII. JUDGE ODIO BENITO AND THE VICTIMS OF TORTURE 244. XIV. GROUNDS OF APPEAL RELATING TO 251. A. B. Prosecution's Appeal Against Mucic's 1. Failure to take into account the gravity of the 2. Failure to have regard to crimes not alleged in the 3. The determination that all sentences should be served C. Mucic's Appeal Against 1. Consideration of aggravating and mitigating 2. Comparison to the case of Wilhelm Von 3. Weight to be given to the element of deterrence.

6 286. D. Delic's Appeal Against Sentence ..289. 1. Violation of the Principle Nulla Poena Sine Lege and failure to properly consider the sentencing practice of the courts of the former Yugoslavia ..291. 2. The sentence imposed was excessive ..294. E. Esad Land 1. Comparison with other sentences imposed by the 2. Insufficient weight given to mitigating factors ..299. F. Significance of Respective Roles in the Broader Context of the Conflict Ground of Appeal Submitted by Land o, Delic and G. XV. DISPOSITION .. 306. XVI. SEPARATE AND DISSENTING OPINION OF JUDGE DAVID HUNT AND JUDGE. MOHAMED 309. A. iii Case No.: IT-96-21-A 20 February 2001. B. Background ..309. C. Analysis ..312. 1. Cumulative Charging ..312. 2. Cumulative D. Application of these principles to the present 1. Whether the crimes charged are legally distinct crimes ..326. 2. The determination of which of the duplicative convictions should be E. F. Sentencing ANNEX A .. 335. A. Procedural 1.

7 Notices of 2. Filings ..335. 3. Grounds of 4. Hearing ..342. 5. Status B. Issues Relating to the Composition of the Appeals Chamber ..342. 1. Assignment of 2. Disqualification ..343. C. Issues Relating to Defence 1. Provisional 2. D. Issues Relating to 1. Motions to Preserve and Provide 2. Production of Documents ..351. 3. Admission of Evidence and Related Issues ..351. ANNEX B - GLOSSARY OF TERMS .. 354. iv Case No.: IT-96-21-A 20 February 2001. The Appeals Chamber of the international Tribunal for the Prosecution of Persons Responsible for Serious Violations of international Humanitarian Law Committed in the Territory of the Former Yugoslavia since 1991 ( international Tribunal ) is seized of appeals against the Judgement rendered by Trial Chamber II on 16 November 1998 in the case of Prosecutor v Zejnil Delali}, Zdravko Muci} also known as Pavo , Hazim Deli}, Esad Land`o also known as Zenga ( Trial Judgement ).1. Having considered the written and oral submissions of the Parties, the Appeals Chamber HEREBY RENDERS ITS JUDGEMENT.

8 1. Prosecutor v Zejnil Delali}, Zdravko Muci} also known as Pavo , Hazim Deli}, Esad Land`o also known as Zenga , Case No: IT-96-21-T, Trial Chamber, 16 Nov 1998 ( Trial Judgement ). (For a list of designations and abbreviations used in this Judgement, see Annex B). 1. Case No.: IT-96-21-A 20 February 2001. I. INTRODUCTION. 1. The Indictment against Zejnil Delali}, Zdravko Muci}, Hazim Deli} and Esad Land`o, confirmed on 21 March 1996, alleged serious violations of humanitarian law that occurred in 1992 when Bosnian Muslim and Bosnian Croat forces took control of villages within the Konjic municipality in central Bosnia and Herzegovina. The present appeal concerns events within the Konjic municipality, where persons were detained in a former Yugoslav People's Army ( JNA ) facility: the Celebici camp. The Trial Chamber found that detainees were killed, tortured, sexually assaulted, beaten and otherwise subjected to cruel and inhumane treatment by Muci}, Deli} and Land` Muci} was found to have been the commander of the ^elebi}i camp, Deli} the deputy commander and Land`o a prison guard. 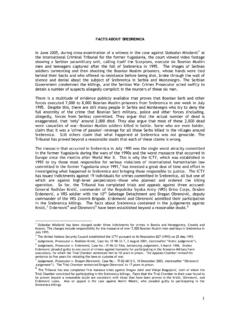 1 FACTS ABOUT SREBRENICA In June 2005, during cross-examination of a witness in the case against Slobodan Milošević1 at the International Criminal Tribunal for the former Yugoslavia, the court viewed video footage

Fact, About, Facts about srebrenica, Srebrenica Case No.: -94-1-A 15 July 1999 iii VII. The Fourth Ground of Cross-Appeal By the Prosecution: the Trial Chamber’s Finding That All Crimes Against Humanity 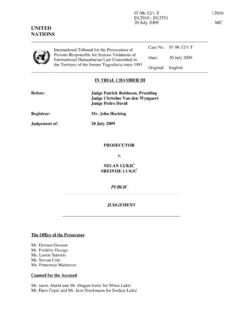 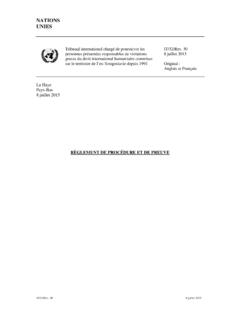 IN THE APPEALS CHAMBER Before: Judge Theodor … 2 Case No. IT-06-90-A 16 November 2012 permanently remove the Serb civilian population from the Krajina region, by ordering unlawful attacks against civilians and civilian objects in Knin, Benkovac, and Obrovac and by failing to 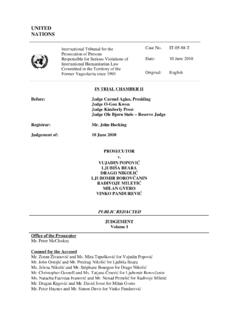 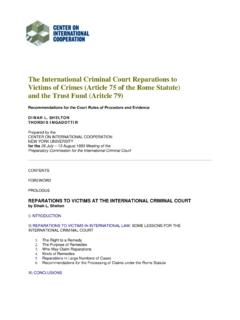 The International Criminal Court Reparations to … 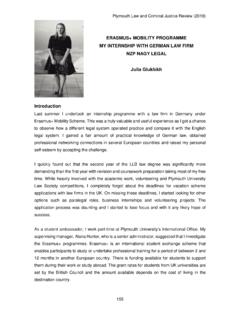 Plymouth Law and Criminal Justice Review (2018) 156 At first, I was reluctant to look at the offers available as I associated the Erasmus+ scheme with international university exchange for the purpose of study, not work-based experience.

From the U.S. Code Online via GPO Access January … United Nations Principles and Guidelines on …

2 United Nations Principles and Guidelines on Access to Legal Aid in Criminal Justice Systems Bearing in mind also the Body of Principles for the Protection of All Persons under Any Form of Detention or Imprisonment,4 principle 11 of which states that a detained person shall have the right to defend himself