2 Consumers will be able to carry our smartphones, computers, digital cameras, only one cable for USB ports instead of several. This printers and a host of other devices. Building on USB connector will look and perform differently than the solid foundation of previous USB generations, earlier versions of the standard. Type-C 's ability to consolidate power, data and Connectors video on one foolproof cable promises to be the USB Type-C is simple to use and plug in. Both ends most important development in connectivity since of the cable look and perform exactly the same. The the introduction of the standard two decades ago. connector itself, similar in size to the current USB. Type-C 's cable will enable designers and Micro-B, can be plugged in straight or flipped. manufacturers to create thinner and more elegant Its convenient and foolproof design solves a real- products, as well as facilitate the development of world problem faced by USB users everywhere . emerging technologies, offer the capacity for future existing USB cables can only be plugged in one way.

3 Figure 1: The first USB port was made available in 2000. The standard has since evolved to include USB Type-C . usb type -CTM represents breakthrough connectivity 2 December 2015. However, if there is a need, the cable can be At its inception USB interface brought data and designed to accommodate a legacy USB plug power into one connector. As the interface evolved on one end and a Type-C plug on the other end. the data throughput grew from the original Adapters will be available on the market to help end 12 Mbps to the latest USB G2 10 Gbps. users make a smooth transition from devices using Power delivery through VBUS also increased with current USB standards to the Type-C standard. add-on battery-charging capabilities. However, A single USB Type-C connector can deliver high throughput audio/visual (A/V) interface functions that several connectors provide today in remained separate. Some solutions, for example our electronic gadgets. Take, for example, a laptop. Thunderbolt and DockPort, tried to bring A/V.

4 It has one power barrel jack connector that is used into the mix using familiar connectors (such as to charge the device using a power brick. It has DisplayPort). However, breakthrough traction in the a video connector such as DisplayPort or HDMI market was never achieved. Apple introduced the that we use to connect a display. It has a USB Lightning connector which provides flippability connector that we use to connect USB peripherals that users like, but it lacks USB SuperSpeed (SS). such as a hard disk, flash drive, and so on. It also and high-resolution video capabilities. has an audio connector that gives us connectivity USB Type-C brings together all of the desired for headphones. Imagine one Type-C connector features of a unified connector, effectively merging that delivers the same capabilities served by four data, audio, video and power into one interface. (barrel jack, USB, DisplayPort and audio) discrete These functions are defined in a way that they can connectors. This truly reflects the universal capability be used in a modular fashion.

5 The interface can of the Type-C connector, while delivering a sleek be used as a legacy USB-only mode with USB. and uncluttered end-product design. The Type-C data and default power. The interface can be used connector and cable is designed for data rates of with an optional USB Power Delivery (PD) protocol up to 20 Gbps, making it forward-looking for years to further enhance power and possibly enable an to come. alternate-mode video. Figure 2. Simplicity of design, enabled by USB Type-C . usb type -CTM represents breakthrough connectivity 3 December 2015. Power capacity A CC controller function provides the mechanisms for a Type-C port to identify itself as a downstream Type-C delivers more power than any previous facing port (DFP), upstream facing port (UFP), or USB version. The interface introduces native dual-role port (DRP) depending on the desired power capability of 15 watts, which is six times the system behavior. In a default configuration, a DFP. standard USB charging rates and times the provides up to 15W power through 5V VBUS.

6 Fastest USB battery charging (BC) rate. While 15. USB PD protocol is required to provide or consume watts is probably adequate for most smartphones power beyond 15W. USB PD is also required for and tablets, standard cables coupled with USB PD. entering and exiting an alternate mode contract. enable 60 watts over a standard cable, and power charging of up to 100 watts on specially marked The flexibility of USB Type-C comes with diverse cables. This makes it possible to charge and power implementations in many different applications. a variety of devices such as notebooks, tablets and Depending on the applications, an electronic gadget a broad category of devices that, until now, was not can take on different data, A/V and power roles. possible over USB. Under the Type-C standard USB Table 1 summarizes some example use cases. power is now bi-directional, allowing a single device Type-C port implementation will vary, depending on to operate as either a power sink or source. these preferences.

8 Supporting USB requires an additional data mux. A USB PD device provides the added functions of Type-C solutions enhanced power and alternate mode video. USB Type-C connectors are defined with symmetry. The plug can be connected straight or flipped. Fast adoption The cable can be inserted from either side. These We believe the market will move quickly to flexibilities require signal multiplexers (Mux). incorporate USB Type-C into end equipment. Basic Type-C implementation requires channel The computer industry is the earliest adopter configuration (CC) functions that allow a host and as notebooks, desktops and peripherals were client device to discover each others' attachment. introduced during the 2015 holiday season. usb type -CTM represents breakthrough connectivity 4 December 2015. The mobile phone industry will be a close second. Personal electronics such as cameras, video All original equipment manufacturers (OEMs) and recorders, drones and many other devices will move original design manufacturers (ODMs) that we quickly to Type-C as the fastest way to transmit data have talked with say they are very excited about and video and deliver more power than previous the prospect of USB Type-C and what it brings to generations have been able to deliver.

9 The table. Most all of them have multiple projects in The ability to consolidate cables in environments progress to incorporate the interface into such as operating rooms should prove attractive their platforms. to the medical field. Type-C would enable medical USB Type-C will allow mobile phones to do more. professionals the ability to have access to better In the past a smartphone's sleek design could not resolution on computer displays used for micro- allow for video connectors such as DP or HDMI. surgeries and to transfer data faster during Now that is changing. We can use a small dock critical procedures. with a Type-C phone allowing it to truly become a full-featured personal computer on our desk with New opportunities connected high-resolution monitor, keyboard, mouse A key feature of Type-C is its ability to deliver more and external hard disk. power to our devices. Delivering a minimum of 15. The automotive industry is undergoing an enormous watts with the capacity of up to 100 watts, Type-C .

10 Transition as it offers much more technology to will also change the way the power is delivered. improve safety, increase efficiency and reliability, Many builders are installing electrical outlets with and enable more user-friendly interaction with current-generation USB ports today. In an effort the vehicles we drive. We believe the automotive to keep up with where the market is headed, the industry will introduce Type-C ports in new vehicles companies developing these plugs will want to at least as quickly as previous USB generations were provide Type-C outlets tomorrow. This option is just introduced. The convenience of reversible plugs around the corner. and utility of at least 15 watts of power will be very Even more profoundly, we'll see the decoupling of attractive for drivers. power supplies from end products. For example, Type-C will also open the door to many other notebook computers no longer will be sold with opportunities for the automotive industry. power bricks. 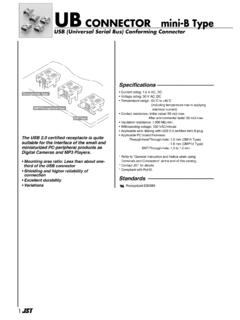 A primer on USB Type-C and Power Delivery …