Use of sodium hydroxide for cleaning and sanitizing ...

2 However, the removal of proteins from Protein A Sepharose Fast Flow used to purify monoclonal This Application Note examines these aspects of using antibodies has now been described (5). The authors sodium hydroxide as a cleaning and sanitizing agent. repeatedly used M sodium hydroxide with a contact time It includes many examples of particular interest to producers of 15 minutes and noted that they could run the affinity of recombinant proteins, monoclonal antibodies and column for 85 cycles over more than two years with no loss oligonucleotides, since designing and scaling up validatable of capacity. More importantly, they found that this routine cleaning processes is a critical issue in the commercial eliminated detectable cross-contamination from previous manufacture of these products (1).

3 Batches of monoclonals, which had been observed when other cleaning procedures were employed. In addition, there Efficacy was no endotoxin contamination and only very low levels of sodium hydroxide has been shown to be effective in leakage, which were deemed unlikely to pose a clinical removing proteins and nucleic acids. It is also effective for hazard. inactivating most viruses, bacteria, yeasts, and endotoxins. It is common practice in industrial manufacturing to save Nucleic acids time by adding a salt, such as sodium chloride, to the sodium Nucleic acids can bind tenaciously to anion exchangers. hydroxide solution to combine cleaning with sanitization. However, work in our laboratories has shown that a combination of 1 M sodium hydroxide and 3 M sodium Removal of proteins and nucleic acids chloride with a total contact time of one hour effectively As a cleaning agent, sodium hydroxide saponifies fats and removes radiolabelled calf thymus DNA from DEAE.

4 Dissolves proteins (2). In general, it can solubilize precipitated Sepharose Fast Flow, a weak anion exchanger. A small proteins. Its hydrolyzing power is enhanced by the presence percentage of the radiolabelled DNA was retained, and could of chlorine (3). not be eluted under any conditions tested. Others have found that lower concentrations or shorter contact times are The ability of sodium hydroxide to remove proteins and insufficient to remove nucleic acid from DEAE Sepharose nucleic acids from chromatography media depends on the Fast Flow and restore the medium's separation capabilities. nature of the media, the sample, and sample contaminants that may interfere with the cleaning efficiency. For example, Further work on Q Sepharose Fast Flow, a strong anion a higher concentration of sodium hydroxide may be required exchanger, has shown that 1 M sodium hydroxide combined if lipids are bound to a protein.

5 To demonstrate the with 1 M sodium chloride effectively removes DNA, but that effectiveness of sodium hydroxide , run blank gradients after the level of removal is dependent on the nature of the sample cleaning and sample storage solutions periodically (4). (6). The contact time for cleaning -in-place (CIP) in these experiments was 2 hours. For one sample, DNase was required to completely remove DNA from the anion exchanger. an 18-1124-57 AD, 2001-06 p1. Process chromatography Inactivation of virus, bacteria, Bacteria and yeasts Large amounts of microorganisms such as yeasts and yeasts and endotoxin bacteria can destroy the function of chromatography Virus columns. They may also have indirect effects, such as clogging Experiments performed by a testing laboratory showed that filters and other system components.

6 In addition, they may M sodium hydroxide was sufficient to inactivate the produce harmful substances such as endotoxins (see later), murine leukemia virus, a commonly used model enveloped enterotoxins and proteases. Table 2 shows that sodium virus (7). More recently, Q-One Biotech Ltd. has made hydroxide is very effective in inactivating a number of yeasts available its data on the ability of sodium hydroxide to and bacteria and that this inactivation is dependent upon inactivate eight different viruses. Both M and M concentration, contact time, and temperature. sodium hydroxide were tested and the kinetics of inactivation It is clear from Table 2 that spores may not be totally were reported (Table 1).

7 It is worth noting that even highly inactivated by sodium hydroxide . However, good resistant, non-enveloped viruses, such as canine parvovirus manufacturing practice (GMP) should eliminate the and SV-40, are inactivated by sodium hydroxide . admission of spores into a manufacturing environment. Furthermore, recent reports of new forms of Creutzfeldt- Jakob Disease (CJD) and its potential link to bovine Peracetic acid has been suggested by some as an effective spongiform encephalopathy (BSE) have raised further sanitization and even sterilization agent for chromatography concerns about adventitious agents. sodium hydroxide has processes (10). While there is no doubt that peracetic acid is been shown to be effective in inactivating the BSE agent, an effective sterilizing agent, the extractables that may result which is otherwise extraordinarily resistant to most from exposing the chromatography system to this agent can treatments, including ashing at 360 C for one hour (8,9).

10 May retain a heavy bioburden load when systems are deliberately contaminated with test microorganisms. Microorganism ATCC No. Type We have found that 1 M sodium hydroxide for 1 hour is an Escherichia coli 8739 bacteria gram excellent sanitization procedure for a BioProcess . Staphylococcus aureus 6538 bacteria gram + chromatography system (11). Similarly, we found that M. Pseudomonas aeruginosa 9027 bacteria gram sodium hydroxide with a contact time of one hour is sufficient Candida albicans 10231 yeast for sanitizing a BioProcess stainless steel column (12). Aspergillus niger 16404 mould Endotoxins B) Test results at different times and temperatures. Figure 1 illustrates the effectiveness of sodium hydroxide in (From Amersham Biosciences. 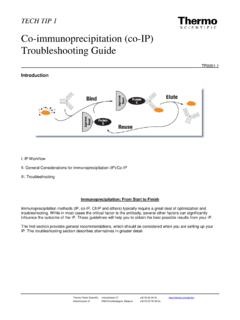 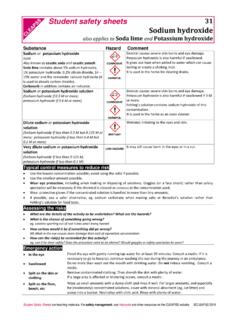 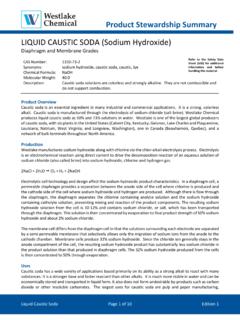 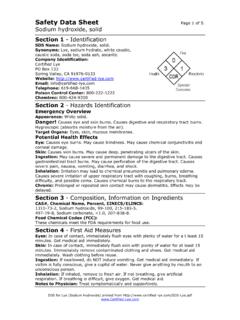 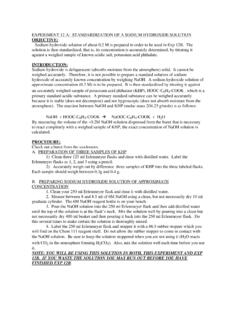 EXPERIMENT 12 A: STANDARDIZATION OF A SODIUM …

Sodium hydroxide solution of about 0.2 M is prepared in order to be used in Exp 12B. The solution is then standardized, that is, its concentration is accurately determined, by titrating it against a weighed sample of known acidic salt, potassium acid phthalate. INTRODUCTION: Sodium hydroxide is deliquescent (absorbs moisture from the atmosphere ... 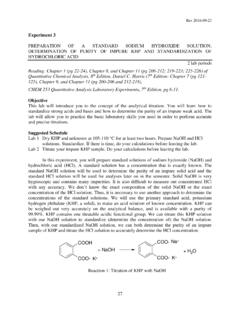 PREPARATION OF A STANDARD SODIUM HYDROXIDE … 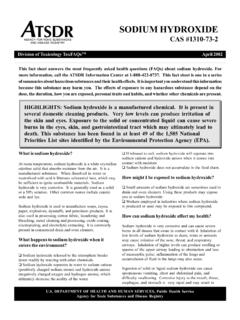