2 Some have multiple sites. RELIGIOUS LEADERS. Ordained/Commissioned/Licensed Leaders Common terms for megachurch leaders include minister, pastor or reverend. Teams of associate ministers usually support the senior minister/pastor. Almost all megachurch pastors are male. Some denominations, including most Pentecostal churches, allow for leadership roles for women, although few have assumed leadership of megachurches. Lay Leaders Depending on their size, megachurches may have dozens of full-time staff and/or hundreds of volunteers. POINTS OF CONTACT. Local: Congregations are usually led by a full-time pastor. Some may have an elected governing committee. First point of contact at local level should be both pastor and governing committee.

5 ETIQUETTE QUICK TIPS. Greeting When introducing yourself to a religious leader, use formal religious titles unless instructed otherwise (Reverend, Pastor, Dr.). Physical Interaction Shaking hands and hugging is common in most Evangelical Christian denominations. Other When entering any Protestant house of worship (including a megachurch), shoes are generally left on but men should remove hats or caps. Other than this general practice, traditions around dress codes for both sanctuary spaces and office spaces vary dramatically according to culture and geographical region of the country. In general, there are no rules about what one may wear or not wear, and dress is often casual in many megachurches. Adapted with permission from materials created by the National Disaster Interfaiths Network and the USC Center for Religion and Civic Culture.

6 Supported by DHS award 2010-ST-061-RE001 to the National Center for Risk and Economic Analysis of Terrorism Events (CREATE) at USC. TS Engaging Evangelical Megachurch Religious Leaders ( ). Other (Continued). Ask before participating in worship services. Guests may be invited to participate in some worship activities. If not a member, limit participation in these activities ( taking communion or healings) unless invited. Ushers can help with customs, dress, and etiquette. Many evangelicals believe that Bible study and prayer alone instead of professional medical intervention can overcome mental health concerns. Use discretion when making referrals to mental health service providers. GOVERNANCE / JUDICATORY. Approximately half of megachurches are non-denominational and half are denominational.

7 Southern Baptist Convention churches make up about 16% of megachurches. When taking into account other networks, fellowships, or associations of churches, the percentage of affiliated megachurches grows to 70%. The remaining 30% are completely free-standing and independent and operate autonomously. MEETING LOGISTICS AND SCHEDULING. Scheduling and Holidays Most evangelicals gather weekly for communal worship involving singing, Bible readings, and a sermon on Sunday mornings. Many hold mid-week bible study, Saturday and Sunday evening services, and host other events and services throughout the week. Be aware that many pastors take Monday as their day off. Holidays include: Christmas: a celebration of the birth of Jesus as God incarnate.

8 Holy Week: leads up to Easter; begins with Palm Sunday (recalling Jesus' return to Jerusalem); includes Maundy Thursday (recalling Jesus' institution of the practice of Holy Communion during his last meal with his disciples) and Good Friday (recalling Jesus' crucifixion). Easter Season: the most important season in the Christian year celebrating the resurrection of Jesus from the dead. Pentecost: commemorating the receipt of the Holy Spirit by the nascent Christian community, fifty days after Jesus'. Resurrection. This holiday is recognized by many and is a major celebration for some. All Protestants follow the same liturgical calendar, with varying levels of observance for the seasons of Advent and Lent. Some congregations celebrate Homecoming (usually late summer; when those who have been away from church return).

9 Some Protestants also observe other days related to their own congregation's history. Thanksgiving Day (a national holiday) is celebrated as a religious holiday by some Protestant churches. Food Few general restrictions or requirements; check with individual leaders. Many evangelicals choose to avoid alcohol. Logistics The scope of many megachurches' social media followings and contact lists can be helpful in reaching a large number of disaster survivors spread over a wide geographical area. DRESS. Many pastors wear attire similar to that of lay members varies from casual to business casual to Sunday best attire. Religious leaders with a denominational affiliation may wear clothing prescribed by their denomination or a variety of other ecclesiastical clothes based on personal choice or understanding of their denomination's historical preferences.

10 ABOUT Evangelical CHRISTIANITY AND MEGACHURCHES. A megachurch is defined as a church having a large Protestant Christian congregation with an average weekly attendance of 2,000 or more. Other characteristics often include a charismatic, authoritative senior minister, multiple social and outreach ministries, and a very active congregational community. Eighty-two percent have a majority Caucasian congregation. There are more than 1,600 megachurches in the , with the largest concentrations in California, Texas, and Florida (the largest is Lakewood Church in Houston with an average weekly attendance of 43,500 and annual budget of $70 million). While approximately 71% of megachurches are Evangelical , as an umbrella term, evangelicalism covers an enormous diversity of denominations and independent churches. 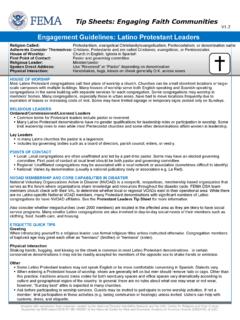 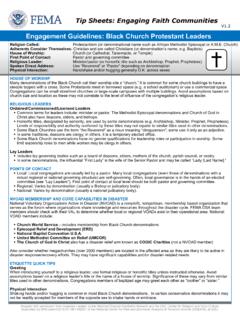 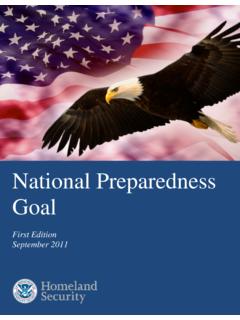 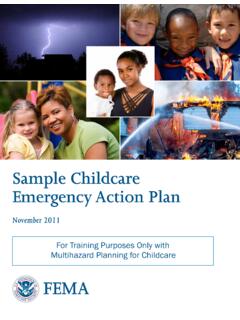 Sample Childcare Emergency Action Plan November ... This sample plan is for training purposes only and is based on a fictional child care facility and location. It 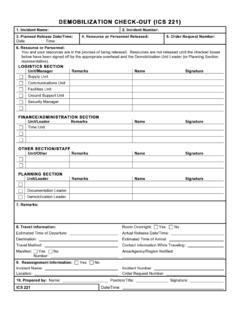 The Demobilization Check-Out (ICS 221) ensures that resources checking out of the incident have completed all appropriate incident business, and provides the Planning Section information on resources released from the incident. Demobilization is a planned process and this form assists with that planning. 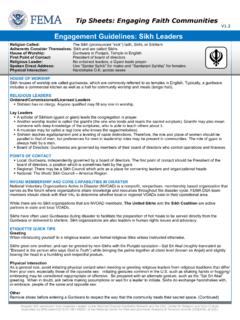 Sikhism is based on the teachings of its ten Gurus enshrined in the Guru Granth Sahib (Sikh holy book). Sikhs are the disciples of God who follow the Guru’s writings and teachings. 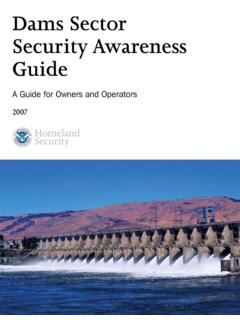 Dams Sector . Security Awareness Guide. A Guide for . Owners and Operators. ... ing impact on security, national economic security, or public health or safety. Key resources are the publicly or privately ... Sector security partners are the Federal, State, regional, territorial, local, or tribal government entities that own, National Continuity Policy Implementation Plan vii . ... ning is simply the good business practice of ensuring the execution of essential functions ... continuity programs based on continuity requirements be included and prioritized appropriately within agency budget re­ ...

Lesson 3: Getting Started Lesson Overview In the previous lesson you were introduced to the resources and processes you will use on the job. In order to be an effective GIS Specialist, you need to know how to set up in your new

Lesson, Getting, Started, Getting started, Lesson 3 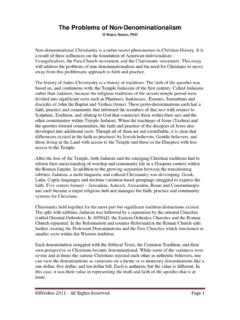 In America, the Protestant denominations had to operate in competition with the Free Church denominations because of the absence of a State sanctioned Church, common in

The Biblical Canon of the Ethiopian Orthodox …

Anke Wanger THE-733 3 Church has the most extensive collection of Biblical books considered to be canonical of all the major Christian denominations.5 The number of books as well as the exact titles are laid down in the Feteha Negest (Law of the Kings), a book of law used in Christian 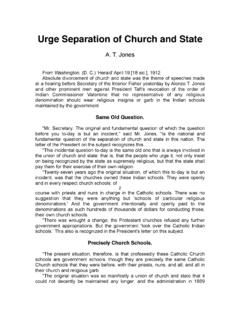 Urge Separation of Church and State - … 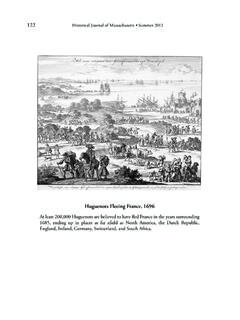 122 Historical Journal of Massachusetts • Summer 2012 Huguenots Fleeing France, 1696 At least 200,000 Huguenots are believed to have fled France in the years surrounding 1685, ending up in places as far afield as North America, the Dutch Republic,