7 Market overview IRON ORE Iron ore Platts IODEX 62% averaged US$ 71.3/dmt in 2017, an increase of 22% from 2016, supported by the steel sector outperformance that led to higher steel prices across the world.

3 He concluded that 2017 was a turning point for Vale. We started ambitious changes in efficiency, cost management and corporate governance. We laid the foundations for diversifying cash generation by improving the asset base we have today to reduce our dependency on iron ore. We aim to transform Vale into a predictable company .1. Adjusted EBITDA was US$ billion in 2017 , 28% higher than in 2016, despite the negative impact of the BRL appreciation ( ) and higher bunker oil prices (45%), mainly as a result of higher realized prices and premiums. Quarterly adjusted EBITDA was US$ billion, in line with 3Q17 despite the reduction of US$ in Platts IODEX, as a result of higher prices in Base Metals and Coal, higher sales volumes in Ferrous Minerals and lower costs in Base Metals.

4 Free Cash Flow was US$ billion in 2017 , the highest level since 2011, and net debt decreased by US$ billion, totaling US$ billion as of December 31st, 2017 . Quarterly Free Cash Flow increased considerably vs. 3Q17, totaling US$ billion in 4Q17. This enabled a significant net debt reduction of US$ billion quarter-on-quarter. The solid operational Performance and the conclusion of our divestment program accelerated Vale's net debt reduction. The US$ billion net debt in 4Q17 is equivalent to a pro forma net debt of US$ billion, considering the cash inflows of US$ billion from the conclusion of the Fertilizers deal with Mosaic in January and from the Project Finance at Nacala Corridor to be received soon. We have obtained the financial close of the Nacala Project Finance, which means that all the conditions precedent were fulfilled, and we will receive the proceeds on March 21st, 2018.

5 These inflows, together with the continuing cash generated from operations, will enable us to achieve our US$ 10 billion net debt target in the short term , highlighted Chief Financial Officer Mr. Luciano Siani Pires. Capital Expenditures reached their lowest level since 2005, totaling US$ billion in 2017 , decreasing US$ billion vs. 2016 with the conclusion of the S11D mine and plant project. CAPEX is expected to remain at these levels in the coming years. Adjusted EBITDA for the Ferrous Minerals business segment was US$ billion in 2017 , 26% higher than in 2016, mainly as a result of net effect of the 22% increase of the Platts IODEX in revenues and costs (US$ billion) and gains through higher premiums and 1 Excluding Manganese and Ferroalloys.

6 4. commercial initiatives (US$ billion), which were partly offset by the negative impact of the exchange rate (US$ 556 million) and the 45% increase in bunker oil prices (US$ 409 million). Adjusted EBITDA per ton for Ferrous Minerals2 was US$ in 2017 , 24% higher than in 2016 mainly as a result of higher price realization and a better product mix, despite the 45%. increase in bunker oil prices. Vale is focused on maximizing its margins through product mix and volume adjustments as well as optimization of the balance between costs and price realization. Looking forward, costs will reduce and price realization will increase further on the back of continuous supply chain optimization , commented Mr. Peter Poppinga, Executive Officer for Ferrous Minerals and Coal.

7 Adjusted EBITDA for pellets represented 18% of Vale's total Adjusted EBITDA, totaling US$ billion in 2017 , a 52% increase vs. 2016. Quarterly adjusted EBITDA for Ferrous Minerals was US$ billion in 4Q17, decreasing US$ 355 million vs. 3Q17, mainly due to lower prices. After excluding the exogenous factors of lower market prices and premiums (US$ 581 million), adjusted EBITDA was US$ 226 million higher than in 3Q17. Quarterly iron ore fines and pellets EBITDA break-even3 increased to US$ in 4Q17, US$. higher than in 3Q17, mainly as a result of exogenous factors such as higher spot freight rates, higher bunker oil prices and lower 65% Fe premiums. Quarterly CFR dmt4 reference price for iron ore fines was US$ in 4Q17, US$ higher than the quarterly average Platts IODEX.

8 Adjusted EBITDA for Base Metals was US$ billion in 2017 , increasing 16% vs. 2016. mainly as a result of higher prices. We are on track to ensure that each and every asset in Base Metals is cash flow positive irrespective of prices, while also maintaining the optionality of capturing the possible upside in the market that comes with the advent of electric vehicles. In 2017 , we carried out a detailed review on a mine-by-mine basis, putting in care and maintenance two mines in Canada and one nickel refinery in Taiwan. Other stoppages are planned for 2018 such as the precious metals refinery in Acton and the smelter and refinery in Thompson. Additionally, we have just launched our cost efficiency program targeting a reduction of US$ 150 million by 2020 , commented Mr.

9 Eduardo Bartolomeo, Executive Officer for Base Metals. Quarterly adjusted EBITDA for Base Metals totaled US$ 782 million in 4Q17, the highest quarterly level since 1Q11, with an increase of US$ 221 million mainly as a result of higher prices and lower costs. Quarterly adjusted EBITDA of VNC was US$ 11 million, mainly due to higher nickel and cobalt prices, the quarterly production record of cobalt and lower costs5, which decreased 14% to US$. 8,420/t in 4Q17. 2 Excluding Manganese and Ferroalloys. 3 Measured by unit cash costs and expenses on a landed-in-China basis and adjusted for quality, pellets margin differential and moisture, excluding ROM. 4 dmt = dry metric ton 5 VNC unit cash costs net of by-product credits. 5. Adjusted EBITDA for the coal shipped through Nacala reached US$ 410 million in 2017 driving the improvement of the Coal business adjusted EBITDA of US$ 330 million in 2017 , the first positive result since 2010.

10 Net income of US$ billion in 2017 was US$ billion higher than in 2016. Vale will pay R$ billion (US$ billion) of shareholder remuneration in the form of interest on capital. Vale's Board of Directors approved the distribution of R$ billion in December 2017 and R$ billion in February 2018 to be paid in March 2018, which is equivalent to the minimum established by Vale's bylaws. The decision to pay the minimum required remuneration reflects a cautious and disciplined approach from Vale, until the Company receives the proceeds from asset sales and cash generation from operations. The new dividend policy is being discussed and will be announced until the end of March. Selected financial indicators US$ million 2017 2016 2015 2014 2013. Net operating revenues 33,967 27,488 23,384 35,124 43,953.

As filed with the Securities and Exchange Commission on April 10, 2017 UNITED STATES SECURITIES AND EXCHANGE COMMISSION Washington, D.C. 20549 Form 20-F 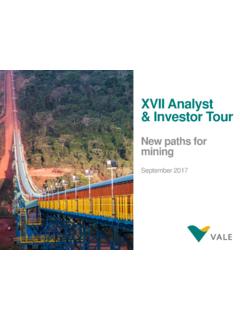 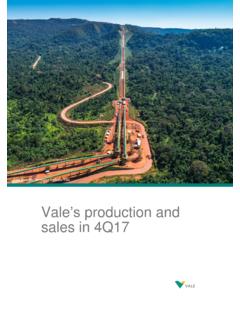 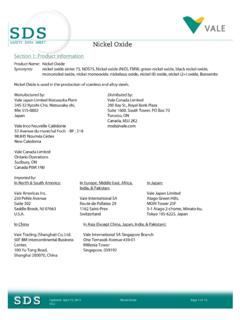 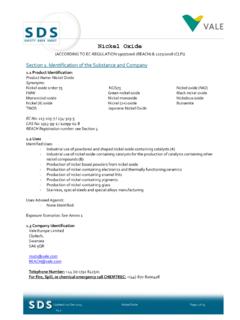 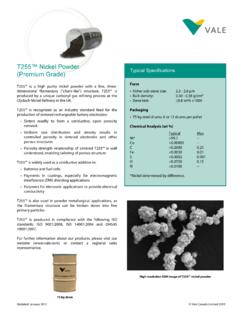 6 Significant estimates and judgements The preparation of the Report in accordance with the Act requires the use of judgments, estimates and 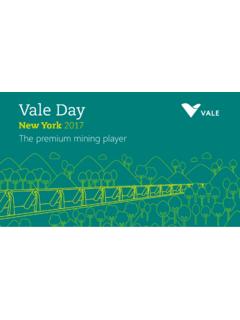 r “This presentation may include statements that present Vale's expectations about future events or results. All statements, when based upon 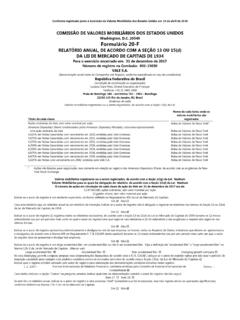 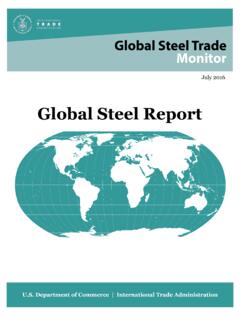 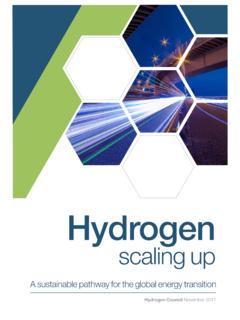 7 Executive summary The Hydrogen Council is the largest industry-led effort to develop the hydrogen economy. Launched in January 2017 at the World Economic Forum, its members include leading 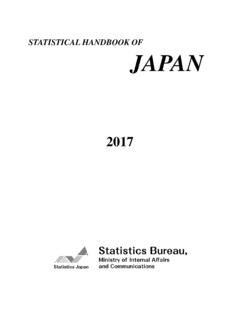 It provides statistical tables, figures, maps and photographs to portray conditions in modernday Japan from a variety of - perspectives, including demographics, economic and … 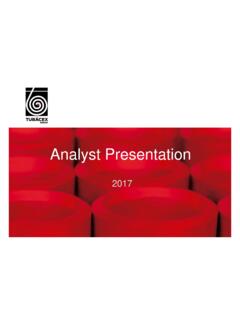 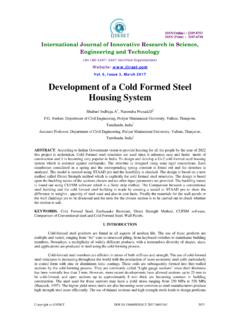 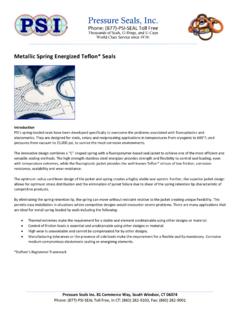