Valuation Of Intangibles And Trademarks—A …

The Profit- split Method Valuation Of Intangibles And Trademarks . A rehabilitation Of The Profit- split Method after uniloc By Christof Binder and Anke Nestler Introduction calculates its profitability A. profit- split analysis for a trademark or other before charges for the Christof Binder, PhD, MBA, intangible asset attempts to quantify what share subject IP, and then adds Trademark Comparables AG/. of the profit of the business is attributable to a reasonable IP charge the subject asset. Based on this asset-specific profit, to arrive at a comparable Markables, Partner profitability.

1 The Profit- split Method Valuation Of Intangibles And Trademarks . A rehabilitation Of The Profit- split Method after uniloc By Christof Binder and Anke Nestler Introduction calculates its profitability A. profit- split analysis for a trademark or other before charges for the Christof Binder, PhD, MBA, intangible asset attempts to quantify what share subject IP, and then adds Trademark Comparables AG/. of the profit of the business is attributable to a reasonable IP charge the subject asset. Based on this asset-specific profit, to arrive at a comparable Markables, Partner profitability.

2 Schwyz, Switzerland its value can be calculated. Despite the adverse uniloc decision of the Court of Appeals for the Federal The residual profit- E-mail: Circuit in 2011,1 profit- split is an important, if not split (RSPM) is a stepwise Anke Nestler, PhD, MBA. essential, element in the Valuation of Intangibles . approach to allocate profits In the wake of uniloc , the method needs not only a to different categories of Valnes Corporate Finance vindication, but also a refinement based on case-specific assets. It starts with routine GmbH, Partner, facts and data.

3 Purchase accounting data reported in contributions to assets that Frankfurt, Germany financial statements can provide both.* are easy to value, E-mail: Profit- split In a Nutshell tangibles or Intangibles with a typical return rate. The profit- split method is one of the oldest and Thereafter, the residual profit is allocated to the most frequently applied methods for the Valuation remaining special IP assets of the subject business. of intangible assets. Basically, profit- split attempts to allocate the total profit of a business to the different These three methods may sound simple, but in assets that contribute to it, including the subject practice they are much more complicated.

4 First, intangible. The key element of the profit- split method availability of data is limited. It is hard to find financial is the derivation of an appropriate or reasonable profit- reporting data for comparable businesses with split percentage based on which a part of the total comparable IP, let alone accounting data about their IP. profit is apportioned to the subject intangible. Further, there are no typical return rates for different classes of assets, at most for typical ranges of such Textbooks on IP Valuation suggest three different return rates.

5 Variants of the method to arrive at a profit- split According to the overall profit- split Another restriction of the method is that it is a method (OPSM) or contribution profit- split method, typical chicken-and-egg phenomenon. The concept of the combined profits earned by two parties from a dividing profits among assets is both the crux of the transaction ( a licensing transaction) are divided problem and its solution. If the value of the different between the two based on some allocation principle. assets and IPs was known, a profit allocation would not be needed.

7 Well, this is because *This article is based on an earlier version published in Valuation Strategies, Vol. 14, July-August 2015, and reprinted with permission. Valuation practice found two ways out of this dilemma. 1. uniloc USA, Inc. v. Microsoft Corp., 632 1292, ( , 2011). One is simplification, the other sophistication. 2. Gordon Smith and Russell Parr: Valuation of Intellectual Property The problem of non-availability of data was first and Intangible Assets, 3rd ed. (John Wiley & Sons, 2000) pages 401- circumvented by simplification, or the so-called 403; Emmanuel Llinares and Nihan Mert Beydilli: How to Determine rules of thumb.

9 The Profit- split Method profit of a business is attributable to its IP. During the approximately 20 percent. Mr. Goldscheider concluded course of time, the rule was extended to different that 5 percent was a healthy royalty rate, and I was ranges extending from 10 percent to 35 percent. interested to note that it usually constituted about 25. Further, the profit- split method was often downgraded percent of the profitability ultimately achieved by the to a secondary method used to corroborate or sanity various licensees. This finding was the starting point check the results of other primary Valuation methods .

10 For Mr. Goldscheider to investigate the influence of The good thing with this simplification was that actual or potential profitability of licensing transactions once the percentage range was commonly accepted on the setting of royalty rates. He observed similar its results were easy to comprehend for uninvolved patterns from later technology transfer and licensing recipients like auditors, judges or bankers. arrangements. A revenue treatment ratio of 3:1. On the other hand, the profit- split method became between the licensee's and the licensor's interests much more sophisticated through financial modeling. 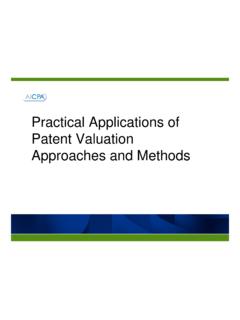 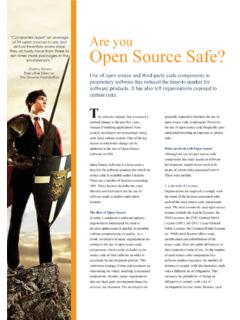 Are You Open Source Safe - i-runway.com

Are you Open Source Safe? Use of open source and third-party code components in proprietary software has reduced the time-to market for software products.