Variational formulation of general relativity from …

general relativity and Gravitation, VoL 14, No. 3, 1982. Variational formulation of general relativity from 1915 to 1925 "Palatini's Method" Discovered by einstein in 1925. M. F E R R A R I S and M. F R A N C A V I G L I A. Istituto di Fisica Matematiea dell'Universit~, via C. Alberto, l O- Torino, Italy C. REINA. Istituto di Fisiea dell'Universit~, via Celoria 16-Milano, Italy Received January 24, 1981, revised version received June 24, 1981. Abstract Among the three basic Variational approaches to general relativity , the metric-affine varia- tional principle, according to which the metric and the affine connection are varied inde- pendently, is commonly known as the "Palatini method." In this paper we revisit the history of the "golden age" of general relativity , through a discussion of the papers involving a Variational formulation of the field problem.

248 FERRARIS ET AL. self-consistent, covariant, and satisfactory formulation, thanks to the efforts of Einstein, Hilbert, and Lorentz.

1 general relativity and Gravitation, VoL 14, No. 3, 1982. Variational formulation of general relativity from 1915 to 1925 "Palatini's Method" Discovered by einstein in 1925. M. F E R R A R I S and M. F R A N C A V I G L I A. Istituto di Fisica Matematiea dell'Universit~, via C. Alberto, l O- Torino, Italy C. REINA. Istituto di Fisiea dell'Universit~, via Celoria 16-Milano, Italy Received January 24, 1981, revised version received June 24, 1981. Abstract Among the three basic Variational approaches to general relativity , the metric-affine varia- tional principle, according to which the metric and the affine connection are varied inde- pendently, is commonly known as the "Palatini method." In this paper we revisit the history of the "golden age" of general relativity , through a discussion of the papers involving a Variational formulation of the field problem.

2 In particular we find that the original Palatini paper of 1919 was rather far from what is usually meant by "Palatini's method," which was instead formulated, to our knowledge, by einstein in 1925. w Introduction According to standard methods in mathematical physics, one o f the more common procedures to derive einstein 's field equations for general relativity is to make use o f a suitable Variational principle. In recent years, the Variational approaches to general relativity have received renewed attention, especially owing to the attempts to construct consistent gauge theories o f gravitation. Motivated by this, we began investigating the sub- ject with the aim o f collecting, reviewing, and clarifying the role o f Variational principles in the theories o f gravitation. At the very beginning we have been faced with a historical problem concerning what is commonly known as "Pala- tini's Variational m e t h o d.

3 " Namely, we found that in the current fiterature there 243. 0001-7701/82 9 1982 Plenum Publishing Corporation 244 FERRARIS ET AL. are many papers in which the original results by Palatini are incorrectly quoted. This is most probably due to the fact that Palatini's paper is written in Italian and may be not easily accessible to the whole scientific community. 1. In looking for the sources of the confusion mentioned above, we found it interesting and stimulating to revisit the early developments of Variational prin- ciples in the "golden age" of general relativity ( , in the years from 1915 to 1925). Incidentally, this review will answer the question about who first formu- lated the so-called Palatini method. We understand that the priority problem has no relevance to the scientific progress in itself. However, it involves, as we shall see later, substantial problems which, in our opinion, deserve more careful attention.

4 W The ThreeKinds of VariationaIPrinciples Let us start with a short account on the framework in which the problem arises. Let M4 be a C ~ (Hausdorff, paracompact) differentiable manifold, endowed with a Lorentzian metric g and an affine torsionless connec- tion F. Let V be the covariant derivative with respect to P. Assume a Lagrangian density s is given in/144, depending on g, P, 0g, OF, and, possibly, on a cer- tain number of matter fields which we shall collectively denote by ~, together with their first derivatives 0r A metric-affine Variational principle consists of the following prescription: ~u(fs au)d4x) =0 (1). where the variation 6u is taken over the following set of independent variables: u = (g, r, ~) (2). The simplest relevant case is obtained by taking s (u, Ou)=g~3R~(F, or') [-det (gov)] 1/2 (3).

6 The method of treating the metric g and the connection P as independent variables [yielding, of course, 10 + 40 independent equations, like, , Equations (4) in the vacuum case] is exactly what is usually cited as "Palatini's Variational method". 3 How- ever, as we shall clarify later, Palatini was far from such a formulation . Although it is rather trivial, we stress that, in the metric-aft'me picture, no a priori relation can be imposed between g and F (and r too), since they have to be varied independently. In particular, one cannot take P to be the Levi-Civita connection of g, as it is sometimes erroneously assumed in literature. Actually, under this last assumption, one may rewrite s (g, P, OP; r ~r as a new density s ag, O2g; ~b, O~b)and the Variational prescription (1) should be replaced by the following: 6v(fs Ov,O2o)d4x)=O (5).

7 Where the variation 5v is taken over the set of independent variables v = (g, r (6). This prescription expresses what we should call a purely metric Variational principle. As an example, let us examine the vacuum case described by the Lagrangian: ,~M(O, OV, O2V)= R (g, ~g, OZg) [-get (g~r 1/2 (7). which is obtained from (3) by replacing P with the Levi-Civita connection 3'. ofg. Then, the Variational principle (5) yields exactly the ten vacuum einstein equations: G~f(g) = R~#(g) - 89gat3 [gZVRuv(g)] = 0 (8). [where Rccj(g) is the Ricci tensor of the Levi-Civita connection 3' of g]. In the framework of purely metric Variational principles, a slightly different viewpoint was assumed by Palatini in his original paper [4]. His ideas consist essentially in the following. Being 7(g, Og) a known function o f g and 0g, one first calculates the variation 67 as a function of the variation 6g and observes that it is a tensor.))]

9 einstein equa- tions (8) then follow as before. Remarkably enough, Equation (10) of Palatini's paper (as well as the method employed in [4] to obtain it) extends immediately to any affine torsiontess connection, s A third kind of Variational procedure consists of the so-called purely affine Variational principles. In these approaches one takes as independent variables the following quantities: w = (P, ~) (12). and gives accordingly a Lagrangian density s (I', OF; ~, ~ ) . The corresponding prescription is now aw(fs (w,aw)a4x) =0 (13). w(3): The HistoricatPerspective As early as 1914, well before the independent deduction by einstein and Hilbert of the final equations of einstein 's gravitational theory,6 it was clear to einstein and Grossmann that Variational principles should play an important role in setting up the theory (see [5]).

10 Lorentz [6], stimulated by a letter from einstein dated August 16, 1914,7. studied Hamilton's principle in general relativity both for particles and the electromagnetic field. He derived a formal covariant Variational procedure for the gravitational field itself in which the Lagrangian density was assumed to depend on g and ag, in a way which was left completely unspecified. SProvided one takes [4] .8 as the direct definition of the variation. 6 See [7], p. 25. 7 See [7], p. 43. "PALATINI'S METHOD" DISCOVERED BY einstein 247. The crucial period for the formulation of the theory was, as is well known, the fall o f 1915. In his first note [8], presented on November 4, 1915, einstein derived a preliminary incomplete set of equations, obtaining them from a purely metric Variational principle. However, the treatment was not satisfactory, since the coordinate condition [I det (g) l] ~/2 = 1 was assumed and, moreover, the Lagrangian was not generally covariant. 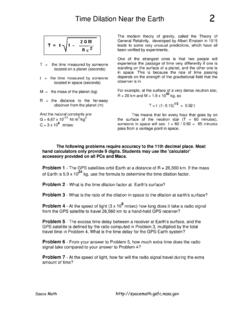 Time Dilation Near the Earth 2 The modern theory of gravity, called the Theory of General Relativity, developed by Albert Einstein in 1915 leads to some very unusual predictions, which have all 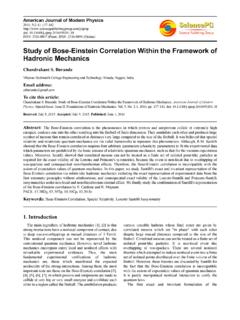 Study of Bose-Einstein Correlation Within the …

ALBERT EINSTEIN 99 bulldog tenacity of purpose, and an openness to try any route to the summit. Who does not know Einstein's definition of a scientist as "an unscrupulous opportunist;"* or his words on 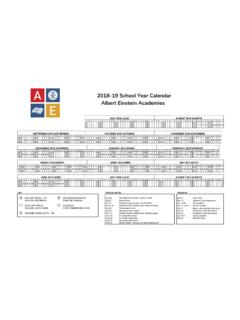 Albert Einstein: Religion and Science common cause in their own interests. The social impulses are another source of the crystallization of religion. 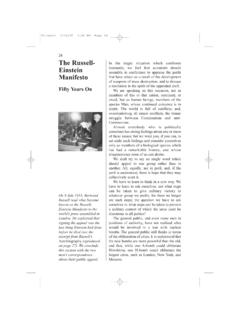 The Russell-Einstein Manifesto No doubt in an H-bomb war great cities would be obliterated. But this is one of the minor disasters that would have to be faced. 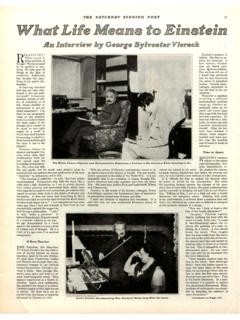 THE SRTURDRY EVENING POST 17 RELATI VITY! What word II more lIymbolic of theage? Wehllvecea&ed to be positive of any· thing. We look upon all things in the light of