3 Pharmacokinetics: In healthy adults treated with intravenous doses of Venofer , its iron component exhibits first order kinetics with an elimination half-life of 6 h, total clearance of L/h, non-steady state apparent volume of distribution of L and steady state apparent volume of distribution of L. Since iron disappearance from serum depends on the need for iron in the iron stores and iron utilizing tissues of the body, serum clearance of iron is expected to be more rapid in iron deficient patients treated with Venofer as compared to healthy individuals. The effects of age and gender on the pharmacokinetics of Venofer have not been studied.

4 Venofer is not dialyzable through CA210 (Baxter) High Efficiency or Fresenius F80A High Flux dialysis membranes. In in vitro studies, the amount of iron sucrose in the dialysate fluid was below the levels of detection of the assay (less than 2 parts per million). Distribution: In healthy adults receiving intravenous doses of Venofer , its iron component appears to distribute mainly in blood and to some extent in extravascular fluid. A study evaluating Venofer NDA 21-135/S-017 Page 4 containing 100 mg of iron labeled with 52Fe/59Fe in patients with iron deficiency shows that a significant amount of the administered iron distributes in the liver, spleen and bone marrow and that the bone marrow is an iron trapping compartment and not a reversible volume of distribution.

5 Metabolism and Elimination: Following intravenous Administration of Venofer , iron sucrose is dissociated into iron and sucrose by the reticuloendothelial system. The sucrose component is eliminated mainly by urinary excretion. In a study evaluating a single intravenous dose of Venofer containing 1,510 mg of sucrose and 100 mg of iron in 12 healthy adults (9 female, 3 male: age range 32-52), of the sucrose was eliminated in urine in 4 h and in 24 h. Some iron also is eliminated in the urine. Neither transferrin nor transferrin receptor levels changed immediately after the dose Administration [1]. In this study and another study evaluating a single intravenous dose of iron sucrose containing 500-700 mg of iron in 26 anemic patients on erythropoietin therapy (23 female, 3 male; age range 16-60), approximately 5% of the iron was eliminated in urine in 24 h at each dose level [2].

7 Iron is essential to the synthesis of hemoglobin to maintain oxygen transport and to the function and formation of other physiologically important heme and non-heme compounds. Most dialysis patients require intravenous iron to maintain sufficient iron stores. Six clinical trials were conducted to assess the safety and efficacy of Venofer . Five studies were conducted in the United States (516 patients) and one was conducted in South Africa (131 patients). Study A: Hemodialysis Dependent-Chronic Kidney Disease (HDD CKD) Study A was a multicenter, open-label, historically-controlled study in 101 hemodialysis patients (77 patients with Venofer treatment and 24 in the historical control group) with iron deficiency anemia.

8 Eligibility for Venofer treatment included patients undergoing chronic hemodialysis three times weekly, receiving erythropoietin, hemoglobin concentration greater than and less than g/dL for at least two consecutive weeks, transferrin saturation < 20%, and serum ferritin < 300 ng/mL. The mean age of the patients in the treatment group was 65 years with the age range being 31 to 85 years of age. The erythropoietin dose was to be held constant throughout the study. The protocol did not require Administration of a test dose; however, some patients received a test dose at the physician s discretion. Exclusion criteria included significant underlying disease, asthma, active inflammatory disease, or serious bacterial or viral infection.

9 Venofer 5 mL containing 100 mg of elemental iron was administered through the dialysis line at each dialysis session either as slow injection or a saline diluted slow infusion for a total of 10 dialysis sessions with a cumulative dose of 1,000 mg elemental iron. A maximum of 15 mLs (300 mg of elemental iron) of Venofer was administered per week. NDA 21-135/S-017 Page 5 No additional iron preparations were allowed until after the Day 57 evaluation. The mean change in hemoglobin from baseline to Day 24 (end of treatment), Day 36, and Day 57 was assessed. The historical control population consisted of 24 patients with similar ferritin levels as patients treated with Venofer , who were off intravenous iron for at least 2 weeks and who had received erythropoietin therapy with hematocrit averaging 31-36 for at least two months prior to study entry. 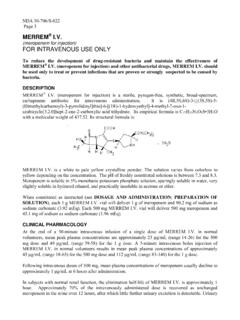 FOR INTRAVENOUS USE ONLY - Food and Drug …

NDA 50-706/S-022 Page 3 MERREM® I.V. (meropenem for injection) FOR INTRAVENOUS USE ONLY To reduce the development of drug-resistant bacteria and maintain the effectiveness of

Drug, Food, Food and drug, Only, Intravenous, For intravenous use only 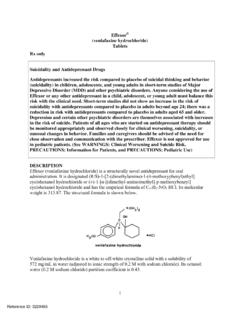 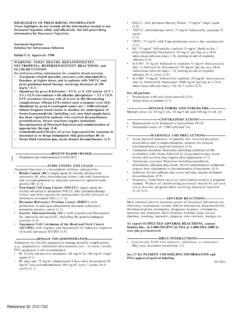 Docetaxel Injection in combination with doxorubicin and cyclophosphamide is indicated for the adjuvant treatment of patients with operable node-positive breast cancer. 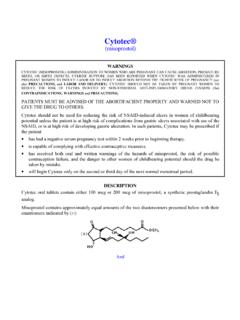 cytotec® (misoprostol) warnings cytotec (misoprostol) administration to women who are pregnant can cause abortion, premature birth, or birth defects. 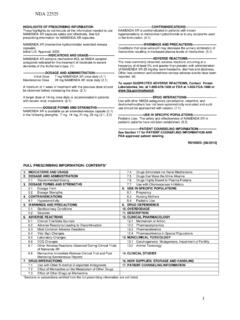 The most commonly observed adverse reactions seen in patients administered NAMENDA XR in the controlled clinical trial, defined as those occurring at a frequency of at least 5% in the 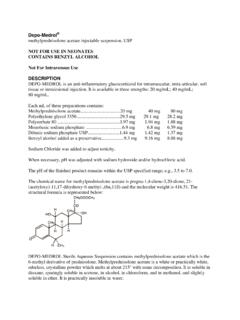 NOT FOR USE IN NEONATES CONTAINS BENZYL …

Depo-Medrol® methylprednisolone acetate injectable suspension, USP NOT FOR USE IN NEONATES CONTAINS BENZYL ALCOHOL . Not For Intravenous Use . DESCRIPTION 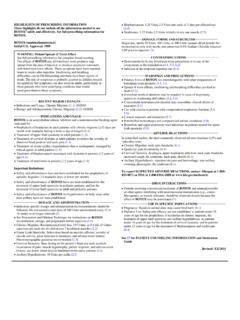 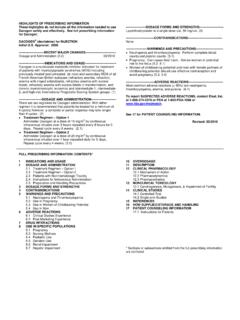 Dacogen is indicated for treatment of patients with myelodysplastic syndromes (MDS) including previously treated and untreated, de novo and … 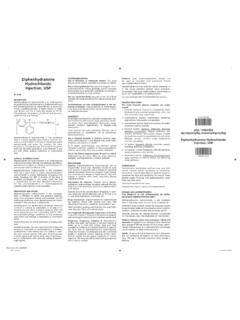 HOW SUPPLIED Diphenhydramine Hydrochloride Injection, USP is a clear and colorless solution available as: 50 mg/mL in a 1 mL prefilled single-use syringe. 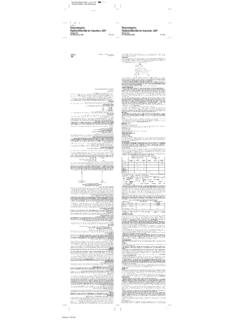 bacterial infection, patients should be told that although it is common to feel better early in the course of therapy, the medication should be taken exactly as directed. 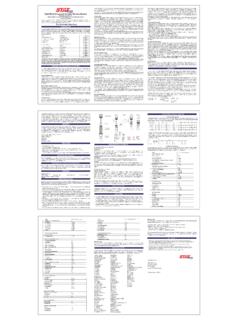 BARBITURATES (BAR) For Forensic Use Only - …

Drug, Forensic, Only, Barbiturates, For forensic use only 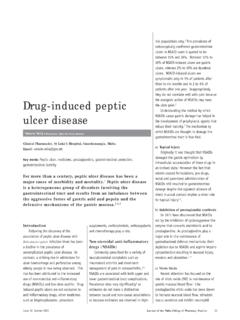 18 Journal of the Malta College of Pharmacy Practice Issue 10 Summer 2005 risk situations such as the presence of motility disorders or concurrent use of NSAIDs or anticoagulants.25 In a …

1 HIGHLIGHTS OF PRESCRIBING INFORMATION These highlights do not include all the information needed to use CRESEMBA® safely and effectively. See full prescribing information …