Video Games 0 LAY 4 HAT #AN $O 3 ERIOUS 'OOD. s Adam Eichenbaum Daphne Bavelier C. Shawn Green The authors review recent research that reveals how today's Video Games instanti- ate naturally and effectively many principles psychologists, neuroscientists, and educators believe critical for learning. A large body of research exists showing that the effects of these Games are much broader. In fact, some types of commercial Games have been proven to enhance basic perceptual and cognitive skills. These effects are significant enough that educators use these Games for such practical, real-world purposes as training surgeons and rehabilitating individuals with per- ceptual or cognitive deficits. Although many individuals may still consider Video Games nothing more than mindless fun, the authors argue that Games serve also as serious tools for good.

1 Video Games 0 LAY 4 HAT #AN $O 3 ERIOUS 'OOD. s Adam Eichenbaum Daphne Bavelier C. Shawn Green The authors review recent research that reveals how today's Video Games instanti- ate naturally and effectively many principles psychologists, neuroscientists, and educators believe critical for learning. A large body of research exists showing that the effects of these Games are much broader. In fact, some types of commercial Games have been proven to enhance basic perceptual and cognitive skills. These effects are significant enough that educators use these Games for such practical, real-world purposes as training surgeons and rehabilitating individuals with per- ceptual or cognitive deficits. Although many individuals may still consider Video Games nothing more than mindless fun, the authors argue that Games serve also as serious tools for good.

2 Key words: job training and Video Games ; Video Games and cognition; Video Games and learning; Video Games and the elderly Over the last half-century, Video Games have evolved from crude contests played by a few enthusiasts to richly immersive worlds enjoyed by bil- lions of people around the world. Games have become big business, bringing in more than sixty billion dollars in global revenue annually (Gaudiosi 2012). They are increasingly recognized as an artistic medium too, as institutions such as the Museum of Modern Art (Antonelli 2012), the Smithsonian (Smithso- nian 2012), and The Strong feature them. Moreover, Games have evolved as novel and effective teaching tools (Gee 2003, 2005; Gentile and Gentile 2008). Today's Video Games are much more than simple entertainment.

3 They also fight against declining mental capacities in old age, promote job-related skills, and offer models of how to teach children complex tasks and abilities. In hindsight, this may not be surprising. Video game sales thrive because of good advertising, their ready availability in the market, and their relationships to other, familiar game forms. But Video Games also prosper because players find them enjoyable. The fun in playing Video Games depends largely on the Games ' effectiveness in teaching players to 50. American Journal of Play, volume 7, number 1 The Strong Contact C. Shawn Green at Video Games 51. succeed. More impressively, Video Games need to teach players to succeed on a set of tasks that are initially quite difficult. Consumers would not want to play Video Games they have already mastered from the start; nor would they want to play Video Games they can never master.

4 Essentially, a game designer needs to ensure that players do fail (if they always succeed, there is nothing to learn) but that this failure does not seem insurmountable, that it even seems fun (Juul 2013). As we present in this article, modern Video Games instantiate and dem- onstrate many key principles that psychologists, educators, and neuroscientists believe enhance learning and brain plasticity. This, in turn, has led some sci- entists to consider the possibility that Video game play may produce not just improvements in the ability to play the Games but may, in fact, result in more fundamental changes in the way players see the world and process information. It has also led to a burgeoning field that uses Video Games even those designed purely for entertainment in a variety of practical applications, from training individuals with cognitively and perceptually demanding jobs ( , military pilots and endoscopic surgeons) to rehabilitating individuals with deficits in particular types of visual or cognitive processing ( , individuals with amblyo- pia or with dyslexia).

5 In all, what began as simple play has become something with significant real-world relevance. What Makes Games Effective Teaching Tools? Whether by careful design or simple trial-and-error, modern Video Games have come to incorporate many of the best practices known to those interested in learning. This starts with creating an environment that encourages users to invest substantial amounts of time in learning. As every educator knows full well, one of the best predictors of learning is time on task (Greenwood, Hor- ton, and Utley 2002). With all other things being held equal, more hours spent on a task means more learning, and, clearly, Video Games excel at encouraging players to put time on task. Recent surveys suggest that the average player vol- untarily spends between ten and fifteen hours a week gaming (Rideout, Foehr, and Roberts 2010).

6 If only high school students could be convinced to volun- tarily spend that amount of time on their studies! Although the reasons Games produce such dedication are myriad, many at their root relate to reinforce- ment. Like all animals, humans are wired to perform those actions that result in some reward or fulfill some basic need. Indeed, behavioral research shows that 52 AMERICAN JOURNAL OF P L AY s FALL 2014. Games are capable of providing a variety of basic psychological needs. These include autonomy (the belief that one has control over his or her own actions and decisions), competence (the belief that one has the level of skill necessary to achieve goals), and relatedness (the feeling that one is socially connected with other human beings) (Przybylski, Rigby, and Ryan 2010).

7 Research shows that our brains release in abundance neurochemicals related to reward processing for example, dopamine when individuals play Video Games . These are the same chemicals the brain releases when a hungry or thirsty person receives food or water, as well as when someone takes one of the many commonly abused drugs. In fact, the magnitude of the dopamine release related to playing electronic Games resembles that related to some recreational drug use (Koepp et al. 1998). Critically, these same brain chemicals prove essen- tial in permitting brain plasticity and thus learning (Bao et al. 2001). To some extent, we could consider the release of these reward chemicals as a signal to other parts of the brain that an important event has occurred, one that neces- sitates reorganization to increase the likelihood that the future rewards of the event will also be received.

8 However, reinforcement alone may not be sufficient to explain the extreme levels of time on task that Games produce. Timing, too, is crucial: reinforcement must come at proper intervals and in proper relationship to in-game events. Well over half a century ago, psychologists demonstrated that animals work hardest and longest when they are rewarded in a way that makes them believe there is always a chance their next action will reward them ( , a variable ratio-reward schedule). Because the individual never knows exactly when the next reward will come, he or she is strongly motivated to keep at the task. Many Video Games enhance this effect by layering multiple reward schedules. Therefore, even if one reward is far away, another is almost certainly approaching ( , I may need to find one hundred more gold coins to buy the new suit of armor, but I am only two animal furs away from being able to trade for the new sword).

9 The amount of time on task that playing Games encourages will ensure ample opportunity to learn the game skills needed for mastery. Good Video Games make certain that the player has acquired a sufficient level of expertise in each and every element before administering any cohesive assessment, such as a final boss encounter similar to the concept of the spiral curriculum in educational psychology (Bruner 1960). Reaching this point of practice beyond perfection (or overlearning) is highly linked to overall retention levels and the ability to access information at a later time (Willingham 2004). Video Games 53. However, time on task can only go so far in stimulating learning if the tasks themselves are poorly structured. All good Video Games incorporate one crucial learning principle: a proper level of difficulty.

10 If individuals find a learning task too easy, they will not make enough errors to necessitate improvements ( , if you make no mistakes, you have nothing to learn). Conversely, if they find a learning task too difficult, the error signals can be uninformative and thus again, they will not learn anything ( , a first-grade student would learn very little about quantum physics by receiving graduate-level feedback on exams). Educational psychologists have long believed that the most effective learning paradigms keep individuals right at the edge of their ability in something they call the zone of proximal development (Vygotsky 1978). In this dynamic pro- cess, the game designer carefully determines the initial level of difficulty of the game and increases it as the individual player improves. 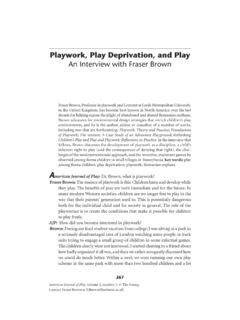 Playwork, Play Deprivation, and Play 269 not incompatible with free play. Once you have spent time with children sitting round a campﬁre, you realize that most of … 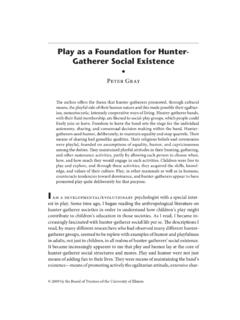 Play as a Foundation for Hunter- Gatherer Social …

ing, and relative peacefulness for which hunter-gatherers are justly famous and upon which they depended for survival. In this article, I present evidence from 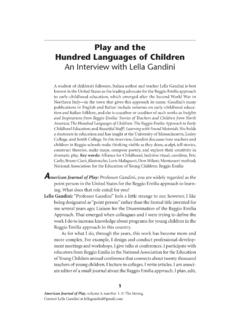 Play and the Hundred Languages of Children An …

Play and the Hundred Languages of Children 3 with the teachers, and with the environment is also considered essential in supporting learning. Furthermore, in Reggio the creative element of

More Play, Please The Perspective of Kindergarten Teachers on Play in the Classroom • M•€†‚ƒ L„ƒ…† †e past decade has seen an increase in research documenting the bene‡ts of

Party Games Here is a list of over 200 fabulous party games to choose from. There are also games listed below that are designed to help … 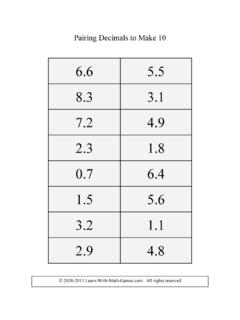 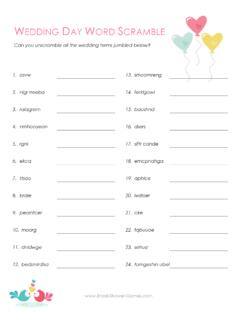 www.Bridal-Shower-Games.com WEDDING DAY WORD SCRAMBLE Can you unscramble all the wedding terms jumbled below? 1. … 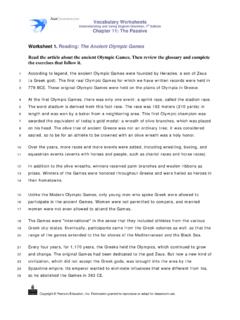 The original site of Olympia remained until it was destroyed by an earthquake in the 6th century CE. The games, which had been banned …