WARREN PUMPS . Pressure Pulsations Generated by centrifugal PUMPS By Thaddeus F. Wnek Noise Test Engineer. WARREN PUMPS Inc. WARREN , Massachusetts Along with new requirements for pumping machinery, there Foreword appeared new terms dealing with Pressure Pulsations which, to With the introduction of increasingly higher speed papermaking many, were unfamiliar. The following paragraphs of this article will machinery, it became increasingly important to use pumping not only acquaint the reader with terminology related to Pressure equipment which exhibits low Pressure pulsation characteristics in Pulsations , but will also describe some of the characteristics and the associated hydraulic system.

1 WARREN PUMPS . Pressure Pulsations Generated by centrifugal PUMPS By Thaddeus F. Wnek Noise Test Engineer. WARREN PUMPS Inc. WARREN , Massachusetts Along with new requirements for pumping machinery, there Foreword appeared new terms dealing with Pressure Pulsations which, to With the introduction of increasingly higher speed papermaking many, were unfamiliar. The following paragraphs of this article will machinery, it became increasingly important to use pumping not only acquaint the reader with terminology related to Pressure equipment which exhibits low Pressure pulsation characteristics in Pulsations , but will also describe some of the characteristics and the associated hydraulic system.

3 Very severe and cause damage to the piping or other components in In a centrifugal pump a Pressure pulse is developed as each a hydraulic system. However, in some cases, as in modem rotating vane passes the cutwater or diffuser vane reaching a papermaking systems, even apparently minor Pressure variations maximum value when the vane tip passes this point. When the vane cannot be tolerated because of their detrimental effect on the tip is adjacent to the cutwater, the maximum amount of energy in operation of certain equipment in the system, primarily the the form of liquid in motion is directed toward the discharge nozzle. headbox. Obviously then, the severity of Pressure Pulsations cannot At any other point between vane tips, the opening between the vane be determined merely by their presence or even magnitude, but and cutwater is larger and, consequently, some of the liquid (and rather by their effect upon system components or operations.)

4 Inherent energy) "slips by" under the cutwater and is recirculated There is no pulseless pump. Regardless of the type, all PUMPS through the pump. The change from minimum to maximum transfer have Pressure Pulsations to some degree because of changes, of energy to the discharge nozzle results in a corresponding change discontinuities and/or variations that occur in their pumping or or variation in the discharge Pressure which constitutes a Pressure Pressure generating action. A single acting reciprocating pump is a pulsation. The magnitude or, as it is commonly called, the good example of discontinuity in pumping action. When the amplitude of the Pressure pulsation is directly related to the amount plunger reverses direction at the end of its discharge stroke, there is of difference between the maximum and minimum 'slip," or the a cessation of Pressure generation for the duration of the return or distance between the impeller vane tips and the cutwater.

5 Pressure Pulsations have two important characteristics: frequency and amplitude. Both of these must be known in order to evaluate and solve pulsation problems. Frequency per revolution. For a particular impeller with an odd number of Frequency is defined as the number of recurrences of a periodic vanes, this would result in a vane frequency that is two times higher phenomenon in a unit of time, revolutions per minute, cycles than what it would be with a single volute pump. If in the example per second, etc. In the case of Pressure pulsation measurements, of the impeller contained an even number of vanes, regardless of primary interest is the number of pulses occurring per second.

6 Whether the pump had a dual volute or single volute, the frequency Although pulses per second is more descriptive of the phenomenon, would remain the same. This is because, with an even number, hertz, which is cycles per second, is the commonly used term. impeller vanes would be diametrically opposite and, as the cutwaters are also diametrically opposite, two impeller vanes would The vane frequency is the basic frequency Generated by a be adjacent to the two cutwaters at the same time. Therefore, both centrifugal pump. As stated previously, there is a pulse Generated impeller vanes would generate a pulse at the same time. Although each time a vane tip passes the cutwater. If there are seven in this instance the frequency is not altered with a dual volute, the (rotating) vanes in the impeller and one (stationary) cutwater, for magnitude of the Pressure pulsation would be greater than what it each complete revolution of the impeller seven vane tips pass the would be with the same impeller in a single volute pump.

7 For this cutwater or there would be seven pulses per revolution. If it took reason, an odd number of impeller vanes should always be one second for the impeller to complete one revolution, the vane considered in a dual volute pump. passing frequency would be seven hertz. The equation for determining the impeller vane passing frequency is: With a diffuser pump, because there are many stationary points to consider, the situation becomes more complex; and it becomes somewhat more difficult to avoid having more than one impeller vane and cutwater or diffuser adjacent at any one time. Simply where: choosing an odd number of impeller vanes no longer proves f1~p= Impeller Vane Passing Frequency (hertz) satisfactory in all cases.

8 As a rule, it is best to choose values which Total Number of Vanes in the Impeller are prime numbers and different for the impeller and diffuser vanes. Siv = Speed of the Impeller (revolutions per minute) With a diffuser pump or any multiple cutwater pump, the basic impeller vane frequency is referred to as the vane rate frequency The above equation is used to determine the basic pulsation frequency for a single cutwater pump. If there is more than one cutwater (or if the pump has diffusers), each impeller vane will pass each (stationary) cutwater as it rotates, generating a pulse each and the equation for calculating this frequency is: time. Obviously, the equation must take into account the additional where: stationary points.

9 For example, in a dual volute pump with two f1~= Impeller Vane Rate Frequency (hertz). cutwaters, each impeller vane would pass a (stationary) cutwater Niv = Total Number of Impeller Vanes twice for each complete revolution, thereby generating two pulses Ndv = Total Number of Diffuser Vanes Siv Speed of the Impeller (revolutions per minute). CF = Highest Common Factor of Niv and Ndv Amplitude The amplitude of a Pressure pulse is a measure of the maximum amount by which the Pressure varies from the average or steady- state value. The amplitude may be expressed in various ways. A. common unit of measurement is pounds per square inch (psi), peak- to-peak, which represents the total Pressure variation.

10 The amplitude can also be expressed as psi, peak, or psi, root-mean-square (rms). The latter term is also referred to as the effective value because it represents the value of a varying condition which is equivalent to a steady -state condition. All of these terms are mathematically related, and it is a simple matter to convert from one to the other. Figure 1 illustrates graphically and mathematically the relationship between all three terms. Another unit used in measuring the magnitude of Pressure Pulsations is the decibel (dB) or more specifically the press- -9. sure decibel (pdB). The decibel is a dimensionless unit expressing a dynes per square centimeter (RMS) which is equivalent to logarithmic ratio between two quantities, one the measured pounds per square inch (peak-to-peak). 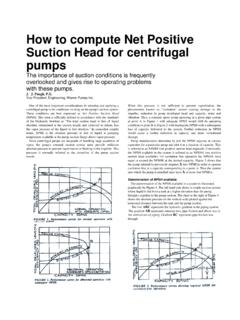 How to compute Net Positive Suction Head for … 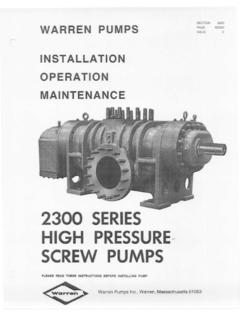 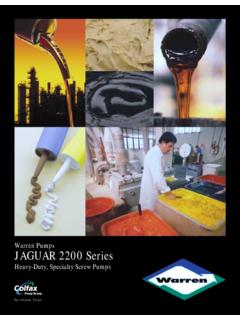 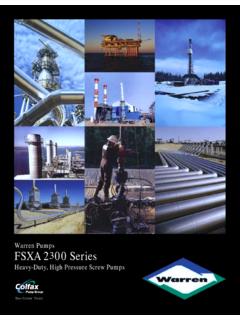 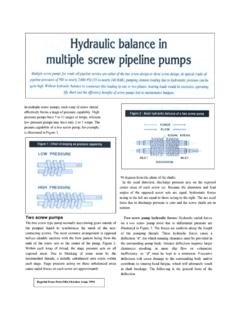 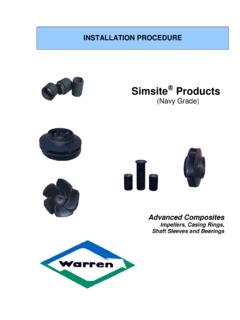 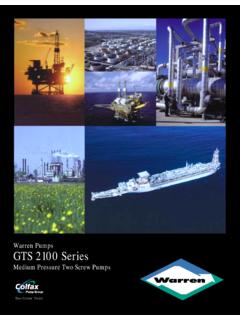 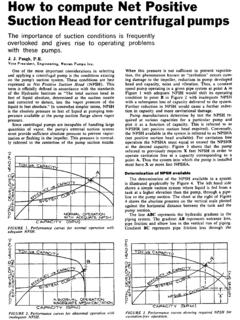 horizontal run of piping. Together they represent the loss in the total available suction head from the tank to the pump suction. The distance DE … 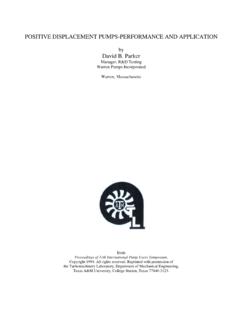 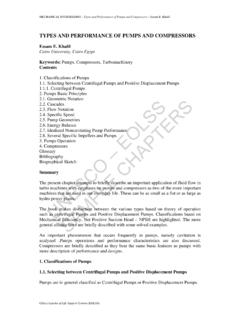 Types and Performance of Pumps and Compressors

UNESCO – EOLSS SAMPLE CHAPTERS MECHANICAL ENGINEERING – Types and Performance of Pumps and Compressors – Essam E. Khalil ©Encyclopedia of Life Support Systems (EOLSS) 1.1.1. Centrifugal Pumps The centrifugal pump produces a head and a flow by increasing the velocity of the 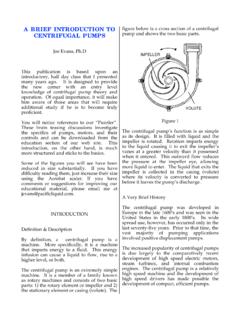 A BRIEF INTRODUCTION TO CENTRIFUGAL PUMPS

A BRIEF INTRODUCTION TO CENTRIFUGAL PUMPS Joe Evans, Ph.D This publication is based upon an introductory, half day class that I presented many years ago. 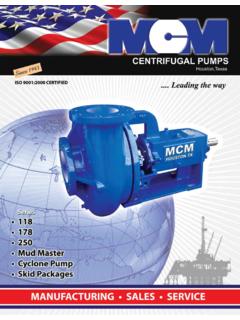