Water Quality Criteria and Standards for …

INTRODUCTION In 2004, capture fisheries and aquaculture have supplied the world with 106 million tons of food fish (FAO, 2006). Of this, 43% came from aquaculture.

3 Within the growing aquaculture industry, it is accepted that good Water Quality is needed for maintaining viable aquaculture production. Poor Water Quality can result in low profit, low product Quality and potential human health risks. Production is reduced when the Water contain contaminants that can impair development, growth, reproduction, or even cause mortality to the cultured species. Some contaminants can accumulate to the point where it threatens human health even in low quantities and cause no obvious adverse effects. The fish perform all its physiological activities in the Water breathing, excretion of waste, feeding, maintaining salt balance and reproduction.

4 Thus, Water Quality is the determining factor on the success or failure of an aquaculture operation. The continued degradation of Water resources due to anthropogenic sources necessitates a guideline in selecting sites for aquaculture using Water Quality as a basis. This paper reviews the Water Quality Standards set by different countries. Each parameter is provided with basic information and a scientific basis for each value set as standard. It aims to provide useful information on Water Quality Standards that the Philippine government and aquaculture operators can adapt, with a primary objective of promoting higher production yield, better product Quality , and with a minimum impact to the environment.

5 The information contain here is limited to available literatures and country Standards . Moreover, the Standards set by the ASEAN are still at interim stage. Cultured species as well as production system may not all be covered. Physical Parameters pH. The term pH was originally derived from a French word, pouvoir hydrog ne , which means hydrogen power . This parameter shows the quantity of hydrogen ions (H+) in the Water . The scale for measuring the degree of acidity is called the pH scale, which ranges from 1 to 14. At 25 0C, pH of will be considered neutral, neither acidic nor basic, while values below are considered acidic, and above are basic.

6 Natural waters range between pH. and pH while seawater is near pH A pH meter is an electronic instrument used to measure the pH of a liquid, and typically it consists of a special measuring probe (a glass electrode) connected to an electronic meter that measures and displays the pH reading. The pH is interdependent with other Water Quality parameters, such as carbon dioxide, alkalinity, and hardness. It can be toxic in itself at a certain level, and also known to influence the toxicity as well of hydrogen sulfide, cyanides, heavy metals, and ammonia (Klontz, 1993).

7 The pH can also affect fish health. For most freshwater species, a pH range between - is ideal, but most marine animals typically cannot tolerate as wide range pH as freshwater animals, thus the optimum pH is usually between pH and (Boyd, 1998). Below pH , some species experience slow growth (Lloyd, 1992). At lower pH, the organism's ability to maintain its salt balance is affected (Lloyd, 1992) and reproduction ceases. At approximately pH or below and pH 11 or above, most species die (Lawson, 1995). Table 1 shows the effects of different pH levels to warm Water pond fish, while Table 2 shows the recommended value for salmonid aquaculture production.

8 Table 1. pH tolerance levels and its effect on aquaculture pH levels Effects on warm Water pond fish < Acid death point No production - Desirable range for fish production - Slow growth > Alkaline death point Source: Lawson 1995, Tarazona and Munoz 1995. The pH of pond Water increases daily as phytoplankton consume carbon dioxide during photosynthesis (reaching a maximum value near 6 PM), and decreases at night as they release carbon dioxide during respiration (reaching a minimum value near 6 AM). Indirectly, changes in pH can also affect aquatic organisms. In fish ponds, the low pH levels can accelerate the release of metals from rocks and sediments.

9 These metals can affect the metabolism of the fish and its ability to take up Water through the gills. Moreover, low pH can reduce the amount of dissolved inorganic phosphorous and carbon dioxide available for phytoplankton during photosynthesis. Ponds with low pH values (< 5) receiving acid rain, mine acid drainage or acidic swamp Water can be improved by liming. On the other hand, high pH. levels, can make the toxic form of ammonia become more prevalent, and the phosphate, which is commonly added as a fertilizer, can rapidly precipitate (Boyd, 1990). Table 2. Ideal pH levels for salmonid culture Recommended range of pH levels for fish production.

10 Source: Lawson 1995, Tarazona and Munoz 1995. Table 3 shows the different range of pH some countries are implementing. Generally, all countries use an average range of between and in freshwater, and and for marine, all of which are within the limits of optimum fish production. Table 3. Acceptable pH levels for fish production Country Freshwater Marine Water Reference Australia - - ANZECC, 2000. Brunei Darussalam PWD. Canada CCME, 1994. Hong Kong EPD, 1999. India Kenya EMCR, 2006. Malaysia - - New Zealand ANZECC, 2000. Philippines - - DAO 1990-34. Total Alkalinity In aquaculture , alkalinity is the measure of the capacity of Water to neutralize or buffer acids using carbonate, bicarbonate ions, and in rare cases, by hydroxide, thus protecting the organisms from major fluctuations in pH.

The State of World Fisheries and Aquaculture 2014

2014 The State of World Fisheries and Aquaculture Opportunities and challenges FOOD AND AGRICULTURE ORGANIZATION OF THE UNITED NATIONS Rome, 2014

The State of World Fisheries and Aquaculture 2016 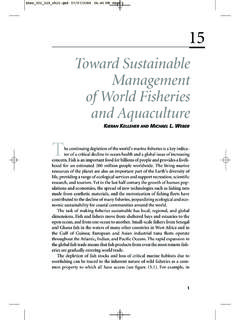 Toward Sustainable Management of World …

1 15 Toward Sustainable Management of World Fisheries and Aquaculture KIERAN KELLEHER AND MICHAEL L. WEBER T he continuing depletion of the world’s marine ﬁsheries is a key indica-

AGRICULTURE AND RURAL DEVELOPMENT Seventy-five percent of the world’s poor live in rural areas and most are involved in agriculture. In the 21st century, agriculture remains fundamental to economic growth, poverty alleviation, and environmen-