Candito 6 Week Strength ProgramCreated By Jon CanditoBefore I get into the program, I d like to thank you for supporting Candito it is by donating or simply liking a video, each action helps the mission of advocatingstrength Training without gimmicks possible. Now with that said, let s delve into the methodologyof the Weekly SetupWeek 1 Muscular ConditioningWeek 2 HypertrophyWeek 3 Linear Max OTWeek 4 Heavy Weight Acclimation/ExplosivenessWeek 5 Intense Strength TrainingWeek 6 Deload (optional)Note There is an option to max out on the 6th week, which will then call for a 7th week to be added as the deloadto end the that is the program broken down into a focus from week to week.

May 26, 2013 · Setup Within Week ­ Upper/Lower Split This is an extremely important aspect of the program. A 5 day bodybuilding split is NOT optimal for natural bodybuilders. And most certainly not optimal for athletes looking to develop strength. Upper/lower splits allow for a greater emphasis on compound movements, which ...

1 Candito 6 Week Strength ProgramCreated By Jon CanditoBefore I get into the program, I d like to thank you for supporting Candito it is by donating or simply liking a video, each action helps the mission of advocatingstrength Training without gimmicks possible. Now with that said, let s delve into the methodologyof the Weekly SetupWeek 1 Muscular ConditioningWeek 2 HypertrophyWeek 3 Linear Max OTWeek 4 Heavy Weight Acclimation/ExplosivenessWeek 5 Intense Strength TrainingWeek 6 Deload (optional)Note There is an option to max out on the 6th week, which will then call for a 7th week to be added as the deloadto end the that is the program broken down into a focus from week to week.

2 This is calledperiodization. Some people say that periodization is just for advanced lifters, but the truth is thatperiodization is optimal for beginners as well. The benefit from periodizing rather than just doingstraight sets (5x5), is that you prevent weaknesses before they can begin. Plateaus are besthandled by preventing them in the first place! Also, the specific weights along with varying repranges greatly improve focus for beginners. You won t psyche yourself out by comparing eachworkout to the last every single week. You will never be unsure of what weights to use, which isoften the cause for weeks of no progress.

3 You will be on a long term path for consistent you have to do is follow the plan as formulated for you, and just lift the weights!It is also crucial to understand that each phase effects the other. The Hypertrophy phasewill also make you much stronger. The strength phase is going to build muscle as well. Thefact is with natural athletes, strength and muscle mass go hand in hand. If you focus only on lowrep strength development, injuries are much more likely to occur. And if you focus only highreps, there will be a great deal of total body stimulation being missed. This program is also builtwith the bigger picture in mind.

4 So the transition from each phase is taken into Within Week Upper/Lower SplitThis is an extremely important aspect of the program. A 5 day bodybuilding split is NOToptimal for natural bodybuilders. And most certainly not optimal for athletes looking to developstrength. Upper/lower splits allow for a greater emphasis on compound movements, whichstimulates your body to produce more testosterone than isolation exercises. Also, the quality ofeach set will be far greater in an upper/lower split . 5 day splits have far too much volume perworkout. By the 18th chest set, how strong are you really?

5 Now compare that to an upper/lowersplit where you come in fresh, slam 3 4 sets of bench and move on. This helps for injuryprevention as well because you will use better form having shorter, more goal oriented one advantage the 5 day split would appear to have is volume, but then the upper/lower splitallows for 2 3 upper days a week. So the volume ends up being about the same, of much higherquality Vs Lower FrequencyThis is an issue you can t solve through research. It only comes through experience. Ihave found that the upper body can handle a much greater frequency than the lower body. Fullbody movements like the squat and deadlift can be very taxing, not just on your CNS but alsopsychologically.

6 I always say there is no such thing as an easy squat. So I d rather squat withhigh intensity than underperform while using a high volume. Now compare the feeling aftersquats to the feeling after Training biceps, abs, or calves. The smaller range of motionmovements tend to be much easier to recover from. Obviously the bench press is still acompound movement, but it is clear the feeling is entirely different in comparison to is vital to keep in mind that the tradeoff between frequency and intensity is always anissue to balance. If you are going to lift upper body 3 times in one week (as the first weekrequires), then the intensity simply cannot be extremely high every workout.

7 Later on in thetraining program, the upper days are spaced out and only twice a week. This is because afterthe base of volume has been built, the high intensity sessions require a decrease in volume(both daily and weekly).Now some of you may know that many olympic lifters squat everyday. I always keeplower Training between 1 2 times a week because the way I train is with extreme intensity, andhigher volume per workout (both squats and deadlifts together). I have seen olympic lifters trainpersonally and was a bit surprised at the lack of intensity going into squats. It is just a differentmentality.

8 This is largely because the squat is an accessory lift in olympic weightlifting. It is justa tool to develop the clean & jerk and snatch. Also much of the culture of the sport has beeninfluenced by top lifters who train while using performance enhancing drugs. This allows forquicker recovery obviously. Then the last point is that olympic lifters often are willing to put theirbodies on the line. My Training has not only allowed me to squat 3 times my bodyweight withoutthe use of drugs, but also completely avoid any injuries while doing Within WorkoutThe upper/lower split allows for a focus on the most effective exercises.

9 There is nopoint in wasting your time doing exercises which are simply inferior. The problem is people dosubstitute exercises added on for the sake of volume. If you can squat deep, there is no point indoing a leg press afterwards! The leg press is just useful as a substitute for if you have a badback for example. However, a proper accessory movement would be incline chest flys. Youmay think I would think such an exercise is silly since it wont build strength, but it offerssomething the bench press doesn t. It focuses on the upper chest and takes the triceps out ofthe movement. So if a lifter has a lagging upper chest, and perhaps his triceps are overpoweringhis chest, then this could be a great addition to the end of a workout.

10 It wouldn t be an adequatemain accessory however in this program, it would be a possible optional Body Main AccessoriesYou can see on the spreadsheet, the program calls for 3 additional required exercises tothe bench press for upper body days. You need to pick an exercise for the upper back,shoulders, and biceps. Some ask why I dont emphasize the triceps if I do so for the the issue is that your triceps simply get worked far greater in pressing movements thanyour biceps do in pulling movements. If you were to do heavy dumbell rows, your biceps are notgoing to be very sore. However, if you bench press and then do dumbell overhead pressafterwards, additional tricep work will almost always be overkill. 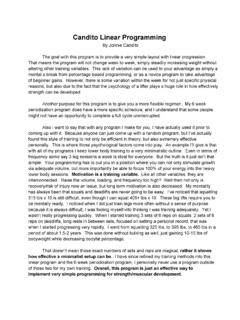 Candito Linear Programming By Jonnie Candito The goal with this program is to provide a very simple layout with linear progression.

THE ULTIMATE GUIDE TO BUILDING MUSCLE - …

create a personalized training split that works for your schedule and goals. Bodybuilding.com’s senior content editor Bill Geiger recommends these two splits in the article “5 Foolproof Steps to Elite Muscle Growth.” However you arrange them, stick with the …

within your training split has been strategically structured to ﬁne-tune your physique for extreme mass building and strength gains. Jay Cutler – With the goal at a young age to be one of the largest bodybuilding competitors ever, Jay certainly achieved this by winning the coveted title of Mr. Olympia 4 different times, not to mention his

Arnold had a similar set-up and split for years, but when he needed a boost or when he needed to jump start some muscle growth, he would sub in one or two of these methods. This keeps things fresh, gives a great pump, keep you motivated and intense in the gym while yielding some new gains as well. 1-10 METHOD 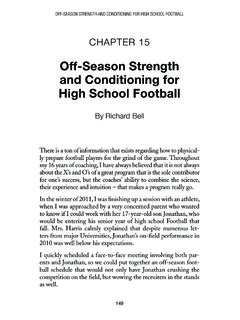