WHA Global Nutrition Targets 2025: 3. Low Birth Weight policy Brief TARGET: 30% reduction of low Birth weight WHO/Pallava Bagla What's at stake In 2012, the World Health Assembly Resolution endorsed a Comprehensive implementation plan 2. on maternal, infant and young child nutrition1, which specified six Global Nutrition Targets for 2025 . This policy brief covers the third target: a 30% reduction of low Birth weight. The purpose of this policy brief is to increase attention to, investment in, and action for a set of cost-effective interventions and policies that can help Member States and their partners in reducing rates of low Birth weight.

Oct 22, 2014 · What’s at stake In 2012, the World Health Assembly Resolution 65.6 endorsed a Comprehensive implementation plan on maternal, infant and young child nutrition1, which specified six global nutrition targets for 20252.This policy brief covers the third target: a 30% reduction of low birth weight.The purpose of this policy

1 WHA Global Nutrition Targets 2025: 3. Low Birth Weight policy Brief TARGET: 30% reduction of low Birth weight WHO/Pallava Bagla What's at stake In 2012, the World Health Assembly Resolution endorsed a Comprehensive implementation plan 2. on maternal, infant and young child nutrition1, which specified six Global Nutrition Targets for 2025 . This policy brief covers the third target: a 30% reduction of low Birth weight. The purpose of this policy brief is to increase attention to, investment in, and action for a set of cost-effective interventions and policies that can help Member States and their partners in reducing rates of low Birth weight.

2 Low Birth weight (LBW) is defined by the World mortality and morbidity, but recent studies have Health Organization (WHO) as weight at Birth less found that low Birth weight also increases the risk than 2500 g ( lb). Low Birth weight continues for noncommunicable diseases such as diabetes and 4,5. to be a significant public health problem globally cardiovascular disease later in life . and is associated with a range of both short- and long-term consequences. Overall, it is estimated There is considerable variation in the prevalence of that 15% to 20% of all births worldwide are LBW, low Birth weight across regions and within countries.

3 Representing more than 20 million births a year. The however, the great majority of low Birth weight goal is to achieve a 30% reduction of the number of births occur in low- and middle-income countries 6,7. infants born with a weight lower than 2500 g by the and especially in the most vulnerable populations . 1. year 2025 . This would translate into a relative Regional estimates of LBW include 28% in south reduction per year between 2012 and 2025 and a Asia, 13% in sub-Saharan Africa and 9% in Latin reduction from approximately 20 million to about 14 America (see Table 1).

4 It is worth noting that these million infants with low weight at Birth . rates are high, in spite of the fact that the data on LBW remain limited or unreliable, as many deliveries Preterm Birth is the most common direct cause of occur in homes or small health clinics and are not 3. neonatal mortality . Every year, million babies reported in official figures, which may result in an die from complications of preterm Birth . Low Birth underestimation of the prevalence of LBW. weight is not only a major predictor of prenatal To improve maternal, infant and young child Nutrition Nevertheless, low Birth weight is a Global concern, in the highest socioeconomic positions are more likely as some high-income countries are also faced with to receive adequate health care with care standards high rates for their contexts ( Spain, the United similar to those in high-income countries.)

5 Therefore, Kingdom of Great Britain and Northern Ireland [UK] identifying populations at greatest risk of low Birth 3. and the United States of America [USA]) . Currently, a weight, as well as those that are most likely to face high percentage of infants are not weighed at Birth , barriers in access to health and Nutrition interventions, especially in low-income countries, presenting a is a Global priority and fundamental for the success of significant policy challenge (see Table 1). There is also large-scale programmes. substantial intra-country variation.

7 Diabetes and high blood pressure . The consequences preterm neonates (born before 37 weeks of gestation), of low Birth weight include fetal and neonatal small for gestational age neonates at term and the mortality and morbidity, poor cognitive development overlap between these two situations preterm, 4. and an increased risk of chronic diseases later in life . small for gestational age neonates, who typically have This policy brief aims to highlight effective actions to the worst outcomes. These three groups have their reduce the incidence of low Birth weight.

8 Own subgroups, with individual components linked to different causative factors and long-term effects, and distributions across populations that depend on 4,10,11. the prevalence of the underlying causal factors . Understanding and differentiating the various categories and their subgroups is an essential first step 12-14. in preventing these conditions . a Classification of countries according to the United Nations Statistical Division8. b Regional aggregates are presented where adequate population coverage is present, based on available data 2008 2012.

9 C Excludes China (United Nations Children's Fund [UNICEF] estimate, as of February 2014)9. Source: UNICEF data (2014). Nutrition : low Birth weight9. 2. It has been reported that preterm small for gestational the type of effective nutritional intervention that needs age Birth is associated with medical conditions to be introduced immediately in populations with 16. related to chronic hypertension and pre-eclampsia/ low calcium intakes . Reducing the incidence of low 15. eclampsia . The presentation of pre-eclampsia Birth weight requires a comprehensive Global strategy, highlights the complex interactions that exist between which must include multiple elements: improving Nutrition , preterm Birth and small for gestational maternal nutritional status; treating pregnancy- age.

10 Pre-eclampsia, which only occurs in pregnancy, associated conditions such as pre-eclampsia; and is associated with both preterm Birth (spontaneous providing adequate maternal care, perinatal clinical or induced due to severe disease) and small for services and social support. gestational age, owing to reduced placental function, which includes poorer transfer of nutrients to the Actions to drive progress in reducing low fetus. The mother's nutritional status also alters her risk Birth weight of pre-eclampsia. Based on the results of a large trial Affordable, accessible and appropriate health care is conducted by the WHO, which has been confirmed by critical for preventing and treating low Birth weight. 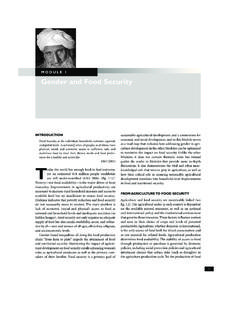 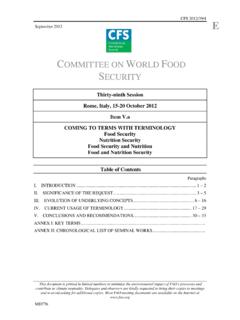 4 CFS 2012/39/4 III. EVOLUTION OF UNDERLYING CONCEPTS 6. The basic concepts underlying the terms “food security” and “nutrition security” as we know

3 Literature by Anderson (1990) sees it fit to distinguish between food security at national and household level. This distinction is crucial since the approach to assess food security

DEVELOPING THE KNOWLEDGE, SKILLS AND …

developing the knowledge, skills and talent of youth to further food security and nutrition 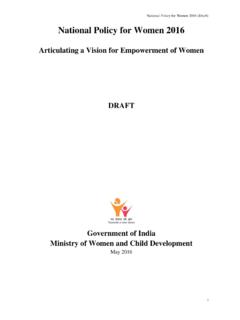 National Policy for Women 2016 (Draft) 1 1. INTRODUCTION 1.1 Empowerment of women is a socio-political ideal envisioned in relation to the wider 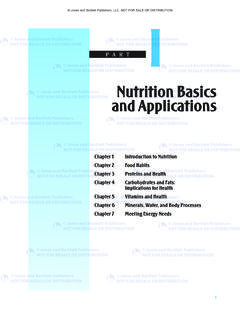