2 If the testosterone surge doesn't happen, the female brain continues to grow The female brain sprouts more connections in the communication areas and areas that process emotion Women are more talkative than men -Brizendine, 2006. Female and Male Brain Under fMRI scan, we can see differences in female vs male brains . WOMEN: Language and hearing brain centers: women have 11% more neurons than men The hippocampus (hub of emotion and memory formation) is larger in women Circuitry for language and observing emotion in others is larger in women Women (on ave) are better at expressing emotion and remembering details of emotional events -Brizendine, 2006.

7 Progesterone Allopregnanolone (ALLO). soothing, like Valium ALLO= a neuroactive metabolite of progesterone and works on GABA (gamma-aminobutyric acid). receptors in the brain Hence, ALLO is a powerful anxiolytic, anticonvulsant, and anesthetic agent which decreases anxiety and depression. Barbituates, benzodiazepines and EtOH also work at this receptor. -Griffin, 1999. PMDD. Progesterone Allopregnanolone (ALLO). soothing, like Valium -Prozac, Paxil and Zoloft were found not only to increase Serotonin, but also to increase ALLO production by activating 2 enzymes (lowering their Km, activation of energy) that convert progesterone to ALLO.

8 -Imipramine (Tofranil) had no effect on ALLO production. Journal: -Lisa Griffin, MD, PhD and Synthia Mellon, PhD. Selective serotonin reuptake inhibitors directly alter activity of neurosteroidogenic enzymes. Proc Natl Acad Sci U S A. 1999 Nov 9;96(23):13512-7. Menstrual Cycle Estrogen / E2 Progesterone Testosterone Follicular Luteal Phase Phase PMDD. Possible Treatments Hormones: Start an OCP, or change to one with a progesterone good for mood Take OCP continuously Women are sensitive to hormones in different ways . some to the hormone fluctuation, some to the amount, and some to the progestin type SSRI's: Either 7-10 days before menses to help boost ALLO, or daily if also depressed Which birth control pill is good for mood?

9 Lower progestin potency: Ortho Evra patch Necon 1/35. Ovcon 35 Alesse Ortho-TriCyclen Levlite Othro-Cyclen Tri-Levlen Brevicon Triphasil Modicon Trivora Which birth control pill is good for mood? Women are sensitive to hormones in different ways some to the progestin, some to the amount and some to the hormonal fluctuation. Seasonale, or any monophasic oral contraceptive pill (OCP) taken continuously (having only 1 period every 3 months) can also help stabilize mood. Of note, YAZ is the only OCP given an indication for PMDD. However, it has a high progestin potency and may not be ideal for every woman.

10 YAZ shortens the placebo week from the regular 7. days to 4 days to minimize the time of hormonal fluctuation. Women who are sensitive to hormonal fluctuation should avoid triphasic OCP's. Which birth control pill is good for mood? Bottom line: Treatment needs to be individualized for each patient and trial and error may be necessary. It takes about 2 cycles to see if a certain OCP. will work for a woman or not. Evidence based studies comparing one OCP to another are lacking. Disorders with Premenstrual Exacerbation (PME). Affective disorders Substance abuse Anxiety disorders Migraine Allergies Psychotic disorders Asthma Eating disorders Seizures Personality disorders Male/Female Differences in Mood Disorders 2:1 ratio worldwide female greater than male 165 cultures, ratio varies from :1 up to :1. 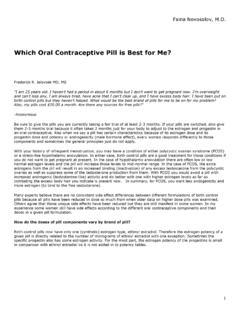 Which Oral Contraceptive Pill is Best for Me? - …

1 Faina Novosolov, M.D. Which Oral Contraceptive Pill is Best for Me? Frederick R. Jelovsek MD, MS "I am 25 years old. I haven't had a period in about 6 months but I don't want to get pregnant now. 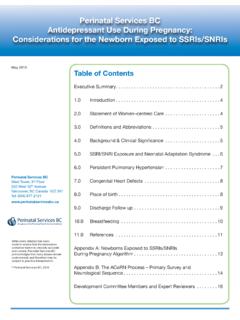 Perinatal Services BC Antidepressant Use During …

May 2013 Perinatal Services BC Antidepressant Use During Pregnancy: Considerations for the Newborn Exposed to SSRIs/SNRIs While every attempt has been 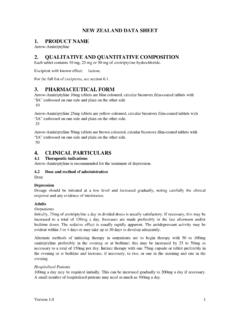 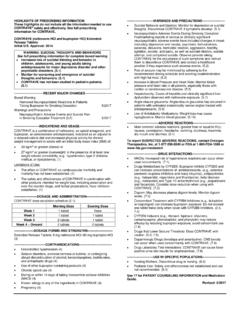 HIGHLIGHTS OF PRESCRIBING INFORMATION . These highlights do not include all the information needed to use CONTRAVE ® safely and effectively. See full prescribing