WOUND CARE TERMINILOGY . ORGANIZATION FOR WOUND CARE NURSES | Abscess: Accumulation of pus enclosed anywhere in the body. Abrasion: Wearing away through some mechanical process such as friction or trauma. Angiogenesis: The process of producing blood vessels during the granulation phase of WOUND healing. Autolysis: The process of breakdown down of dead tissue or devitalized tissue with the use of enzymes. Atrophie blanche: Atrophic (thin) skin with ivory-white, depressed, discolored tissue with red dots of the dermal capillaries, typically seen around the ankles. May arise within the fibrotic area of lipodermatosclerosis and doesn't represent a healed ulcer.

1 WOUND CARE TERMINILOGY . ORGANIZATION FOR WOUND CARE NURSES | Abscess: Accumulation of pus enclosed anywhere in the body. Abrasion: Wearing away through some mechanical process such as friction or trauma. Angiogenesis: The process of producing blood vessels during the granulation phase of WOUND healing. Autolysis: The process of breakdown down of dead tissue or devitalized tissue with the use of enzymes. Atrophie blanche: Atrophic (thin) skin with ivory-white, depressed, discolored tissue with red dots of the dermal capillaries, typically seen around the ankles. May arise within the fibrotic area of lipodermatosclerosis and doesn't represent a healed ulcer.

2 Bioburden: Dead cells and fluid that collects between dressing changes and needs cleaning off the WOUND bed to allow healing. The burden caused by bacteria in the WOUND competing for oxygen and nutrients. Biofilm: Polysaccharide matrix formed by organisms on surface of WOUND . Provides protection (think happy little bacteria community). Blanching: The reddened area that becomes white with pressure applied. Cellulitis: Inflammation or infection of skin cells that cause redness, heat, pain and edema. Charcot: A condition from diabetes where the bones in the feet dislocate, deform or fracture cause the bottom of the foot to have the appearance of the hull of the boat related to the arch collapsing.

3 Claudication: Cramping leg pain with exercise, such as walking, from ischemia of the leg muscle groups. Results from proximal narrowing of the arterial tree associated with PAD. Exercising muscles need more oxygen than resting muscles. In persons with PAD, these muscles don't get the extra oxygenated blood that they need, leading to tissue ischemia and pain. Claudication resolves with rest. Clean WOUND : Free of devitalized tissue, purulent drainage and debris. Collagen: The protein that is the main component of many major parts of the body and WOUND healing. 1. WOUND CARE TERMINILOGY . ORGANIZATION FOR WOUND CARE NURSES | Colonized: Presence of replicating bacteria in or around the WOUND bed; no local or systemic effects.

4 No antibiotics please. Contamination: Introduction of non-replicating organisms into WOUND . Contraction: Bringing together of WOUND edges causing the WOUND size to become smaller. It is important to measure wounds to show healing or deterioration over time. Critical colonization: Organisms on surface of WOUND , but in high enough numbers that microbial load has stalled healing process. Communicating veins: Veins that connect to other veins within the same anatomic plane. For example, a vein that connects the superficial greater saphenous vein medially to the superficial lesser saphenous vein laterally.

5 Dead space: Defect or cavity that can result in abscess formation. Debridement: Removal of foreign material and devitalized or contaminated tissue from a WOUND until healthy tissue is exposed. Dehiscence: Separation of WOUND edges. Denudement: Loss of epidermis. Detrition: The mechanical process of wearing away by friction. Epibole: Non-healing wounds with closed, rolled WOUND edges. Two layers of epidermis have rolled down to cover lower layers. Halts the migration of epithelial cells into the WOUND bed. Epidermis: Outermost layer of skin. Erode: Loss of epidermis. Erythema: Increased redness, often the first sign of infection.

6 Redness of the skin cause by vasodilation. Eschar: Necrotic tissue, usually black or brown. Can be hard and dry or soft and boggy; thick, leathery black crust. Non-viable tissue that is colonized with bacteria. Excoration: Linear scratches on skin. 2. WOUND CARE TERMINILOGY . ORGANIZATION FOR WOUND CARE NURSES | Exudate: Fluid from the WOUND that can be serous, sanguineous or purulent. Fibrin: A protein involved in the clotting process required in the granulation phase of healing. Fascia: Connective tissue that covers muscle and found throughout the body. Fibroblast: An important cell used in WOUND healing.

7 Friable tissue: The tissue that bleeds easily and can indicate infection. Friction: Rubbing that causes mechanical trauma to the skin. Full thickness: Tissue damage extends through dermis into subcutaneous tissue. Can include muscle, fascia and bone. Granulation tissue: Formation of red, healthy connective tissue with good blood flow in a full thickness WOUND that will continue to heal. Can appear as red and cobblestoned. Growth factors: Proteins that are used to bring cells to an area as well as create other proteins used in WOUND healing. Hemosiderin staining: Permanent brown staining to lower leg to indicate venous disease.

8 It is caused by the release of iron from disintegrate red blood cells. Classic sign of venous stasis changes. Discoloration of soft tissue caused by localized erythema and superficial erosions. Hydrophilic: Attracting moisture. Induration: An abnormal firmness or thickness with definite margins palpated under skin, often surrounding a WOUND or localized injury. Infected: Invasion of organisms into tissue and systemic response noted. Overgrowth of microorganisms in sufficient quantities to overwhelm the body's defenses. Start antibiotics. Hint: Chronic wounds may not exhibit classic signs of infection.

9 Look for increased pain or drainage, odor and delayed healing. Interigo: A mild inflammatory process caused by moisture and skin-to-skin friction. Often seen in skin folds and characterized by the breakdown of red blood cells resulting in hyper-pigmentation of the skin. 3. WOUND CARE TERMINILOGY . ORGANIZATION FOR WOUND CARE NURSES | Intermittent claudication: Pain related to poor or compromised blood supply. The pain is acute when walking and decreases with rest. Increase in pain often happens with leg elevation. Ischemia: The loss or deficiency of blood to an area. Lesion: Broad term referring to wounds and sores.

10 Lipodermatosclerosis: A skin and connective tissue disease that is inflammation of the fat layer of the epidermis. A change in the skin of the lower legs, resembling an inverted bowling pin or champagne bottle, common in patients with chronic venous insufficiency (CVI). A constricted area of adherent fibrotic subcutaneous tissue and skin. More proximal to his narrowing is a swollen area of the leg caused by CVI and edema. Maceration: The whiteness and loss of intact skin around WOUND margins as a result of dressing not able to pull or control excess fluid. Skin damage caused by moisture. Softening of tissue by soaking in fluids (can look like dishpan hands ). OASIS : M1020/1022/1024. Diagnosis, Symptom Control, and Payment Diagnosis. List each diagnosis for which the patient is receiving home care and enter is ICD-9-CM code at the level of highest specificity. How to document wounds and bruises - Emergency …

Misc. documentation: Bite marks usually consist of semi-circular arches or patterned bruises/abrasions. May have a discernible dentition pattern. Try not to interpret the wound but just describe the appearance. Abrasions results in injury to the superficial (epidermis) layer of the skin by pressure and movement applied simultaneously.

Document, Wound, Bruises, How to document wounds and bruises the back of her legs and bruises on her buttocks. The mother is unable to provide an explanation for the injuries CPS cases • must rise to the level of child abuse as per the Child Protective Services Law (CPSL) • require investigation . 01. Introduction. SECTION 1: Law. Bruises: Sprains: Strains: Snow Sports Scout's Name: _____ Snow Sports - Merit Badge Workbook Page. 3 of 18 Tell how to apply splints. 2. Do the following: a. Explain why every snow sport participant should be prepared to render first aid in the event of an accident. b. Explain the procedure used to report an accident to the local ski patrol ... 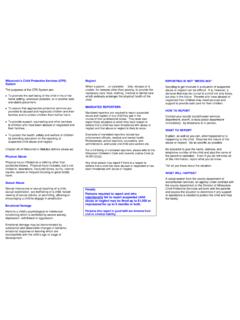 It shouldn't hurt to be a child - Wisconsin

• Bruises, welts on face, neck, chest, back • •Injuries in the shape of object (belt, cord) • Unexplained burns on palms, soles of feet, back • •Fractures that do not fit the story of how an injury occurred • Delay in seeking medical help • Extremes in behavior: very aggressive or withdrawn and shy

Child, Ruth, Wisconsin, Hurt to be a child, Bruises • There was no abusive bruises? Fractures: • The injury does not show any callus formation? • Posterior pareital fractures are common in children under the age of two? • There was no injury to the brain? This would indicate the fracture is not severe? • No fracture, on it's own, can be used to diagnose child abuse? Retinal Hemorraghes: What are Anticoagulants and Antiplatelet Agents?

• You often find bruises or blood blisters. • You have an accident, such as a bump on the head, a cut that won’t stop bleeding or a fall of any kind. What should I know about antiplatelet agents? Antiplatelets keep blood clots from forming by keeping blood platelets from sticking together.

How to document wounds and bruises, Bruises, And bruises, Snow Sports, Hurt to be a child, Wisconsin, California