Your, Practices, Your practice on ine

2 Bones 4. b. Fibrous Tissue 2. Indications 7. 3. Knee Arthroscopy 8. a. Arthroscopy 8. b. Surgical Procedure c. Post-op Care 9. d. Points of Interest 12. 4. Conclusion 15. your Practice On ine KNEE ARTHROSCOPY. Multimedia Health Education INTRODUCTION. The knee is essentially made up of four bones. The femur or thighbone is the bone connecting the hip to the knee. The tibia or shinbone connects the knee to the ankle. The patella (kneecap) is the small bone in front of the knee and rides on the knee joint as the knee bends. The fibula is a shorter and thinner bone running parallel to the tibia on its outside. The joint acts like a hinge but with some rotation. The knee is a synovial joint, which means it is lined by your Practice Online synovium. The synovium produces fluid lubricating and nourishing the inside of the joint.

3 Articular cartilage is the smooth surfaces at the end of the femur and tibia. It is the damage to this surface which causes arthritis. your Practice On ine KNEE ARTHROSCOPY. Multimedia Health Education Section: 1 NORMAL KNEE. a. Bones Femur The femur (thighbone) is the largest and the strongest bone in the body. It is the weight bearing bone of the thigh. It provides Femur attachment to most of the muscles of the knee. (Refer fig. 1). Condyle (Fig. 1). The two femoral condyles make up for the rounded end of the femur. Its smooth articular surface allows the femur to move easily over the tibial (shinbone) Condyle meniscus. (Refer fig. 2). Tibia The tibia (shinbone), the second largest bone in the body, is the (Fig. 2). weight bearing bone of the leg. The menisci incompletely cover the superior surface of the tibia where it articulates with the femur.

4 The menisci act as shock absorbers, protecting the articular surface of the tibia as well as assisting in rotation of the knee. (Refer fig. 3) Tibia (Fig. 3). your Practice On ine KNEE ARTHROSCOPY Multimedia Health Education Section: 1/cont. NORMAL KNEE. Fibula The fibula, although not a weight bearing bone, provides attachment sites for the Lateral collateral ligaments (LCL) and the biceps femoris tendon. The articulation of the tibia and fibula also allows a slight degree of movement, providing an element of flexibility in response Fibula to the actions of muscles (Fig. 4). attaching to the fibula. (Refer fig. 4). Patella The patella (kneecap), attached to the quadriceps tendon above and the patellar ligament below, rests against the anterior Patella articular surface of the lower end of the femur and protects the knee joint.

5 The patella acts as a fulcrum for the quadriceps by holding the quadriceps tendon (Fig. 5). off the lower end of the femur. (Refer fig. 5). your Practice On ine KNEE ARTHROSCOPY. Multimedia Health Education Section: 1/cont. NORMAL KNEE. Menisci The medial and the lateral meniscus are thin C-shaped layers of fibrocartilage, incompletely covering the surface of the tibia where it articulates with the femur. The majority of the meniscus has no blood supply and for that reason, when damaged, the meniscus is unable to undergo the normal healing process that occurs in the rest of the body. In addition, a meniscus begins to deteriorate with age, often developing degenerative tears. Typically, when the meniscus is damaged, the torn pieces begin Menisci to move in an abnormal fashion inside the joint. The menisci act as shock (Fig.)

6 6). absorbers protecting the articular surface of the tibia as well as assisting in rotation of the knee. As secondary stabilizers, the intact menisci interact with the stabilizing function of the ligaments and are most effective when the surrounding ligaments are intact. (Refer fig. 6). your Practice On ine KNEE ARTHROSCOPY. Multimedia Health Education Section: 1/cont. NORMAL KNEE. b. Fibrous Tissue Anterior Cruciate Ligament (ACL). The anterior cruciate ligament (ACL) is the major stabilizing ligament of the knee. The ACL is located in the center of the knee joint and runs from the femur Anterior cruciate (thigh bone) to the tibia (shin bone), through the center of the ligament knee. The ACL prevents the femur from sliding backwards on the tibia (or the tibia sliding forwards on the femur). Together with the posterior cruciate ligament (PCL), ACL (Fig.

7 7). stabilizes the knee in a rotational fashion. Thus, if one of these ligaments is significantly damaged, the knee will be unstable when planting the foot of the injured extremity and pivoting, causing the knee to buckle and give way. (Refer fig. 7). Posterior Cruciate Ligament Posterior cruciate (PCL). ligament Much less research has been done on the posterior cruciate ligament (PCL) because it is injured far less often than the ACL.(Refer fig. 8). (Fig. 8). your Practice On ine KNEE ARTHROSCOPYM ultimedia Health Education Section: 1/cont. NORMAL KNEE. The PCL prevents the femur from moving too far forward over the tibia. The PCL is the knee's basic stabilizer and is almost twice as strong as the ACL. It provides a central axis about which the knee rotates. Now click on Collateral Ligaments. Collateral Ligaments Collateral Ligaments prevent hyperextension, adduction, and abduction Superficial MCL (Medial Collateral Ligament).

9 The symptoms of a torn cartilage include Pain over the torn area inner or outer side of the knee Knee swelling Reduced motion Locking if the cartilage gets caught between the femur and tibia Articular Cartilage(Surgery) Injury If the surface cartilage is torn, this is most significant as a major shock- absorbing function is compromised. Large pieces of articular cartilage can float in the knee (sometimes with bone attached) and this causes locking of the joint and can cause further deterioration due to the loose body floating around the knee causing further wear and tear. Most surface cartilage wear will ultimately lead to osteoarthritis. Mechanical symptoms of pain and swelling due to cartilage peeling off can be helped with arthroscopic surgery. The surgery smoothes the edges of the surface cartilage and removes loose bodies.

10 your Practice On ine KNEE ARTHROSCOPY. Multimedia Health Education Section: 1/cont. INDICATIONS. Cruciate Ligament Injuries Rupture of the Anterior (rarely the posterior) Cruciate Ligament (ACL) is a common sporting injury. Once ruptured the ACL. does not heal and usually causes knee instability and the inability to return to normal sporting activities. An ACL reconstruction is required and a new ligament is fashioned to replace the ruptured ligament. This procedure is performed using the (Fig. 10). arthroscope.(Refer fig. 10). Patella (knee-cap) disorders Arthroscopy is sometimes useful in the treatment of patello- femoral problems of the knee. Looking directly at the articular cartilage surfaces of the patella and the patello-femoral groove is the most accurate way of determining how much wear and tear there is in these areas.

Your, Practices, Section, Your practice on ine 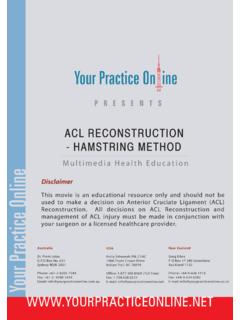 Your, Practices, Mailed, Your practice on ine 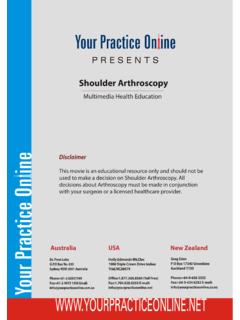 A User's Guide to: Knee injury and Osteoarthritis …

The Guide to Rehabilitation of Anterior Cruciate …

5 FLYING There is no universal agreement as to when it is safe to travel by plane after an ACL reconstruction. It seems that most Orthopaedic Surgeons advise their

WWW.YOURPRACTICEONLINE.NET This movie is an educational resource only and should not be used to make a decision on Anterior Cruciate Ligament (ACL)

Arthroscopic Rotator Cuff Repair Postoperative Rehab Protocol . Starting the first day after surgery you should remove the sling 3-4 times per day to 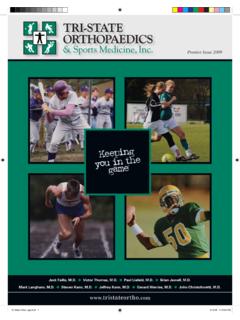 reconstruction are to restore joint anatomy, provide static and dynamic stability, and expeditious return to all physical activities with minimal 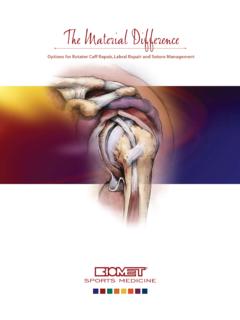 EWA ROOS 5 Knee injury and knee OA Knee osteoarthritis is common. Joint disease, causing pain and functional limita-tions, is the most common chronic disease in the elderly, more common than