A Billion Voices - WHO

DOCUMENT AS OF 25 AUG 2005 Healthier people in healthier environments. WHO Kobe Centre, Japan 2005 1 A Billion Voices: Listening and Responding to the Health Needs

2 1. WHO Kobe Centre, Japan 2005. DOCUMENT AS OF 25 AUG 2005. TABLE OF CONTENTS. Section I: A close look at urban slums, poverty and ill-health in the 21st century ..3. New urban settings 3. Rapid urbanization 3. The urbanization of poverty ..4. Globalization as a driver or rapid urbanization and urban poverty .. 5. Health inequity in urban settings ..6. Structural determinants .6. Intermediate determinants ..7. Slums as a failure of governance ..8. WKC model for health in new urban settings ..8. Glocalization .. 10. Section II: Reviewing evidence, exploring opportunities for synergy .11. Limitations of the review 11. Complex associations between determinants: subfocus on housing ..12. Major pathways for associations that may be considered.

3 12. A possible approach for prioritizing action ..13. Governance, a critical causal pathway for addressing SDH in urban settings 14. Five strategic actions that may be more closely considered ..14. Slum upgrading .15. Improving access to quality health care ..16. Targeted health promotion for specific risks to health .17. Integration of health, welfare and education services .. 17. Sustainable urban development .18. Inventory of resources 19. Section III: Positioning for action .21. Priority areas of KNUS work ..21. Linking with the Knowledge network on Measurement ..21. Pilot projects for scaling up ..22. Linking with the Knowledge network on Globalization ..22. Starting points for deriving new and better knowledge ..22. Role of the members of the KNUS.

4 23. Preliminary listing of potential country partners ..23. Proposed mechanisms for taking the work forward ..24. References ..25. Appendix ..29. Healthier people in healthier environments. 2. WHO Kobe Centre, Japan 2005. DOCUMENT AS OF 25 AUG 2005. SECTION I: A closer look at urban slums, poverty and ill- health in the 21st century Development of the area of focus of the Knowledge Network on Urban Settings, the CSDH's conceptual framework for understanding and acting on SDH. New urban settings The urban setting as we know it today is a complex and dynamic environment that has a profound impact on the health of the human community. Three interrelated characteristics of urbanization make it different from what it was in the past: 1) the rapid rate of urban growth and its effect on municipal governments; 2) the upsurge in poverty and its effect on the urban economy; and, 3) the proliferation of slums and their impact on the urban environment and the environment's impact on slums.

5 Combined, these conditions give rise to new urban settings 5characterized by a radical process of change with positive and negative effects, increased inequities, greater environmental impacts, expanding metropolitan areas and fast- growing slums. In order to meet the health challenges that new urban settings create, it is important to grasp the nature and scale of urbanization, the various driving forces6 that affect it and the factors and determinants7 of health that are linked to this process. Rapid urbanization Over the last 50 years, urban populations have grown dramatically. While in 1950 approximately of the world's population was living in urban areas, by 1975 this figure had reached around In 2006/07 this figure is expected to nudge 50%, with of the people living in cities by 2030 (UN, 2003: 5).

6 Africa had the highest annual rate of urban growth over the period 1975-2000 at , compared to Asia at , Latin America and the Caribbean at , Europe at and North America at The projected rate of urban population growth (2000- 2030) in the less developed regions is per annum, in contrast to that of developed countries at (UN, 2004: 3). The causes of urban growth in each of these regions vary. As more people continue to be displaced from rural areas, and as the number of people born in cities increases, the urban population will only continue to grow. The current average annual population increase in developing world cities is estimated to be 60 million, a rate of 163 000 people per day. Over half of this increase is caused by natural population growth within these cities.

7 The most spectacular outcome will be the burgeoning of megacities with populations in excess of 10 million inhabitants (25 in 2020). But if megacities are the prominent feature of the urbanization process, second tier cities will host three quarters of population growth (UN-HABITAT, 2005:5). Overall, the largest share of the increase in the 6. Driving forces are defined within the framework of the WHO DPSEEA model for environmental health that delineates the interaction between driving forces, pressures, state, exposures, effects and actions when analyzing the effects of the environment on human health. (WHO, Health, Environment and Sustainable Development: Five years after the Earth Summit, 1997.). 7. Determinants are defined as the range of personal, social, economic and environmental factors which determine the health status of individuals and populations'.

8 (WHO, Health Promotion Glossary, 1998.). Healthier people in healthier environments. 3. WHO Kobe Centre, Japan 2005. DOCUMENT AS OF 25 AUG 2005. world urban population will be attributed to urban settlements with fewer than 500 000. inhabitants and cities with populations of 1-5 Despite the different causes of urban growth, cross-national continuities are noted. An example would be the dynamic between push-pull factors where pull factors of the urban environment and push factors at the local and national level ( government policy on land tenure and use); and at a global level ( the globalization of agricultural production, new agrarian structure, retrenchment of agricultural jobs) are driving urban growth. The urbanization of poverty Slums are characterized by: The acceleration in the rate of Lack of basic services urbanization has been accompanied by Substandard housing or illegal and an equally alarming increase in urban inadequate building structures poverty.

9 At this time there are Overcrowding and high density Unhealthy living conditions and hazardous approximately three Billion people locations living in urban areas, and approximately Insecure tenure, irregular or informal a Billion now living in slums. Slums are settlements the most visible manifestation of Poverty and social exclusion poverty. Minimum settlement size Urban poverty is severe, pervasive and largely unacknowledged. According to the latest Global Report on Human Settlements, 43% of the urban population in developing regions lives in slums. In the least developed countries, 78% of urban residents are slum- dwellers. Many countries do not welcome urbanization and urban poverty remains largely In most instances, national and municipal governments are not prepared from multiple perspectives to manage urban development in support of the poor.

10 There is no universal agreement on the definition of what a slum' is, but for purposes of this paper, the general definition used by UN-HABITAT in a recent report denotes a wide range of low-income settlements and/or poor human living conditions.'11 Slums are further characterized by the following attributes13: a) lack of basic services; b) substandard housing or illegal and inadequate building structures; c) overcrowding and high density; d) unhealthy living conditions and hazardous locations; e) insecure tenure, irregular or informal settlements14; f) poverty and social exclusion; and, g) minimum settlement size. These attributes are associated or linked with ill-health, the details of which are discussed later in this paper. As the urban slum population is expected to grow to approximately two Billion by 2030 (from 32% to 41% of the world's urban population), and to around three Billion by 2050, the scale and speed of this phenomenon poses serious and compelling risks and challenges to health.

Chapter 1 Effects of Population Growth and … 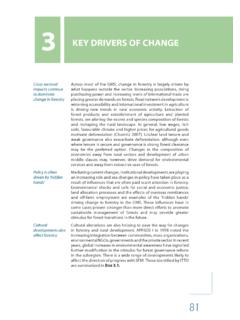 KEY DRIVERS OF CHANGE 85 Outmigration and overseas work can beneﬁ t forests In addition to population growth and domestic migration and urbanization, outmigration is increasingly recognized as a driver 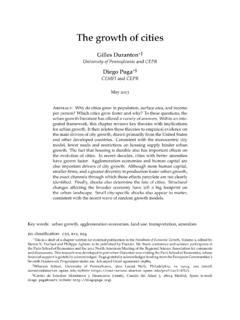 The growth of cities - OECD.org

The growth of cities Gilles Duranton‡ University of Pennsylvania and CEPR Diego Puga§ CEMFI and CEPR May 2013 Abstract: Why do cities grow in population, surface area, and income 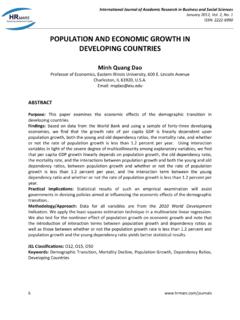 POPULATION AND ECONOMIC GROWTH IN … 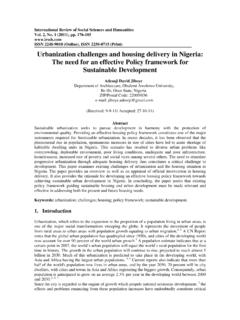