A Classical View of the Business Cycle - irelandp.com

A Classical view of the Business Cycle Michael T. Belongia Peter N. Ireland Otho Smith Professor of Economics Department of Economics University of Mississippi Boston College Box 1848 140 Commonwealth Avenue University, MS 38677 Chestnut Hill, MA 02467. July 2017. Abstract: In the 1920s, Irving Fisher extended his previous work on the Quantity Theory to describe how, through an early version of the Phillips Curve, changes in the price level could affect both output and unemployment. At the same time, Holbrook Working designed a quantitative rule for achieving price stability through control of the money supply. This paper develops a structural vector autoregressive time series model that allows these Classical .

1 A Classical view of the Business Cycle Michael T. Belongia Peter N. Ireland Otho Smith Professor of Economics Department of Economics University of Mississippi Boston College Box 1848 140 Commonwealth Avenue University, MS 38677 Chestnut Hill, MA 02467. July 2017. Abstract: In the 1920s, Irving Fisher extended his previous work on the Quantity Theory to describe how, through an early version of the Phillips Curve, changes in the price level could affect both output and unemployment. At the same time, Holbrook Working designed a quantitative rule for achieving price stability through control of the money supply. This paper develops a structural vector autoregressive time series model that allows these Classical .

2 Channels of monetary transmission to operate alongside, or perhaps even instead of, the now- more-familiar interest rate channels of the canonical New Keynesian model. Even with Bayesian priors that intentionally favor the New Keynesian view , the United States data produce posterior distributions for the model's key parameters that are more consistent with the ideas of Fisher and Working. Changes in real money balances enter importantly into the model's aggregate demand relationship, while growth in Divisia M2 appears in the estimated monetary policy rule. Contractionary monetary policy shocks reveal themselves through persistent declines in nominal money growth instead of rising nominal interest rates.

3 These results point to the need for new theoretical models that capture a wider range of channels through which monetary policy affects the economy and suggest that, even today, the monetary aggregates could play a useful role in the Federal Reserve's policymaking strategy. JEL Codes: B12, E31, E32, E41, E43, E52. Keywords: Bayesian vector autoregression, Divisia monetary aggregate, Monetary transmission mechanism, New Keynesian model, Quantity Theory of money. Acknowledgments: We are especially grateful to David Laidler for his encouragement during the development of this paper and to John Taylor for helpful comments on a previous draft; all errors that remain are our own.

4 Neither of us received any external support for, or has any financial interest that relates to, the research described in this paper. Introduction The New Keynesian model used for much of modern Business Cycle analysis consists, at its core, of three equations: forward-looking Phillips and IS Curves, together with an interest rate rule for monetary policy. A central element of this model is some form of administrative cost or information rigidity that prevents firms from adjusting their output prices fully and immediately in response to shocks that hit the economy. As well, households exhibit a willingness to rearrange their spending patterns in response to changes in the real interest rate as an intertemporal price.

5 In this model, the effects of monetary policy actions on output and prices are transmitted exclusively through the central bank's manipulation of the short-term nominal interest rate. Temporary rigidity in goods prices also allows these nominal interest rate movements to affect real interest rates. These changes in turn then generate adjustments in household spending that affect the output gap and feed back into firms' pricing decisions via the Phillips Curve. Notably missing from the model is any separate role for variations in the quantity of Approximately ninety years ago, Irving Fisher (1923, 1925, 1926) and Holbrook Working (1923, 1926) developed an alternative view of the monetary transmission mechanism that is associated here with a Classical school of thought.

6 Quite unlike modern real Business Cycle models, this older Classical view does not deny the importance of nominal price rigidities and the resulting monetary non-neutralities in shaping Business Cycle dynamics. For example, as explained in more detail below, Fisher (1926) discovered a statistical relationship between inflation and employment that resembles closely what would later become known as the Phillips And Fisher's (1923, 1925) description of the so-called Business Cycle as a 1 More precisely, changes in the real and nominal quantities of money play no independent role in determining the dynamics of inflation, the output gap, and the short-term nominal interest rate in the standard New Keynesian model.

7 However, one can still view the central bank's choice for the average rate of nominal money supply growth as important for the determination of the model's steady-state rate of inflation. See Ireland (2004) and Nelson (2008) for more detailed discussions of this distinction and Teles, Uhlig, and Valle e Azevedo (2016) for recent evidence of long-run empirical links between money growth and inflation across countries. 2In fact, Fisher (1926) was republished as Fisher (1973) under the alternative title I. Discovered the Phillips Curve.. 1. product of the dance of the dollar singles out nominal impulses as the primary driver of aggregate fluctuations. Missing from Fisher's analyses was a full explanation of how this nominal instability could be traced back to the effects of monetary policy itself.

8 Based on Fisher's earlier research, however, Laidler (2013) argues that Fisher must have seen variations in the quantity of money as the more fundamental source of what today would be labeled as a monetary policy shock.. Along those lines, Fisher (1925) refers to Holbrook Working's then-forthcoming 1926 paper, which found that movements in bank deposits tended to lead movements in the aggregate price level. In related research, Working (1923) uses a Quantity Theory framework complementary to Fisher's to characterize a path for the money stock that would be consistent with long-run price stability and, by extension, enhanced real stability as well. After reviewing in greater detail the original work behind this Classical view of the monetary Business Cycle , this paper proceeds to sharpen both its points of similarity to and its departures from the more contemporary, New Keynesian perspective.

9 The paper then conducts an empirical exercise aimed at discovering whether the Classical channels of monetary transmission, working through Quantity-Theoretic interactions between the supply of and demand for money, might operate alongside, or perhaps even instead of, the now much more familiar New Keynesian interest rate Adapting methods outlined by Baumeister and Hamilton (2015, 2017), the econometric study begins by estimating a structural vector autoregression (VAR) for inflation, the output gap, and the federal funds rate under Bayesian priors that reflect the mainstream, New Keynesian view of the Cycle . Next, the VAR is expanded to include a Divisia monetary aggregate and the associated Divisia user cost index, using both of these new variables to help distinguish fluctuations in money supply from those in money demand.

10 Although the Bayesian priors chosen for this expanded model continue to deliberately reflect the New Keynesian view that any additional, Classical channels of monetary transmission are of limited importance, 3 Laidler (1973) develops a model similar in spirit to investigate the same question and finds significant associations between money and aggregate activity. This early paper, however, does not embed a monetary policy rule. 2. quarterly data for the United States turn out to speak strongly in favor of their existence. Posterior distributions tilt heavily towards specifications that allow terms involving real and nominal money growth to enter into the IS and monetary policy equations that, according to the strict New Keynesian view , ought to involve real and nominal interest rates alone.

Ch 23 Measuring a Nation’s Income Introduction Microeconomics studies how households and firms make decisions and how they interact in markets. ... 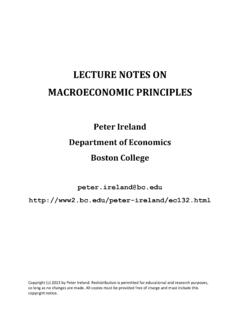 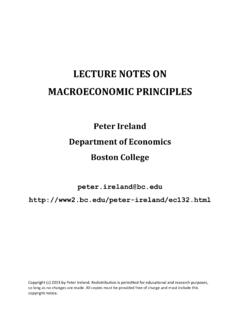 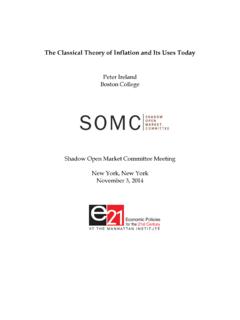 The Classical Theory of Inflation and Its Uses Today

THE CLASSICAL THEORY OF INFLATION AND ITS USES TODAY Peter Ireland1 Boston College and Shadow Open Market Committee October 2014 The Classical Theory: Why We Believe In It

Theory, Classical, Inflation, The classical theory of inflation and

37 4 Revenue trends and tax policy In brief • Economic growth is expected to remain in line with the October 2016 forecast. Tax revenue … 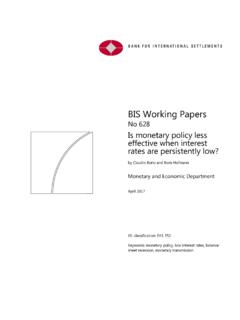 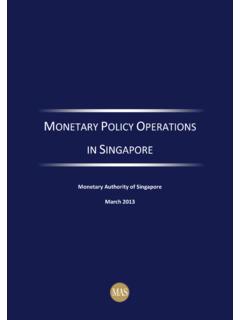 2 6. SHOCKS AND POLICY RESPONSES IN THE OPEN ECONOMY operates and the advantages and disadvantages of membership. Chapter (Interdependent Economies) 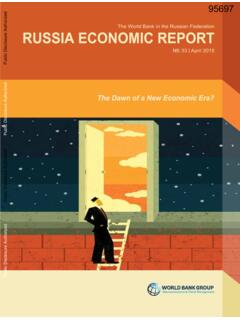 The Dawn of a New Economic Era? - World Bank … 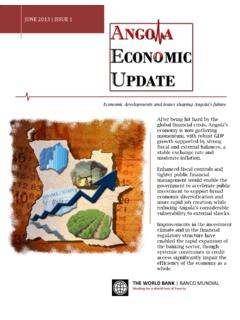 Investment Strategies Investment Product Specialists Division Personal Banking and Wealth Management Department 3Q 2018 The information contained in this document is for reference only and does not constitute any offer, solicitation, recommendation, advice or guarantee, for any investment 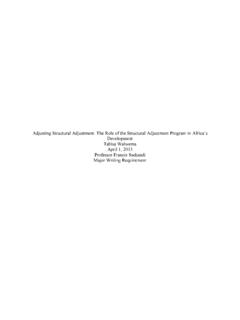 Adjusting Structural Adjustment: The Role of the ... 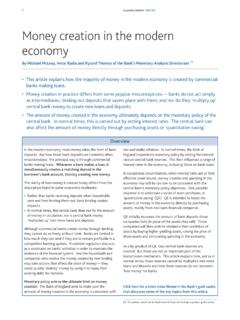 Money creation in the modern economy - …

1 Quarterly Bulletin 2014 Q1 † This article explains how the majority of money in the modern economy is created by commercial banks making loans.