4 NARRATIVE The Beginning Prompted by the September 11, 2001 (9/11) terrorist attacks on American soil, U.S. Northern Command’s mission is to deter, prevent and defeat threats and aggression aimed at the

2 To this end personnel from the Army, Navy, Air Force, Marine Corps and Coast Guard are assigned to coordinate the protection of North America from external threats, drawing on the full capabilities of all military services, including the National Guard and Coast Guard, as necessary. Additionally, the command is charged with providing defense support for civil authorities when approved by the President or Secretary of Defense. Northern command ( USNORTHCOM ) also provides military resources and support to federal, state and local authorities. The horrific attacks of September 11, 2001 led to the creation of Northern command 4.

3 The activation of USNORTHCOM on October 1, 2002, marked the first time a single military commander has been charged with protecting the homeland since the days of George Washington. Its area of responsibility (AOR) includes all air, land and sea approaches to North America, encompassing the continental , Alaska, Canada, Mexico and the surrounding water areas out to approximately 500 nautical miles. Through its first year USNORTHCOM faced the usual hurdles of building a command . acquiring needed manpower, defining the correct organization and relationships, writing the necessary plans related to its mission, and conducting training and exercises.

4 USNORTHCOM , however, also was challenged with real world issues as it built its way to full operational capability. These challenges included, developing communication with other Department of Defense organizations and external federal agencies, responding to a space shuttle accident, providing assistance to natural disasters, and providing support to an expanding list of special national security events and presidential mission support. By the end of its first year, USNORTHCOM demonstrated it could not only meet its developing capability goals, but also its operational challenges. Therefore the first commander, Air Force General Ralph E.

5 Ed . Eberhart, was able to declare the command had reached full operational capability on the second anniversary of the terrorist attack on September 11, 2003. He stated, This is not an end state. This is, in fact, part of a journey. We'll never truly reach full operational capability. We are always going to be striving to be better.. Defense Support for Civil Authorities Through 2010 the command has not had to respond to a large scale threat calling for military intervention and its efforts in this area remain focused on preparation and prevention. The command was, however, frequently called upon to respond to requests from civil authorities to provide assistance during and in the wake of national disasters.

6 The Department of Defense (DOD) already had a doctrine for handling disasters before the creation of USNORTHCOM . The command refined that doctrine to serve as a mechanism for interaction between DOD and civil authorities with each disaster it faced. Usually National Guard forces operating under their state's government were the primary provider of military assistance. However if those forces were overwhelmed or a particular need best met by the military was required, USNORTHCOM . employed forces, equipment, and/or expertise upon request. This was a key distinction. The command had no intention of superseding civil authorities.

7 Rather, the philosophy behind USNORTHCOM 's participation in defense support for civil authorities was to be prepared at all times but only to act when requested and to depart just as soon as their support was no longer required. The majority of disasters in which the command provided assistance were natural, such as hurricanes, floods, and wildfires. There were exceptions, most notably the Space Shuttle Columbia re-entry disaster which scattered debris across parts of Texas and Louisiana in February 2003; the collapse of an Interstate 35 bridge in Minneapolis occurring in August 2007;. and a massive oil spill created by the failure of the Deepwater Horizon Oil Platform in the Gulf of Mexico from the spring through the summer of 2010.

8 It did not take long until the defense support capabilities of the new command were tested. In fact, the first event came on October 2, 2002, just one day after USNORTHCOM . 5. stood up, when Hurricane Lilli struck the gulf coast with 100 mile an hour winds causing extensive damage. In 2003 USNORTHCOM contributed to the Space Shuttle Colombia disaster response in February, provided airborne fire fighting capability during the intense wildfire season in the western United States occurring through the summer and fall, and provided disaster relief in the aftermath of Hurricane Isabel, which struck the eastern seaboard in September.

9 A Modular Airborne Fire Fighting System (MAFFS) equipped C-130. drops retardant on a wildland fire The summer of 2004 saw another significant wildfire season and again USNORTHCOM . provided air assets to combat them. Just as the wildfire season was winding down, USNORTHCOM responded to a string of three hurricanes in rapid succession beginning with Charley in August which hammered Charlotte County, Florida and also hit the Carolinas. Charley was followed two weeks later by Hurricane Frances in early September which made landfall in Central Florida and continued up the east coast as a tropical depression, affecting the weather as far north as southeastern Canada.

10 Before the remnants of Hurricane Frances had completely dissipated, Ivan, the third hurricane in the string, struck near Gulf Shores, Alabama. In addition to the damage caused along the coastline, the storm spawned 117 tornadoes from Florida to Pennsylvania. In 2005 the command faced its most significant disaster to date: Hurricane Katrina. Hurricane Katrina started as a tropical depression on August 23, 2005. Already geared up for a predicted busy hurricane season, USNORTHCOM began tracking Katrina. As it became evident that this hurricane would strike the United States specific actions were decided upon and executed. 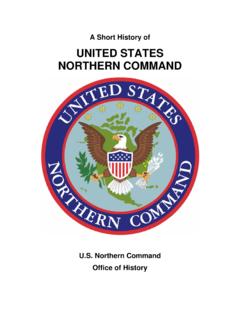 The break was short lived as wildfires returned with a vengeance to the western United States in 2007, prompting a USNORTHCOM response. Particularly hard-hit was California in the fall. In ... A Short History of USNORTHCOM ...

2013 WE HAVE THE WATCH! Current as of March 2013 NORAD and USNORTHCOM Headquarters Sight Picture 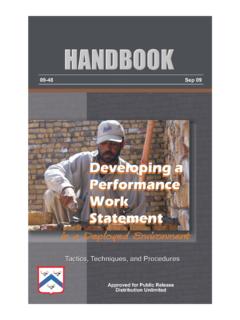 Foreword This handbook is designed to aid the requiring activity in developing a performance work statement (PWS). Army reliance on … 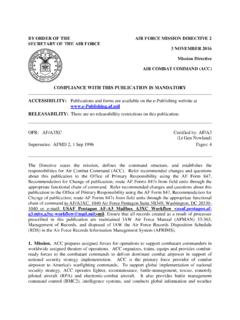 BY ORDER OF THE AIR FORCE MISSION DIRECTIVE … 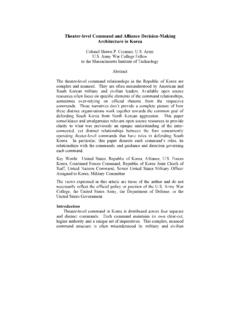 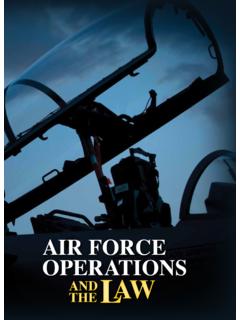 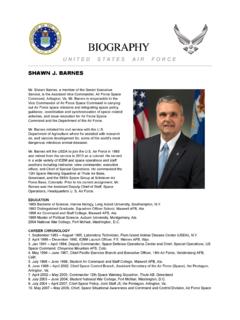