Aboriginal Experiences with Racism and its Impacts - NCCAH

SOCIAL DETERMINANTS OF HEALTH. Aboriginal Experiences WITH. Racism AND ITS Impacts . Prepared by Samantha Loppie, Credit: Fred Cattroll, Charlotte Reading & Sarah de Leeuw This paper is the second in a series of papers focused on anti- Aboriginal Racism in Canada. The first paper examined the concept of race and Racism , exploring the various forms it takes. In this paper, the focus is on the lived and structural forms of Racism . We begin by providing a brief overview of what Racism is, how it intersects with other forms of discrimination, and how it is manifested. The paper then moves to a discussion of how the dominant racialized group ( , European settlers). expresses Racism in historic and current contexts and how Aboriginal1 forms of political, sociocultural, and by individuals, families, communities, people in Canada experience Racism in economic power.

2 Racism is an experience acutely felt by many Aboriginal people in Canada. For example, according to a 2005 report of the First Nations Regional Longitudinal Health Survey (RHS), 38% of participating First Nations adults experienced at least

1 SOCIAL DETERMINANTS OF HEALTH. Aboriginal Experiences WITH. Racism AND ITS Impacts . Prepared by Samantha Loppie, Credit: Fred Cattroll, Charlotte Reading & Sarah de Leeuw This paper is the second in a series of papers focused on anti- Aboriginal Racism in Canada. The first paper examined the concept of race and Racism , exploring the various forms it takes. In this paper, the focus is on the lived and structural forms of Racism . We begin by providing a brief overview of what Racism is, how it intersects with other forms of discrimination, and how it is manifested. The paper then moves to a discussion of how the dominant racialized group ( , European settlers). expresses Racism in historic and current contexts and how Aboriginal1 forms of political, sociocultural, and by individuals, families, communities, people in Canada experience Racism in economic power.

2 Racism also intersects and nations through interactions and interpersonal, structural and sometimes with, as well as reinforces, other ways structures of the everyday world. The violent ways. We examine Racism within in which human beings discriminate truth is that the ideologies, social government policies, healthcare, and against each other, including socially prejudices and words upon which race judicial systems, and explore the unique constructed categories of gender, and Racism are built do a great deal ways that Racism is experienced by disability, ability, sexual orientation, of damage. In fact, Racism infects the Aboriginal peoples and how it Impacts class, and age (Heldke & O'Connor, lives of individuals and institutions . their well-being.)

3 2004). sometimes quietly, sometimes covertly, sometimes immediately, and sometimes Introduction Racism must be understood as over long periods of time, but always something that is lived; it is experienced unjustly. Racism is a social injustice based on falsely constructed, but deeply Definition of Terms embedded, assumptions about people and their relative social value; it is Racism is a belief or behaviour based on the notion that race' is the basis of human often used to justify disparities in the characteristics and practices, and that racial differences produce inherent superiorities or distribution of resources (MacKinnon, inferiorities in particular races (Merriam-Webster Dictionary, 2013a). 2004). Racism manifests in multiple ways that allow some groups of people Racialize refers to the practice of assigning a racial identity to a person or group of people to see themselves as superior to others (Merriam-Webster Dictionary, 2013b).

4 And to claim and maintain multiple 1 The term Aboriginal ' will be used to denote the Indigenous peoples of Canada as defined by the Constitution Act of Canada 1982, Section 35, 2 as First Nations (including status/non-status Indians, and on/off reserve Indians), Inuit and M tis peoples. sharing knowledge making a difference partager les connaissances faire une diff rence . Racism is an experience acutely felt by people, including assumptions about Many Canadians' beliefs, attitudes, many Aboriginal people in Canada. For the pervasiveness and cause of alcohol and behaviours toward Aboriginal example, according to a 2005 report and drug addiction, unemployment, and people remain heavily influenced by of the First Nations Regional Longitudinal violence (Backhouse, 1999; de Leeuw, colonial stereotypes, entrenched in a Health Survey ( RHS), 38% of participating Kobayashi, & Cameron, 2011).

5 One mentality of us versus them' (Bourassa, First Nations adults experienced at least persistent and particularly damaging McKay-McNabb, & Hampton, 2004). one instance of Racism in the past 12 depiction is that Aboriginal peoples are The positioning of Aboriginal people months; 63% of them felt that it had at willing wards of the state,' dependent as an idealized or demonized other'. least some effect on their self-esteem on others and ultimately better off when exaggerates cultural differences and (First Nations Centre, 2005). the federal government oversees their reinforces racialized generalizations (de affairs (Erickson, 2005). This not only Leeuw, Kobayashi, & Cameron, 2011). Expressions of Racism degrades the autonomy of Aboriginal Inaccurate or inadequate education peoples and their legitimate right to be about Canada's colonial history and The labeling of individuals and groups self-determining, but it has damaged the its role in creating the disadvantages as different' is part of the process self-concept of countless generations currently facing Aboriginal communities of creating social hierarchies, which of people who unfortunately, at times, essentially transfers responsibility represents the foundation of oppression internalize such demeaning stereotypes for economic and social problems to (de Leeuw, Kobayashi, & Cameron, (Harding, 2006).)

6 Aboriginal peoples' presumed failure 2011). Throughout most human societies, to evolve, rather than to the socially particular groups have consistently The media plays a considerable role in and economically damaging effects of been othered', marginalized and shaping public perceptions of Aboriginal colonialism and Racism (Harding, 2006). discriminated against (Ibid.). The peoples in Canada (Furniss, 2001). renowned theorist Foucault proposed Although contemporary representations Violent Racism that discrimination is not always are more accurate and inclusive of Violent Racism is defined as acts of expressed in violent ways ( , slavery, Aboriginal perspectives than at any time violence perpetrated against a person genocide) but can take less aggressive in history, they are still often corrupted or group based on the racialized group forms ( , colonialism) that present by misinterpretations, tokenism, and to which they are assigned (Bowling, power inequalities as neutral and natural lack of historical or cultural context 1999).

7 Historically, there are many processes (Ibid.). Yet all forms of (Harding, 2006). Media decision- instances where Aboriginal people oppression, including Racism , contribute makers select what to report and, in so suffered violence at the hands of settlers. negatively to the well-being of certain doing, can enhance or damage public One poignant example of widespread racialized groups (Clark, Anderson, opinion of Aboriginal peoples (Furniss, violence can be found in the experience Clark, & Williams, 1999). Within the 2001). News reports often focus on of Mi'kmaq people in Nova Scotia. racialized hierarchy of Canadian society, the social and economic challenges During the mid 1700s, the founder of Aboriginal peoples continue to be facing Aboriginal communities while Halifax, Edward Cornwallis, placed a othered' by settler2 groups in an attempt ignoring stories of discrimination and/ bounty of ten guineas for the scalp of to rationalize colonial actions that or exploitation by powerful groups or every Mi'kmaq man, woman or child, disadvantage, oppress, and ultimately authorities (Harding, 2006).

8 In recent thus causing the death of thousands harm them (de Leeuw, Kobayashi, years, Aboriginal leaders have attempted (O'Connor, 2011). Although Cornwallis'. & Cameron, 2011). Within Canada, to use the media to rally support for government perpetrated heinous anti- Aboriginal Racism is expressed in issues facing their communities, calling acts of racialized violence against the numerous ways: through stereotyping, on the politics of embarrassment' to Mi'kmaq people, he is immortalized in stigmatization and violence, as well expose the government's poor treatment the province's history, having streets, as through many of the structures of Aboriginal peoples and accurately military bases and schools named after of Canadian society. inform the public (Furniss, 2001).

9 Sadly, him as well as a memorial statue in a it has proven very difficult to challenge downtown Halifax park. For decades, Racialized Stereotypes and Stigma entrenched racial stereotypes and gain Mi'kmaq people in the province There are a number of negative support for the equitable treatment of beseeched the city to remove Cornwallis'. Aboriginal peoples. name from schools in particular, but stereotypes associated with Aboriginal A settler is defined as a person who settles in an area [such as the European settlers of North America] (Oxford Dictionaries, ). 2. 2. Credit: , ID 28812119. Idle No More Widespread backlash against the Idle No More movement demonstrates the unfortunate but undeniable anti- Aboriginal Racism that persists within Canada (Perkel, 2013, Van Bemmel, 2013).

10 The Idle No More (INM) movement began when four Aboriginal women in Saskatoon, Saskatchewan responded to the Canadian Parliament adopting the Omnibus Bill C-45, which included a number of unfair amendments to Aboriginal land rights (Gordon, 2013). The bill would offer deregulation for industrial development and allow companies to buy and sell reserve land without consideration or compensation to the communities on those lands (Paradis, 2013). This bill disregarded Aboriginal land rights and ignored the environmental and health Impacts industrial development would cause (Paradis, 2013). Communities were ignited by the government's lack of concern for Aboriginal treaties and the INM movement gained momentum through social media networks. The overarching goal of the movement was to advance Indigenous sovereignty, create allies and forge new political relationships, as well as put pressure on the government to protect the environment and Aboriginal rights (Gordon, 2013). 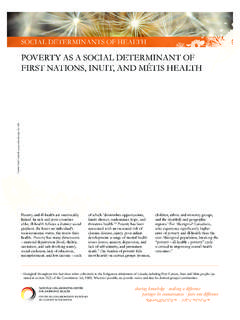 Poverty as a social determinant for First Nations, Inuit ...

POVERTY AS A SOCIAL DETERMINANT OF FIRST NATIONS, INUIT, AND MÉTIS HEALTH children, ethnic and minority groups, and the disabled) and geographic regions.4 For Aboriginali Canadians, ... Exploring the underlying social determinants of Aboriginal health, I. Anderson, F. Baum, & 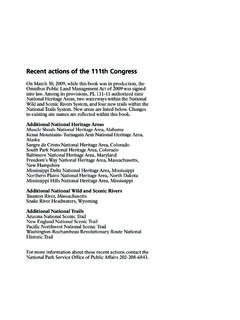 On March 30, 2009, while this book was in production, the Omnibus Public Land Management Act of 2009 was signed into law. Among its provisions, PL 111-11 authorized nine