On March 30, 2009, while this book was in production, the Omnibus Public Land Management Act of 2009 was signed into law. Among its provisions, PL 111-11 authorized nine

3 National Park System On August 25, 1916, President Woodrow Wilson signed the act creating the National Park Service, a new federal bureau in the De- partment of the Interior responsible for pro- tecting the 35 national parks and monuments then managed by the department and those yet to be established. This Organic Act . states that the Service thus established shall promote and regulate the use of the Federal areas known as national parks, monuments and reservations .. by such means and mea- sures as conform to the fundamental purpose of the said parks, monuments and reserva- tions, which purpose is to conserve the scen- ery and the natural and historic objects and the wild life therein and to provide for the enjoyment of the same in such manner and by such means as will leave them unimpaired for the enjoyment of future generations.. The National Park Service strives to meet those original goals, while filling other roles as well: guardian of our diverse cultural and recreational resources; environmental advo- cate; world leader in the parks and preserva- tion community; and pioneer in the drive to protect America's open space.

4 The National Park System comprises 391. areas covering over 84 million acres in 49. States, the District of Columbia, American Samoa, Guam, Puerto Rico, Saipan, and the Virgin Islands. These areas are of such na- tional significance as to justify special rec- ognition and protection in accordance with various acts of Congress . By the Act of March 1, 1872, Congress established Yellowstone National Park in the Lincoln Memorial Territories of Montana and Wyoming as a public park or pleasuring-ground for the benefit and enjoyment of the people and placed it under exclusive control of the Sec- retary of the Interior. The founding of Yel- lowstone National Park began a worldwide national park movement. Today over 100. nations contain some 100,000 national parks or equivalent preserves. In the years following the establishment of Yellowstone, the United States authorized additional national parks and monuments, most of them carved from the federal lands of the West.

5 These, also, were administered by the Department of the Interior, while other monuments and natural and historical areas were administered as separate units by the War Department and the Forest Service of the Department of Agriculture. No single 6. agency provided unified management of the tures of land or water of great scenic and sci- varied federal parklands. entific quality and are usually designated as An Executive Order in 1933 transferred 56 national parks, monuments, preserves, sea . national monuments and military sites from shores, lakeshores, or riverways. Such areas the Forest Service and the War Department contain one or more distinctive attributes to the National Park Service. This action was like forest, grassland, tundra, desert, estuary, a major step in the development of today's or river systems; they may contain windows truly national system of parks a system that on the past for a view of geological history.

6 Includes areas of historical, scenic, and scien- they may contain imposing landforms like tific importance. mountains, mesas, thermal areas, and cav- Congress declared in the General Authori- erns; and they may be habitats of abundant ties Act of 1970 that the National Park or rare wildlife and plantlife. System, which began with the establishment Generally, a national park contains a of Yellowstone National Park in 1872, has variety of resources and encompasses large since grown to include superlative natural, land or water areas to help provide adequate historic, and recreation areas in every re- protection of the resources. gion .. and that it is the purpose of this Act A national monument is intended to to include all such areas in the System.. preserve at least one nationally significant Additions to the National Park System resource. It is usually smaller than a national are now generally made through acts of park and lacks its diversity of attractions.

7 Congress , and national parks can be created In 1974, Big Cypress and Big Thicket were only through such acts. But the president authorized as the first national preserves. has authority, under the Antiquities Act of This category is established primarily for the 1906, to proclaim national monuments on protection of certain resources. Activities lands already under federal jurisdiction. The like hunting and fishing or the extraction of Secretary of the Interior is usually asked by minerals and fuels may be permitted if they Congress for recommendations on proposed do not jeopardize the natural values. Na- additions to the System. The Secretary is tional reserves are similar to the preserves. counseled by the National Park System Ad- Management may be transferred to local or visory Board, composed of private citizens, state authorities. The first reserve, City of which advises on possible additions to the Rocks, was established in 1988.

8 System and policies for its management. Preserving shoreline areas and off-shore islands, the national lakeshores and na- Nomenclature of Park System Areas tional seashores focus on the preservation The diversity of the parks is reflected in the of natural values while at the same time pro- variety of titles given to them. These include viding water-oriented recreation. Although such designations as national park, national national lakeshores can be established on preserve, national monument, national me- any natural freshwater lake, the existing four morial, national historic site, national sea- are all lo cated on the Great Lakes. The na- shore, and national battlefield park. tional sea shores are on the Atlantic, Gulf, Although some titles are self-explanatory, and Pacific coasts. others have been used in many different National rivers and wild and scenic riv- ways.

9 For example, the title national monu- erways preserve ribbons of land bordering ment has been given to natural reserva- free-flowing streams which have not been tions, historic military fortifications, prehis- dammed, channelized, or otherwise altered. toric ruins, fossil sites, and to the Statue of Besides preserving rivers in their natural Liberty. state, these areas provide opportunities for In Recent years, both Congress and the outdoor activities like hiking, canoeing, and National Park Service have attempted to hunting. sim plify the nomenclature and to establish National scenic trails are generally long- basic criteria for use of the different official distance footpaths winding through areas of titles. Brief definitions of the most common natural beauty. titles follow. Although best known for its great scenic Areas added to the National Park System parks, over half the areas of the National Park for their natural values are expanses or fea- System preserve places and commemorate 7.

10 Persons, events, and activities important in areas in urban centers. There are also nation- the nation's history. These range from ar- al recreation areas outside the National Park cheological sites associated with prehistoric System that are administered by the Forest Indian civilizations to sites related to the lives Service, Department of Agriculture. of modern Americans. Historical areas are National parkways encompass ribbons customarily preserved or restored to reflect of land flanking roadways and offer an op- their appearance during the period of their portunity for driving through areas of scenic greatest historical significance. interest. They are not designed for high speed In Recent years, national historic site has travel. Besides the four areas set aside as park . been the title most commonly applied by ways, other units of the National Park System Congress in authorizing the addition of such include parkways within their boundaries. 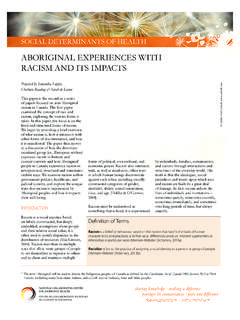 Aboriginal Experiences with Racism and its Impacts - NCCAH

2 Racism is an experience acutely felt by many Aboriginal people in Canada. For example, according to a 2005 report of the First Nations Regional Longitudinal Health Survey (RHS), 38% of participating First Nations adults experienced at least