Chemical-Specific Health Consultation for Joint EPA/ATSDR National Mercury Cleanup Policy Workgroup Action Levels For Elemental Mercury Spills March 22, 2012 Prepared by Division of Toxicology and Environmental Medicine Prevention, Response and Medical Support Branch Emergency Response Team ATSDR Chemical Specific Health Consultation Mercury Executive Summary In 2000, the Agency for Toxic Substances and Disease Registry (ATSDR) provided tables of Action level guidelines for indoor air concentrations of Elemental or metallic Mercury in response to a request from both the Environmental Protection Agency (EPA) and the state of Michigan. The Action Levels had been previously developed for individual sites and situations, but the tables summarized these guidelines in a succinct package for use by field personnel. The request was prompted by several small Spills in homes caused by replacing or relocating natural gas regulators containing Mercury . The homes affected included those serviced by utility companies in both Chicago and Detroit.

1 Chemical-Specific Health Consultation for Joint EPA/ATSDR National Mercury Cleanup Policy Workgroup Action Levels For Elemental Mercury Spills March 22, 2012 Prepared by Division of Toxicology and Environmental Medicine Prevention, Response and Medical Support Branch Emergency Response Team ATSDR Chemical Specific Health Consultation Mercury Executive Summary In 2000, the Agency for Toxic Substances and Disease Registry (ATSDR) provided tables of Action level guidelines for indoor air concentrations of Elemental or metallic Mercury in response to a request from both the Environmental Protection Agency (EPA) and the state of Michigan. The Action Levels had been previously developed for individual sites and situations, but the tables summarized these guidelines in a succinct package for use by field personnel. The request was prompted by several small Spills in homes caused by replacing or relocating natural gas regulators containing Mercury . The homes affected included those serviced by utility companies in both Chicago and Detroit.

2 The guidelines were designed to help risk managers at spill scenes in homes or other locations make decisions regarding cleanup, relocation, etc. Throughout the years, these Action level guidelines have been widely disseminated by users. A workgroup has been formed jointly by EPA and ATSDR to develop consistent cleanup guidance for Mercury Spills , including not only public health actions but also cleanup and sampling methods. As part of that joint effort, EPA has requested that ATSDR update the 2000 guidelines to be included in a more comprehensive guidance. This health consultation is intended to provide that update. The health consultation provides detailed justifications for Action Levels based on the ATSDR Chronic Minimal Risk Level and EPA Reference Concentration. The recommended Action Levels for Mercury in residential settings remain 1 ug/m3 for normal occupancy and 10 ug/m3 for isolation ( , evacuation, limited access, etc.) of the residents from exposure to the Mercury .

3 Action Levels for settings other than residential are based on residential Levels and adjusted for the condition based on the presumed exposure. Sections that describe when Action Levels should be adjusted to meet site specific conditions are included. The most useful features of the 2000 tables have been retained; new sections have been added that address issues related to the tables that have recurred during the past 11 years. Additional information to help on-scene risk managers communicate risk is provided. Technological advances in detecting environmental Mercury are also considered. 1. ATSDR Chemical Specific Health Consultation Mercury Table of Contents Executive Summary Introduction Background Health Implications Health Guidance Values Discussion Visible Mercury Residential Settings Normal Occupancy Isolation/Relocation Personal Belongings Conditions when other concentrations apply Commercial and Occupational Settings Workplaces covered by OSHA's Hazard communications standard Workplaces not covered by OSHA's Hazard communications standard Conditions when other concentrations apply Schools and Educational Settings Vehicles Conclusions Recommendations Appendices References 2.

4 ATSDR Chemical Specific Health Consultation Mercury Introduction Background: Elemental , also called metallic, Mercury is common in our environment due in part to its unique properties and multiple uses in our daily lives [Baughman 2006;. Gochfeld 2003; Risher 2007; Song 2009]. Mercury in its Elemental state can pose a hazard to humans. The hazard for any person is based on how sensitive that person is to the effects of Mercury , how long that person is exposed to Mercury , and how much Mercury is present, among other factors. These factors as they pertain to Mercury Spills are discussed below. Mercury is persistent in the environment, and is considered a hazard primarily under chronic exposure scenarios under most conditions. Mercury cleanups are difficult and pose substantial challenges [MacLehose 2001] to risk managers, such as the Environmental Protection Agency's (EPA) On-scene Coordinators (OSC). Throughout the years, various EPA Regions have established guidance for conducting these cleanups.

5 EPA's Office of Emergency Management convened a National Workgroup to harmonize this guidance and invited the Agency for Toxic Substances and Disease Registry (ATSDR) to join the Workgroup [EPA 2011]. Many of the guidance documents developed by the various regional offices included Suggested Action Levels for Indoor Mercury Vapors in Homes or Businesses with Indoor Gas Regulators . This guidance was developed by ATSDR for public health and environmental professionals in 2000 [ATSDR 2000]. The National Workgroup requested that ATSDR revise these Action Levels to reflect advances in technology and knowledge gained through experiences since ATSDR provided them. EPA. and ATSDR staff formed a Subgroup of the National Workgroup. The Subgroup determined that an ATSDR chemical-specific health consultation would be the most effective way to accomplish this task. The health consultation will be included in the National Policy upon finalization of that policy.

6 The Subgroup requested that the list of Action Levels be expanded to include other exposure settings such as schools and vehicles such as school buses. Mercury is a conductive metal and a liquid at room temperature, physical properties that make the substance a unique asset in many industrial and consumer applications [HSDB. 2005]. Mercury is also used in some of the rituals and practices of certain religious sects [Alison Newby 2006; Garetano 2006, 2008; Rogers 2007, 2008]. When spilled, Mercury 's viscosity is similar to that of water it flows and collects in the same way and locations that water would if spilled. However, Mercury is unusually dense compared with water; a milliliter (mL)of Mercury weighs more than 13 grams (g) while a milliliter of water weighs only 1 gram. Mercury has a low vapor pressure at standard temperature and pressure, so the liquid vaporizes slowly at room temperatures [HSDB 2005; NIOSH 2007]. Elemental Mercury may combine with oxygen to form a mercuric oxide skin on its outer surface.

7 Mercuric oxide does not vaporize, but the shell formed in this manner is fragile. The slightest movement can break this oxide shell and free the Elemental Mercury contained inside [EPA 2005]. Mercury amalgamates with other metals and is attracted to sulfur-based compounds [Yamamoto 2007]. Mercury is unusual in the number and properties of other compounds it forms. This health consultation evaluated metallic Mercury ( Elemental Mercury or quicksilver) only. Other forms of Mercury have different properties and different hazards that are not addressed here except as they relate to metallic Mercury . In American homes with no known Mercury spill , concentrations in the ug/m3 range have been reported, with typical ambient (outside air) concentrations approximately a factor of 10 less than that [Carpi 2001; Garetano 2008; Johnson 2003]. 3. ATSDR Chemical Specific Health Consultation Mercury Health Implications: The primary route of exposure to metallic Mercury is inhalation of its colorless and odorless vapors [ATSDR 1999; Bose-O'Reilly 2008; Lee 2009].

8 Ingested Elemental Mercury can be absorbed poorly through the intestinal walls. Dermal exposure or absorption of metallic Mercury through the skin is considered a minor exposure route [ATSDR 1999; Ellis 2009]. Some case studies report dermal irritation after prolonged contact with Mercury [De Capitani 2009], however, this dermal irritation does not seem to cause greater absorption. The organ or organ system in humans most sensitive to all forms of Mercury changes somewhat over our life spans. For a developing fetus or young child, the most sensitive endpoint is considered to be the developing central nervous system (CNS) [Abbaslou 2006;. Baughman 2006; Bensefa-Colas 2010; Bose-O'Reilly 2008, 2010; Grant 2010]. While data about humans are limited, several animal studies report CNS effects in offspring after maternal exposure to Mercury (see Section of the ATSDR Toxicological Profile). [ATSDR 1999; Morgan 2002]. As humans mature, our CNS system completes its development and we become less sensitive to the effects of Mercury on our CNS.

9 That is, a greater exposure ( , either higher concentration, more frequent exposure events, or longer duration of exposure events) is required to produce effects on the CNS. For this reason, our most sensitive populations are young children and developing fetuses; women who are confirmed or suspected to be pregnant also require consideration as a sensitive population to protect the fetus. The age at which young children become less sensitive to the CNS effects of Mercury is unclear but the concern is usually for pre-school children. Individuals that have matured beyond this window of greater vulnerability for the CNS may experience effects on the kidneys before the effects on the CNS become evident. Consequently, the next human organ most sensitive to the effects of Mercury tends to be the kidney; inorganic forms of Mercury are excreted almost exclusively through the kidneys [Baughman 2006; Bensefa-Colas 2010; Franko 2005; Opitz 1996; Samir 2011].

10 Generally speaking, the concentration of Mercury that may pose a CNS threat to the young is less than the concentration that could affect the kidneys in older children or adults under the same conditions of exposure. In animals, acute Mercury exposures (as long as 14 days in duration). of approximately mg/m3 may cause significant CNS effects; exposures in the mg/m3 range more commonly cause significant CNS effects. Typically, acute exposures of ~3 mg/m3 affect the kidneys (see Figure 1A) [ATSDR 1999]). Health Guidance Values: Both ATSDR and EPA have developed health guidance values (HGVs) for inhaled Mercury vapors, based on a 1983 study of workplace exposures [Fawer 1983]. The workers in the study were exposed in their workplace to Mercury vapors. The workers in the Fawer cohort came from three different types of workplaces: fluorescent tube manufacture; chloralkali plants; and acetaldehyde production. The authors reported a Lowest Observed Adverse Effect Level (LOAEL) of 26 ug/m3 of exposure averaged over a period of 15 years [Fawer 1983]. 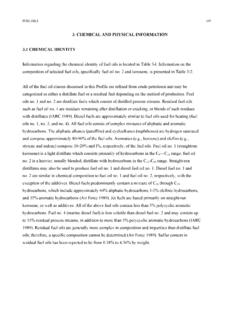 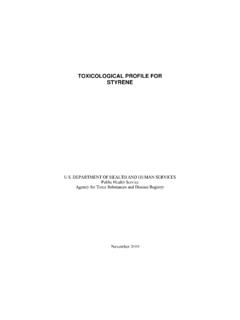 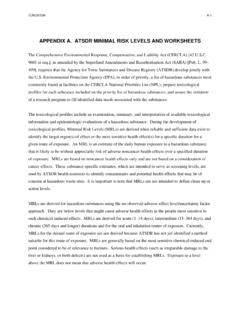 Draft Toxicological Profile for Antimony and … 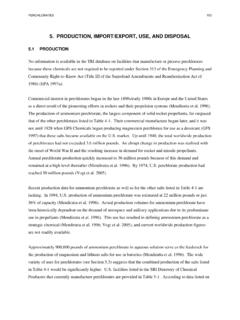 5. PRODUCTION, IMPORT/EXPORT, USE, AND …

PERCHLORATES 155 5. PRODUCTION, IMPORT/EXPORT, USE, AND DISPOSAL EPA’s website, there were 63 Federal agency facilities and 168 non-Federal facilities in the United States 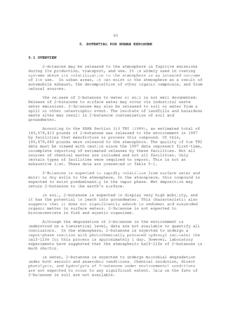 65 5. POTENTIAL FOR HUMAN EXPOSURE 5.1 OVERVIEW 2-Butanone may be released to the atmosphere in fugitive emissions during its production, transport, and use. 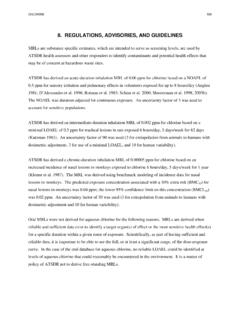 CHLORINE 185 8. REGULATIONS, ADVISORIES, AND GUIDELINES. MRLs are substance specific estimates, which are intended to serve as screening levels, are used by 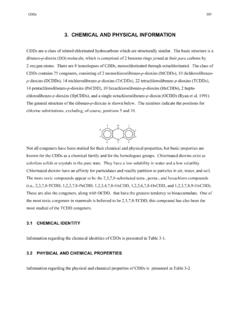 3. CHEMICAL AND PHYSICAL INFORMATION. CDDs are a class of related chlorinated hydrocarbons which are structurally similar. The basic structure is a ... Not all congeners have been studied for their chemical and physical properties, but basic properties are known for the CDDs as a chemical family and for the homologous groups. Chlorinated ... 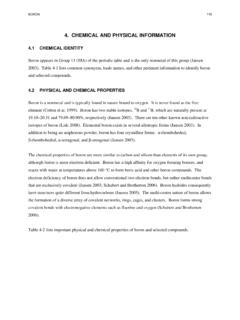 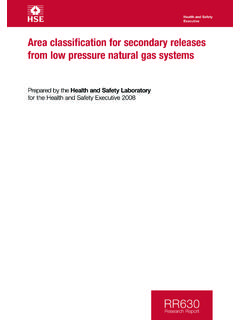 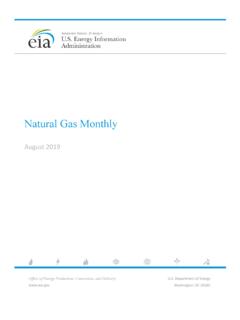 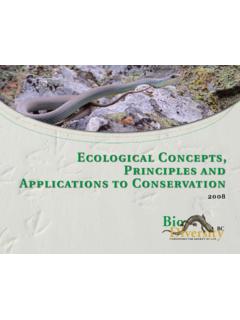 Ecological Concepts, Principles and Applications to ...

A o t t is doc ent The purpose of this document is to provide a primer on the concepts and principles that support cooperative ac-tions to conserve B.C.’s rich biodiversity. 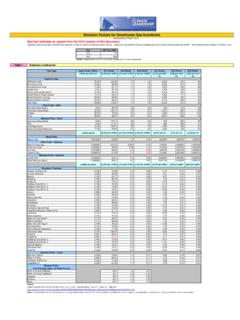 Last Modified: 9 March 2018 Red text indicates an update from the 2015 version of this document.