2003-2008 CC Pace Systems, All Rights Reserved1 Agile Project Committed Partner. Creating 2003-2011 CC Pace Systems, All Rights Reserved2 Table of ContentsI. The Problem: Project Manager as Uninspired The Solution: Project Manager as Visionary The Means: An Agile Project Management 2003-2011 CC Pace Systems, All Rights Reserved3I. IntroductionToday s Information Technology (IT) manager is under ever-increasing pressure to deliver results in the formof applications that drive improvements to the bottom line even while IT budgets are being significantlyslashed. Meanwhile, despite the fall of the Internet economy business environments continue to change at arapid pace leaving many IT shops struggling to keep up with the pace of change. These changes have led toan increased interest in Agile software development methodologies with their promise of rapid delivery andflexibility while maintaining methodologies such as eXtreme Programming (XP), SCRUM and Feature-Driven Development strive toreduce the cost of change throughout the software development process.

1 2003-2008 CC Pace Systems, All Rights Reserved1 Agile Project Committed Partner. Creating 2003-2011 CC Pace Systems, All Rights Reserved2 Table of ContentsI. The Problem: Project Manager as Uninspired The Solution: Project Manager as Visionary The Means: An Agile Project Management 2003-2011 CC Pace Systems, All Rights Reserved3I. IntroductionToday s Information Technology (IT) manager is under ever-increasing pressure to deliver results in the formof applications that drive improvements to the bottom line even while IT budgets are being significantlyslashed. Meanwhile, despite the fall of the Internet economy business environments continue to change at arapid pace leaving many IT shops struggling to keep up with the pace of change. These changes have led toan increased interest in Agile software development methodologies with their promise of rapid delivery andflexibility while maintaining methodologies such as eXtreme Programming (XP), SCRUM and Feature-Driven Development strive toreduce the cost of change throughout the software development process.

2 For example, XP uses rapid iterativeplanning and development cycles in order to force trade-offs and deliver the highest value features as early aspossible. In addition, the constant, systemic testing that is part of XP ensures high quality via early defectdetection and spite of some early success with Agile methodologies, a number of factors are preventing their widespreadadoption. Agile methodology advocates often find it difficult to obtain Management support for implementingwhat seem like dramatic changes in application development. These methodologies require developers,managers and users alike to change the way they work and think. For example, the XP practices of pairprogramming, test-first design, continuous integration, and an on-site customer can seem like dauntingchanges to implement.

3 Furthermore, these methodologies tend to be developer-centric and seem to dismissthe role of Management in ensuring managers of several successful XP projects, we have found that strong Management is absolutely criticalto the successful adoption and application of Agile methodologies. But we have also discovered a lack ofalignment between the methodologies and tools of traditional Project Management and those of newer agilemethodologies. Furthermore, we believe this misalignment is symptomatic of a deeper problem differencesin fundamental assumptions about change, control, order, organizations, people and overall problem solvingapproach. Traditional Management theory assumes that: Rigid procedures are needed to regulate change Hierarchical organizational structures are means of establishing order Increased control results in increased orderOrganizations must be rigid, static hierarchies Employees are interchangeable parts in the organizational machine Problems are solved primarily through reductionist task breakdown and allocation Projects and risks are adequately predictable to be managed through complex up-front planningWithin this context, it is small wonder that the new methodologies appear informal to the point of beingchaotic, egalitarian to the point of actively fostering insubordination, and directionless in their approach toproblem solving.

4 We believe that the slow adoption of Agile methodologies stems mainly from this misalign-ment between the fundamental assumptions of traditional Management and those of the new Agile develop-ment methodologies. As such, we believe there is a significant need for a change in assumptions and a newmanagement framework when working with Agile 2003-2011 CC Pace Systems, All Rights Reserved4I. IntroductionIn the search for a new framework, we have come to believe strongly in emerging Management principlesbased on the new science of complexity that exploit an understanding of autonomous human behavior gainedfrom the study of living systems in nature. Specifically, we have begun to build the notion of complex adaptivesystems (CAS) into our Management assumptions and scientists have studied the collective behavior of living systems in nature such as the flocking ofbirds, schooling of fish, marching of ants and the swarming of bees.

5 They have discovered that, while theindividual agents in these complex adaptive systems possess only local strategic rules and capacity, theircollective behavior is characterized by an overlaying order, self-organization, and a collective intelligence thatis greater than the sum of the parts. The theory of CAS has been applied successfully in several areas economics, life sciences and more recently, to concepts of CAS led us to the inspiration that like the XP team, Project managers also need a set ofsimple guiding practices that provide a framework within which to manage, rather than a set of rigidinstructions. Following these practices, the manager becomes an adaptive leader setting the direction,establishing the simple, generative rules of the system, and encouraging constant feedback, adaptation, andcollaboration.

6 This Management framework, covered in detail in Section 4, provides teams implementing agilemethodologies with: An intrinsic ability to deal with change A view of organizations as fluid, adaptive systems composed of intelligent living beings A recognition of the limits of external control in establishing order, and of the role of intelligent control that employs self-organization as a means of establishing order An overall problem solving approach that is humanistic in that: It regards employees as skilled and valuable stakeholders in the Management of a team. It relies on the collective ability of autonomous teams as the basic problem solving mechanism. It limits up-front planning to a minimum based on an assumption of unpredictability, and instead, lays stress on adaptability to changing 2003-2011 CC Pace Systems, All Rights Reserved5II.

7 The Problem: Project Management as Uninspired TaskmasterTraditional software lifecycle development methodologies grew out of a need to control ever-larger developmentprojects, and the difficulties of estimating and managing these efforts to reliably deliver results. Thesemethodologies drew heavily on the principles from engineering such as construction Management . As aresult, they stressed predictability (one has to plan every last detail of a bridge or building before it is built),and linear development cycles requirements led to analysis which led to design which in turn led todevelopment. Along with predictability, they inherited a deterministic, reductionist approach that relied on taskbreakdown, and was predicated on stability stable requirements, analysis and stable design. This rigiditywas also marked by a tendency towards slavish process compliance as a means of Project these methodologies may have worked for some organizations in the past and may still work in somecircumstances, for many companies these methodologies only added cost and complexity while providing afalse sense of security that Management was doing something by exhaustively planning, measuring, andcontrolling.

8 Huge costs were sunk in premature planning, without the rapid iterative development andcontinuous feedback from customers that we have come to realize are prerequisites for success results are stark repeated, public failures such as the London Ambulance System and the DenverAirport Baggage system earned the software industry a reputation for being troublesome with huge costoverruns and schedule slippages. Consider the results of the Standish Group s CHAOS surveys. In the firstsurvey, it was estimated that only 18 percent of all software projects were considered successful, 31 percentwere failures and 53 percent were challenged. Comparatively, the 1998 figures showed a marked improvementin which 26 percent were successful, 46 percent were challenged and 28 percent were failures. The studyattributed the increase in success to scaling the size of projects back to manageable levels using smallerteams.

9 This result is clearly in line with the principles of Agile methodologies. Furthermore, we have foundthat many established Project Management practices still apply to Agile development projects with someadaptation and a strong dose of managers designed traditional methodologies in an effort to control projects, the technical communitygave birth to Agile methodologies in response to their frustrations with traditional Management (or lack thereof)and the resulting impact on their products and morale. For example, the principles of XP are focused almostentirely on the development process. While the technical community has championed these principles, verylittle has been written about the Management side of Agile development projects. The implication is that thereis little need for a Project manager since XP teams develop and monitor their own tasks.

10 No wonder thatcorporate Management has been skeptical of Agile methodologies and slow to embrace them. Managersconjure up an image of a room full of developers doing their own and the name eXtreme doesn t helpmatters either!Regardless of the particular methodology, the traditional Project manager is often seen as a taskmaster whodevelops and controls the master plan that documents (often in excruciating detail) the tasks, dependencies,and resources required to deliver the end product. The Project manager then monitors the status of tasks andadjusts the plan as necessary. Underpinning this mechanistic approach is the assumption that equatesindividuals to interchangeable, controllable for many managers comfortable with traditional methodologies, the prospect of implementing agilemethodologies on their development projects can be daunting. 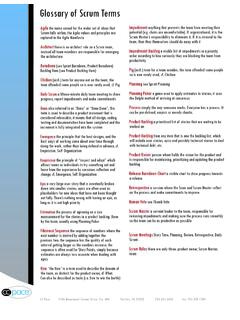 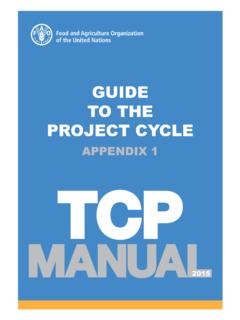 GUIDE TO THE PROJECT CYCLE - Food and … 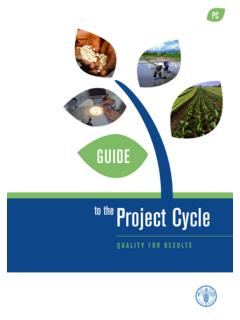 Guide to the Project Cycle - Quality for results

6 ProJeCt CyCle guide I. Application of the guide The present guide applies to Technical Cooperation and Emergency5 projects, including UN Joint Programmes, with the exception – for the time being 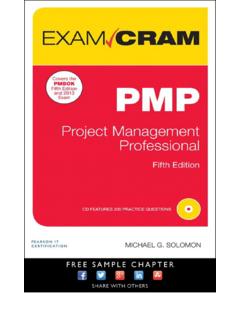 Project Management Guide What is in this guide? All development workers, and community organisations may at times work with development projects.