3 TheAmerican Nurses association (ANA) is dedicated to working with Nurses across thecountry to significantly reduce Needlestick and sharps injuries. Nurses should nothave to risk their lives every time they use a needle or sharps , as part of its ongoing Safe Needles Save Lives campaign, has created thisguide to help educate you and your colleagues about the risks of Needlestick injuriesand how to prevent them particularly through the evaluation, selection, and imple-mentation of safe needle and sharps devices. Chapter One details the exposure risksfrom injuries especially from HIV, hepatitis C virus (HCV), and hepatitis B virus(HBV) and how these injuries can be prevented.

4 It also outlines what steps youshould take after an injury and your legal rights and protections especially underthe federal 2000 Needlestick Safety and prevention Act. Chapters Two and Threefocus on how you and your colleagues cantake specific steps toward Needlestick pre-vention in your health care steps include creating a needlestickprevention committee, identifying and doc-umenting injuries, evaluating, selecting,and implementing safe devices, filing acomplaint with the Occupational Safetyand Health Administration (OSHA), andusing contract language. In 1999, ANA and the Training for the Development of Innovative ControlTechnologies Project (TDICT) partnered to develop training based on the TDICT process for the evaluation, selection, and implementation of safe devices.

5 ChapterThree outlines that process, developed from dozens of workshops held across thecountry and from material created during 10 years of research by TDICT, using theexpertise of frontline health care workers, especially book is dedicated to the hundreds of health care workers across the countrywho have fought for Needlestick prevention especially to those Nurses who them-selves have been infected with serious diseases from Needlestick and sharps injuriesand to those who died from those diseases. ANA also owes a special thanks to LyndaArnold, who started the inspirational, pioneering National Campaign for Health CareWorker Safety after she became infected with HIV from a Needlestick , we will continue the battle to protect health care workers, so that nursescan take care of patients without risking their own should not have torisk their lives every timethey use a needle orsharps nurse S STORYThe Unthinkable HappensIn 1997, Lisa Black, a 26-year-old nurse and single mom with two young daugh-ters, was excited about her career.

6 She had always wanted to be a nurse . Onenight, she was caring for a patient in the terminal stages of AIDS. She noticedthat his intravenous (IV) tube was backed up with blood and the line was quickly irrigate the line, she filled a syringe with saline and inserted the pre-attached needle into a rubber port on the patient s IV line. While Black wasattempting to aspirate the coagulating blood and then flush the IV line, the patientbecame startled and jerked, causing the needle to dislodge from the rubber port ofthe IV line. The needle punctured the palm of her left hand. She was followed protocol and immediately scrubbed the wound, reported her injury,and went to the emergency department.

7 She was started on a regimen of antiretrovi-ral medications and a protease inhibitor. She put up with the difficult side effects,thinking that if she just could getthrough the side effects and stay onthe post-exposure prophylaxis (PEP)protocol, she would not acquire months later, she began to feelill, and nine months and nine daysafter her injury, she was diagnosedwith HIV. Several months later, shelearned she also was infected withhepatitis C. Today, she is an active member ofher state Nurses association . She has devoted herself to educating others and fight-ing for occupational health and safety protections, so that other health care workerswill not have to suffer her Tragedy That Should Never Have HappenedLisa s injury was 100% preventable.

8 If her hospital had exclusively used needlelessIV systems, she never would have been injured and would not be taking over 20 pillsa day to fight her diseases. Lisa s story is just one of thousands. Today, thanks tothe efforts of ANA, state Nurses associations and other concerned health care work-ers, there is a federal law that mandates that health care facilities exclusively usesafe needle devices. Chapter One: The Information You NeedIf her hospital had exclusivelyused needleless IV systems,she never would have beeninjured and would not be taking over 20 pills a day tofight her Needlestick Safety and prevention Act was signed into law in November 2000and became effective in April 2001.

9 While it is too late for Lisa to be protected bythis law, it is not too late for you. By working with your colleagues, your state nursesassociation, and the ANA, you have the power to bring dramatic change to yourhealth care facility. You have the power to make sure that what happened to Lisanever happens to you or any of your BLOODBORNE PATHOGENEXPOSURE: THE RISKS FOR HEALTH CAREWORKERSE very day, health care workers are exposed to dangerous and deadly bloodbornepathogens through contaminated needlesticks, sharps, or splash exposures. It is one ofthe greatest risks faced by the frontline health care worker. Every percutaneous needle-stick and sharps injury carries a risk of infection from bloodborne pathogens.

10 Yet, theseexposures often have been considered part of the job. Health care workers primarily areexposed to these pathogens via contaminated Needlestick and sharps injuries. You proba-bly know at least one colleague who has sustained an injury, or perhaps you have beenstuck yourself. It is important that you and your colleagues fully understand these Facts About Occupational Infection:Every year, health care workers experience between 600,000 and 800,000 exposuresto blood (United States Department of Labor-Occupational Safety and HealthAdministration [USDOL-OSHA], 2001). Registered Nurses working at the bedsidesustain an overwhelming majority of these injuries (Perry, Parker, & Jagger, 2003). 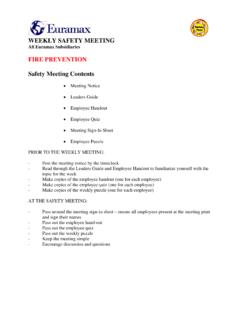 Counselor's Manual for Relapse Prevention With …

Data loss prevention Insights on governance, risk and compliance October 2011 Keeping your sensitive data out of the public domain 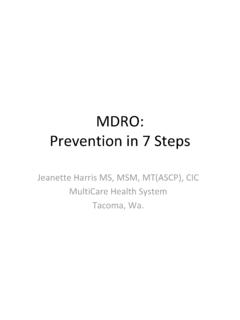 WHo Global report on falls Prevention in older Age

PAGE 1 WHO GLOBAL REPORT ON FALLS PREvENTiON iN OLDER AGE Chapter i. Magnitude of falls – A worldwide overview 1. Falls Falls are prominent among the exter-