iii BAR COUNCIL OF INDIA RULES TABLE OF CONTENTS PART I Pages Definitions 1 PART II Matters Relating to the Bar Council of India Chapter I. Election of the Members, Chairman and Vice

6 91 99. ( RULES under Section 49(1) (a), (i) and (j) of the Act). Rights of Practising Advocates to take up Law Teaching 99 100. ( RULES under Section 49A of the Act). Model Welfare Schemes 101 121. vii BAR COUNCIL OF INDIA RULES .. BAR COUNCIL OF INDIA RULES . RULES made by the Bar COUNCIL of INDIA in exercise of its rule making powers under the Advocates Act, 1961. PART-I. DEFINITIONS. Definitions: In these RULES , unless the context otherwise requires :- (a) Act' means the Advocates Act, 1961, as amended from time to time;. (b) Advocate' means an advocate entered in any roll under the provisions of the Act;. (c) Casual Vacancy' means a vacancy caused otherwise than by the expiry of the term;. (d) Chairman' means the Chairman of the Bar COUNCIL of INDIA .

7 (e) Clear days' means that time is to be reckoned exclusive of both the first and the last days;. Illustration :- The election of members to a State COUNCIL is fixed for the 15th January 1965. Under the RULES of the State COUNCIL , ballot papers have to be despatched 10 clear days before the date of election. Consequently the last date for the despatch of ballot papers will be 4th January, 1965. (f) COUNCIL ' means the Bar COUNCIL of INDIA ;. (g) Prescribed' means prescribed by the RULES ;. (h) RULES ' means the RULES made by the COUNCIL ;. (i) Secretary' means the Secretary of the Bar COUNCIL of INDIA and includes any person howsoever designated and entrusted for the time being with the duties of the Secretary;. (j) State COUNCIL ' means a Bar COUNCIL constituted under Section 3.

8 Of the Act;. (k) Vice-Chairman' means the Vice-Chairman of the Bar COUNCIL of INDIA . PART-II. 1. BAR COUNCIL OF INDIA RULES .. MATTERS RELATING TO THE BAR COUNCIL OF INDIA . CHAPTER-I. ( RULES under Section 15 (2), (c), (d), (f) and (g) read with Sections 4. and 10B of the Act.). A. Election of Members of the COUNCIL 1. Notice of every meeting of the COUNCIL and committees shall ordinarily be sent by the Secretary not less than 15 days before the date of the meeting except when the Chairman requires a meeting to be called on short notice on grounds of urgency. If any five or more members of the COUNCIL require in writing, a meeting to be called on short notice of not less than 10 days for consideration of specified matters, the Secretary shall convene the meeting on such date as requisitioned and the agenda for such meeting shall include matters specified by such members. 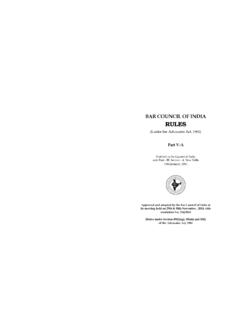 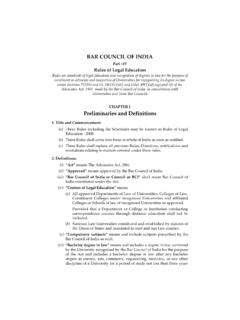 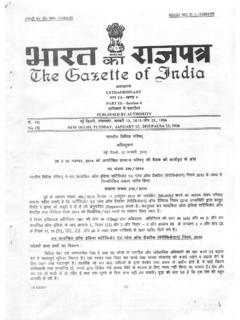 Certificate and Place of Practice ... - Bar Council of … 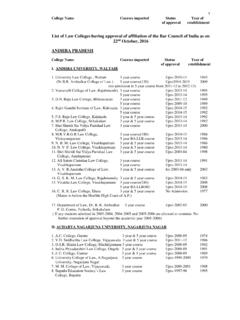 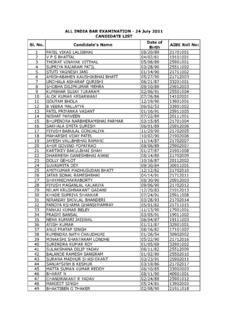 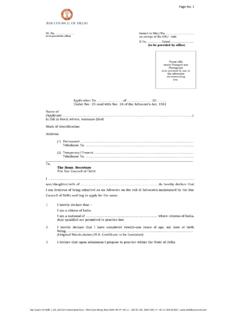 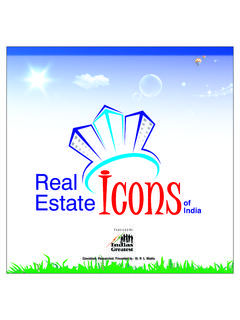 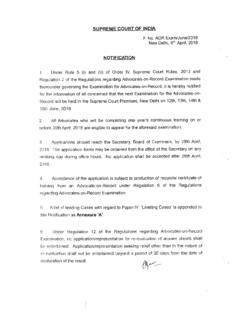 SUPREME COURT OF INDIA F. No. AOR Exam/June/2018 New Delhi, 6th April, 2018 NOTIFICATION 1. Under Rule 5 (i) and (ii) of Order IV, Supreme Court Rules, 2013 and Regulation 2 of the Regulations regarding Advocates-on-Record Examination made

496 Stamp [1957: KAR.ACT 34 Rs. 250 is payable to the Bar Council, it is proposed to fix the Stamp duty on the certificate of enrolment at Rs. 250. Opportunity has been taken to make certain other provision found

5 b) must hold a degree of Bachelor of Law of any University established by Law in India and recognized as such under the Advocates Act, 1961;