Better Consumer Protection Under the Statutory In …

Better Consumer Protection Under the Statutory In Duplum Rule By Michelle Kelly-Louw*. [Editor's Note: In April I attended the 11th International 1998 (1) SA 811 SCA; unless otherwise indicated, all further Conference on Consumer Law, presented in Cape Town, South references to Standard Bank v Oneanate Investments will be to the Africa, by the International Association of Consumer Law and decision on appeal). the Centre for Business Law, College of Law, University of South So, the common-law in duplum rule implies that the Africa. At the Conference, I heard a presentation regarding the total amount of unpaid interest on a loan or credit transaction in duplum rule, a concept that stops the running of interest may accrue only to an amount equal to the outstanding capital when unpaid interest equals the outstanding capital balance.]

1 Better Consumer Protection Under the Statutory In Duplum Rule By Michelle Kelly-Louw*. [Editor's Note: In April I attended the 11th International 1998 (1) SA 811 SCA; unless otherwise indicated, all further Conference on Consumer Law, presented in Cape Town, South references to Standard Bank v Oneanate Investments will be to the Africa, by the International Association of Consumer Law and decision on appeal). the Centre for Business Law, College of Law, University of South So, the common-law in duplum rule implies that the Africa. At the Conference, I heard a presentation regarding the total amount of unpaid interest on a loan or credit transaction in duplum rule, a concept that stops the running of interest may accrue only to an amount equal to the outstanding capital when unpaid interest equals the outstanding capital balance.]

2 Sum, and that all arrear interest ceases to run when that interest I found the discussion to be very interesting and asked the has reached the outstanding capital amount. (See Sanlam Life presenter if the Journal could publish her paper. She agreed, and Insurance Ltd v South African Breweries Ltd 2000 (2) SA 647. what appears below is her original paper, formatted consistent (W) at 652G-I). The rule does not mean that a creditor (ie, with South African rules of style. I hope you nd the discussion the lender) is prevented by the rule from collecting more than as interesting as I did. ] double the unpaid (or paid) capital amount in interest, as long as he at no time allows the unpaid interest to reach the unpaid capital amount.

3 However, should this escalation occur, interest 1 Introduction would then cease to run. Once payments on the account are again made and the interest element of the total amount owed is The common-law in duplum rule, as it is generally decreased, the interest can start running again until it equals the known in South African law, provides that interest stops running outstanding capital. (see Monica L Vessio A Limit on the Limit when unpaid interest equals the outstanding capital amount. on Interest? The in duplum Rule and the Public Policy Backdrop If the total amount of unpaid interest (both contractual and (2006) 39 De Jure 25 at 26 and 36). It is thus clear that the rule default interest: our courts apply the limitation to both kinds only prevents the interest from running on a temporary basis of interest: see Stroebel v Stroebel 1973 (2) SA 137 (T); and and does not set a maximum amount of interest that may be Administrasie van Transvaal v Oosthuizen & 'n Ander 1990 (3) SA charged.)

4 (idem at 36). 387 (W)), has accrued to an amount equal to the outstanding It is settled that the common-law in duplum rule forms capital sum, the defaulting debtor (ie, the borrower of the part of the modern South African law. (See Union Government money) must rst start making payments on his loan again (and v Jordaan's Executor 1916 TPD 411; Van Coppenhagen v Van so decrease the interest amount), after which interest may once Coppenhagen 1947 (1) SA 576 (T); Stroebel v Stroebel supra; LTA. again accrue to an amount equal to the outstanding capital sum. Construction Bpk v Administrateur, Transvaal 1992 (1) SA 473. The rule thus e ectively prevents unpaid interest from accruing (A) at 482, discussed by JM Otto Die Gemeenregtelike Verbod further once it reaches the unpaid capital sum.

5 Even if interest teen die Oploop van Rente (1992) 55 Tydskrif vir Hedendaagse is capitalised (and interest is therefore charged on interest), the Romeins-Hollandse Reg 472; ABSA Bank Ltd v Leech & Others capitalised interest does not lose its character as interest and NNO 2001 (4) SA 132 (SCA); and Standard Bank v Oneanate become part of the capital amount for purposes of applying Investments supra at 827G-H). the in duplum rule. (See Standard Bank of SA Ltd v Oneanate In the recent past there have been a number of Investments (Pty) Ltd 1995 (4) SA 510 (C), in particular at 560 decisions dealing with and explaining the application of the and 566-72; con rmed on appeal in Standard Bank of South common-law in duplum rule.

7 But it provides Bank van Suidelike Afrika Bpk 1999 (1) SA the creditor. him with temporary relief only, as 515 (SCA), discussed by WG Schulze Can a the escalation of the ever-continuing Borrower Waive the Bene ts of the In Duplum Rule? (1999) 11 interest is merely tempered by the rule. (See Vessio op cit at 36). SA Merc LJ 109; Sanlam Life Insurance v South African Breweries The common-law in duplum rule is not limited to supra; ABSA Bank v Leech supra; Commissioner, South African interest on money-lending transactions. In fact, it applies with Revenue Service v Woulidge 2002 (1) SA 68 (SCA); Meyer v equal force to all types of contract in terms of which a capital Catwalk Investments 354 (Pty) Ltd & Andere 2004 (6) 107 (T); sum is due by the debtor to the creditor and on which amount a and Verulam Medicentre (Pty) Ltd v Ethekweni 2005 (2) SA speci c rate of interest is payable.

8 One such an example is where 451 (D), discussed by Vessio op cit, and its appeal sub nom a debtor owes money to a creditor in terms of a contract of Ethekwini Municipality v Verulam Medicentre (Pty) Ltd [2006] 3 letting and hiring of work on which interest is payable. (See LTA. All SA 325 (SCA), both decisions analysed by WG Schulze The Construction v Administrateur, Transvaal supra at 482I-483A; GF. in duplum Rule: A Short List of Some Unresolved Issues (2006) Lubbe Die Verbod op die Oploop van Rente ultra duplum n 18 SA Merc LJ 486 and Heinrich Schulze Are there Exceptions Konkretisering van die Norm van Bona Fides? (1990) 53 Tydskrif to the in duplum Rule? (2006) 14 Juta's Business Law 20).

9 Vir Hedendaagse Romeins-Hollandse Reg 190 at 200; Schulze The in duplum rule is based on public policy, as (2006) 14 Juta's Business Law 20 at 20; Schulze (2006) 18 SA. its purpose is to protect the debtor from exploitation by the Merc LJ 486 at 487; and Vessio op cit at 26-7). creditor. (See Standard Bank v Oneanate Investments supra at Until now debtors could rely only on the common- 828D; and Vessio op cit at 35-6 for a discussion of the role of law in duplum rule to protect them from exploitation by public policy and Consumer Protection in the rationalisation their creditors. However, from 1 June 2007 (see Proc 22 in of the perpetual application of the rule). It has been held that Government Gazette 28824 of 11 May 2006) they will be able to this rule is part of our daily economic life where it ful ls the rely on the Protection a orded by the Statutory in duplum rule useful function of assisting debtors in nancial di culties.

10 As set out in s 103(5) of the National Credit Act 34 of 2005. (See LTA Construction v Administrateur, Transvaal supra at The Statutory rule drastically alters the common-law Journal of Consumer & Commercial Law 21. rule and provides for Better Protection for debtors (or rather, for administration costs incurred because of the Consumer having the consumers of credit: the term Consumer is used in the Act to defaulted Under the credit agreement: see 1; eg, this will refer describe a debtor, and it will so be employed here) against their to the costs of a notice of default letter sent to a Consumer in creditors (or rather, credit providers, the term used in the Act). terms of 129(1)(a)); and This analysis sets out brie y to explain the practical collection costs (see 101(1)(g) read with application of the new Statutory in duplum rule and to address reg 47 on the permitted collection costs that may be charged certain problems that credit providers may experience when the (collection costs refer to the amounts, ie, legal fees, that a credit rule is applied.)) 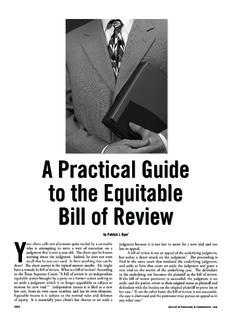 A Practical Guide to the Equitable Bill of Review

38 Journal of Texas Consumer Law fees. After reviewing congressional history, as well as the Civil Justice Reform Act of 1990, the Fifth Circuit found that there was no … 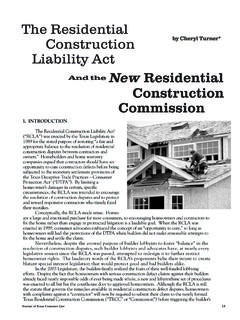 And the New Residential Construction Commission …

Journal of Texas Consumer Law 15 The definition of a “homeowner” is found in section 401.002 and it too differs from the RCLA. Under the TRCCA, a …

58 Journal of Consumer & Commercial Law TABLE OF CONTENTS I. OVERVIEW AND BACKGROUND .....59 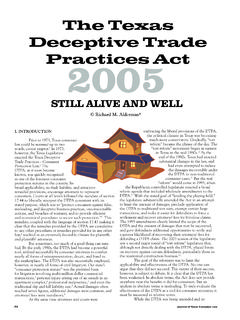 74 Journal of Texas Consumer Law 2005 I. INTRODUCTION Prior to 1973, Texas consumer law could be summed up in two words, caveat emptor.1 In 1973, however, the Texas Legislature enacted the Texas Deceptive 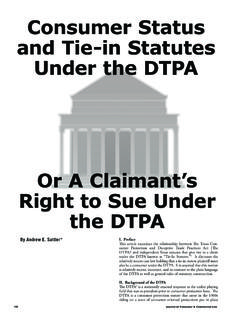 Consumer Status and Tie-in Statutes Under the DTPA

18 w I. Preface This article examines the relationship between The Texas Con-sumer Protection and Deceptive Trade Practices Act (The DTPA)1 and independent Texas statutes that give rise to a claim 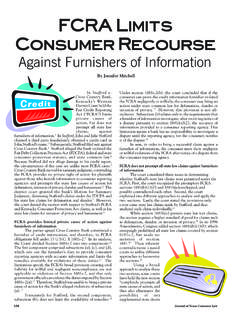 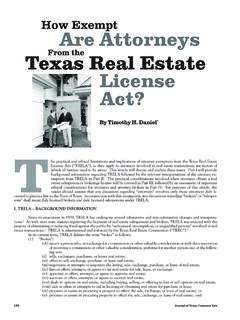 real estate incidental to the normal practice of their profes- ... The courts of California have also held that attorneys ... Activities such as examining real property and commencing negotiations regarding the purchase or sale of real property were. 140 Journal of Texas Consumer Law 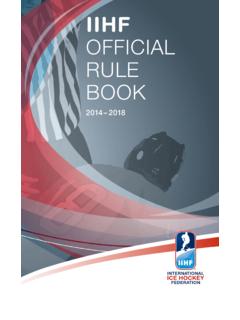 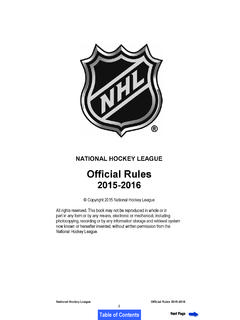 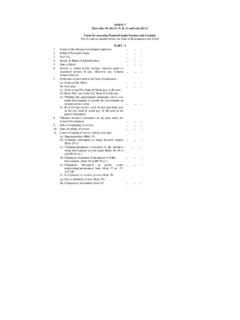 ii Rule 4.5. Entries of Appearance and Withdrawals by Members or Employees of Law Firms or Professional Corporations..... 11

PART 1200 - RULES OF PROFESSIONAL CONDUCT RULE 1.0. Terminology (a) “Advertisement” means any public or private communication made by or on behalf of a lawyer or law firm about that lawyer or law firm’s services, the

RULES OF SUPERINTENDENCE FOR THE COURTS OF …

RULES OF SUPERINTENDENCE FOR THE COURTS OF OHIO RULE 1 Applicability: Authority; Citation 2 Definitions 3 Designation or Election of Presiding Judge

Rules of Practice and Procedure - California