3 And Main Pools and Fluxes in Global Sulfur Cycle Indicators of Their Functionality *This appears in Appendix A at the end of this volume. Nutrient Cycling 333. Main Messages This Chapter deals mainly with nitrogen, sulfur, phosphorus, and carbon all elements needed in relatively large quantities (the so- An adequate and balanced supply of elements necessary for life, pro- called macronutrients), and with cycles that have been substan- vided through the ecological processes of Nutrient Cycling , underpins all tially altered by human activities. Emerging issues related to iron other ecosystem services. The cycles of several key elements phosphorus, and silicon will also be addressed. Broadly speaking, nutrients can occur in gaseous form (such nitrogen, sulfur, carbon, and possibly iron and silicon have been substantially as N2, CO2), mineral form (such as apatite, the main P-containing altered by human activities over the past two centuries, with important positive mineral), inorganic ionic form (NH4 , NO3 , SO42 , H2PO4 ), and negative consequences for a range of other ecosystem services and for and organic form (bound into various C-based compounds in liv- human well-being.)

4 Ing or dead organisms or their products). Nutrients are mostly taken up by plants in the ionic form and by animals in organic In preindustrial times, the annual flux of nitrogen from the atmosphere to the forms through consumption of living or dead tissues; microorgan- land and aquatic ecosystems was 90 130 teragrams (million tons) per year. isms in general may use nutrients in any mineral or organic form, This was more or less balanced by a reverse denitrification'' flux. Production with sometimes high degrees of specialization at the guild or spe- and use of synthetic nitrogen fertilizer, expanded planting of nitrogen- cies level. The interconversion between forms is mediated by the fixing crops, and the deposition of nitrogen-containing air pollutants ecosystem. have together created an additional flux of about 200 teragrams a year, Nutrient Cycling describes the movement within and between only part of which is denitrified.

5 The resultant N accumulation on land and the various biotic or abiotic entities in which nutrients occur in the in waters has permitted a large increase in food production, but at the cost global environment. These elements can be extracted from their mineral or atmospheric sources or recycled from their organic of increased emissions of greenhouse gases and a frequent deterioration in forms by converting them to the ionic form, enabling uptake to freshwater and coastal ecosystem services, including water quality, fisheries, occur and ultimately returning them to the atmosphere or soil. and amenity value. Nutrient Cycling is enabled by a great diversity of organisms and leads to creation of a number of physical structures and mecha- Phosphorus is also accumulating in ecosystems at a rate of nisms that regulate the fluxes of nutrients among compartments. teragrams per year, which compares with the preindustrial rate of 1 6 These structures and processes act as buffers to limit losses and teragrams of phosphorus a year, mainly as a result of the use of mined transfers to other ecosystems, as described later.

6 Nutrients are dis- P in agriculture. Most of this accumulation is occurring in soils, which may tributed among a large number of living or dead compartments, then be eroded into freshwater systems, causing deterioration of ecosystem and their relative abundance among these compartments is typical services. This tendency is likely to spread and worsen over the next decades, of certain ecosystems. For example, this is the case in terrestrial since large amounts of P have accumulated on land and their transport to ecosystems, where nutrients may be greatly concentrated in living water systems is slow and difficult to prevent. biomass (such as tropical rainforests) or in humus and soil organic matter (such as tundra ecosystems) (Lavelle and Spain 2001). Fertility is the potential of the soil, sediment, or water system Sulfur emissions have been progressively reduced in Europe and North to supply Nutrient elements in the quantity, form, and proportion America but not yet in the emerging industrial areas of the world: China, required to support optimum plant growth (implicitly, in the con- India, South Africa, and the southern parts of South America.)

7 A global text of ecosystem services, for human benefit). The largest flux Assessment of acid deposition threats suggests that tropical ecosystems are of nutrients is their release from organic materials, as a result of at high risk. Human-induced alteration of the iron and silicon cycles is less well decomposition by microbial communities. This flux may not be understood, but it is believed, with medium certainty, to be a significant factor measurable, as part of it may be immediately reincorporated in in altering the productivity of the ocean. This may be a significant benefit to microbial biomass. Microbial activity depends primarily on the the service of carbon sequestration. availability of a food source and on regional and local climatic, edaphic, or hydrological factors. Locally, biological parameters Human actions, many associated with agriculture, have increased the such as the chemical composition of the organic material (which leakiness'' of ecosystems with respect to nutrients.

8 Tillage often dam- depends in turn on the plant community that produced it) and ages soil structure, and pesticides may decrease useful nontarget organisms, the soil invertebrates present act as proximate determinants. The maintenance of fertility is a supporting service for the increasing Nutrient leaching. Simplification of the landscape and destruction of production of food, timber, fiber, and fuel. It is also necessary for riparian forests, wetlands, and estuaries allow unbuffered flows of nutrients ecological processes such as succession and for the persistence and between terrestrial and aquatic ecosystems. Specific forms of biodiversity are stability of ecosystems. In systems intensively managed by hu- critical to the performance of the buffering mechanisms that ensure the efficient mans, such as cultivated systems, the inherent fertility of ecosys- use and Cycling of nutrients in ecosystems.

9 Tems is supplemented through fertilization and management practices, such as the use of N-fixing plants, the acceleration of In contrast to the issues associated with Nutrient oversupply, there re- microbial processes by tillage, the addition of suitable organic in- main large parts of Earth, notably in Africa and Latin America, where puts to the soil, and, in many parts of the world, biomass burning. harvesting without Nutrient replacement has led to a depletion of soil Fertilization is the input of nutrients to a system by humans, fertility, with serious consequences for human nutrition and the environ- deliberately or as an unintended consequence of other activities. ment. It includes supplements of N, P, S, potassium, calcium, magne- sium, and micronutrients for agriculture; atmospheric N and S. deposition; and the effects of elevated CO2 in the atmosphere. Introduction Iron fertilization in the ocean has been performed experimentally (Coale et al.)

10 1996; Moore et al. 2001). Nutrients comprise the 22 or so chemical elements known to be It is possible to have an excessive supply of nutrients. In essential for the growth of living organisms. (See Table ) aquatic systems, this condition is known as eutrophication. Eutro- The list varies somewhat because some elements are only needed phication, usually resulting from leaching of nutrients from soils in very specific groups of organisms or specific circumstances. managed for agriculture, is a form of nonvoluntary fertilization of 334 Ecosystems and Human Well-being: Current State and Trends Table Major Elements Needed for Plant Growth and Their Concentrations in Plants, the Upper Meter of Soil, and Ocean Water (Fortescue 1980; Bohn et al. 1979). Content in Elemental Form ( g/g ). Element Plant Soil Ocean Major Forms Biological Function/Source Macronutrients (> % of dry mass). 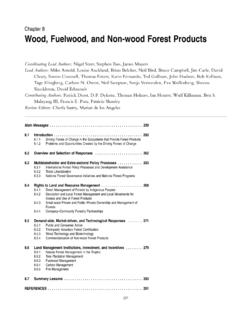 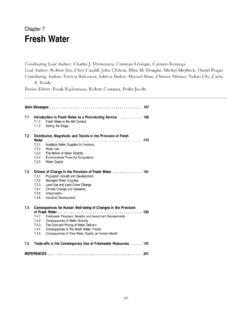 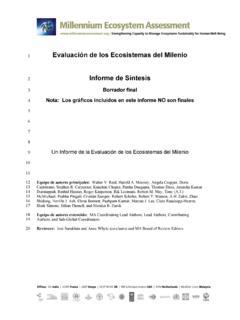 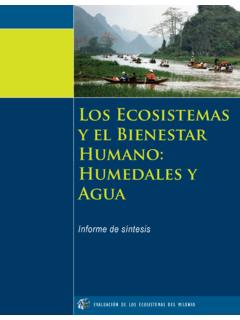 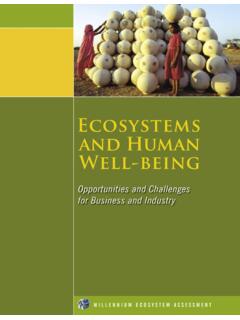 Ecosystems and Human Well-being: Opportunities and Challenges for Business and Industry 3 People everywhere rely on ecosystems and the services they provide. So do businesses. Demand for these services is increasing. However, many of the world’s ecosystems are in seri- 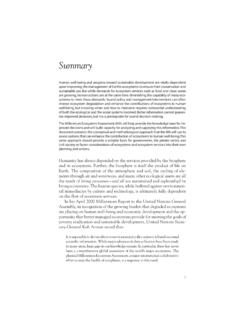 Ecosystems and Human Well-being: A Framework for …

tory Species, and the Ramsar Convention on Wetlands plan to use the findings of the MA, which will also help meet the needs of others in gov-ernment, the private sector, and civil society. The MA should help to achieve the United Nations Millennium Development Goals and to carry out the Plan of Implementation of the 2002 World Summit on Sustain-

2 Ecosystems and Their Services

2 Ecosystems and Their Services EXECUTIVE SUMMARY An ecosystem is a dynamic complex of plant, animal, and microorganism com- munities and the nonliving environment, interacting as a functional unit. Hu-mans are an integral part of ecosystems. A well-defined ecosystem has strong interactions among its components and weak interactions across its boundaries.

coordination with the MA Board of Review Editors, which engaged external reviewers, government representatives, and the secretariats of key multilateral environmental conventions. The report was formally approved by the MA Board in March 2005. The Desertiﬁcation Synthesis is underpinned by the conceptual framework for the MA, which assumes that

Human, Well, Board, Ecosystems, Begin, Ecosystems and human well being 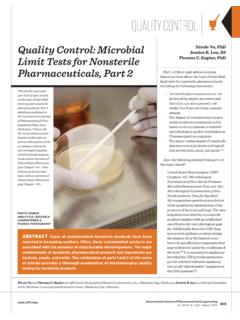 1 Chapter 6: Microbial Growth Microbial Growth: 4Refers to an increase in cell number, not in cell size. 4Bacteria grow and divide by binaryfission, a rapid and relatively simple process. 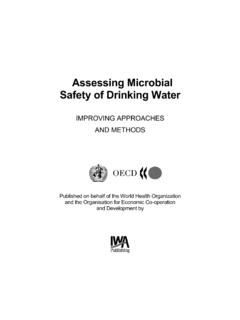 Indicators of microbial water quality 291 uses for indicator micro-organisms with a view to their role in the management of waterborne microbial risks. 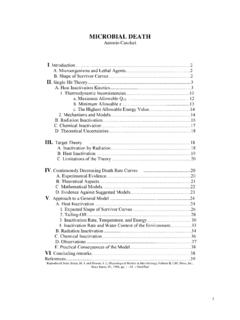 2 I. INTRODUCTION Microbial inactivation studies seem to be dominated by the exponential-single hit and multitarget theories, the former being applied mostly to heat inactivation kinetics and the latter to microbial