2 As a result, most operators try to match their target market's tastes as closely as possible to gain maximum foot traffic. For example, a liquor store in a blue collar area of Detroit, MI may not need to provide as much cus- tomer service as a liquor store in Greenwich, CT where many of the patrons are the wealthiest individuals in America. Although the types of liquor stores vary by state, due to government regu- lations, liquor stores are popular throughout the nation. In some states, operators of liquor stores may be the sole retailers of certain types of alcoholic beverages, which reduces the degree of competition from parallel retailers.

3 However, in states such as California, retailers compete directly with grocery stores, conve- nience stores, wholesalers, online retailers, and other liquor stores, as well as bars and restaurants, all of whom can retail the same types of alcoholic bever- ages. In the face of competition from such a large variety of venues, some opera- Discount Operations tors choose to compete on a discount level in the United States. These operators maintain their discount Operations in the to serve patrons who are willing to sacrifice time, convenience and customer service to get the cheapest possible price on their alcoholic beverages.

4 Such stores typically have a similar product mix to a standard liquor store but with a slight bias towards lower end products. Also, the liquor store industry is moving towards consolidating smaller Consolidation of Smaller liquor stores into larger chains or replacing them completely with large whole- Stores saler type stores in states which allow the practice. Chains and large stores enable an operator to present a wider variety of alcoholic beverages appealing to 39. Financial Statements & Operations several segments of the market, while providing lower prices due to their nego- tiating power with local distributors.

5 Some operators have generated additional revenue through in-store pro- motions for certain suppliers as well as providing spirits tastings in states which permit this practice. However, a typical liquor store operator does not rely as much on advertising as it does on the store's location. Stores with good loca- tions rely heavily on the ability of the surrounding retailers and attractions to bring in new patrons and increase sales. Operating Revenue From Liquor Stores Liquor Store's Revenue Liquor stores generate their revenue primarily from the sale of alcoholic bever- Sources ages, tobacco products and miscellaneous food item sales.

6 A list of the different sources of revenue and expenses from the operation of a liquor store along with a typical range calculated as a percentage of total sales can be seen in Table 2-1. on page 41. Product Sales Alcoholic beverage sales are an operator's largest revenue source, typically representing up to 90% of total revenues. Most operators have devoted consid- erable management effort to increasing alcoholic sales and improving the gross profit margins by promoting higher-margin products such as high-end vodka and related spirits.

7 Advertising Revenue Liquor stores have the ability to provide in-store advertising for suppliers of alcoholic beverages in order to promote a certain product line (depending on state). Revenues are primarily contingent upon the success of the sales efforts, as well as upon the location of the store and foot traffic which the store receives. Other Revenue Streams Operators actively engage in efforts to develop revenue streams in addition to alcoholic beverages, tobacco and food item sales. Some operators have offered spirits tastings, custom wine cellar designing services, or even delivery services to gain additional revenues.

8 However, it must be noted that income from wine tastings are typically not shown as revenue on the books and usually goes into the owner's back pocket (unreported skim ). Lastly, lottery tickets have recently become a stable revenue source. Operating Expenses From Liquor Stores Operating Costs Primary operating costs include: 1. Rent, 2. Costs of goods sold, 3. Salaries, wages and compensation of staff 40. Financial Statements & Operations Rent costs vary depending on the location of the facility, but they are typi- Rent cally proportional to the median cost of housing in the immediate market.

9 How- ever, in general, larger grossing liquor stores benefit from higher volume and sales per square foot. Thus, as a percentage of sales, rent is typically - of annual revenue annually for liquor stores with revenues over $750,000. Under that figure, rent begins comprising a larger portion of revenues, with a range of - Product costs include direct product costs and promotional expenses. Costs Cost of Products Sold remain similar among stores with sales ranging from $100,000 to over a $1 mil- lion, as a percentage of sales.

10 Larger wholesaler type stores can possibly reduce the industry average of cost of goods sold to 78%1 depending on the volume and state they are operating within; however, many states regulate the quantity dis- counts to protect smaller liquor stores. Table 2-1:Revenue & Expense Summary (As a % of Sales). Range Income/Expense Item (Beer, Wine, and Liquor Stores). Revenue percentage of sales Alcohol Sales 85%-90%. Tobacco Products 5%-8%. Grocery & Other Food Items 2%-6%. Immediate Consumption Food Items - 1%.

13 Chapter 1: Overview of the Liquor Store Industry A macro overview of the liquor industry and the economy are critical starting points for any valuation analysis. 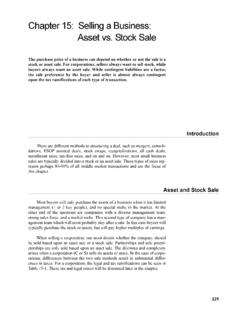 329 Chapter 15: Selling a Business: Asset vs. Stock Sale The purchase price of a business can depend on whether or not the sale is a stock or asset sale.

41 Chapter 2: Analyzing a Dealership’s Financial Statements & Operations To analyze a dealership’s operations, a close look must be taken at the day

Business Valuation (Adjusted Book Value or Cost Approach) 67 cess” inventory gets special treatment. It may be approached either from its cost

77 Chapter 4: Liquor Store Business Valuation In this section, we will utilize three approaches to valuing a liquor store. These approaches are the: (1) cost (asset based), (2) market, and (3) income 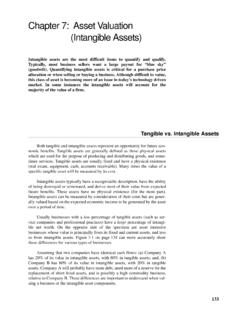 133 Chapter 7: Asset Valuation (Intangible Assets) Intangible assets are the most difficult items to quantify and qualify. Typically, most business sellers want a … 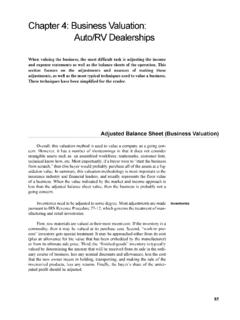 Business Valuation: Auto/RV Dealerships 86 If the company is using the FIFO (first in, first out) method of inventory, then one may utilize the … 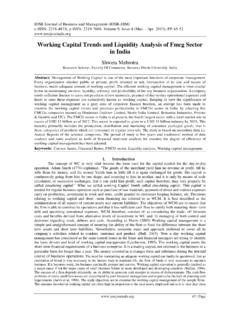 How can you tell if you might benefit from EY’s working capital assessment? Does your working capital work for or against you? Consider the following performance indicators, then check how each applies to your 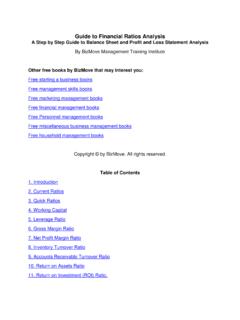 Guide to Financial Ratios Analysis A Step by Step …

The main question this ratio addresses is: "Does your business have enough current assets to meet the payment schedule of its current debts with a margin of safety for

Based on our experience of running similar Ready …

Based on our experience of running similar exercises and our insight into the supervisory process, EY is well positioned to help banks prepare for the BMA exercise. 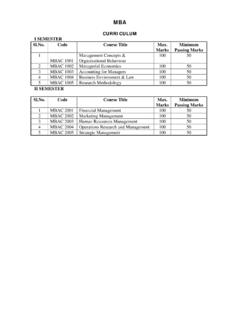 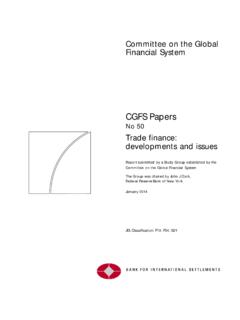 Committee on the Global Financial System

Committee on the Global Financial System CGFS Papers No 50 Trade finance: developments and issues Report submitted by a Study Group established by the