2 The Communication process is fundamental for human survival. It is essential to the development of the individual, to the formation and continued existence of groups and to the interrelations among groups. Communication is as old as human history; many indicators prove that effective Communication is the main factor enhancing civilization through history. This is why Communication is considered multi-culture phenomena, Ancient Greeks, Ancient Egyptians, Ancient Chinese, Arabs, Europeans and Americans have got their impact on Communication . On the other hand, the study of human Communication is inter-disciplinary.

3 It began with the mathematically theory of Communication by Claude E. Shanon and Warren Weaver in 1949, scientists considered as strictly mathematical. Their aim was to measure the amount of information, in the mess ages, that is transmitted through the media on the telephone; however, as years passed by, inter-disciplinary approaches to study human Communication came up. They rely on psychology, sociology, speech Communication , political, journalism, anthropology management, education, marketing and philosophy. Thus, we can say that every discipline concerned with human behavior must deal with Communication .

7 They can not be regarded as unchanging elements in time and space. This simply means that no single aspect of Communication can be meaningfully understood apart from the other elements, as shown in Figure Figure : Definition of Communication B) Interaction: It is the process of linking between senders and receivers of the message. The process specifies interaction or linkages between or among countless factors, so that the changes in any set of forces affect the operation of all other processes to produce a total effect. The concept of interaction is central to an understanding of the concept of process in Communication .

8 Communication is an attempt to bridge the gap between two individuals through producing and receiving messages which have meaning for both. C) Social Context: Human Communication is, to a great extent, influenced by the social context in which it occurs. The context or the situation that consists of a set of rules which govern the origin, flow and effect of the messages. Communication model It describes what is necessary for an act of Communication to take place. A model represents the major features and eliminates the unnecessary details of Communication . Is a process used to timely and properly exchange information to achieve a desired goal?

10 The person who speaks. 2. The speech that he produces. 3. The person who listens. One of the most used The contemporary models was developed in 1949 by Claude Shannon, a mathematician and explained by the non-mathematician, Warren Weaver. Shannon and Weaver were not talking about human Communication but about electronic Communication . In fact, Shannon was working for the Bell telephone laboratory, but his model was found useful in describing human Weaver model is consistent with Aristotle s position, see Figure If we translate the source into the speaker, the signal into the speech and the destination into listener, we have the Aristotelian model , plus two added ingredients: a transmitter which sends out the source s message and a receiver, which catches the message from destination. 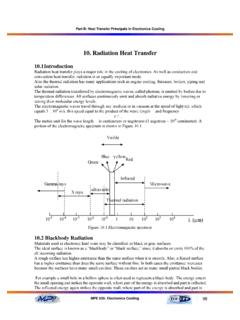 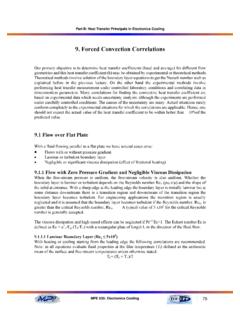 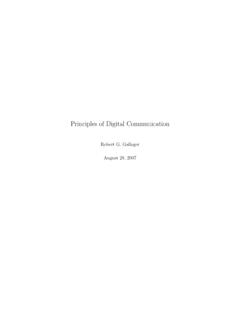 these toy models are then related to actual communication systems and this is used to generalize the models. We then iterate back and forth between analysis of models and creation of models. Understanding the performance limits on classes of models is essential in this process. There are many exercises designed to help understand each topic. 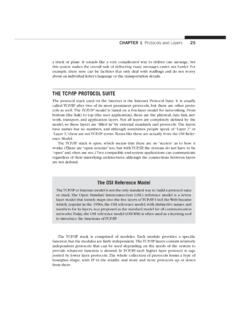 The TCP/IP protocol stack models a series of protocol layers for networks and systems that allows communications between any types of devices. The model consists of ﬁ ve separate but related layers, as shown in Figure 1.9. The Internet protocol suite is based on these ﬁ ve layers. TCP/IP says most about the network and transport layers, and a 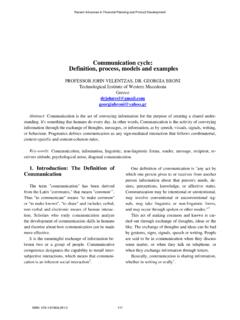 Communication cycle: Definition, process, models and examples PROFESSOR JOHN VELENTZAS, DR. GEORGIA BRONI Technological Institute of Western Macedonia Greece drjohnvel@gmail.com . georgiabroni@yahoo.gr . Abstract: Communication is the act of conveying information for the purpose of creating a shared under-standing. It's something that … All activities are based on the elements of effective communication applied to starting and operating a microenterprise. Agenda – topics to be covered in the module and length of each item Topic: Communication Time Allotted: 8 hours A. Communication (45 minutes) B. Active Listening (3.5 hours) Communication Models . SPIKES: A six-step protocol for delivering bad news. The SPIKES protocol . S - Set up the interview: Plan ahead for details such as being sure that you are in a private, comfortable setting, that significant others are involved (if the patient wants that), and that your pager is silenced. P -