3 ( ) in ham Net annual Ground Water availability 79141. Gross Annual Ground Water Draft for all uses 63383. Projected Demand for Domestic and Industrial 3449. Uses upto 2033. Stage of Ground Water Development 80 %. 13 EFFORTS OF ARTIFICIAL RECHARGE &. RAINWATER HARVESTING. Projects completed by CGWB (No.) 4. Projects under technical guidance of CGWB 5. (Numbers). 14 Ground Water Control And Regulation Number of OE Blocks 02 ( DEWAS & Sonkutch). Number of Semi-Critical Blocks 01 (Khategaon). Number of Notified Blocks Nil Introduction The DEWAS DISTRICT lies in the Central part of the state and covers an area of sq km. It lies between North latitude 22o17'00 & 23o20'00 and east longitude 75o50'00 & 77o10'00 , falling in Survey of India topo sheet Nos 46M, 46N, 55A, 55B & 55F. The Tropic of Cancer passes through the DISTRICT near Nemawar village south of Khategaon town. DEWAS lies north-east of Indore, south-east of Ujjain and southwest of Shajapur. The city is located on the level plains of the Malwa plateau; to the south, the land rises gently to the Vindhya Range, which is the source of the Chambal and Kali Sindh rivers.

4 The DISTRICT is divided into six Tehsils and six development Blocks. There are 1061 villages and 11 towns in the DISTRICT . Table: Administrative Divisions, DISTRICT DEWAS , S No Block Area (Sq Km) No of towns 1. Bagli 3. 2. DEWAS 1. 3. Kannod 4. 4. Khategaon 1. 5. Sonkatch 2. 6. Tonk khurd - SOIL : Almost three fourths of the area in the DISTRICT is covered by black cotton soils, which is occupied by Deccan Basalts. The southern part has red- yellow mixed soils derived from sandstone, shale, gneiss. The alluvial soils are found along the river courses. The higher elevations the hilly regions have a cover of murum, which comprises small rounded pieces of weathered trap. The Vindhyans and Bijawars have a thin cover of sandy loams. The soils in granitic area are clayey. The schist has a thin capping of loam with lot of quartz grains. The alluvium is derived from hill slopes by numerous streams and watercourses. DRAINAGE: The DISTRICT falls under two major drainage basins - the Ganga in the north and the Narmada in the south.

5 The rivers are rivers of antiquity. They have broad, flat, shallow valleys with low imperceptible gradients, because their channels have reached the base level of erosion. Vertical erosion has ceased and lateral erosion is taking place. IRRIGATION: Ground Water is the main source of irrigation and accounts for 82% of the irrigation. Other sources and ponds contribute a small amount . 18%. Only 50% of the net sown area is irrigated. Thus 50% sown area is rain- fed. CROPPING PATTERN : The principal crop grown in the DISTRICT is soyabean, wheat, Ground -nut, cotton, etc. WORK CARRIED OUT BY CGWB. Systematic Hydrogeological surveys carried out in parts of DEWAS DISTRICT between 1970 & 1988 and reappraisal hydrogeological surveys in 1993-94. World Bank assisted Hydrology Project- I: Eleven shallow and deep piezometers have been drilled by the Central Ground Water Board and 26. piezometers have been drilled by the State Ground Water Department in the DISTRICT , for Water level and quality monitoring.

6 Ground Water exploration program of the Central Ground Water Board , 17 exploratory wells have been drilled in the DISTRICT . Artificial recharge studies have been carried out in Londri flood plain area, Chhoti Kali Sindh watershed, Nagda watershed and DEWAS Bank Note Press areas of the DISTRICT . Roof top rainwater harvesting has been done at Government Hospital, DEWAS , Tribal Hostel, Sonkutch and Primary School, Tappa village. For Promoting roof top rain Water harvesting 1000 filters, each costing Rs. were distributed among the people of DEWAS City. Central sector Scheme: One Demonstrative Project DEWAS Watershed in collaboration with Public Health Engineering Department, DEWAS , Madhya Pradesh Government, is taken up in the year 2006 in The Upper Reaches of Choti Kali Sindh River , under this project Stop Dam 11, Gabion-10, Recharge Shaft 01, Percolation tank 01, Sub-Surface Dyke-01. & Rooftop Rain Water harvesting 02 is being constructed and impact analysis is to be done. Rainfall & Climate: The average annual rainfall of DEWAS DISTRICT is 1083 mm, based on average of 3 stations.

7 Rainfall increases from west to east and is lowest in the southwestern portion. About 90 % of the rainfall takes place from June to September, only 5 - 8% takes place in the winter months and only about 2%. in summer. It is only during the monsoon that surplus Water for deep percolation is available in the DISTRICT . The normal rainfall follows a normal distribution during the year. The climate of DEWAS DISTRICT is semi- tropical, characterised by hot summer and well distributed rainfall during the south west monsoon season. January is the coldest month with the temperature falling as low as 2o - 3oC. The period from March to first week of June is the summer season. May is the hottest month when the temperature may go upto 45oC. Geomorphology & Soil Types : The DISTRICT can be divided into four broad physiographic divisions (1) DEWAS plateau (2) Kali Sindh Basin (3) Vindhyan Range (4) Middle Narmada valley. The DEWAS plateau extends over the north-western part of Sonkatch block and western part of DEWAS block.

8 This division is a part of the Malwa plateau with higher elevation in the north and plain land topography in the south. Chhoti Kali Sind and Kshipra rivers drain this region. DEWAS town is situated on this plateau. The maximum elevation is 700 m amsl, north of DEWAS town. A conical hill housing the shrine of Goddess Chamunda is located in DEWAS town. The Kali Sindh Basin is situated in the northeastern part of the DISTRICT in a north-south column covering Tonk Khurd and part of Sonkautch blocks. The Kali Sindh river flowing in the centre forms its drainage system. This is the most fertile tract of the DISTRICT . The Vindhyan Hill Range passes through the middle of the DISTRICT in an east-west direction forming a narrow strip. Kshipra and Kali Sindh rivers originate from north of this range, while the tributaries of the Narmada originate from south of it. The maximum elevation is 758 m amsl at Bhainsore and minimum is 456 m amsl near village Palasi, both in Bagli Block. Middle Narmada valley division falls in the Malwa plateau and covers the southeastern part of the DISTRICT .

9 It covers the Khategaon, Kannod and southern part of Bagli blocks. The Narmada river flowing east-west forms the southern boundary of this division, as well as, of the DISTRICT . The division is covered by extensive forests. It is a low lying area with a maximum elevation of 405 m amsl near village Serali in Kannod block and minimum 200 m amsl near village Kotmir in Bagli Block. Ground Water Scenario : Hydrogeology - Aquifer System and Aquifer Parameters Archaean These rocks are basically hard and compact with no primary porosity. Ground Water occurs in these in the secondary porosity created by weathering, jointing and fracturing. The intensity and depth of weathering and the frequency of joints and fractures control the Ground Water potential. These formations form poor to moderate aquifers. The depth of weathered mantle varies from a thin film to about 15m in topographic lows. The joints and fractures close down below 25 to 30 m. Ground Water occur under Water table conditions. These rocks mostly support dug wells with a few tube wells at some places.

10 The tube wells yield 1-2 lps for considerable draw downs. The dug wells range in depths between 5 - 15 m and 2- 8 m in diameter. Open wells yield about 8 lps on an average for about 2 - 3 hours of pumping. Bijawar: These rocks are impervious and devoid of joints and fractures. The weathering in these rocks is limited to the upper surface only between 10 to 25 m. Ground Water occurs in the weathered portions under Water table conditions with limited potential. Dug wells are generally constructed with depths between 8 - 16 m and diameters of the order of 3 - 8 m. The open wells yield about 1 lps or less. Vindhyan:The Vindhyan sandstones have primary porosity, but this depends on the degree of compaction. It could vary from impervious to as high as 30%. Hence again Ground Water availability is controlled by secondary porosity generated by weathering, jointing and fracturing. Lineaments and their intersections are holders of Ground Water , which occurs under Water table conditions. The open wells may yield about 1lps or less.

Manual on Artificial Recharge of Groundwater 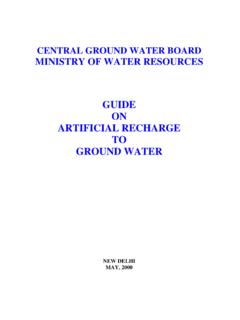 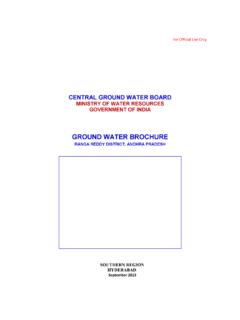 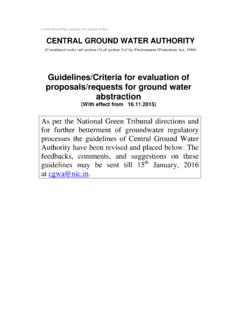 Guidelines/Criteria for evaluation of …

The prime objective of the guidelines for evaluation of proposals/requests for the withdrawal of ground water, is to focus on a specific part of ground water 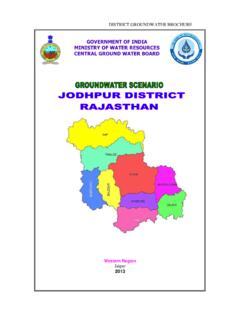 GOVERNMENT OF INDIA MINISTRY OF WATER … 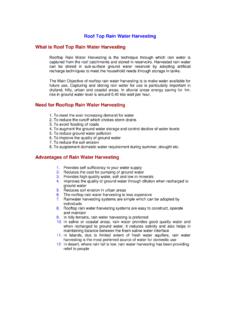 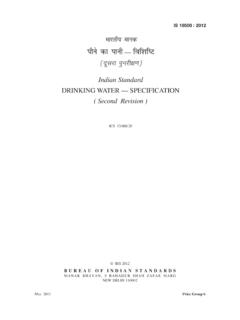 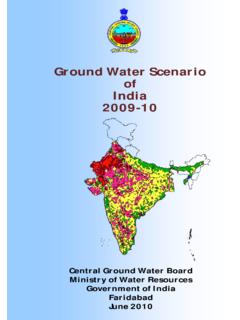 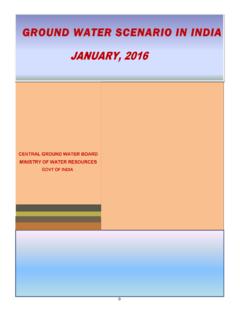 Out of 36 meteorological subdivisions, the rainfall has been excess over 1, normal over 23, deficient over 12 sub-divisions and no sub-division under scanty rainfall.

4 . Groundwater and Wells . Minnesota’s drinking water comes either from surface water (lakes, streams, or rivers) or from groundwater. Surface water is more vulnerable to contamination and requires extensive testing 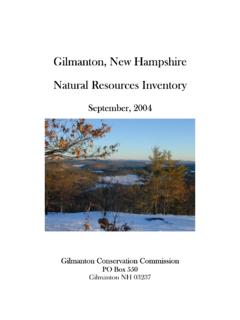 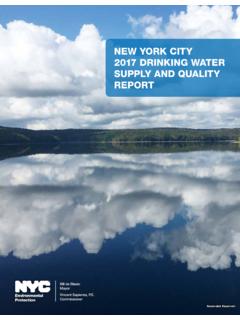