Chapter 11 Dimensionality ReductionThere are many sources of data that can be viewed as a large matrix. Wesaw in Chapter 5 how the Web can be represented as a transition matrix. InChapter 9, the utility matrix was a point of focus. And in Chapter 10 weexamined matrices that represent social networks. In many of these matrixapplications, the matrix can be summarized by finding narrower matricesthat in some sense are close to the original. These narrow matrices have only asmall number of rows or a small number of columns, and therefore can be usedmuch more efficiently than can the original large matrix. The processof findingthese narrow matrices is calleddimensionality saw a preliminary example of Dimensionality Reduction in Section , we discussed UV- decomposition of a matrix and gave a simple algorithmfor finding this decomposition .

1 Chapter 11 Dimensionality ReductionThere are many sources of data that can be viewed as a large matrix. Wesaw in Chapter 5 how the Web can be represented as a transition matrix. InChapter 9, the utility matrix was a point of focus. And in Chapter 10 weexamined matrices that represent social networks. In many of these matrixapplications, the matrix can be summarized by finding narrower matricesthat in some sense are close to the original. These narrow matrices have only asmall number of rows or a small number of columns, and therefore can be usedmuch more efficiently than can the original large matrix. The processof findingthese narrow matrices is calleddimensionality saw a preliminary example of Dimensionality Reduction in Section , we discussed UV- decomposition of a matrix and gave a simple algorithmfor finding this decomposition .

2 Recall that a large matrixMwas decomposedinto two matricesUandVwhose productU Vwas approximatelyM. ThematrixUhad a small number of columns whereasVhad a small number of rows,so each was significantly smaller thanM, and yet together they representedmost of the information inMthat was useful in predicting ratings of items this chapter we shall explore the idea of Dimensionality Reduction inmore detail. We begin with a discussion of eigenvalues and their use in prin-cipal component analysis (PCA). We cover singular - value decomposition , amore powerful version of UV- decomposition . Finally, because we are alwaysinterested in the largest data sizes we can handle, we look at another formof decomposition , called CUR- decomposition , which is a variant of singular - value decomposition that keeps the matrices of the decomposition sparse if theoriginal matrix is 11.

3 Dimensionality Eigenvalues and Eigenvectors of Symmet-ric MatricesWe shall assume that you are familiar with the basics of matrix algebra: multi-plication, transpose, determinants, and solving linear equations for example. Inthis section, we shall define eigenvalues and eigenvectors of a symmetric matrixand show how to find them. Recall a matrix is symmetric if the element inrowiand columnjequals the element in rowjand DefinitionsLetMbe a square matrix. Let be a constant andea nonzero column vectorwith the same number of rows asM. Then is aneigenvalueofMandeisthe correspondingeigenvectorofMifMe= an eigenvector ofMandcis any constant, then it is also true thatceis an eigenvector ofMwith the same eigenvalue. Multiplying a vector by aconstant changes the length of a vector, but not its direction.

4 Thus, to avoidambiguity regarding the length, we shall require that every eigenvector be aunit vector, meaning that the sum of the squares of the components of thevector is 1. Even that is not quite enough to make the eigenvector unique,since we may still multiply by 1 without changing the sum of squares of thecomponents. Thus, we shall normally require that the first nonzero componentof an eigenvector be :LetMbe the matrix 3 22 6 One of the eigenvectors ofMis 1/ 52/ 5 and its corresponding eigenvalue is 7. The equation 3 22 6 1/ 52/ 5 = 7 1/ 52/ 5 demonstrates the truth of this claim. Note that both sides are equal to 7/ 514/ 5 Also observe that the eigenvector is a unit vector, because (1/ 5)2+(2/ 5)2=1/5 + 4/5 = 1. EIGENVALUES AND EIGENVECTORS OF SYMMETRIC Computing Eigenvalues and EigenvectorsWe have already seen one approach to finding aneigenpair(an eigenvalue andits corresponding eigenvector) for a suitable matrixMin Section.

6 There will always beneigenpairs, although insome cases, some of the eigenvalues will be identical. The method starts byrestating the equation that defines eigenpairs,Me= eas (M I)e=0, then nidentity matrixwith 1 s along the main diagonal and 0 a vector of all 0 fact of linear algebra is that in order for (M I)e=0to hold for avectore6=0, the determinant ofM Imust be 0. Notice that (M I)looks almost like the matrixM, but ifMhascin one of its diagonal elements,then (M I) hasc there. While the determinant of ann nmatrix hasn! terms, it can be computed in various ways inO(n3) time; an example is themethod of pivotal condensation. The determinant of (M I) is annth-degree polynomial in , from whichwe can get thenvalues of that are the eigenvalues ofM. For any such value ,sayc, we can then solve the equationMe=ce.

7 There arenequations innunknowns (thencomponents ofe), but since there is no constant term in anyequation, we can only solve foreto within a constant factor. However, usingany solution, we can normalize it so the sum of the squares of the componentsis 1, thus obtaining the eigenvector that corresponds to :Let us find the eigenpairs for the 2 2 matrixMfrom Ex-ample RecallM= 3 22 6 1 RecallMidenotes multiplying by the matrixM itimes, as discussed in Section that a stochastic matrix is not generally symmetric. Symmetric matrices andstochastic matrices are two classes of matrices for which eigenpairs exist and can be this chapter, we focus on techniques for symmetric 11. Dimensionality REDUCTIONThenM Iis 3 22 6 The determinant of this matrix is (3 )(6 ) 4, which we must set to equation in to solve is thus 2 9 + 14 = 0.

8 The roots of this equationare = 7 and = 2; the first is the principal eigenvalue, since it is the the vector of unknowns xy We must solve 3 22 6 xy = 7 xy When we multiply the matrix and vector we get two equations3x+2y = 7x2x+6y = 7yNotice that both of these equations really say the same thing:y= 2x. Thus, apossible eigenvector is 12 But that vector is not a unit vector, since the sum of the squares of its compo-nents is 5, not 1. Thus to get the unit vector in the same direction, we divideeach component by 5. That is, the principal eigenvector is 1/ 52/ 5 and its eigenvalue is 7. Note that this was the eigenpair we explored in Exam-ple the second eigenpair, we repeat the above with eigenvalue 2 in place of7. The equation involving the components ofeisx= 2y, and the secondeigenvector is 2/ 5 1/ 5 Its corresponding eigenvalue is 2, of course.

10 Start with anynonzero vectorx0and then iterate:xk+1:=MxkkMxkkwherekNkfor a matrix or vectorNdenotes theFrobenius norm; that is, thesquare root of the sum of the squares of the elements ofN. We multiply thecurrent vectorxkby the matrixMuntil convergence ( ,kxk xk+1kis lessthan some small, chosen constant). Letxbexkfor that value ofkat whichconvergence is obtained. Thenxis (approximately) the principal eigenvectorofM. To obtain the corresponding eigenvalue we simply compute 1=xTMx,which is the equationMx= xsolved for , sincexis a unit :Take the matrix from Example :M= 3 22 6 and let us start withx0a vector with 1 for both components. To computex1,we multiplyMx0to get 3 22 6 11 = 58 The Frobenius norm of the result is 52+ 82= 89 = We obtainx1bydividing 5 and 8 by ; that is:x1= For the next iteration, we compute 3 22 6 = The Frobenius norm of the result is , so we divide to obtainx2= We are converging toward a normal vector whose second component is twice thefirst. 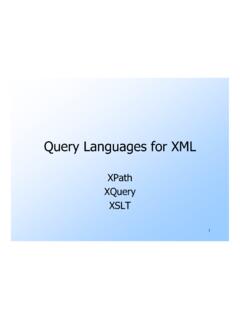 Query Languages for XML XPath XQuery XSLT. 2 The XPath/XQueryData Model Corresponding to the fundamental “relation” of the relational model is: sequence of items. An item is either: 1. A primitive value, e.g., integer or string. 2. A node (defined next). 3 Principal Kinds of Nodes 1. Document nodes represent entire 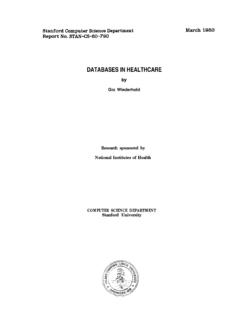 DATABASES IN HEALTHCARE bY Gio Wiederhold Research sponsored by National Institutes of Health ... clinical trials, clinical research, ambulatory care, and hospitals) are appended. There is an extended bibliography.. ... file systems will simply disallow such access, in other systems such usage ... 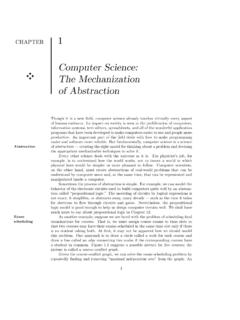 Computer Science: The Mechanization of Abstraction 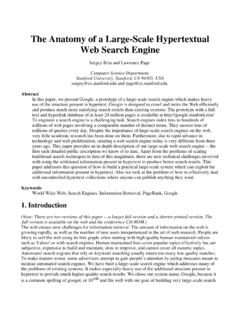 The Anatomy of a Search Engine - Stanford University

Anatomy, The anatomy of a 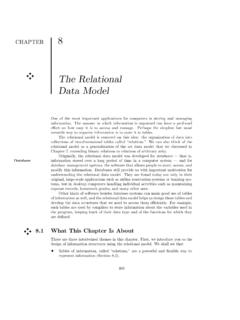 404 THE RELATIONAL DATA MODEL An important part of the design process is selecting “attributes,” or properties of the described objects, that can be kept together in a table, without introduc- 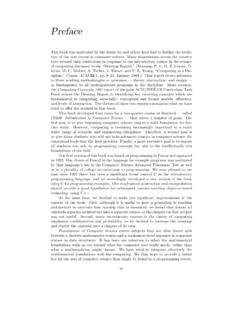 PREFACE xi 4. Lists: all of Chapter 6. Some may wish to cover lists before trees, which is a more traditional treatment. We regard trees as the more fundamental 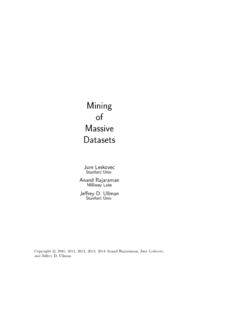 Preface This book evolved from material developed over several years by Anand Raja-raman and Jeﬀ Ullman for a one-quarter course at Stanford. 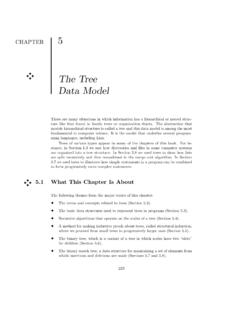 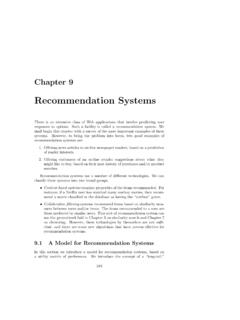 Chapter 9 Recommendation Systems There is an extensive class of Web applications that involve predicting user responses to options. Such a facility is called a recommendation system. We shall begin this chapter with a survey of the most important examples of these systems. However, to bring the problem into focus, two good examples of 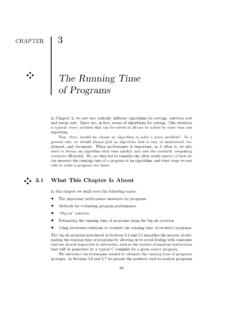 SEC. 3.3 MEASURING RUNNING TIME 91 amounts of data tend to be more complex to write and understand than are the relatively ineﬃcient algorithms. The understandability, or simplicity, of an algorithm is somewhat subjective.

4 Singular Value Decomposition (SVD) The singular value decomposition of a matrix A is the factorization of A into the product of three matrices A = UDVT where the columns of U and V are orthonormal and the matrix D is diagonal with positive real entries. The SVD is useful in many tasks. Here we mention two examples. 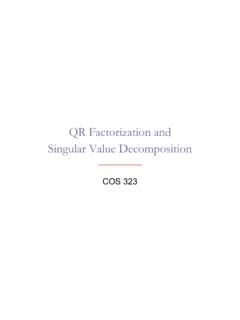 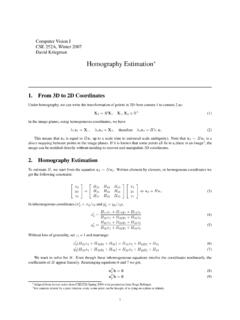 solve it using Singular Value Decomposition (SVD). Starting with equation 13 from the previous section, we rst compute the SVD of A: A = U V> = X9 i=1 ˙iu iv > (17) When performed in Matlab, the singular values ˙i will be sorted in descending order, so ˙9 will be the smallest. There are three cases for the value of ˙9: matrix is to utilize the singular value decomposition of S = A0A where A is a matrix consisting of the eigenvectors of S and is a diagonal matrix whose diagonal elements are the eigenvalues corresponding to each eigenvector. Creating a reduced dimensionality projection of X is accomplished by selecting the q largest eigenvalues in and retaining ...