The first Wi- Fi technology to be deployed circa 1997 was 802.11b, which operates in the 2.4 GHz ISM band and is based on spread -spectrum techniques.

2 10 Benefits of 11ax in 5 GHz .. 10 Benefits of 11ax in GHz .. 10 GHz remains important .. 11 5. for IoT Devices .. 12 6. Conclusion .. 13 Dual-Band 11AX Quantenna Communications, Inc. 3 1. A Brief History of Wi-Fi Wi-Fi has become a ubiquitous technology in today s world, providing connectivity for billions of devices. While it s generally just referred to as Wi-Fi , the term really encompasses a number of different technologies and frequency bands. In spite of this, the industry has been quite successful in merging all of these different technologies into a single Wi-Fi experience for end-users. The first Wi-Fi technology to be deployed circa 1997 was , which operates in the GHz ISM band and is based on spread-spectrum techniques. It was followed in 1999 by , which operates exclusively in the 5 GHz band and uses OFDM modulation instead.

3 Later, around 2003, the technology that underlies was adapted to operate in the GHz band as well, which gave rise to , published in 2009, was a major revamp of Wi-Fi, introducing new concepts like MIMO and several advanced features that are built on MIMO (such as beamforming, spatial multiplexing, ..). also was the first Wi-Fi technology to be defined for both the GHz and the 5 GHz band. However, widespread adoption of the more advanced features of 11n did not happen until the introduction of the next-generation Wi-Fi, was published in 2013. It pushed features like beamforming and MU-MIMO into the mainstream, but it is only defined for the 5 GHz band. This means that since publication of in 2009, no single technology exists that covers both Wi-Fi bands and that has good support for advanced features to serve the demands of today s Wi-Fi.

4 Partly in response to this, was started in May 2014. It is currently scheduled to become officially ratified as a standard by late 2019. In the interim, a well-developed draft of the standard is available for initial implementations and first-generation products are emerging. In this paper, we ll discuss 11ax and how to make optimal use of the Dual-Band support and the set of features that it brings to the table. We ll argue that a home network is best served by simultaneous operation of 11ax in both the GHz and 5 GHz bands, combined with a judicious partitioning of the devices between those bands. Different 11ax features can then further be used to address the conditions or services encountered in each of the bands. In addition, 11ax should also be considered as a technology for IoT devices, such that all or most in-home communications can be harmonized using a single underlying technology.

5 Dual-Band 11AX Quantenna Communications, Inc. 4 2. A Quick Look at 11ax Features In this section, we ll provide a brief overview of the key features of 11ax. 11ax inherits all the advanced MIMO features of 11ac and adds many new features that are targeted at dense-deployment scenarios. The flagship features of 11ax are: New OFDM Symbol Duration Downlink OFDMA Uplink OFDMA Downlink MU-MIMO Uplink MU-MIMO Spatial Reuse Extended Range Operation Target Wake Time Modulation improvements (1024 QAM) 20 MHz -only operation These features are described briefly below. New OFDM Symbol duration Like 11a, 11g, 11n and 11ac, 11ax uses OFDM modulation. With OFDM, data is transmitted in symbols using a large number of frequency subcarriers. Prior to 11ax, the symbol duration was 4 microseconds. The duration for 11ax symbols was chosen to be four times longer.

6 This choice makes 11ax more robust in highly dispersive channels with lower overhead than these older technologies. Downlink OFDMA (DL-OFDMA) In DL-OFDMA, the AP sends data to several users simultaneously, by assigning different parts of the spectrum to different users. This does not increase the total resources of the channel, but it enables the sharing of the transmission overhead (such as preamble, inter-frame silent periods, ..) over several users, rather than having to duplicate them for every user. This reduction in overhead translates in improved throughput. As this overhead can be significant for short data transmissions, one possible application of DL-OFDMA is aggregating many low-rate data streams. Uplink OFDMA (UL-OFDMA) UL-OFDMA uses the same principles as DL-OFDMA (assigning different users to different parts of the spectrum), but in this case the data originates from different client devices, all of which are then simultaneously received at the AP.

7 The AP will control the timing of the UL transmissions by sending targeted clients a Trigger frame to invite them to transmit uplink data. Dual-Band 11AX Quantenna Communications, Inc. 5 Downlink MU-MIMO (DL-MU-MIMO) MU-MIMO uses the spatial diversity of the channel to send independent stream of data over the same bandwidth. Unlike OFDMA, all users use the full bandwidth, leading to potentially impressive multiplexing gains. In DL-MU-MIMO, the AP sends multiple simultaneous transmissions to a number of clients. The AP pre-codes the transmissions such that the mutual interference between the different streams is cancelled at the respective clients locations. Uplink MU-MIMO (UL-MU-MIMO) UL-MU-MIMO uses the same principles of DL-MU-MIMO, but transmissions originate at different clients and are simultaneously received by the AP.

8 Each transmission uses the full bandwidth but using different independent streams. The AP s receiver is responsible for canceling the interference between the different received data streams. Spatial reuse (SR) Wi-Fi systems operate on a shared medium. In order to avoid packets from colliding, uses a collision avoidance mechanism known as CSMA/CA. This involves transmitters assessing the medium for a specified amount of time to determine whether other transmissions are in progress. If another transmission is detected, the transmitter refrains from transmitting. While this is an effective way to avoid collisions, the method is overly conservative. It does not recognize opportunities where multiple transmitters could be active without affecting the signal at the respective receivers. One instance would be the case where the receivers are well separated in space.

9 Spatial reuse is a collective name for methods that improve on basic CSMA/CA by allowing more simultaneous transmissions. One specific implementation (OBSS-PD) balances transmit power versus detection levels. Extended Range (ER) operation 11ax defines a special Single-User (SU) mode of operation that is designed to be more robust in adverse channel conditions (specifically long distances). This mode does not achieve the same data rates as typical SU transmissions, but it allows communication over larger distances. Target Wake Time (TWT) Many client devices are battery-operated and benefit from power-saving strategies. 11ax further builds on power-saving schemes that were defined previously by introducing TWT. TWT is a highly-customizable way of negotiating the times at which clients will be available for accessing the medium. This means devices don t have to wake up as frequently for instance to monitor beacons sent by the AP.

10 Dual-Band 11AX Quantenna Communications, Inc. 6 Modulation improvements In addition to the modulation sizes that were supported in 11ac, 11ax adds a new 1024 QAM modulation, which increases the number of bits per tone from a maximum of 8 (256 QAM) to a maximum of 10, leading to a potential 25% increase in raw throughput. Note that the ability to successfully use 1024 QAM depends on channel conditions and the channel quality requirements are higher than for other modulation types. 20 MHz only operation In the 5 GHz band, 11ac mandates support of 80 MHz bandwidth for all devices. Unlike 11ac however, 11ax allows a new class of devices that operate in 20 MHz only, to support those applications that don t have a need for the highest throughputs, but that put a premium on simplicity and power saving. 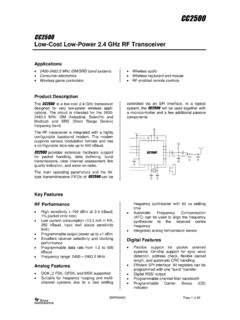 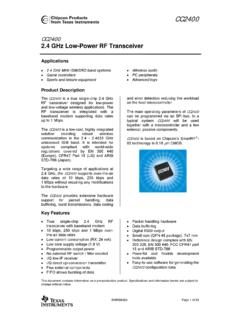 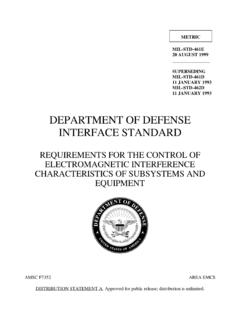 MIL-STD-461E ii FOREWORD 1. This military standard is approved for use by all Departments and Agencies of the Department of Defense. 2. Beneficial comments (recommendations, additions, deletions) and any pertinent data which

www.intertek.com 4 FCC - Overview • FCC – the Regulatory Authority for the USA • Section 302 of the Communications Act of 1934 authorizes the FCC to regulate devices capable of harmful interference. • Telecom Act of 1996 does not affect this authority

What, Intertek, Com 4, What s new in emc

Practical Manufacturing Testing of Bluetooth Wireless Devices 4 Chapter 2 Introduction to to IEEE 802.11 OFDM. IEEE 802.11 is a set of standards defining a wireless communication system in the GHz range. 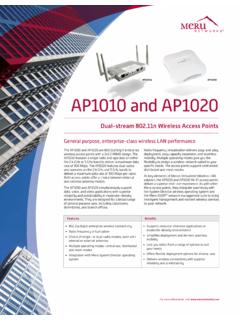 AP1020e For more information, visit www.merunetworks.com The AP1010 and AP1020 are 802.11a/b/g/n enterprise wireless access points with a 2x2:2 MIMO design. The AP1010 features a single radio and operates on either 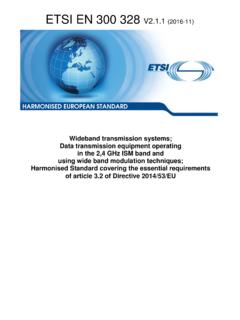