EPDM Membrane Production: Materials and manufacturing Processes Summary This paper will review the raw Materials used in the production of EPDM based compounds used to manufacture single ply membranes for the commercial roofing industry. We will also give a brief overview of the manufacturing process which converts the base compound (still a thermoplastic material) into a durable weather resistant Membrane suitable for decades of reliable service. Part 1, The Raw Materials EPDM compounds are made up of 4 main ingredients; 1) EPDM Polymer, 2) Carbon Black, 3) paraffinic oils as softeners and 4) fillers, activators, crosslinking systems etc. EPDM EPDM is a synthetic elastomer produced as a copolymer of ethylene and propylene, with small amounts of a pendant diene (double bonds) in order to cross link the material.

EPDM Membrane Production: Materials and Manufacturing Processes Summary This paper will review the raw materials used in the production of …

1 EPDM Membrane Production: Materials and manufacturing Processes Summary This paper will review the raw Materials used in the production of EPDM based compounds used to manufacture single ply membranes for the commercial roofing industry. We will also give a brief overview of the manufacturing process which converts the base compound (still a thermoplastic material) into a durable weather resistant Membrane suitable for decades of reliable service. Part 1, The Raw Materials EPDM compounds are made up of 4 main ingredients; 1) EPDM Polymer, 2) Carbon Black, 3) paraffinic oils as softeners and 4) fillers, activators, crosslinking systems etc. EPDM EPDM is a synthetic elastomer produced as a copolymer of ethylene and propylene, with small amounts of a pendant diene (double bonds) in order to cross link the material.

2 The actual abbreviation EPDM conforms to the ASTM nomenclature guidelines as describing an Ethylene Propylene Diene PolyMethylene main chain elastomer. Blocks of Ethylene and Propylene form the backbone of the very long molecule chains of this elastomer (several thousand molecules in each chain). The diene (usually ENB) is introduced to give reactive sites to tie all these chains together chemically, during the vulcanization (curing) step. Because these reactive sites are pendant (not part of the main backbone chain) there are no weak points on the main chain. This is unlike for example Natural Rubber or SBR, where these necessary reactive sites are along the main chain. This means that reactive entities in the atmosphere (for example Ozone, which is very aggressive) can easily attack and degrade these Materials .

3 This also explains why EPDM is on the order of 100 to 1000 times more resistant to ozone than Natural Rubber, even containing antiozonant stabilizers. EPDM is the predominant, and maybe the only elastomer used today for thermoset roofing membranes because of its broad range of performance properties. As mentioned earlier, when correctly formulated, it is extremely resistant to the elements of outdoor exposure, (Sunlight/ UV exposure, Water / Moisture and the Temperature extremes associated with worldwide climates). EPDM is produced in a continuous process, by means of a solution polymerization technique. The majority of product is made using the Ziegler Natta catalysis method, produced usually in the form of 25kg bales, but several producers are now using the alternative and newer metallocene catalysts.

4 These offer the option of also producing in the form of pellets. The current annual global capacity for EPDM is on the order of million tons through 2005. The main applications are in the automotive industry for manufacturing components such as weatherstripping, coolant hose, brake parts and in motor oil as a heat stabilizer. [jaj1]Fig 1 Flow Chart for Production of EPDM by Z-N Solution Process Fig 2 EPDM Raw Polymer Forms (friable bale and pellet) Fillers The main component used to reinforce the polymer is carbon black, which is one of the four forms of the element carbon. The types of carbon are, Diamond, a crystalline face, centered cube, Graphite a crystalline hexagonal platy form, Carbon Black a Microcrystalline/ amorphous type with hexagonal layers but much less ordered than graphite and finally the very recently investigated Nanocarbon structures.

5 The modern way of producing most carbon blacks is the Oil Furnace process (see Fig 2). This process produces the great majority of all blacks today, and was first introduced in 1943, by Phillips. In this process a hot flame is created in a refractory brick lined furnace using natural gas. When the temperature stabilizes at a pre-determined level, feed stock oil, which is highly aromatic, refinery bottoms oil is pre-heated, vaporized, and injected into the heated furnace. Temperature and reaction time determines what kind of black is produced, from N110 to N774. The reaction is terminated by means of a water quench. The black is then dried, palletized, and packaged before it is shipped to the final user. Hydrogen and other combustible gasses are often burned to generate electricity to reduce costs and minimize pollution.

6 The type of black, or grade , from N110 to N774, is determined by the reactor size, temperature, water quench position and additives. The particle size, ranging from 11 to19 nanometers (for N110) to 61 to 100 (for N774) is a factor of residence time in the reactor. Smaller particle size blacks, such as N110 need less time in the reactor before being quenched ( secs.) than N774 at 4 seconds. Smaller particle blacks also take more feed-stock and are therefore more expensive. Fig 2. Furnace Process to produce Carbon Black[jaj2] Carbon blacks reinforce rubber polymers almost solely by means of physical entanglement with the polymer chains. Carbon blacks, being organic, are compatible with organic polymers.

7 But more important is their size scale, that is, they are of a size similar to polymer chains, allowing them to become entangled between polymer chains. The smaller the carbon black particle sizes are closer to the polymer size, and therefore reinforce more than bigger particle size blacks. The structure of blacks also plays a large part in the reinforcement of polymers, as the bigger and more branched a black aggregate gets, the more it is able to get entangled with the polymer chains. In addition to its reinforcing properties, carbon black has one other very important characteristic to impart to the Membrane compound. Carbon black is a very efficient (and cost effective) UV radiation absorber and this gives the final Membrane it s outstanding resistance to long term sunlight/ weathering exposure.

8 Other fillers widely used in EPDM Membrane compounds are inorganic fillers such as China clay (for both cost and flame retardant properties), talc, and other organic Materials such as ground coal. Softeners and Plasticizers The typical plasticizer used for Membrane compounds are paraffinic oils. These have the advantage of being compatible in high amounts with the EPDM polymer (both essentially non polar Materials ). In practice this means that there is no danger of sweating out of the oil during outdoor use, even at temperature extremes ranging from 40degC in Winter up to Summer peak temperatures of +80 degC. Selecting the correct grade of oil is also an important to satisfy the high temperature ageing requirements (28 days at 115 degC) laid down in the ASTM specification covering Membrane Materials .

9 These types of oils are referred to as Brightstocks and are commonly used in the manufacture of EPDM single-ply roofing membranes. They are produced from the highest boiling fraction of crude oil. The processing most widely used to produce brightstock is a combination of (i) atmospheric and vacuum distillations which remove the lower boiling distillate oil fractions, (ii) propane deasphalting which removes asphaltenes, (iii) solvent extraction which reduces and optimizes aromatic content, (iv) hydrotreating which reduces sulfur and, lastly, (v) solvent dewaxing whic removes microcrystalline wax. Fig. Typical High Paraffinic Oil Plasticizer for EPDM Membranes Other Ingredients In order to tie the EPDM chains together we also require additives which will react with the pendant ENB and result in the conversion from a thermoplastic ( softens and melts as temperature increases) to a rigid yet flexible state called a thermoset.

10 This is achieved by heating, in a process called vulcanization ,(or curing), originally discovered by Charles Goodyear in the 19th century and named by him after Vulcan, the Roman God of fire. Sulfur is the key element added to initiate this process, often together with other Materials (accelerators) to speed up the reaction. In addition, other additives can be used for specific purposes. Examples are; chemicals to improve the flame retardancy properties, adhesion or high temperature resistance of the final Membrane . EPDM PolymerBasic Physical Properties Clay Fire Resistance Dimensional Stability Process OilsFlexibilityCarbon BlackTear StrengthUV ResistanceCuring AgentsVulcanizationEPDM EEPPDDMM FFoorrmmuullaattiioonn Part 2, Preparation of the Membrane Base Compound The Mixing Process The next step in the production of an EPDM Membrane is to combine all the raw Materials discussed previously into a homogenous mixture. 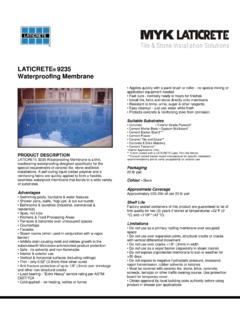 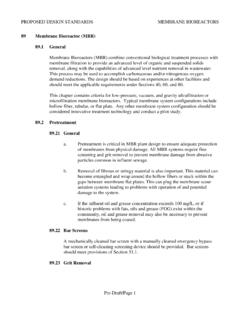 PROPOSED DESIGN STANDARDS MEMBRANE BIOREACTORS Pre-Draft/Page 3 2. Capacity should be provided to treat peak design flows with one unit out of service. 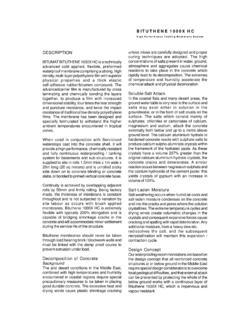 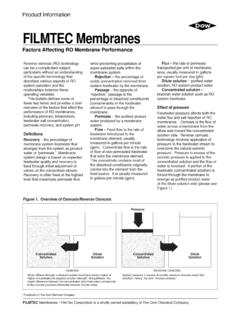 A completed application worksheet is necessary to help select the appropriate probe or probe regulator for your specific application. Customer Contact Information 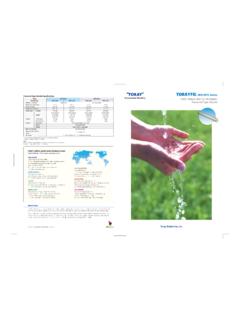 Pressured Type Module Specifications Established in 1926, Toray is a worldwide leader in chemical manufacturing and related products. Leveraging decades of experience in synthetic fibers and