Establishing an emerging technology By …

The Construction Specifier, August 2003. Vol. 56, Green roof Specifications and Standards Establishing an emerging technology By Christopher G. Wark and Wendy W. Wark Reprinted with permission of The Construction Specifications Institute, 99 Canal Center Plaza, Suite 300, Alexandria, VA. 22314, from The Construction Specifier. Earlier this year, the city of Chicago, Illinois, and Green Roofs for Healthy Cities co- hosted the first green roof infrastructure conference and trade show in North America. (At least six green roofs already exist in Chicago, including one covering city hall, and an additional 42 are in the planning stage.) Over 500 architects, landscape architects, roofing contractors, city planners, developers, and others attended the conference to learn and share on the subject, and generate support for green roofs throughout North America. Photo 1. Increased interest in green roofs Several companies are licensees for European green roof systems and methods, where the technology has existed for the past 40 years.

Green roofs have been installed across America in steadily increasing numbers over the past decade, and research is being conducted in North American universities on the

1 The Construction Specifier, August 2003. Vol. 56, Green roof Specifications and Standards Establishing an emerging technology By Christopher G. Wark and Wendy W. Wark Reprinted with permission of The Construction Specifications Institute, 99 Canal Center Plaza, Suite 300, Alexandria, VA. 22314, from The Construction Specifier. Earlier this year, the city of Chicago, Illinois, and Green Roofs for Healthy Cities co- hosted the first green roof infrastructure conference and trade show in North America. (At least six green roofs already exist in Chicago, including one covering city hall, and an additional 42 are in the planning stage.) Over 500 architects, landscape architects, roofing contractors, city planners, developers, and others attended the conference to learn and share on the subject, and generate support for green roofs throughout North America. Photo 1. Increased interest in green roofs Several companies are licensees for European green roof systems and methods, where the technology has existed for the past 40 years.

2 In fact, limited land resources (as compared to North America), expensive sources of energy, and ancient sewer systems overwhelmed by stormwater runoff have all contributed to the success of the green roof industry in Europe. Over 800 green roofs can be found in Germany alone, a leader in building codes and incentives for green roof installation. In Asia, Japan has become a center for green roof technology . Its capital, Tokyo, is the first city to mandate building vegetation must constitute 20 percent of all new construction. Green roofs have been installed across America in steadily increasing numbers over the past decade, and research is being conducted in North American universities on the impact of green roofs on the environment, economy, and energy resources. Some major American corporations, like Ford Motor Co., The Gap, and Heinz Co., have recently installed green roofs, and the approved design for the new World Trade Center includes a rooftop garden.

3 However, despite breakthroughs in green roof elements making them more readily available in the United States, little is known about green roofs and even less about their installation standards. History of green roofs Green (vegetated) roofs have been in existence since ancient times. The first known historical references to manmade gardens above grade were the ziggurats (stone pyramidal stepped towers) of ancient Mesopotamia, built from the fourth millennium until around 600 In France, gardens planted in the 13th Century thrive atop a Benedictine abbey. Norwegians developed sod roofs centuries ago as a means of thermally insulating their buildings. In fact, sod homes are still used as protection against extremely cold winters in Norway and the United States. Five roof gardens were installed atop the seventh floor of the Rockefeller Center in New York City, New York, between 1933 and 1936. Designed to be viewscapes' for the enjoyment of skyscraper tenants (at higher rents, of course), these gardens continue enhancing the view in New York Description of systems The green roof industry has developed two general classifications for rooftop vegetation systems: Figure 1.

4 Extensive Also known as low-profile or performance, this type of green roof contains only one or two plant species and minimal planting medium. It is commonly designed for maximum thermal and hydrological performance and minimum weight load while being aesthetically pleasing. Typically, only maintenance personnel have access to this type of roof . It is installed on flat and pitched roofs (Photo 1), like the Norwegian sod. Commercially available systems use planting media ranging in depth from 41 mm ( in.) to 102 mm (4 in.), and total wet roof loads range from less than 49 kg/m2 (10 lb/sf) to approximately 98 kg/m2 (20 lb/sf). Deeper, extensive systems exist but are becoming less common. The basic components of an extensive system are shown in Figure 1. Figure 2. Intensive Also known as high-profile or rooftop garden, this type of green roof typically contains a variety of plant types and is designed as a park-like setting (Photo 2).

5 Some rooftop gardens support fairly large trees and water features requiring substantial structural reinforcement. A good example is Central Park atop the parking garage at the Kaiser Center in downtown Oakland, California (Photo 3). It has public access and has been a popular place for lunch since it was built in 1961. The minimum planting medium depth for an intensive green roof is usually greater than that of an extensive system, with the maximum depth dictated by the application design. The design also dictates the structural requirements for the roof , especially if the roof is to have public access. The basic components of an intensive system are shown in Figure 2. Throughout the rest of this article, the term green roof ' will be used for extensive systems, and rooftop garden' for intensive systems. Other terminology used to describe a system includes: Roofscape This describes the landscape of the rooftop or the overall appearance of the roof .

6 Modular system In this system, the vegetation and planting medium are contained in special trays covering all or most of the green roof . In a non-modular system, the planting medium is a continuous layer over the entire green roof . The rooftop garden below is a modular system. Photo 2. Eco- roof Another name for a green roof , this term is often used because many green roof designs involve plants that are not green for the entire year, particularly in northern regions. Description of components The components used in green roofs are generally the same as those in rooftop gardens, differing only in depth and project-specific design application (Figures 1 and 2), and include the following: Vegetation Almost any plant can be put on a roof . The only limitations are climate, structural design and maintenance budgets, and the roofscape designer's imagination. Since green roofs are typically lightweight, they often contain ground cover that can thrive in very shallow soils with little to no maintenance.

7 Sedum, a succulent ground cover, has become very popular for use on green roofs in North America. Also commonly used are a variety of hearty wildflowers and shallow-rooting grasses. At times, rooftop vegetation may go dormant and lose foliage, as do plants on grade. Planting medium Not to be confused with soil, the planting medium is distinguished by its mineral content, which is synthetically produced, expanded clay. The clay is considerably less dense and more absorbent than natural minerals, providing the basis for an ultra-lightweight planting medium. Perlite is a common form of expanded clay and is found in garden nursery planting mix (not planting soil). The types of expanded clays used in green roofs are also used in hydroponics. A large number of planting medium recipes,' many of them proprietary, are commercially available. The bulk densities of these mixes range from 400 kg/m3 (25. lb/cf) to 900 kg/m3 (56 lb/cf) for dry mixes where water absorbencies can be 20 200.

8 Percent by weight. Soil is also commonly used in high-maintenance rooftop gardens. Filter layer Somewhere between the planting media and drain layer lies a filter, which not only allows water to flow through while retaining the planting medium, but serves as a root barrier. The filter usually comprises one or two layers of non-woven geotextile, where one of the layers may be treated with a root inhibitor ( copper or a mild herbicide). As in many landscaping applications, filter fabric can also be used to control erosion at the surface of the planting medium. Containment In modular systems, containment refers to actual plant containers. In non-modular systems, the planting medium is supported by the drain layer and contained at the perimeter by a metal or plastic barrier, or the roof parapet. Drain layer Between the planting medium and roof membrane is a layer through which water can flow from anywhere on the green roof to the building's drainage system.

9 Some systems simply use a layer of large-diameter expanded clay, but most green roof companies now use a corrugated plastic drain mat with a structural pattern resembling an egg carton or landscape paver. The minimum drain layer thickness is usually less than 20 mm ( in), but a thicker mat can provide additional insulation and root restriction. Protective layer The roof 's membrane needs protection, primarily from damage during green roof installation, but also from fertilizers and possible root penetrations. The protective layer can be a slab of lightweight concrete, sheet of rigid insulation, thick plastic sheet, copper foil, or a combination of these, depending on the particular design and green roof application. Some green roof systems do not necessarily require a protective layer. Insulation The thermal protection provided by the vegetation, planting medium, and drain layer sufficiently eliminates the need for additional insulation in warm, dry climates.

10 However, building codes usually require a certain level of added insulation, regardless of the overall roof design. Waterproofing A green roof can be installed with any kind of waterproofing system, but single-ply membranes have become very popular in recent years and are specified by nearly all green roof companies for their cost effectiveness and simplicity. As such, the waterproofing layer is typically assumed to be a membrane. Irrigation Watering systems used in landscaping can be adapted to rooftop applications, but several commercial green roof designs combine passive irrigation methods with active components. Passive irrigation describes the process of storing rainwater in the drain layer, which eventually wicks back up through the planting medium while excess is allowed to drain off. One type of water storage medium is a polypropylene fiber mat directly below the planting medium which acts as a sponge. 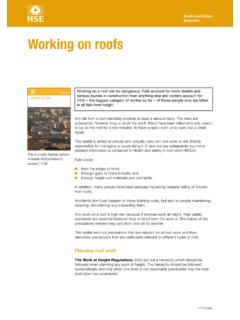 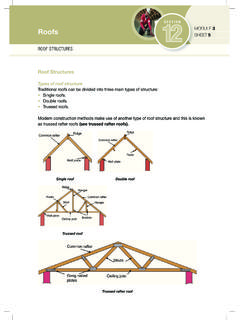 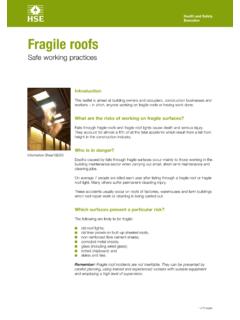 Health and Safety Executive 1 of 5 pages Introduction This leaflet is aimed at building owners and occupiers, construction businesses and workers – in short, anyone working on fragile roofs or having work done. 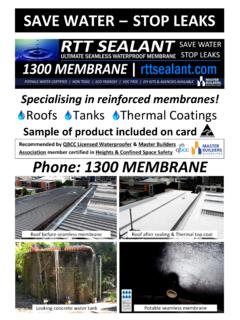 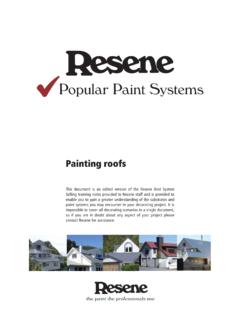 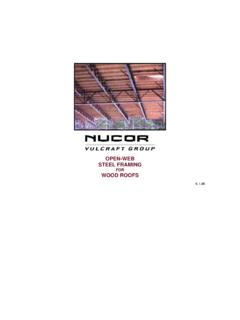 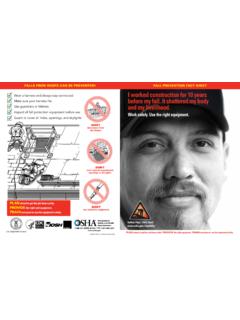 FallS FROm ROOFS CaN bE PREVENTED! Fall …

DON’T I worked construction for 10 years before my fall. It shattered my body and my livelihood. Work safely. Use the right equipment. Safety Pays.