experiment #1 Melting pointDefinitionWhen a solid substance is heated, typically it will melt; that is to say, at sometemperature the solid will begin to liquify and by some slightly higher temperature all of thesolid will have become liquid. The Melting point (actually Melting point range) of acompound is then defined as the temperature at which an observer can first see liquidforming from the solid to the temperature where the last particle of solid has become example, the Melting point of pure sucrose (table sugar) is 185o-186oC. This means thatas a small sample of sucrose is slowly heated some of the crystals begin to liquefy at 185oand all of the crystals have become liquid by 186oC. Sometimes only the second number(completely melted) is reported as the Melting point . In general, this is not a good idea andshould be are several purposes for doing this experiment . The first is to learn how todetermine the Melting range of a solid substance accurately.

point capillary is a thin-walled glass tube, about 100 mm in length and not more than 2 mm in outside diameter, sealed at one end. ... try dropping the capillary onto a hard surface (closed end down) through a 4 foot section of glass tubing. It is surprising how well this works. The sample should be well

1 experiment #1 Melting pointDefinitionWhen a solid substance is heated, typically it will melt; that is to say, at sometemperature the solid will begin to liquify and by some slightly higher temperature all of thesolid will have become liquid. The Melting point (actually Melting point range) of acompound is then defined as the temperature at which an observer can first see liquidforming from the solid to the temperature where the last particle of solid has become example, the Melting point of pure sucrose (table sugar) is 185o-186oC. This means thatas a small sample of sucrose is slowly heated some of the crystals begin to liquefy at 185oand all of the crystals have become liquid by 186oC. Sometimes only the second number(completely melted) is reported as the Melting point . In general, this is not a good idea andshould be are several purposes for doing this experiment . The first is to learn how todetermine the Melting range of a solid substance accurately.

3 Millions of solidorganic compounds, and their Melting points , are known. Perhaps 10,000 of these will havethe same Melting point as your unknown compound. You don t know what the compoundis yet, but you have narrowed the field. In this experiment you will attempt to determinethe identity of a compound, from among ten contenders, based on its Melting of Melting points Practical AspectsFirst, the term Melting point is a misnomer; what we really mean is meltingrange, the temperature from which you first observe liquid in the sample to thetemperature at which all of the solid has just melted. Whenever now and in thefuture you are asked to take a " Melting point ", you must determine and recordthe Melting range. [Remember the two reasons for determining Melting point arecompound identification and estimation of purity. If you do not report the range, youhave provided no information about the latter and the former is compromised since themelting point of an impure substance is usually different from the pure substance.]

4 ] Melting points are usually determined by placing one or two milligrams of the material tobe tested into a Melting point capillary, and heating the capillary and a thermometertogether, and observing over what temperature range the material melts. The meltingpoint capillary is a thin-walled glass tube, about 100 mm in length and not more than 2mm in outside diameter, sealed at one #1 Melting PointPage 2 Figure 1 - Melting point Using ThieleTubeFilling the Capillary TubeMake sure the sample is dry. [This is not an issue in this experiment , but in thefuture you will want to determine the Melting point of a solid you have just separatedfrom a liquid by filtration. If you try to do this while the solid is damp it is impure andthe Melting point will reflect this.] Place a small spatula tip full of the sample on a watchglass and pulverize it with the spatula until it is a powder. Form the powder into amound and push the open end of the capillary into the mound several times to forcesome of the powder into it.

5 You want between 1 and 2 millimeters of sample,lengthwise, in the capillary. Holding the Melting point tube between your thumb andforefinger, strike the closed end against the benchtop perpendicularly until the material isfirmly packed against that end of the tube. Repeat this process if you do not haveenough sample (1-2 mm) in the tube. If it is difficult for you to force the sample from theopen end to the closed end, try dropping the capillary onto a hard surface (closed enddown) through a 4 foot section of glasstubing. It is surprising how well thisworks. The sample should be wellpacked or it will not melt your (dry) thermometer intoone of the small rubber bands you willfind on the side bench. Push the rubberband up the thermometer so it will beable to hold the capillary, near its openend, to the thermometer with the closedend next to the thermometer bulb (seeFig. 1). Pinch the rubber band and slidethe top of the Melting point tube under it; then adjust the position of the you need to insert the bulbend of the thermometer, along with theattached capillary tube, into oil that iscontained in an apparatus known as aThiele tube.

7 Ifyou heat faster your result will be in error because the bulb of the thermometer will notwarm up as quickly as the oil, but your sample will; consequently, the thermometer andsample would be at different temperatures not a good situation. If you have no ideawhat the Melting point of your sample is, you have two choices at this point . (1) Youcould start at room temperature and warm at the recommended rate until the solid melts. This could take more than an hour. (2) You could start at room temperature and warmat about 10 degrees a minute and obtain an approximate Melting point . Then, after theapparatus has cooled below the sample's Melting point , replace the sample (andcapillary) with a new one, and heat slowly until the sample has melted, thus getting anaccurate Melting point . [Sometimes materials decompose as they melt, so you should usea new sample.] Neither of these options may thrill you, but the second is better, unlessyou have happen to have a low Melting of ThermometerActually this section should be called, Finding Defective Thermometers.

8 Fill a beaker with crushed ice to a depth of about 10 cm (4 in). Add just enough coldwater to completely fill the voids between the pieces of ice and barely float the mass ofice off the bottom of the beaker. Immerse the bottom of your thermometer into the ice-water mixture to a depth of 7 or 8 cm. Using the thermometer, stir the ice gently, andobserve the drop in temperature as shown by the thermometer. When the temperaturestops decreasing and has stabilized for 10 or 15 seconds, observe the temperaturedisplayed by the thermometer without removing it from the ice-water bath. Record thistemperature on your report sheet. If the reading is within one Celsius degree of 0o C, thethermometer is a keeper; if the reading differs from 0o C by more than one Celsiusdegree, return the thermometer to your instructor for a replacement. Should you get areplacement, test it at 0o, the thermometer with a paper of Melting points of Biphenyl, Naphthalene, and Biphenyl-NaphthaleneMixturesIf your thermometer is wet, dry it.

9 If there is water on your thermometer the oil inthe Thiele tube will become cloudy because oil and water are not a Thiele tube, determine the Melting points (actually Melting ranges) ofpure biphenyl (Sample #1), pure naphthalene (#8), and the following mixtures ofbiphenyl and naphthalene: 90% biphenyl/10% naphthalene (#2), 60% biphenyl/40%naphthalene (#4), 45% biphenyl/55% naphthalene (#5), and 15% biphenyl/85%naphthalene (#7). The various mixtures have already been prepared for you and can befound in bottles on the side bench near the balances, along with the pure naphthaleneand biphenyl. You will not need more than a small spatula tip full of each sample sinceeach Melting point requires only a couple of milligrams of material. Record your data onExperiment #1 Melting PointPage 4the report sheet. Follow the instructions above for using the Thiele tube. Remember thatyou should not allow the temperature to rise faster than 1 to 2o per minute as a sample ismelting.

10 If you go faster than this the thermal lag of the more massive thermometer willbe greater than that of the capillary and they will not be at the same temperature! Toorapid heating is the most common Melting point mistake made by neophyte chemists. Your setup should look like Figure 4, above, with one exception There should be two (or three) capillary tubes attached to the thermometer, eachcontaining a different sample. This will greatly speed up your work, provided youremember which capillary contains which sample! Rather than trust your memory,you should write this information down. N. B. Do not try to cool down a hot thermometer or Thiele tube using water. Thethermometer will crack and the Thiele tube might. Run samples 4 and 5 first. These materials should not begin Melting below 30o C. We ll skip samples 3 and 6. Then run samples 2 and 7. These materials will not beginmelting below about 50o C. Then run the pure compounds, 1 and 8, together. 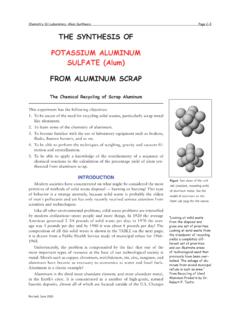 THE SYNTHESIS OF POTASSIUM ALUMINUM …

THE SYNTHESIS OF POTASSIUM ALUMINUM SULFATE (Alum) FROM ALUMINUM SCRAP The Chemical Recycling of Scrap Aluminum This experiment has the following objectives: 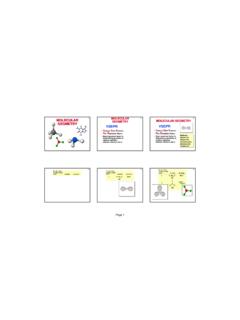 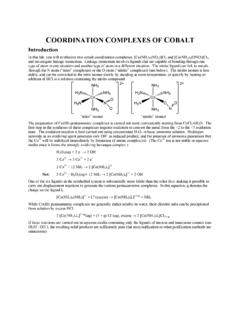 COORDINATION COMPLEXES OF COBALT Introduction In this lab, you will synthesize two cobalt coordination complexes, [Co(NH3)5(NO2)]Cl2 and [Co(NH3)5(ONO)]Cl2, and investigate linkage isomerism. 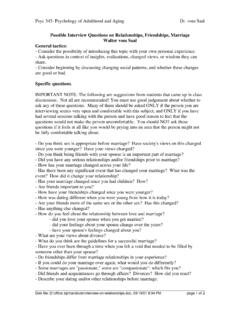 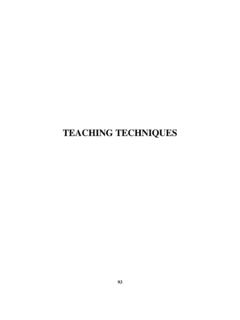 TEACHING TECHNIQUES 2 Progression of Commands - The steps in the development of a unit look something like this... a. Simple actions (“walk”, “jump”) 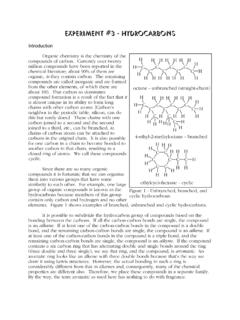 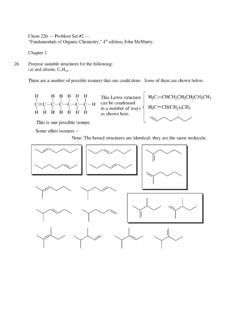 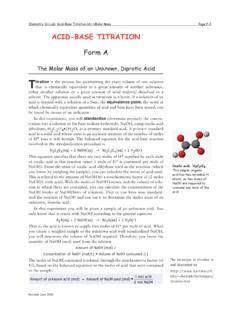 ACID-BASE TITRATION Form A The Molar Mass of an Unknown, Diprotic Acid Titration is the process for ascertaining the exact volume of one solution that is chemically equivalent to a given amount of another substance, 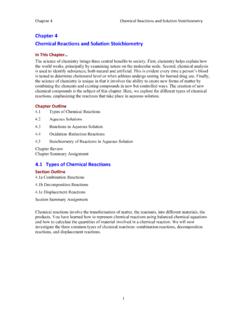 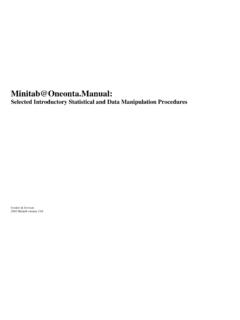 The inclusion of Minitab Statistical Software input and output contained in this manual is done with permission of Minitab, Inc. Screen shots were taken from Minitab version 13.0. For additional documentation, FAQ’s, etc. go to Minitab’s web 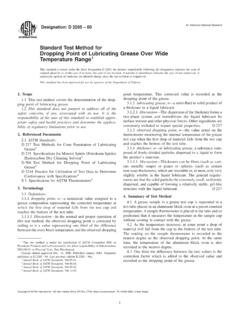 5.1 The dropping point is useful to assist in identifying the grease as to type and for establishing and maintaining bench marks for quality control. The results are to be considered to have only limited signiﬁcance with respect to service perfor-mance because dropping point is a static test. 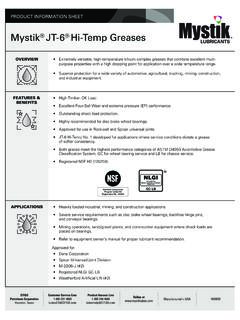 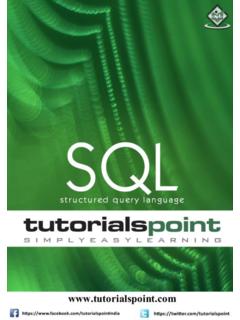 SQL 1 SQL is a language to operate databases; it includes database creation, deletion, fetching rows, modifying rows, etc. SQL is an ANSI (American National Standards Institute) standard language, but there are many different versions of the SQL language.

design situations. The fire resistance (based on the heat transmission end point) of a concrete member or assembly is found by calculating the equivalent thickness for the assembly and then finding the corresponding rating in the charts and tables provided. The equivalent thickness of solid walls and slabs with flat surfaces is the actual ... 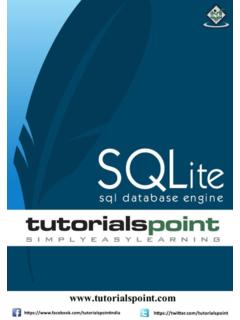 SQLite 2 This chapter helps you understand what is SQLite, how it differs from SQL, why it is needed and the way in which it handles the applications Database.