2 And decision 1 , Seeking to secure progress in a balanced manner, with the understanding that, through this decision, not all aspects of the work of the Ad Hoc Working Group on Long- term Cooperative Action under the Convention are concluded, and that nothing in this decision shall prejudge prospects for, or the content of, a legally binding outcome in the future, Reaffirming the commitment to enable the full, effective and sustained implementation of the Convention through long-term cooperative action, now, up to and beyond 2012, in order to achieve the ultimate objective of the Convention, Recalling the principles, provisions and commitments set forth in the Convention, in particular its Articles 3 and 4, Recognizing that climate change represents an urgent and potentially irreversible threat to human societies and the planet, and thus requires to be urgently addressed by all Parties, Affirming the legitimate needs of developing country Parties for the achievement of sustained economic growth and the eradication of poverty, so as to be able to deal with climate change, Noting resolution 10/4 of the United Nations Human Rights Council on human rights and climate change.

3 Which recognizes that the adverse effects of climate change have a range of direct and indirect implications for the effective enjoyment of human rights and that the effects of climate change will be felt most acutely by those segments of the population that are already vulnerable owing to geography, gender, age, indigenous or minority status, or disability, I. A shared vision for long-term cooperative action 1. Affirms that climate change is one of the greatest challenges of our time and that all Parties share a vision for long-term cooperative action in order to achieve the objective of the Convention under its Article 2, including through the achievement of a global goal, on the basis of equity and in accordance with common but differentiated responsibilities and respective capabilities; this vision is to guide the policies and actions of all Parties, while taking into full consideration the different circumstances of Parties in accordance with the principles and provisions of the Convention.

4 The vision addresses mitigation, adaptation, finance, technology development and transfer, and capacity-building in a balanced, integrated and comprehensive manner to enhance and achieve the full, effective and sustained implementation of the Convention, now, up to and beyond 2012;. 2. FCCC/CP/ 2010 /7 2. Further affirms that: (a) Scaled-up overall mitigation efforts that allow for the achievement of desired stabilization levels are necessary, with developed country Parties showing leadership by undertaking ambitious emission reductions and providing technology, capacity-building and financial resources to developing country Parties, in accordance with the relevant provisions of the Convention;. (b) Adaptation must be addressed with the same priority as mitigation and requires appropriate institutional arrangements to enhance adaptation action and support.

6 3. Recognizes that warming of the climate system is unequivocal and that most of the observed increase in global average temperatures since the mid-twentieth century is very likely due to the observed increase in anthropogenic greenhouse gas concentrations, as assessed by the Intergovernmental Panel on Climate Change in its Fourth Assessment Report;. 4. Further recognizes that deep cuts in global greenhouse gas emissions are required according to science, and as documented in the Fourth Assessment Report of the Inter- governmental Panel on Climate Change, with a view to reducing global greenhouse gas emissions so as to hold the increase in global average temperature below 2 C above pre- industrial levels, and that Parties should take urgent action to meet this long-term goal, consistent with science and on the basis of equity; also recognizes the need to consider, in the context of the first review, as referred to in paragraph 138 below, strengthening the long-term global goal on the basis of the best available scientific knowledge, including in relation to a global average temperature rise of C.

8 7. Recognizes the need to engage a broad range of stakeholders at the global, regional, national and local levels, be they government, including subnational and local government, private business or civil society, including youth and persons with disability, and that 3. FCCC/CP/ 2010 /7 gender equality and the effective participation of women and indigenous peoples are important for effective action on all aspects of climate change;. 8. Emphasizes that Parties should, in all climate change related actions, fully respect human rights;. 9. Confirms that Parties, especially developing country Parties that would have to bear a disproportionate or abnormal burden under the long-term cooperative action under the Convention, should be given full consideration.

9 10. Realizes that addressing climate change requires a paradigm shift towards building a low-carbon society that offers substantial opportunities and ensures continued high growth and sustainable development, based on innovative technologies and more sustainable production and consumption and lifestyles, while ensuring a just transition of the workforce that creates decent work and quality jobs;. II. Enhanced action on adaptation 11. Agrees that adaptation is a challenge faced by all Parties, and that enhanced action and international cooperation on adaptation is urgently required to enable and support the implementation of adaptation actions aimed at reducing vulnerability and building resilience in developing country Parties, taking into account the urgent and immediate needs of those developing countries that are particularly vulnerable.

10 12. Affirms that enhanced action on adaptation should be undertaken in accordance with the Convention, should follow a country-driven, gender-sensitive, participatory and fully transparent approach, taking into consideration vulnerable groups, communities and ecosystems, and should be based on and guided by the best available science and, as appropriate, traditional and indigenous knowledge, with a view to integrating adaptation into relevant social, economic and environmental policies and actions, where appropriate;. 13. Decides to hereby establish the Cancun Adaptation Framework encompassing the provisions laid out below, with the objective of enhancing action on adaptation, including through international cooperation and coherent consideration of matters relating to adaptation under the Convention. 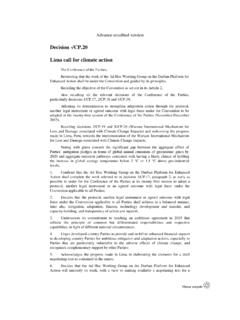 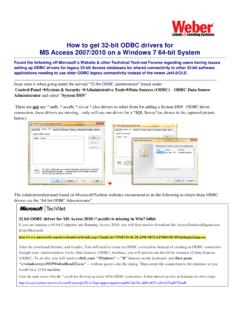 How to get 32-bit ODBC drivers for MS Access …