2 Creates minor barrier to trade between the rest of the world and Europe Sets only minimum requirements To avoid safety concerns being a barrier to trade Conformity Assessment Requirements Not consistent Vary with Category of Equipment Less than earlier directives Does not require compliance with standardsATEX 94/9/EC Categories / EPLs / Zones* When flammable gas is detected inthe body of the mineATEX 94/9/EC Conformity Assessment (Certification ?)ATEX 94/9/EC Notified Bodies A Notified Body is a third party body NOTIFIED to the European Commission by a National Government to perform specific actions in relation to a directive Currently there is no requirement for a Notified Body to have accreditation Different countries set different criteria for the notification process One of the reasons (along with unclear conformity assessment requirements)

3 That Australia, for example, has ceased to accept ATEX as a criteria for import New ATEX Directive explicitly accepts that the current process is weak and sets higher acceptance criteria but still does not insist on accreditationATEX 94/9/EC Harmonisation / Standardisation Essential Health and Safety Requirements (EHSRs) Several pages of generalised requirements Flameproof is the only type of protection mentioned (and only in one sentence) Harmonised Standards Accepted as demonstrating compliance to the EHSRs Prepared by CEN and Cenelecaccording to a mandate from the EU Commission Use of these standards is normal (though voluntary)

4 Standards usually cycle through unharmonised, harmonised and finally unharmonisedin their lifetime Can cause confusion when harmonisation status changes Use of non-harmonised standards can often be justifiedATEX 94/9/EC Standardisation CenelecEN 60000 series standards are generally technically equivalent to IEC 60000 series For EN 60079 series standards, the main difference is the addition of ATEX marking EN 50000 series standards are not directly based on IEC documents and may not have an international equivalent EN 50495 Safety Systems for ATEX Dual certification to IEC 60079 series (for IECEx ) and EN 60079 series (for ATEX) is common practiceATEX 94/9/EC Documentation Manufacturer s Declaration of Conformity (DoC) Made by the manufacturer on SOLE responsibility Backed up by the manufacturer s Technical File For some equipment (Cat.)

5 1/M1 + Cat 2/M2 electrical) backed up by: EC-Type Examination Certificate Relating to the design Quality Assurance Notification Relating to production Alternative of Product Verification Certificate DoC is the only document legally obliged to be suppliedATEX 94/9/EC Declarations of Conformity Theoretically made on the day each individual item of equipment is placed on the market In practice usually pre-printed for serial production leads to errors Change in harmonisation status of standards Initially not harmonised Harmonised Not

7 Will usually issue both sets of documentation together for very little extra costATEX 94/9/EC and IECEx Positives For ATEX Category 3, the IECEx Certificate and ExTRcan be used directly to form the technical file supporting the DoC made under the module Internal Control of Production For equipment not conforming directly to an IEC published standard for a defined Type of Protection, IECEx permits the use of IEC 60079-33 Ex s For equipment not conforming directly to a Cenelecharmonised EN standard, ATEX permits direct assessment against the Essential Health and Safety Requirements IEC 60079-33 will not be published as an EN, although many national standards bodies will publish it.

8 For example as BS IEC 60079-33 The methodology of IEC 60079-33 can support the EHSRs so an IECEx Certificate to IEC 60079-33 can form part of the technical file for ATEXATEX 94/9/EC and IECEx PositivesATEX 94/9/EC Negatives The controls over direct use of the EHSRs are often believed to be weak and allow manufacturers to pay lip service to full conformity The role of the different Conformity Assessment Modules is not always understood and some countries are (possibly justifiably) not happy that ATEX equates to proper certification The level of competence of the various Notified Bodies is widely believed to be extremely variable (although this will be largely addressed in the new directive) The Answer: Both ATEX and IECEx togetherATEX 94/9/EC ATEX 2014/.

9 /EU and then? ATEX 2014/34/EU is a recast of 94/9/EC without major change Results from the New Legislative Framework (NLF) Several directives are being aligned Not appropriate to integrate with IECEx at that time European Commission have followed the developments at UNECE with interest Full time EU official responsible for ATEX has attended more than one of the UNECE conferences There is probably a will within the European Commission to recognise IECEx directly within ATEX But when ? And How ?ATEX 1999/92/EC The other ATEX Directive Minimum requirements for improving the safety and health protection of workers potentially at risk from explosive atmospheres This relates directly to installations and their management rather than the supply of equipment The IEC standards relating to installations are relevant but are not harmonised IEC 60079-10-1 / -2 Hazardous Area Classification IEC 60079-14 Selection and Installation of Equipment IEC 60079-17 Inspection and Maintenance of

10 Equipment IEC 60079-19 Repair and Overhaul of Equipment Requires all installed Equipment to comply with 94/9/ECATEX 1999/92/EC The other ATEX Directive Unlike 94/9/EC, 1999/92/EC is a Safety Directive It sets Minimum Requirements National Governments can implement in different ways and increase the requirements above the minimum in the directive Introduces Other Regional / National Systems The world is divided Administrations where certification alone is the only requirement for market penetration Fairly straight forward Administrations where installation permissioning regimes apply in addition to or as an alternative to certification More complicated IECEx

IEC SCHEME FOR CERTIFICATION TO STANDARDS … 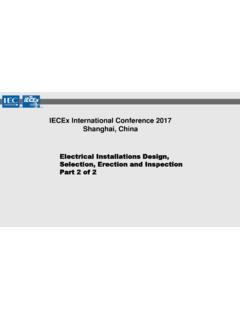 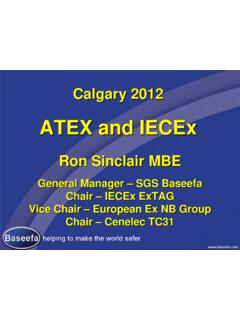 One set to show conformity with a standard and give additional information.\爀屲The ⁜ജepsilon x hexagon mark” was a certification mark under the old approach directives but now just indicates “Ex” protected equipm對ent, irrespective of the conformity assessment regime ... IECEx Certificate … 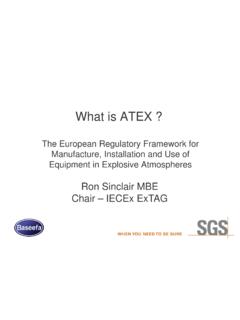 What is ATEX - IECEx

What is ATEX ? The European Regulatory Framework for Manufacture, Installation and Use of ... An ATEX Certificate does NOT confirm conformity ... • Although as IECEx Certificate Numbers grow, IECEx is “taking over” outside EEA Certificates are against the EHSRs and not the standards

What, Certificate, Texas, Conformity, Iecex, Iecex certificate, What is atex

* Types of protection ’c, b en k’ will not being marked on the product, because of possible user mis -interpretation with levels of protection ’c and b’. Manufacturers shall indicate Ex h only and have to define the specific used method(s) in the user installation instructions.

Area classification - An explanation of the importance to ...