India India . Items Regulations in force on 1 January 2012. 1: Notification procedures in the case of individual Firms are required to give workers written notice of dismissal. For retrenchments, the relevant government dismissal of a worker with a regular contract authority must also be notified (art. 25F, Industrial disputes act, 1947). For establishments with 100 or more workmen, the employer must also obtain permission from the relevant government authority before retrenchment can take place. Retrenchment is defined as termination for whatsoever reason, except in the case of disciplinary action (see State Bank of India v.)

India 1 OECD EPL Database, update 2013 INDIA Items Regulations in force on 1 January 2012 1: Notification procedures in the case of individual dismissal of a worker with a regular contract

1 India India . Items Regulations in force on 1 January 2012. 1: Notification procedures in the case of individual Firms are required to give workers written notice of dismissal. For retrenchments, the relevant government dismissal of a worker with a regular contract authority must also be notified (art. 25F, Industrial disputes act, 1947). For establishments with 100 or more workmen, the employer must also obtain permission from the relevant government authority before retrenchment can take place. Retrenchment is defined as termination for whatsoever reason, except in the case of disciplinary action (see State Bank of India v.)

2 N Sundara Money [1976] 3 SCR 160). Calculation (for EPL indicators): based on retrenchment; average of large and small establishments ((2+3)/2. = ). 2: Delay involved before notice can start Written notice of dismissal can be handed to the employee. Courts may require that an employee be given warning prior to dismissal and a fair hearing. Where an employee is dismissed for disciplinary reasons, courts usually examine whether appropriate warning was given prior to dismissal. For large establishments, permission for retrenchment must be received from the relevant government authority. The government authority must decide within 60 days from the date of application by the employer.

3 In case there is no decision in 60 days, it is deemed that permission is granted Calculation (for EPL indicators): based on retrenchment; average of large and small establishments (1 day for written notice + 6 days for warning and hearing+ 60/2 days for permission) = 37 days 3: Length of notice period at different tenure In case of retrenchment: workers with no less than one year's tenure are entitled to one month's notice or durations (a) payment in lieu of notice. Establishments with 100 or more workmen are required to give workers three months' notice or payment in lieu to workers with more than one year's tenure.

4 Calculation (for EPL indicators): based on retrenchment; average of large and small establishments 4: Severance pay at different tenure durations (a) Workers with no less than one year's tenure who are dismissed for retrenchment are entitled to 15 days pay for each completed year of continuous service or any part thereof exceeding six months. Calculation (for EPL indicators): based on retrenchment 5: Definition of unfair dismissal (b) Fair: an employee can be dismissed on the charge of theft, habitual negligence of duty, disorderly behavior, bribery, lack of capability, financial irregularities or subordination. However, in most cases the employee is entitled to warning prior to dismissal and a fair hearing.

5 However, company standing orders regulating dismissal must be approved by government authorities and typically severely restrict dismissal as result of disciplinary action. Retrenchment, defined in a very wide way, is also generally fair provided that procedures has been followed correctly ( State Bank of India v. N Sundara Money [1976] 3 SCR 160; State of Bombay and others v. Hospital Mazdoor Sabha & others [1960] 2 SCR 866). Unfair: dismissal is unfair if provisions for retrenchment or dismissal have not been properly followed, where the employee has not had an adequate opportunity to defend him/herself, during sickness, maternity leave, in retribution for filing a complaint, for taking part in peaceful trade union activities or as a result of discrimination.

6 For economic redundancies, in the absence of any agreement between the employer and dismissed worker, the employer should dismiss the worker who was the last person to be employed in the category. 6: Length of trial period (c ) Employees appointed for a permanent post are usually kept on probation for a period of six months to a year, during which the employee's suitability for the job can be assessed. The law does not stipulate any maximum probation period. Calculation (for EPL indicators): average of typical minimum and maximum length 7: Compensation following unfair dismissal (d) In the event that a dismissal is found to be unfair, the court may reinstate the worker with back pay.

7 In extreme cases where the employer argues strongly against reinstatement, the court may award compensation instead of reinstatement. Labour courts typically take 3-4 years to settle disputes and make an award. The law stipulates that in case of illegal dismissal the workman dismissed is entitled to all the benefits under any law as if he/she had not been laid-off. 8: Reinstatement option for the employee following In most cases of unfair dismissal, the court orders reinstatement. unfair dismissal (b). 9: Maximum time period after dismissal up to The application to the Labour court or Tribunal shall be made before the expiry of 3 years from the date of which an unfair dismissal claim can be made (e) discharge, dismissal, retrenchment or otherwise termination of service, according to amended Industrial Dispute Act of 2010.

8 1. OECD EPL Database, update 2013. India 10: Valid cases for use of standard fixed term Temporary workers may be engaged for work which is essentially of a temporary nature likely to be finished contracts within a limited time. Exemptions exist for some industries (information technology and business processing outsourcing) and export processing and special economic zones in some states. 11: Maximum number of successive standard No limits. FTCs (initial contract plus renewals and/or prolongations). 12: Maximum cumulated duration of successive No limits. standard FTCs 13: Types of work for which temporary work According to central labour contract laws and rules, contract labour is generally allowed for non-core activities agency (TWA) employment is legal (although with some industries or firms prohibited from using contract labour).

9 However, there is no consensus about what is the effective regulatory environment applying to the staffing industry and whether contract labour laws and rules apply to that industry. This creates a lot of regulatory uncertainty. 14: Are there restrictions on the number of No for both assignments and contracts between the worker and the agency. renewals and/or prolongations of TWA. assignments? (f). 15: Maximum cumulated duration of TWA No limits for both assignments and contracts. assignments (f). 16: Does the set-up of a TWA require Contractors and user firms with more than 20 employees are required to obtain a license (and pay a fee and authorisation or reporting obligations?)

10 Security deposit) before engaging contract workers. The license is valid for 12 months, after which it can be renewed by following the same procedure. The contractor is required to report any changes in the number of workers employed or their conditions of work to the licensing authority. 17: Do regulations ensure equal treatment of The wage rates and working conditions of the contracted worker must be the same as those of a worker regular workers and agency workers at the user employed directly by the user firm to do the same type of work. firm? 18: Definition of collective dismissal (b) There are no additional regulations for collective dismissals but there are special regulations in the case of closure of an establishment with 50 or more workmen (art.

GUIDELINE FOR THE SUBMISSION OF A SOCIAL … 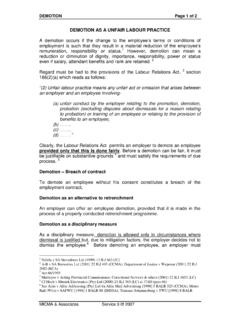 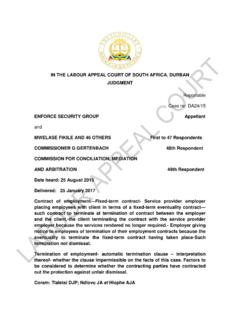 IN THE LABOUR APPEAL COURT OF SOUTH …

IN THE LABOUR APPEAL COURT OF SOUTH AFRICA, DURBAN . JUDGMENT . Reportable . Case no: DA24/15 . ENFORCE SECURITY GROUP Appellant . and . MWELASE FIKILE AND 46 OTHERS First to 47 Respondents 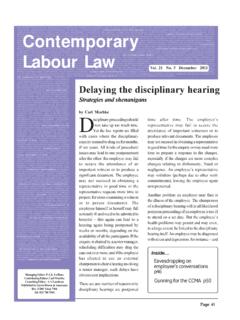 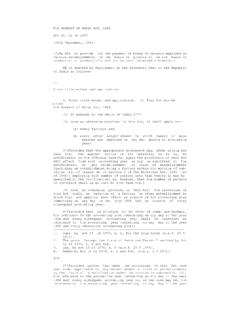 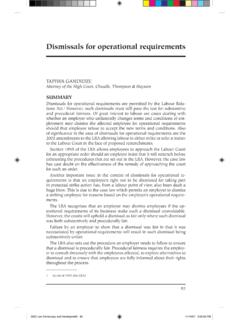 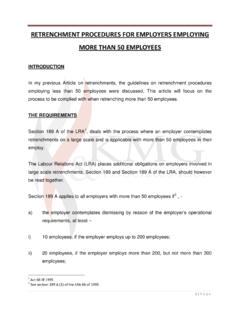 1 | Page RETRENCHMENT PROCEDURES FOR EMPLOYERS EMPLOYING MORE THAN 50 EMPLOYEES . INTRODUCTION . In my previous Article on retrenchments, the guidelines on retrenchment procedures