INSOLVENCY - Department of Justice and Constitutional ...

Hire-Purchase Act 36 of 1942 Insolvency Law Amendment Act 16 of 1943 ... lease, mortgage, pledge, delivery, payment, release, compromise, donation or any contract ... boarding-house keeper, or who acts as a broker or agent of any person in the sale or purchase

3 1 Repeal of laws The INSOLVENCY Act, 1916 (Act 32 of 1916), the INSOLVENCY Act, 1916, Amendment Act, 1926 (Act 29 of 1926) (except the title and preamble thereof and sections one , seventy-one , seventy-two and seventy-four thereof) and section twenty of the Land Bank Amendment Act, 1934 (Act 58 of 1934) are hereby repealed: Provided that if an estate was sequestrated or assigned before the commencement of this Act the sequestration or assignment and all proceedings in connection therewith shall be completed, and a person whose estate was sequestrated or assigned before such commencement and any matter relating to such sequestration, assignment or person shall be dealt with as if this Act had not been passed; and provided further that if, before the said commencement, any action was taken under the said Act 32 of 1916 with a view to the surrender or sequestration of an estate but the surrender or sequestration was not effected before the said commencement, such action shall, after such commencement, be deemed to have been taken under this Act, in so far as this Act makes provision therefor.

5 1 of Act 6 of 1972.] 'Court' or 'the Court' , in relation to any matter means the provincial or local division of the Supreme Court which has jurisdiction in that matter in terms of section one hundred and forty-nine or one hundred and fifty-one , or any judge of that division; and in relation to any offence under this Act or in section eight , twenty-six , twenty-nine , thirty , thirty-one , thirty-two , paragraph (a) of subsection (3) of section thirty-four , seventy-two , seventy-three , seventy-five , seventy-six , seventy-eight or one hundred and forty-seven the expression 'Court' or 'the Court' includes a magistrate's court which has jurisdiction in regard to the offence or matter in question; 'debtor' , in connection with the sequestration of the debtor's estate, means a person or a partnership or the estate of a person or partnership which is a debtor in the usual sense of the word, except a body corporate or a company or other association of persons which may be placed in liquidation under the law relating to Companies; 'disposition' means any transfer or abandonment of rights to property and includes a sale, lease , mortgage, pledge, delivery, payment, release, compromise, donation or any contract therefor, but does not include a disposition in compliance with an order of the court; and 'dispose' has a corresponding meaning; [Definition of 'disposition' substituted by s.

6 1 of Act 27 of 1987.] Page 2 of 96 INSOLVENCY5/15/2009http://juta/ 'free residue' , in relation to an insolvent estate, means that portion of the estate which is not subject to any right of preference by reason of any special mortgage, legal hypothec, pledge or right of retention; [Definition of 'free residue' amended by s. 2 (a) of Act 16 of 1943.] ' Gazette ' .. [Definition of ' Gazette' inserted by s. 2 (b) of Act 16 of 1943 and deleted by s. 1 of Act 49 of 1996.] 'good faith' , in relation to the disposition of property, means the absence of any intention to prejudice creditors in obtaining payment of their claims or to prefer one creditor above another; 'immovable property' means land and every right or interest in land or minerals which is registrable in any office in the Republic intended for the registration of title to land or the right to mine; 'insolvent' when used as a noun, means a debtor whose estate is under sequestration and includes such a debtor before the sequestration of his estate, according to the context; 'insolvent estate' means an estate under sequestration; 'magistrate' includes an additional magistrate and an assistant magistrate.

7 'Master' in relation to any matter, means the Master of the Supreme Court within whose area of jurisdiction that matter is to be dealt with and includes an Assistant Master; 'messenger' means a messenger of a magistrate's court and includes a deputy-messenger; 'Minister' means the Cabinet member responsible for the administration of Justice ; [Definition of 'Minister' inserted by s. 1 of Act 16 of 2003.] 'movable property' means every kind of property and every right or interest which is not immovable property; 'preference' , in relation to any claim against an insolvent estate, means the right to payment of that claim out of the assets of the estate in preference to other claims; and 'preferent' has a corresponding meaning; 'property' means movable or immovable property wherever situate within the Republic, and includes contingent interests in property other than the contingent interests of a fidei commissary heir or legatee; 'Republic'.

8 [Definition of 'Republic' ('Union') added by s. 2 (d) of Act 16 of 1943 and deleted by s. 1 of Act 49 of 1996.] 'security' , in relation to the claim of a creditor of an insolvent estate, means property of that estate over which the creditor has a preferent right by virtue of any special mortgage, landlord's legal hypothec, pledge or right of retention; 'sequestration order' means any order of court whereby an estate is sequestrated and includes a provisional order, when it has not been set aside; 'sheriff' includes a deputy sheriff; 'special mortgage' means a mortgage bond hypothecating any immovable property or a notarial mortgage bond hypothecating specially described movable property in terms of section 1 of the Security by Means of Movable Property Act, 1993 ( Act 57 of 1993 ), or such a notarial Page 3 of 96 INSOLVENCY5/15/2009http://juta/ bond registered before 7 May 1993 in terms of section 1 of the Notarial Bonds (Natal) Act, 1932 (Act 18 of 1932), but excludes any other mortgage bond hypothecating movable property; [Definition of 'special mortgage' inserted by s.]

10 And any person shall be deemed to be a trader for the purpose of this Act (except for the purposes of subsection (10) of section twenty-one) unless it is proved that he is not a trader as hereinbefore defined: Provided that if any person carries on the trade, business, industry or undertaking of selling property which he produced (either personally or through any servant) by means of farming operations, the provisions of this Act relating to traders only shall not apply to him in connection with his said trade, business, industry or undertaking; 'trustee' means the trustee of an estate under sequestration, and includes a provisional trustee. 3 Petition for acceptance of surrender of estate (1) An insolvent debtor or his agent or a person entrusted with the administration of the estate of a deceased insolvent debtor or of an insolvent debtor who is incapable of managing his own affairs, may petition the court for the acceptance of the surrender of the debtor's estate for the benefit of his creditors. 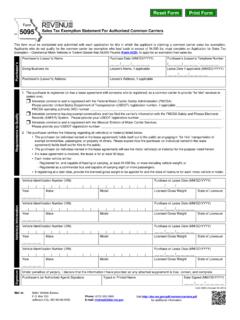 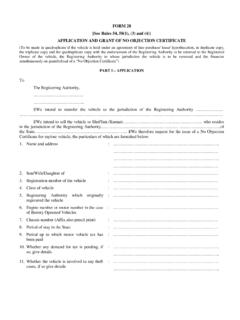 FORM 28 [See Rules 54, 58(1), (3) and (4)] APPLICATION AND GRANT OF NO OBJECTION CERTIFICATE (To be made in quadruplicate if the vehicle is held under an agreement of hire-purchase/ lease/ hypothecation, in duplicate copy, 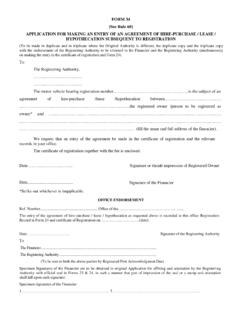 The entry of the agreement of hire-purchase / lease / hypoth ec ation as requ ested above is recorded in this of fice Registration R ec ord in Form 24 and ce rtificate of Registration on «««««««««« (d ate ). 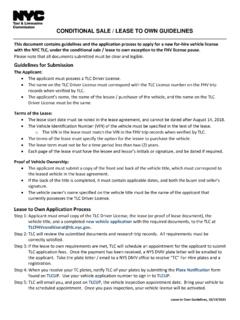 CONDITIONAL SALE / LEASE TO OWN GUIDELINES

CONDITIONAL SALE / LEASE TO OWN GUIDELINES Lease to Own Guidelines, 10/19/2021 This document contains guidelines and the application process to apply for a new for-hire vehicle license with the NYC TLC, under the conditional sale / lease to own exception to the FHV license pause. Please note that all documents submitted must be clear and legible. 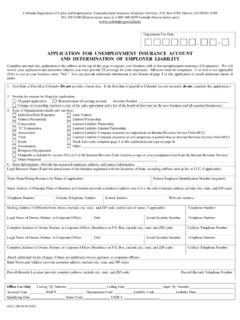 14. Business Acquisition—For purposes of this application, an acquisition is defined as the purchase or transfer of any or all of the assets and/or employees of a previously established business. If this business entity was acquired, in accordance with CESA 8-76-104, we must make a determination regarding the purpose of the business acquisition.