2 Tracks changes in legislation and develops training programs in accordance with new legislation. Communicates changes in legislation with relevant stakeholders. Maintains effective communications with colleagues both in/outside department. Managing Staff - Sets performance goals with staff members and ensures that goals are directly linked to Department goals for the year. Provides feedback to staff members ongoing throughout the year in a timely manner. Addresses performance issues within team and creates a climate of recognition and appreciation for work that is performed well. Planning, Budgeting and Work Improvements - Develops budget forecasts and plans for upcoming year in conjunction with Director. Anticipates future costs and expenditures for work-unit. Manages and stays within current budget levels. Communicates staffing level needs to Director.

3 Engages staff within team to find ways to find work improvements and reduce costs. Key Actions, Goal (outcome) Actual Results Measures of Success & Timeframe Ensure 100% of all government Identify previous year results by compiling 100% of all government inspector inspector warnings are addressed data from 2006-2007 by September 30, warnings were addressed within within schools and departments within 2007. schools and departments within 10. 10 working days by June 30, 2008. meet with all internal stakeholders to working days by June 30, 2008. determine why recommendations were not Key action steps were addressed implemented by November 30, 2007. within stated timelines. Agree to process and future actions steps to School/Department feedback was address government inspector warnings with positive towards initiative and internal stakeholders by December 31, 2007.

4 Deemed successful by key Implement new process and action steps by stakeholders. January 31, and monitor progress starting February 1, 2008 and communicate results on a monthly basis. Address any outstanding issues with schools or departments ongoing. Page 1 of 5. Reduce days lost due to accidents to no Identify top 5 reasons for lost time accidents Days lost due to accidents were more than 1% of total days worked by from previous year using data reports and reduced to no more than 1% of January 1, 2008. colleague feedback by July 31, 2007. total days worked by January 1, Develop a communications and training 2008. program with assistance of team members Key action steps were addressed and communications department by August within stated timelines. 31, 2007. School/Department feedback was Implement training and communications positive towards initiative and program by September 1, 2007.

5 Deemed successful by key Monitor progress using data tracking sheets stakeholders. with Human Resources Department starting October 2007. Communicate results on a monthly basis starting November 2007. Develop a process so that 95% of new Work with Human Resources Department to Process developed so that 95% of staff members are trained in the establish a process for accurately tracking new staff members were trained in handling of hazardous materials within new hires to the University by September 30, the handling of hazardous their first month at Columbia University 2007. materials within their first month at by December 31, 2007. Create a format to accurately capture all Columbia University by December colleagues who attended a training program 31, 2007. on hazardous materials by September 30, Key action steps were addressed 2007. within stated timelines.

6 Report numbers of training program School/Department feedback was attendees starting October 31, 2007. positive towards initiative and Determine new staff that did not attend deemed successful by key program and ensure they are booked into stakeholders. next available session starting November 30, 2007. Communicate work goals for all staff Build and confirm goals for your position with Work goals communicated to all within your team by September 30, Director by July 31, 2007. staff within your team by 2007. Conduct formal coaching check- Establish and conduct meetings with all September 30, 2007. in meetings with all staff in your team direct reports and share your goals with them Conducted formal coaching check- every 3 months. to cascade goals to the next level by August in meetings with all staff in your 31, 2007. team every 3 months.

7 Performance goals for all staff finalized by Staff indicated a strong September 31, 2007. understanding of Department Provide ongoing coaching to staff members goals as evidenced in staff and conduct formal review meetings with feedback survey. staff on a quarterly basis throughout the year. Provide work-unit budget for upcoming Analyze current year budget results to Work-unit budget for upcoming year by January 31, 2008, and manage determine upcoming year anticipated budget year prepared on time. annual budget on a monthly basis so and resource needs by December 31, 2007. Managed annual budget on a that it is within 10% of forecast by fiscal Share findings with Director and monthly basis to within 10% of year end. recommendations by January 31, 2008. forecast by fiscal year end. Monitor current year budget expenses on a monthly basis, and encourage team members to understand the budget and track expenses closely ongoing.

8 If budget is tracking to come over forecast, identify and recommend solutions to Director to ensure budget is not over by fiscal year end ongoing. Page 2 of 5. Performance Attributes: Initiating Action Takes prompt action to accomplish objectives; takes action to achieve goals beyond what is required; is proactive Key Actions Responds quickly Takes immediate action when confronted with a problem or when made aware of a situation. Takes independent action Implements new ideas or potential solutions without prompting; does not wait for others to take action or to request action. Goes above and beyond Takes action that goes beyond job requirements in order to achieve objectives. Comments William met EXPECTATIONS in the area of initiating action over the past year. He did not require much supervision, and there were instances where he went above and beyond in his actions.

9 In general, William displayed an adequate amount of initiative last year. He attempted to function independently and was successful in this regard on normal, daily tasks. Communication Clearly conveys information and ideas through a variety of media to individuals or groups in a manner that engages the audience and helps them understand and retain the message. Key Actions Organizes the communication Clarifies purpose and importance; stresses major points; follows a logical sequence. Maintains audience attention Keeps the audience engaged through use of techniques such as analogies, illustrations, humor, an appealing style, body language, and voice inflection. Adjusts to the audience Frames message in line with audience experience, background, and EXPECTATIONS ; uses terms, examples, and analogies that are meaningful to the audience. Ensures understanding Seeks input from audience; checks understanding; presents message in different ways to enhance understanding.

10 Adheres to accepted conventions Uses syntax, pace, volume, diction, and mechanics appropriate to the media being used. Comprehends communication from others Attends to messages from others; correctly interprets messages and responds appropriately. Comments William met EXPECTATIONS in the area of communication over the past year. Communications were delivered in a clear and concise manner. William seemed to be most successful at communication when communicating to an audience that was similar to him. There were many instances when he delivered a message to a colleague in the department that was organized, understandable, and effective. Decision Making Identifies and understands issues, problems, and opportunities; comparing data from different sources to draw conclusions; uses effective approaches for choosing a course of action or developing appropriate solutions; takes action that is consistent with available facts, constraints, and probable consequences.

Page 4 of 6 Comments William met expectations in the areas of decision making and judgment over the past year. He functioned at a satisfactory level with most 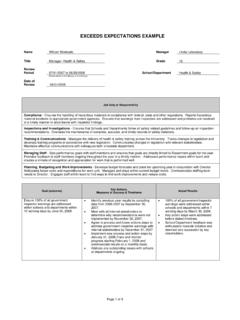 Page 4 of 6 Comments William exceeded expectations in the area of decision making last year. He excelled in all aspects of the decision-making process,

GUIDELINES FOR THE COACHING REQUIREMENTS

3 GUIDELINES FOR THE COACHING REQUIREMENTS Regulations of the Commissioner of Education Section 135.4 (c) (7) (i) (c) and Section 135.5 The University of the State of New York

July 1, 2011 – June 30, 2013 . Rules and Regulations . Governing Athletics . A Handbook for Principals and Athletic Directors . of schools that . are members of the 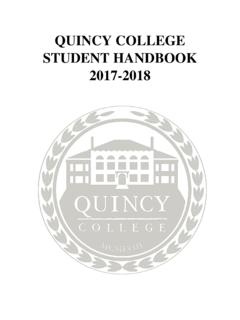 As Quincy College moves forward, we will remain focused on teaching and learning by updating our present academic offerings, developing new academic programs, and increasing student engagement and retention. 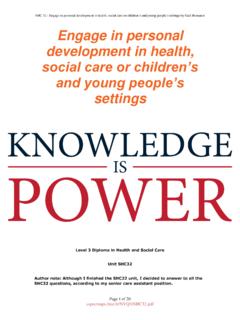 CHIEF DIRECTOR: INTERNAL AUDIT AND INVESTIGATION SERVICES Salary: All-inclusive salary package of R1 127 334.00 per annum. (Total package to be structured in accordance with the rules of the Senior Management 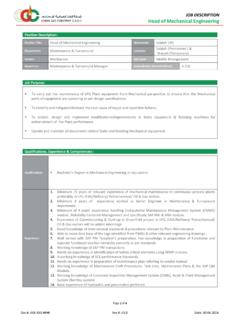