Eric Roberts Handout #21. CS 106B January 30, 2015. Memory and C++. Data Types in C++. Memory and C++ The data types that C++ inherits from C: Atomic types: short, int, long, and their unsigned variants float, double, and long double char bool Enumerated types defined using the enum keyword Structure types defined using the struct keyword Eric Roberts Arrays of some base type CS 106B. January 30, 2015 Pointers to a target type Simple Arrays in C++ A Simple Array Example We haven't actually used arrays in their low-level form this quarter, because the Vector class is so much better. const int N = 10;. int main() {. From the client perspective, an array is like a brain-damaged int array[N];. form of Vector with the following differences: for ( int i = 0 ; i < N ; i++ ) {.}}

• The fundamental unit of memory inside a computer is called a bit, which is a contraction of the words binary digit. A bit can be in either of two states, usually denoted as 0 and 1. ... Pointer Operators • C++ includes two built-in operators for working with pointers: – The address-of operator (&) is written before a variable name (or

1 Eric Roberts Handout #21. CS 106B January 30, 2015. Memory and C++. Data Types in C++. Memory and C++ The data types that C++ inherits from C: Atomic types: short, int, long, and their unsigned variants float, double, and long double char bool Enumerated types defined using the enum keyword Structure types defined using the struct keyword Eric Roberts Arrays of some base type CS 106B. January 30, 2015 Pointers to a target type Simple Arrays in C++ A Simple Array Example We haven't actually used arrays in their low-level form this quarter, because the Vector class is so much better. const int N = 10;. int main() {. From the client perspective, an array is like a brain-damaged int array[N];. form of Vector with the following differences: for ( int i = 0 ; i < N ; i++ ) {.}}

2 The only operation is selection using [] array[i] = randomInteger(100, 999);. Array selection does not check that the index is in range }. i array sort(array, N);. The length of an array is fixed at the time it is created } 10. Arrays don't store their length, so programs that use them must pass an extra integer value that represents the effective size Array variables are declared using the following syntax: type name[n];. 809 503 946 367 987 838 259 236 659 361. 0 1 2 3 4 5 6 7 8 9. where type is the element type, name is the array name, and n is a constant integer expression indicating the length. The Structure of Memory Binary Notation The fundamental unit of Memory inside a Computer is called a Bytes and words can be used to represent integers of different bit, which is a contraction of the words binary digit.

3 A bit can sizes by interpreting the bits as a number in binary notation. be in either of two states, usually denoted as 0 and 1. Binary notation is similar to decimal notation but uses a The hardware structure of a Computer combines individual different base. Decimal numbers use 10 as their base, which bits into larger units. In most modern architectures, the means that each digit counts for ten times as much as the digit smallest unit on which the hardware operates is a sequence of to its right. Binary notation uses base 2, which means that eight consecutive bits called a byte. The following diagram each position counts for twice as much, as follows: shows a byte containing a combination of 0s and 1s: 0 0 1 0 1 0 1 0.

6 The advantage of using either octal or hexadecimal notation is that doing so makes it easy to translate the number back to Numbers do not have bases; representations do. individual bits because you can convert each digit separately. Exercises: Number Bases Memory and Addresses 0000. What is the decimal value for each of the following numbers? Every byte inside the primary Memory of a machine 0004. is identified by a numeric address. The addresses 0008. 100012 1778 AD16 begin at 0 and extend up to the number of bytes in 000C. 0010. the machine, as shown in the diagram on the right. 0014. 0018. 001C. Memory diagrams that show individual bytes are 0020. 0024. not as useful as those that are organized into words. 0028. As part of a code to identify the file type, every Java class file The revised diagram on the right now includes four.

7 002C. begins with the following sixteen bits: bytes in each of the Memory cells, which means that .. 1 1 0 0 1 0 1 0 1 1 1 1 1 1 1 0. the address numbers increase by four each time. FFD0. FFD4. FFD8. In these slides, addresses are four-digit hexadecimal FFDC. How would you express that number in hexadecimal notation? numbers, which makes them easy to recognize. FFE0. FFE4. FFE8. When you create Memory diagrams, you don't FFEC. know the actual Memory addresses at which values FFF0. FFF4. are stored, but you do know that everything has an FFF8. FFFC. address. Just make something up. The Allocation of Memory to Variables Sizes of the Fundamental Types When you declare a variable in a program, C++ allocates The Memory space required to represent a value depends on space for that variable from one of several Memory regions.

8 The type of value. Although the C++ standard actually allows One region of Memory is reserved for variables that 0000 compilers some flexibility, the following sizes are typical: static persist throughout the lifetime of the program, such data 1 byte 2 bytes 4 bytes 8 bytes 16 bytes (8 bits) (16 bits) (32 bits) (64 bits) (128 bits). as constants. This information is called static data. char short int long long double Each time you call a method, C++ allocates a new bool float double block of Memory called a stack frame to hold its heap local variables. These stack frames come from a Enumerated types are typically assigned the space of an int. region of Memory called the stack. Structure types have a size equal to the sum of their fields.

9 It is also possible to allocate Memory dynamically, Arrays take up the element size times the number of elements. as described in Chapter 12. This space comes from a pool of Memory called the heap. Pointers take up the space needed to hold an address, which is stack 4 bytes on a 32-bit machine and 8 bytes on a 64-bit machine. In classical architectures, the stack and heap grow toward each other to maximize the available space. FFFF The expression sizeof(t) returns the size of the type t. 3 . Pointers Declaring a Pointer Variable In C++, every value is stored somewhere in Memory and can Pointer variables have a declaration syntax that may at first therefore be identified with that address. Such addresses are seem confusing.

10 To declare a variable as a pointer to a called pointers. particular type as opposed to a variable of that type, all you need to do is add a * in front of the variable name, like this: Because C++ is designed to allow programmers to control data at the lowest level, pointers can be manipulated just like type *var;. any other kind of data. In particularly, you can assign one pointer value to another, which means that the two pointers For example, if you wanted to declare a variable px to be a end up indicating the same data value. pointer to a double value, you could do so as follows: Diagrams that involve pointers are typically represented in double *px;. two different ways. Using Memory addresses emphasizes the fact that pointers are just like integers. 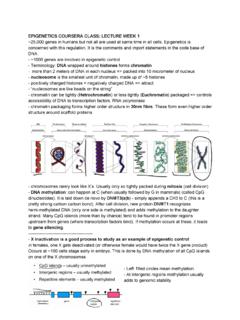 epigenetics coursera class: lecture week 2 ­ Acetylation or Methylation (among other things) can happen at N­terminal tails of histones. ­ Various molecules can bind to histones, some suggest there is a “histone code”, as these all 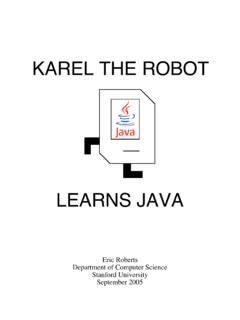 the word Karel in a Karel program represents the entire class of robots that know how to respond to the move() , turnLeft() , pickBeeper() , and putBeeper() commands. Whenever you have an actual robot in the world, that robot is an object that represents a 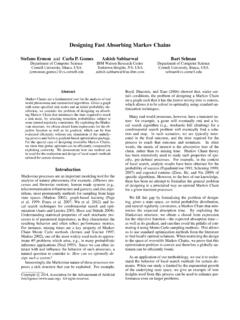 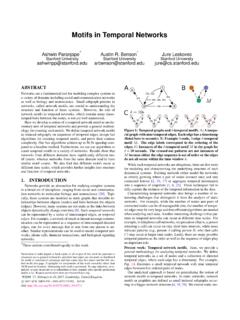 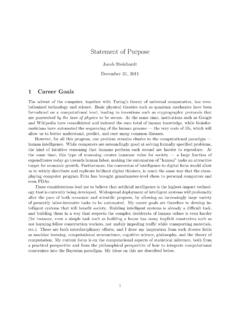 Statement of Purpose Jacob Steinhardt December 31, 2011 1 Career Goals The advent of the computer, together with Turing’s theory of universal computation, has revo- 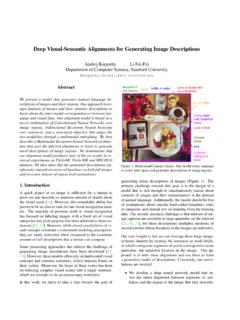 Figure 2. Overview of our approach. A dataset of images and their sentence descriptions is the input to our model (left). Our model ﬁrst infers the correspondences (middle, Section3.1) and then learns to generate novel descriptions (right, Section3.2). 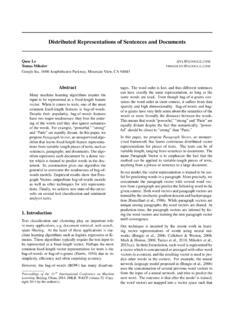 Distributed Representations of Sentences and Documents

unique vector, represented by a column in matrix W. The paragraph vector and word vectors are averaged or concate-nated to predict the next word in a context. In the experi-ments, we use concatenation as the method to combine the vectors. More formally, the only change in this model compared to the word vector framework is in equation 1, where h is 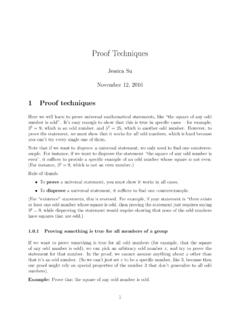 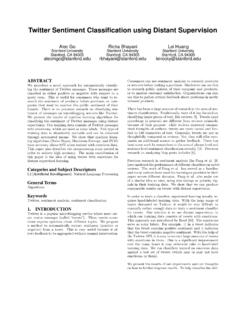 Guide to the MSCS Program Sheet

statistics can usually be satisfied by any course in probability taught from a rigorous mathematical perspective. Courses in statistics designed for social scientists generally do not have the necessary sophistication. A useful rule of thumb is that courses satisfying this requirement must have a calculus prerequisite. 3. 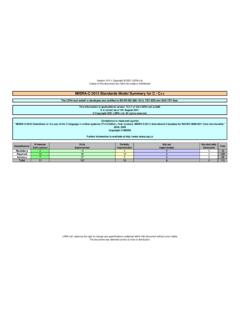 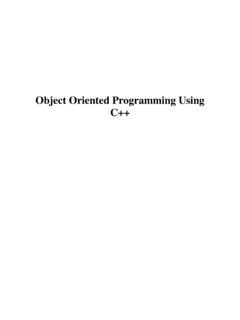 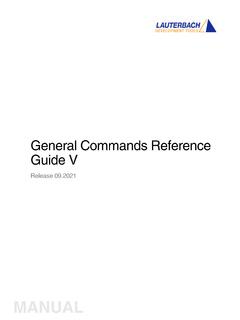 Pointers to nested C++ classes may be converted into a pointer to the most derived class of the object. If this is not possible the operation returns the regular pointer. The syntax for MODULA2/PASCAL expressions has been extended for type casts and hexadecimal numbers. Var.TYPE %Multiline Tree //displays the layout of class 'Tree' struct 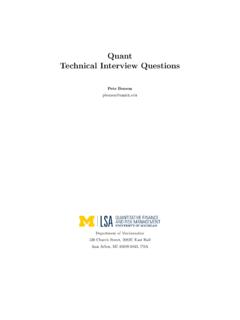 Bachelor of Technology - Internet of Things 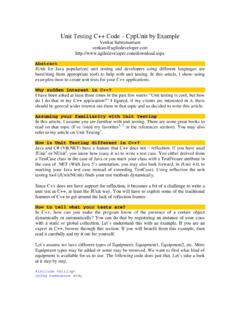 Using reflection the unit testing tool (JUnit/NUnit) finds your test methods dynamically. Since C++ does not have support for reflection, it becomes a bit of a challenge to write a unit test in C++, at least the JUnit way. You will have to exploit some of the traditional features of C++ to get around the lack of reflection feature. 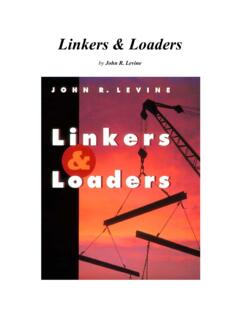 again particularly for modern languages.C++ places unique de-mands on a linker,and large C++ programs are prone to develop hard-to-diagnose bugs due to unexpected things that happen at link time. (Thebest known are static constructors that run in an an or-der the programmer wasn’texpecting.) Linker features such as