2 Retirement benefits are the accumulated savings of a lifetime of service. Denial, non-payment or delayed payment of the same is not only tantamount to denial of an individual's rightful property, but is also a violation of the Human Rights of the victim and their next of kin wherein their livelihood is affected, often times resulting in untold misery, starvation and poverty. This book not only chronicles the Commission 's exposition of retiral benefits as a Human right but also extolls its unique undertakings to alleviate the suffering of innumerable families bereft of their rightful dues, thus leading the nodal agencies of the Indian bureaucratic system towards timely deliverance of retiral dues and benefits. National Human Rights Commission I extend my heartfelt thanks to Sh. Garg, Registrar (Law). and Sh. Parashar Joint Registrar (Law) & Focal Point for HRDs, who, with their extensive efforts have worked on various aspects of this topic and made this book a reality.

3 I also extend my thanks to Ilavarasi (Intern) and Rohan Agrawal (Intern), who were of immense help for required research on the subject and contributed in finalizing the contents of the book. New Delhi (Justice Balakrishnan). 10 December 2014. 6. PREFACE. The National Human Rights Commission of India is mandated under Section 12(i) of Protection of Human Rights Act, 1993 to protect and promote the Human Rights of the citizens of this country. The Commission , while spearheading the defense of Human Rights at every level, has also paved the way for a continuously dynamic interpretation of its scope. This publication aims at portraying the Commission 's interpretation of retiral benefits as a Human right and its subsequent efforts to ensure a strong platform of redressal for victims and families suffering from poverty and hardship, upon denial of their hard earned retiral benefits and dues. ( ). Focal Point, HRD. Joint Registrar (Law). nhrc , India PROLOGUE: One Puttu Lal, a class-IV employee of the Social Welfare Department of Government of Uttar Pradesh, died in service in the year 1979.

4 His 78 year old widow, Ramjilai @ Shanti Devi, complained to the Commission , in 2010, that even after a lapse of 31 years, she had not been paid the retiral benefits of her late husband and family pension. Hence her family was on the verge of starvation, she was not able to solemnize the marriage of her marriageable daughters and so forth. When this fact was brought to the notice of the State Authorities, they put a false and lame excuse forth, that the family had not applied for these benefits1. Pension or retirement benefits like Gratuity, leave encashment, provident fund or any other benefit payable at the time of the retirement is to be made on the day of retirement or within a stipulated time period, in case of termination of the contract of employment due to voluntary retirement, retrenchment, layoff etc., to the employees, and in case of death of the employees during the course of employment or in employment, to his nominee or next of kin, within a stipulated or reasonable time period, where it is not stipulated.

5 If not provided within this time period, interest is to be paid on the delayed payments. The pension or the retiral benefits may be the only source of livelihood and means of survival for them; hence non-payment of these benefits may have devastating effects on their lives. Since it is the question of the very survival of the retired employee or next- of-kin, and / or family members of the deceased employees, if these National Human Rights Commission retirement benefits are not paid to them, it violates their Human Rights . The retirement benefits may be paid to the employees of the Central Government, as per the provisions of CCS (Pension) Rules;. to the employees of the State Government, as per the Rules adopted by the concerned State government; to the employees of CPSUs/. SPSUs, run, owned, financed or substantially managed by the Central Government or the State Governments, under the Employment standing Orders adopted by them. However, some employees of the Corporation (Such as Municipal Corporation Delhi, as decided by the Hon'ble Supreme Court of India in the matter of Municipal Corporation of Delhi v.)

6 Dharam Prakash Sharma2), and other Public Sector Undertakings may be provided one or other benefit under the Statutes enacted and dealing with the subject, such as Payment of Gratuity Act, 1972, Employees State Insurance Act, 1948, Employee's Compensation Act, 1923, etc. In some of the cases, the Public authorities may be the disbursing authority of pension or the provident fund such as Employees' Provident fund Organisation (EPFO) under the Employees' Provident fund and Miscellaneous Provisions Act, 1948. The Supreme Court of India in Nakara & Others vs. Union of India3 has made the following observations on right to pension. The antiquated notion of pension being a bounty or a gratuitous payment depending upon the sweet will or grace of the employer not claimable as a right and therefore, no right to pension can be enforced through Court has been swept under the carpet by the decision of the Constitution Bench in Deoki Nandan Prasad v. State of Bihar 10. Retiral Benefits as a Human Right nhrc Initiatives & Ors.

7 (1) wherein this Court authoritatively ruled that pension is a right and the payment of it does not depend upon the discretion of the Government but is governed by rules and a Government servant coming within those rules is entitled to claim pension . Pension is the deferred portion of compensation for long and devoted services rendered by an employee with the employer. It is a social welfare measure as well. Article 21 of the Constitution of India guarantees everyone a fundamental right to livelihood, which includes entitlement to receive his deferred wages in accordance with rules, after retirement. Non-payment of retiral benefits therefore, is a violation of one's fundamental right under Article 21. The right to receive the same is not only a fundamental right but is also a right to property under Article 300-A of Constitution of India which cannot be taken away except by Authority of Law. The Commission , in numerous cases, has observed that there was inordinate delay in the payment of the retirement dues to the employees, by the authorities.

8 In number of cases payments were made even after a lapse of more than three decades, that too after the intervention of the Commission . The perpetrators of these violations came out with untenable excuses for non-payment of the pension and other retirement benefits to the beneficiaries. 11. CHAPTER-1. INTERNATIONAL COVENANTS AND LAWS. Should any political party attempt to abolish social security, unemployment insurance, and eliminate labor laws and farm programs, you would not hear of that party again in our political history.. President Dwight D. Eisenhower There are number of International Declarations, Conventions or International Instruments and International Laws covering, propagating or making aspects of social security (in general), pension and retiral benefits in particular, a core Human Rights issue. Therefore, all the states are required to work towards realizing these mandates. The effects of international law on the legal fabric of the countries of the world are varied and multitudinal.

9 India, however, follows the dualist school of law with respect to international laws and covenants4. Therefore, international treaties do not translate into National law, as a matter of course. They must be assimilated into the legal system in the form of Parliamentary legislation. Some of these International Declarations, Instruments, Conventions and Laws are given hereunder: 1) The Universal Declaration of Human Rights (UDHR)5. UDHR is a declaration adopted by the United Nations General Assembly on 10th December, 1948 at Paris. The Declaration arose Retiral Benefits as a Human Right nhrc Initiatives directly from the experience of the Second World War and represents the first global expression of Rights to which all Human beings are inherently entitled. The preamble states that, Whereas recognition of the inherent dignity and of the equal and inalienable Rights of all members of the Human family is the foundation of freedom, justice and peace in the world.

10 Article 3 reads as, Everyone has the right to life, liberty and security of person.. Article 25 (1) states that, Everyone has the right to a standard of living adequate for the health and well-being of himself and of his family, including food, clothing, housing and medical care and necessary social services, and the right to security in the event of unemployment, sickness, disability, widowhood, old age or other lack of livelihood in circumstances beyond his control.. 2) International Covenant on Economic, Social and Cultural Rights (ICESCR). Adopted and opened for signature, ratification and accession by General Assembly resolution 2200A (XXI) of 16 December 1966. entry into force 3 January 1976, in accordance with article 27. Its Preamble recognizes that the inherent dignity, the equal and inalienable Rights of all members of the Human family are considered the foundation of freedom, justice and peace in the world. Recognizing that, in accordance with the Universal Declaration of Human Rights , the ideal of Human beings enjoying freedom from fear and want can only be achieved if conditions are created whereby everyone may enjoy his economic, social and cultural Rights , as well as his civil and political Rights , 13. 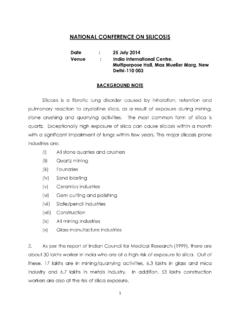 4 7. The NHRC is of the view that the occupational hazard of silicosis is preventable if the working conditions are properly regulated and proper

A MANUAL ON POLICE STANDING ORDER 151 …