3 Currently, the computer on your desk can tackle problems that were inaccessible to the fastest supercomputers just 5 or 10 years ago. This chapter will describe some basic Methods and techniques for programming simulations of Differential Equations . First, we will review some basic concepts of Numerical approximations and then introduce Euler's method, the simplest method. We will provide details on algorithm development using the Euler method as an example. Next we will discuss error approximation and discuss some better techniques. Finally we will use the algorithms that are built into the MATLAB programming environment. The fundamental concepts in this chapter will be introduced along with practical implementation programs.

4 In this chapter we will present the programs written in the MATLAB programming language. It should be stressed that the results are not particular to MATLAB; all the programs in this chapter could easily be implemented in any programming language, such as C, Java, or assembly. MATLAB is a convenient choice as it was designed for scientific computing (not general purpose software development) and has a variety of Numerical operations and Numerical graphical display capabilities built in. The use of MATLAB allows the student to focus more on the concepts and less on the programming. FIRST ORDER SYSTEMS. A simple first order Differential equation has general form.

5 ( ).. where means the change in y with respect to time and . is any function of y and time. Note that the derivative of the variable, , depends upon itself. There are many different notations for , common ones include and . One of the simplest Differential Equations is .. ( ). We will concentrate on this equation to introduce the many of the concepts. The equation is convenient because the easy analytical solution will allow us to check if our Numerical scheme is accurate. This first order equation is also relevant in that it governs the behavior of a heating and cooling, radioactive decay of materials, absorption of drugs in the body, the charging of a capacitor, and population growth just to name a few.

6 To solve the equation analytically, we start by rearranging the equation as .. ( ). and integrate once with respect to time to obtain .. ( ). where C is a constant of integration. We remove the natural log term by taking the exponential of the entire equation !#"%$'&)(+* !-,/.10 ( ). FIRST ORDER SYSTEMS 3. which finally can be written as ! .10 . ( ). You can check that this answer satisfies the equation by substituting the solution back into the original equation. Since we obtained the solution by integration, there will always be a constant of integration that remains to be . specified. This constant (C in our above solution) is specified by an initial condition or the initial state of the system.

7 For simplicity of this chapter, we will proceed with the initial condition that , yielding C=1. Discrete derivative You should recall that the derivative of a function is equivalent to the slope. If you plotted the position of a car traveling along a long, straight, Midwestern highway as a function of time, the slope of that curve is the velocity - the derivative of position. We can use this intuitive concept of slope to numerically compute the discrete derivative of a known function. On the computer we represent continuous functions as a collection discrete, sampled values. To estimate the . slope (derivative) at any point on the curve we can simply take the change in rise divided by the change in run at any of the closely spaced points, and.

9 Using the MATLAB diff command, we can evaluate the difference between neighboring points in the arrays and , which is used to compute an estimate points in a list of numbers of . the derivative. ) . The diff as . command .. simply takes . the +difference ) .. of neighboring .. The resulting list is one element shorter than the original function. Finally, in the script we plot the Numerical and analytical function for the derivative. The plot that results from the script is shown in Figure We see derivative is approximate, but appears to be generally correct. We will explore the error in this approximation in the exercises below and more formally in a later section.

10 Euler's method We can use the Numerical derivative from the previous section to derive a simple method for approximating the solution to Differential Equations . When we know the the governing Differential equation and the start time then we know the derivative (slope) of the solution at the initial condition. The initial slope is simply the right hand side . of Equation Our first Numerical method, known as Euler's method, will use this initial slope to extrapolate .. and predict the future. For the case of the function , , the slope at the initial condition is extrapolation is valid for times not to far in the future ( . In Figure we show the function and the extrapolation based on the initial condition.) 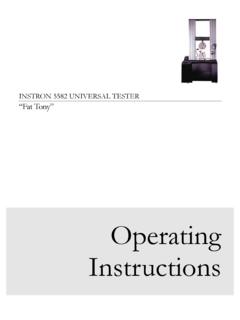 INSTRON 5582 UNIVERSAL TESTER 2 Background Information A vast number of standardized tests are available for the measurement of mechanical properties. 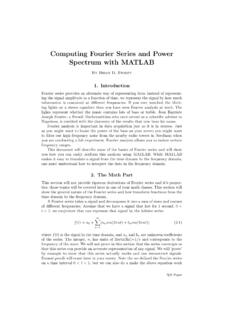 2 Fourier Series for any time interval. We will discuss diﬁerent time intervals later, but will use the one second interval for convenience at this point. 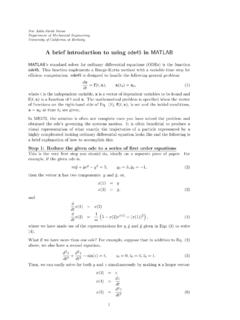 A brief introduction to using ode45 in MATLAB An interactive introduction to MATLAB

1 BASIC CONCEPTS 1.1matlab in the school of engineering MATLAB is currently available under Microsoft Windows and Linux oper-atingsystems intheSchoolof …