OCEAN CARGO INSURANCE . GLOSSARY OF TERMS . THIS GLOSSARY CONTAINS DEFINITIONS OF TERMS COMMONLY USED IN. CONNCETION WITH OCEAN CARGO INSURANCE . THIS INFORMATION WAS. COMPILED FRO THE 2002 A to Z OF INTERNATIONAL TRADE PUBLISHED BY. THE INTERNATIONAL CHAMBER OF COMMERCE, VARIOUS PUBLICATIONS. OF THE AMERICAN INSTITUTE OF MARINE UNDERWRITERS AND OTHER. AS AN INTERNAL REFERENCE GUIDE TO HELP. UNDERSTAND THE NOMENCLATURE OF THE OCEAN CARGO INSURANCE . MARKET. THIS INFORMATION IS CURRENT AS OF FEBRUARY 2007. OCEAN CARGO GLOSSARY ABI: An abbreviation for Automated Broker Interface , an EDI facility available to Customs Brokers for the reporting of customs entry information to Customs and which facilitates release of CARGO .

1 OCEAN CARGO INSURANCE . GLOSSARY OF TERMS . THIS GLOSSARY CONTAINS DEFINITIONS OF TERMS COMMONLY USED IN. CONNCETION WITH OCEAN CARGO INSURANCE . THIS INFORMATION WAS. COMPILED FRO THE 2002 A to Z OF INTERNATIONAL TRADE PUBLISHED BY. THE INTERNATIONAL CHAMBER OF COMMERCE, VARIOUS PUBLICATIONS. OF THE AMERICAN INSTITUTE OF MARINE UNDERWRITERS AND OTHER. AS AN INTERNAL REFERENCE GUIDE TO HELP. UNDERSTAND THE NOMENCLATURE OF THE OCEAN CARGO INSURANCE . MARKET. THIS INFORMATION IS CURRENT AS OF FEBRUARY 2007. OCEAN CARGO GLOSSARY ABI: An abbreviation for Automated Broker Interface , an EDI facility available to Customs Brokers for the reporting of customs entry information to Customs and which facilitates release of CARGO .

2 Abaft: "Aft"- Towards the rear (stern) of a vessel. Abandonment: In marine INSURANCE , a term used to define the act of an insured giving up the proprietary rights in insured property to the underwriter in exchange for payment of a constructive total loss. Abeam: At right angle to a vessel's centerline. ABS: An abbreviation for "American Bureau of Shipping", the classification society of the USA. Also, their publication listing the names and particulars of vessels classed by them and others. Absolute Exclusion: A clause in an INSURANCE policy that excludes certain types of losses or causes of loss without qualification (Example: excluding shortage, leakage or contamination).

3 Access Trunk: The passageways between the various vessel decks, for example from the weather deck to the tween deck or from the tween deck to the lower hold. Accident: In marine INSURANCE , an unforeseen occurrence or event; a fortuitous event, usually resulting in physical damage to a conveyance or CARGO . Accident To A Conveyance: An accident to the vessel or other conveyance transporting CARGO that usually results in damage to the conveyance and/or CARGO . Accumulation Clause: A clause in a CARGO policy which automatically increases the policy limit (usually to twice the amount) if shipments accumulate at some point or place during transit without the assured's (or assignee's, if any) knowledge or consent.

4 Acknowledgement: In marine INSURANCE , a form issued to acknowledge that INSURANCE is in effect for a specific shipment. Usually issued to a consignee by the shipper or someone acting on their behalf, such as a freight forwarder. The issuer may not have details of the actual coverage provided by the policy. Actinic Degradation: The diffusion of light and impedance of heat rays. ACS: An abbreviation for Automated Commercial System . an electronic system of Customs which allows on line access to certain trade information. Actual Cash Value: ACV - In general, the actual value of the subject matter at the time of loss.

6 An addendum. OCEAN CARGO GLOSSARY - PMM Dept - Version 3: February 2004 Page 1. Adjuster: Individual charged with the responsibility of determining if a particular loss is covered by the INSURANCE policy and, if so, the amount which will be paid to the claimant. May be a company employee or independent (public) adjuster acting on the company's behalf. Admitted INSURANCE : INSURANCE which must be placed in a domestic INSURANCE market with an appropriately licensed INSURANCE company. Ad Valorem: In general, any charge based on a monetary value. Ad Valorem Bill of Lading: Valued Bill of Lading - A bill of lading issued by the carrier which indicates an amount which the shipper has declared as the value of merchandise.

7 The carrier will be liable for this amount in the event he is found liable for loss or damage to the merchandise. Ad Valorem Duty: Customs duty assessed on the value of the goods. Advance: Part of the formula used to determine insured value. It is an agreed percentage increase applied to the total of invoice and OCEAN /air freight. This provides for unknown expenses at the time of shipment, such as port fees, clearance charges and inland freight in the country of destination, and a portion of the assured's profit. It also may be used to develop sufficient value on the merchandise in order to prevent coinsurance in the event of a General Average.

8 Advanced Freight: Freight paid to the carrier by the shipper or consignee (depending upon the TERMS of sale) or someone acting on their behalf, such as a freight forwarder, when merchandise is accepted for shipment. Not refundable, even if the vessel and/or CARGO does not arrive at the intended port of discharge. Also referred to as Prepaid Freight. Advising Bank: A bank, usually in the country of origin, that receives a letter of credit from the issuing bank and advises the shipper, or other party named in the letter of credit as the beneficiary, that a letter of credit has been opened in their favor and of the steps they must take to collect payment.

9 The advising bank assumes no obligation to pay the credit. AES: An abbreviation for Automated Export System , an EDI facility enabling exporters to electronically file SED data with multiple federal agencies simultaneously. AFT: "Abaft" - Towards the rear (stern) of a vessel. Affreightment: Contract of Affreightment , Contract of Carriage - A contract which sets forth the obligations of both a shipper and a carrier concerning transportation of the merchandise. The most common forms of affreightment are known as Bills of Lading and Waybills. Agency For International Development: An agency of the US government that subsidizes private shipments of goods and services to foreign countries.

Step 1 ~ Review Enrollment Forms To begin the enrollment process, the Chubb Customer Center will provide you with the following enrollment forms

MANAGING THREATS OF VIOLENCE IN THE …

FIDUCIARY LIABILITY LOSS PREVENTION Prepared by Dan A. Bailey Bailey Cavalieri LLC For the Chubb Group of Insurance Companies Note: The views expressed herein are those of the author and may or may not reflect the views 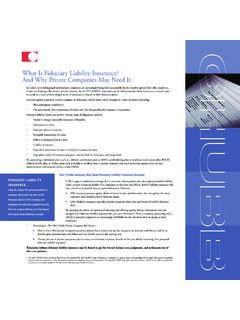 What Is Fiduciary Liability Insurance? And Why … 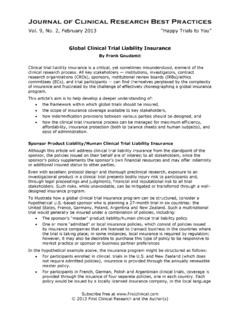 The California MPN is an Optional Program that includes all employees within an organization for their work Comp claims. Employee MPN Information Notification Packet 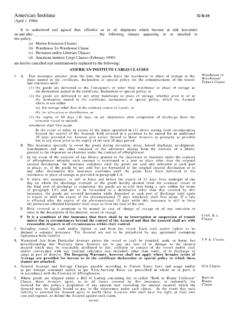 American Institute 32 B-10 (April 1, 1966) It is understood and agreed that, effective as to all shipments which become at risk hereunder 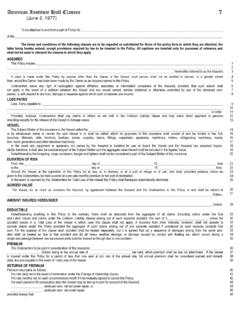 American Institute Hull Clauses 7 (June 2, 1977) To be attached to and form a part of Policy No of the The terms and conditions of the following clauses are to be regarded as substituted for those of the policy form to which they are attached, the