Ohio's Drainage laws An Overview The Ohio State University Extension - Bulletin 822. Ohio's Drainage laws An Overview Agricultural producers and landowners in humid areas like Ohio are concerned with the need to dispose of excess water. For agricultural producers, excess water can mean delayed planting, spring flooding and replanting, delayed cultivations, soil compaction and delayed harvesting. About 57 percent of Ohio's cropland acres are naturally poorly drained. According to the 1987 National Resources Inventory (USDA-SCS, 1989), Ohio has about million acres of cropland. Approximately 50 percent of these acres have received Drainage improvement, but another million acres need improved Drainage . In contrast, nearly all urban areas require stormwater management. For the private landowner in rural and urban areas, excess water can mean damage to the landscape, mudslides, basement and property flooding, and, in some cases, extensive damage to or loss of the dwelling.

landowner from changing the natural drainage, thereby increasing the burden on the lower landowner. The underlying principle is that lower lands are servient to

1 Ohio's Drainage laws An Overview The Ohio State University Extension - Bulletin 822. Ohio's Drainage laws An Overview Agricultural producers and landowners in humid areas like Ohio are concerned with the need to dispose of excess water. For agricultural producers, excess water can mean delayed planting, spring flooding and replanting, delayed cultivations, soil compaction and delayed harvesting. About 57 percent of Ohio's cropland acres are naturally poorly drained. According to the 1987 National Resources Inventory (USDA-SCS, 1989), Ohio has about million acres of cropland. Approximately 50 percent of these acres have received Drainage improvement, but another million acres need improved Drainage . In contrast, nearly all urban areas require stormwater management. For the private landowner in rural and urban areas, excess water can mean damage to the landscape, mudslides, basement and property flooding, and, in some cases, extensive damage to or loss of the dwelling.

2 Competition for various uses of Ohio's water resources has grown in recent years, as was seen during the 1988 drought. However, 1990 was the wettest year in 108 years of records, with more than 51 inches of precipitation. Therefore, after a series of "dry" years, the wet springs of 1989 and 1990 have again drawn much attention to the need for Ohio landowners to better understand their rights to dispose of or drain excess water. The disposal of excess water continues to be very important from an economic standpoint. Public awareness of the importance of excess water disposal and the environmental consequences is rapidly increasing. Water rights laws as they relate to the disposal of excess water in the rural and urban areas of Ohio are very complex. The existing laws have been under development for a long period of time and will continue to be reviewed and updated. This publication presents a brief Overview of the rights of Ohio landowners to dispose of excess water and the legal mechanisms by which to do so.

3 Some interesting Ohio decisions and opinions written since the mid-1950s are included. Major references are Callahan (1979), Nolte (1985a), the Ohio Revised Code (ORC), and Wright et al. (1985). This publication is intended to provide the reader with insight into how water rights problems related to Drainage are addressed in Ohio. It is not intended to provide strict legal interpretation. Note: Legal citations are italicized and footnoted in the text. The Basic Doctrines For Decisions Three separate rules of law have been developed and applied by Ohio courts over the years to determine the legal rights and responsibilities of landowners to dispose of excess water (Callahan, 1979; Wright et al., 1985). These are the common enemy doctrine, the civil law doctrine and the doctrine of reasonable use. The discussion on the common enemy and civil law doctrines that follows is intended to provide the reader a historical perspective on past court decisions that led to the present application of the reasonable use doctrine.

4 The common enemy doctrine, which generally has been applied to urban areas, gives an individual landowner the unqualified right to dispose of water. The underlying theory is that these waters are the common enemy of man to be fought off by each property owner as he/she sees fit. If one follows this theory, water could be disposed of without regard to the consequences to adjoining landowners. The civil law doctrine, which in the past generally applied to rural areas, requires the lower landowner to accept the natural water flow, but prohibits the upper landowner from changing the natural Drainage , thereby increasing the burden on the lower landowner. The underlying principle is that lower lands are servient to upper lands with respect to receiving the natural flow of diffused surface water. Ohio common law defines surface water as water diffused over the ground and derived from falling rain and melting snow; the water retains its status as surface water until it reaches a well-defined channel in which it merges with other waters.

5 At this point, surface waters become part of the running waters of a stream and cease to be surface waters (Crawford v. Rambo 1). The term diffused surface water, simply stated, is water spread over the ground surface; it is not concentrated in a well-defined channel. Although Ohio courts had adopted the civil law doctrine for application to Drainage of surface waters of rural lands, they held that it did not apply to urban areas. Since the Franklin County Court of Appeals decided the case of Lunsford v. Stewart 2 in 1953, many courts have applied the reasonable use doctrine to reach decisions related to surface water Drainage in urban areas. Lunsford v. Stewart involved an urban landowner who filled and built structures on his city lot that diverted the natural flow of water from the adjoining lot. The judgment in Lunsford v. Stewart was based in part on the reasonable use doctrine. Earlier Ohio courts generally applied the common enemy doctrine for "city" Drainage , but this rule had not been applied in all cases.

6 As Ohio has undergone the strains of urban and rural development, the courts have adopted many modifications and exceptions to the civil law and common enemy doctrines. In addressing the problems of applying these two doctrines, the court's reasonable use doctrine has evolved to provide flexibility and practicality to application of Ohio's Drainage laws . The reasonable use doctrine essentially provides that an acceleration or an obstruction of surface water flow should be examined to determine whether or not the change is "reasonable" in the particular case. In 1980, the Ohio Supreme Court applied the reasonable use doctrine in the case of McGlashan v. Spade Rockledge Corp. 3 The high court defined the rights of landowners as follows: "A landowner is not unqualifiedly privileged to deal with surface water as he/she sees fit, nor is he/she absolutely prohibited from interfering with the natural flow of surface waters to the detriment of others. A possessor of land is legally privileged to make a reasonable use of his/her land even though the flow of water is altered, thereby causing harm to others.

7 " The reasonable use doctrine has been applied to a number of cases in Ohio since 1953. For more reading on the progression of Ohio courts toward application of the reasonable use rule, the reader is referred to interpretative summaries provided in the University of Cincinnati Law Review (1980) and Capital University Law Review (1980). Reasonable Use In recent years, the Ohio Supreme Court appears to have adopted the reasonable-use rule as the basis for court decisions involving disposition of surface water. In the 1976 case of Chudzinski v. Sylvania 8 involving accelerated runoff from a shopping center that caused downstream damages on private property, the appeals court decision provided a detailed statement of the reasonable use rule. In 1977 the village of Mayfield, in Myotte v. Mayfield 9, was found liable for injury for permitting construction of an industrial complex causing flooding of a lower riparian's land by greatly increased runoff of surface water.

8 The court found that the village knew of a flooding problem prior to permitting construction and failed to implement a solution so that increased flow from the industrial park could be accommodated. After a review of the common enemy and civil law doctrines, and information about the stream capacity, the court of appeals chose to apply the "broader, more flexible rule of reasonableness.". The court's 1980 decision in McGlashan v. Spade Rockledge Corp. 3 appears to be dominant in support of application of the reasonable use doctrine. A developer had begun construction of condominiums in the city of Broadview Heights before completing a new Drainage system to take care of the altered Drainage . An August rainstorm occurred, causing excess runoff from cleared land that carried mud, rocks and other debris onto adjoining property and causing flooding of basements. The Ohio Supreme Court found the developer liable for damages. The court's declaration further stated that the Court adopts a reasonable use rule to be used in resolving surface water controversies as follows: "A possessor of land is not unqualifiedly privileged to deal with surface water as he pleases, nor is he absolutely prohibited from interfering with the natural flow of surface waters to the detriment of others.

9 Each possessor is legally privileged to make a reason able use of his land, even though the flow of surface waters is altered thereby and causes some harm to others. He incurs liability only when his harmful interference with the flow of surface water is unreasonable. In determining the reason' ableness of an interference, the trier of fact is to be guided by the rules stated in 4 Restatement on Torts 2d 108-142, Sections 822 831." The court cited Lunsford v. Stewart 2, Munn v. Horvitz 5, Chudzinski v. Sylvania 8, and Myotte v. Mayfield 9 in making its decision. Four cases, Lunsford v. Stewart 2, Masley v. Lorain 7, Myotte v. Mayfield 9, and McGlashan v. Spade Rockledge Corp. 3 are important cases that set certain precedents. In particular, the McGlashan v. Spade Rockledge Corp. ruling has been interpreted to be very strong and diminishes the strength of the common enemy and civil law doctrines. Three of the cases mentioned above were recently cited in a court of appeals ruling that upheld a lower court decision in the case of Huggins Farms, Inc.

10 V. Bucyrus Plaza Ltd., et al.' 10 in May of 1989. This unreported Crawford County case involved the interference with surface water Drainage that resulted in the regular flooding of 20 acres of land. The court ruled that the interference was unreasonable. In 1981, the Court of Appeals of Cuyahoga County applied the reasonable use rule in Accurate Die Casting Co. v. Cleveland 11. In this case, a municipality imposed its storm sewer system on a natural watercourse, subsequently causing flood damage to a commercial business. This case is noteworthy, not only because of the application of reasonable use, but the decision that the defense of sovereign immunity does not preclude liability for damages caused by a municipality's negligent design of its storm sewer system. This ruling was ap pealed to the Ohio Supreme Court, which would not hear the appeal, thereby supporting the appeals court decision. Urban Sediment And Stormwater Management Various organizations have developed stormwater runoff control criteria.

A Personal Guide to - Atrium Med

Table of contents Your personal guide to managing water seal chest drainage is a quick and easy reference to help extend your understanding of chest tube drainage and ... 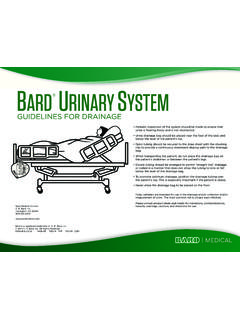 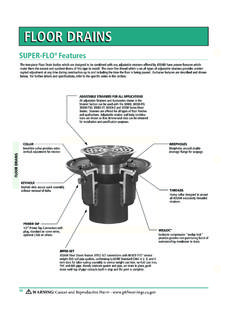 103 FLOOR DRAINS FLOOR DRAINS How To Choose A Floor Drain Adequate and proper drainage of surface areas within and immediately adjacent to building structures is of prime importance.

During the growing season, the outlet control structure is managed so that the water table in the affected fields stays relatively close to, but below, the roots of growing plants. 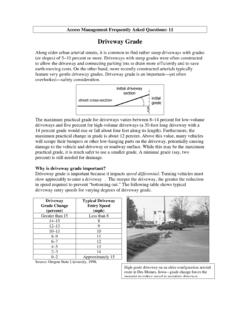 Speed differential is the difference between the speed of vehicles that are continuing along the main roadway versus that of those that are turning into or out of the driveway.