4 The impact of foreign currency exchange rates on market prices and operating costs, the availability of sufficient credit, the effects of inflation, political uncertainty and economic conditions in relevant areas of the world, the actions of competitors, activities by governmental authorities such as changes in taxation or safety, health, environmental or other types of regulation in the countries where Anglo American Platinum operates, conflicts over land and resource ownership rights and such other risk factors identified in Anglo American Platinum's most recent Annual Report. Forward-looking statements should, therefore, be construed in light of such risk factors and undue reliance should not be placed on forward-looking statements.

5 These forward-looking statements speak only as of the date of this presentation. Anglo American Platinum expressly disclaims any obligation or undertaking (except as required by applicable law, the Listings Requirements of the securities exchange of the JSE Limited in South Africa and any other applicable regulations) to release publicly any updates or revisions to any forward-looking statement contained herein to reflect any change in Anglo American Platinum's expectations with regard thereto or any change in events, conditions or circumstances on which any such statement is based. Nothing in this presentation should be interpreted to mean that future earnings per share of Anglo American Platinum will necessarily match or exceed its historical published earnings per share.

6 Certain statistical and other information about Anglo American Platinum included in this presentation is sourced from publicly available third party sources. As such it presents the views of those third parties, but may not necessarily correspond to the views held by Anglo American Platinum. No Investment Advice This presentation has been prepared without reference to your particular investment objectives, financial situation, taxation position and particular needs. It is important that you view this presentation in its entirety. If you are in any doubt in relation to these matters, you should consult your stockbroker, bank manager, solicitor, accountant, taxation adviser or other independent financial adviser (where applicable, as authorised under the Financial Advisory and Intermediary Services Act 37 of 2002 in South Africa).

7 2. PLATINUM. So in a conference like this what would we talk about? . Furnace bellows operated by waterwheels,13th Century, China Smelting ore . De re metallica, Georgius Agricola,1556. 3. PLATINUM. Agenda OVERVIEW of PGM PROCESSING Alternatives for primary PGM PROCESSING Drivers of value What does this mean for the Northern Limb Growth? 4. PLATINUM. OVERVIEW of PGM Resources Platinum Group Metals (PGMs) are recovered through underground and open pit mining from poly-metallic sulphide ores containing PGMs, Nickel, Copper and other metals: Platinum (Pt), Palladium (Pd), Rhodium (Rh) and Ruthenium (Ru) are the most prevalent of the six PGMs, with Iridium (Ir), and Osmium (Os) found in much smaller quantities Gold is often associated with PGM deposits and treated as part of a family with Platinum, Palladium and Rhodium collectively known as 4E.

8 Nickel and Copper are the most prevalent base metals Chromite (used to derive Chrome) is another significant byproduct Cobalt, silver, selenium and tellurium are found and recovered in trace quantities World PGM reserves total about 3,200 M oz (c. 200 years at the current rate of production), and are found in relatively few areas of the world; South Africa (88%), Russia (8%), North America (2%), Zimbabwe (1%) and Rest of World (1%). South Africa (SA) is the source of over 60% of newly mined PGMs and over 80% of Platinum. PGM mining in South Africa is located in the Bushveld Complex in three regions commonly referred to as the Western, Eastern, and Northern Limbs The Bushveld Complex includes three distinct mineral-bearing reefs: The Merensky Reef, the source of most historical and current SA production, contains relatively higher PGM grades and ratios of Platinum (vs Palladium). 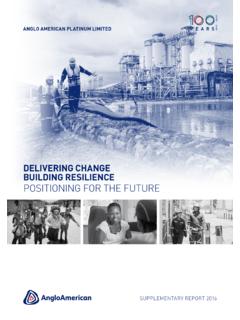 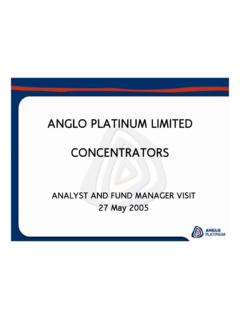 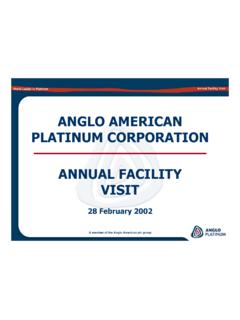