Press Selection and Maintenance - & PDF 1993 - 2001 Rev- August 22, 2005. Smith & Associates, 530 Hollywood drive , Monroe, Michigan 48162-2943. Press Selection AND Maintenance . Success in any activity requires that a number of tasks be done correctly. In metal stamping, everything from poor quality parts to accelerated die wear and damage often is caused by poor Press Selection , diesetting and machine Maintenance . No responsible machine shop manager would neglect machine tool lubrication, alignment and repair. The same principle must be applied to Press Selection and Maintenance . A power Press is a machine used to supply force to a die that is used to blank, form, or shape metal or nonmetallic material. Thus, a Press is a component of a manufacturing system that combines the Press , a die, material and feeding method to produce a part. The designer of the manufacturing system must also provide proper point of operation guards to safeguard pressroom personnel.

1 Press Selection and Maintenance - & PDF 1993 - 2001 Rev- August 22, 2005. Smith & Associates, 530 Hollywood drive , Monroe, Michigan 48162-2943. Press Selection AND Maintenance . Success in any activity requires that a number of tasks be done correctly. In metal stamping, everything from poor quality parts to accelerated die wear and damage often is caused by poor Press Selection , diesetting and machine Maintenance . No responsible machine shop manager would neglect machine tool lubrication, alignment and repair. The same principle must be applied to Press Selection and Maintenance . A power Press is a machine used to supply force to a die that is used to blank, form, or shape metal or nonmetallic material. Thus, a Press is a component of a manufacturing system that combines the Press , a die, material and feeding method to produce a part. The designer of the manufacturing system must also provide proper point of operation guards to safeguard pressroom personnel.

2 Each of the components of this manufacturing system is important and will be discussed in turn later in this work. A foundation for understanding the system is acquiring a working knowledge of the Press . Examples of good practices and warnings against bad practices are to be found throughout this training. It is very important that the good practices that are appropriate for your shop are the ones that you adopt as your standard diesetting, production and die Maintenance procedures. Types of Presses There are over 300,000 presses in use in the United States and many more worldwide. Mechanical and hydraulic presses fall into two predominant types: gap frame and straight side presses. The frame types used in mechanical presses are similar to those used in many hydraulic presses. Most power presses are actuated by electrical motor driven mechanical or hydraulic energy. However, gravity drop hammer and foot powered kick presses are also used. The drive systems, clutches, brakes, counterbalance systems, die cushions, electrical, hydraulic and pneumatic features are similar in both the gap frame and straight side types.

3 The type and size of Press selected is mainly determined by the work to be done. Gap Frame Presses Gap-frame or C-frame presses derive their name from the C-shaped throat opening. In addition to the familiar open back design, this style of machine has a long history of use for portable hole punching. The Press -brake is also a type of gap-frame Press . Features of Gap-Frame Presses Gap or C-frame presses have many useful features. These include excellent accessibility from the front and sides for die setting and operation. The machines also cost substantially less than straight-side presses. The open back is available for feeding stock as well as ejection of parts and scrap. 1. Press Selection and Maintenance - & PDF 1993 - 2001 Rev- August 22, 2005. Smith & Associates, 530 Hollywood drive , Monroe, Michigan 48162-2943. A further advantage of a gap frame Press is that the machine is easier to set-up than a straightside Press . The diesetter has much greater freedom of access to locate and bolt the die in place.

4 The open back is also accessible for discharging finished parts and scrap as well as feeding stock. Gap-frame presses generally have less height than a straightside Press of comparable tonnage. This is a valuable consideration when overhead clearance is limited. A B C. Figure 1. An older style unguarded open back inclinable (OBI) gap frame Press (A) with tie-rods added to reduce angular deflection. A modern gap frame OBI Press (B). A. modern OBS guided plunger Press (C). Illustrations (B) and (C) Courtesy of Minster Corporation Presses with force capacities up to 250 tons (2,224 kn.) and larger, gap frame presses are less costly than a straightside Press having the same force capacity. In the 35 to 60-ton (311 to 534 KN) force range, they cost approximately half that of straightside presses. The main disadvantage of gap frame presses is an unavoidable angular misalignment that occurs under load. Limiting the amount of angular misalignment requires very robust construction this adds to the weight and cost of the machine.

5 Examples of Gap Frame Press Figure 1 illustrates three types of gap frame presses. Illustrations (A) and (B) a style of machine is known as an open back inclinable or OBI Press . The Press frame is secured in a cradle, which permits the machine to be inclined backward. This is done to facilitate gravity loading as well as part and scrap discharge out of the open back of the Press . 2. Press Selection and Maintenance - & PDF 1993 - 2001 Rev- August 22, 2005. Smith & Associates, 530 Hollywood drive , Monroe, Michigan 48162-2943. The frame of older OBI presses is cast construction. The most commonly used materials are gray cast iron or steel. Figure 1 illustrates two pre-tensioned tie-rods across the open front of the machine. Lugs are cast into the frame of the machine to accept the tie-rods that are installed as an option to reduce angular deflection. The development of timed air blow-off devices and a variety of small conveyors has lessened the demand for the OBI style of presses.

6 Today, many OBI presses are operated in the vertical position. While the OBI style is still built (Figure 1B), the open back stationary (OBS) type (Figure 1C) is more popular. Open Back Stationary (OBS) Gap Frame Presses The open-back stationary gap-frame Press shown in Figure 1-C is more compact and often a more robust machine than the older OBI style that it has largely replaced. The OBS Press has a box-like structure. OBS presses are made of high strength cast iron or fabricated of heavy steel plate and assembled by welding. Limitations of Gap Frame Presses The chief limiting factor of this type of machine is that it has more deflection than a straight-side Press for a given load. The deflection has both a vertical and angular component. The angular deflection or misalignment that occurs is due to the spreading of the throat opening as tonnage is developed. In many applications, this angular misalignment under load may not be objectionable. This style of Press is popular for short-run work, where high accuracy of die alignment or close part tolerances are not necessarily controlling factors.

7 For low tonnage high-speed work, precision gap presses are widely used. Here, the work is done before bottom of the stroke and the light loading avoids angular deflection problems. However, straightside presses are generally recommended for any application where angular machine deflection would cause unacceptable part quality and accelerated die wear. The lower cost of gap frame construction machines may be poor economy if accelerated tooling wear and quality problems result. Measurement of Gap-Frame Press Stiffness An older accepted American standard that has been used by builders of gap-frame presses is per inch (mm per mm) of throat depth measured from the centerline of the connection to the back of the throat opening. This measurement includes both vertical and angular deflection. Angular deflection is by far the greatest concern because it results in misalignment between the punch and die. ANSI standard M specifies both the allowable vertical and angular deflection in machines built to metric standards.

8 A practical measurement procedure is to place a jack capable of full rated tonnage at the centerline of the slide and bed. The vertical deflection is then measured between the centerline of the slide and bed. It should not exceed per inch (mm/mm) of distance from the centerline to the back of the throat opening. Some Press builders design for a lower value of deflection. 3. Press Selection and Maintenance - & PDF 1993 - 2001 Rev- August 22, 2005. Smith & Associates, 530 Hollywood drive , Monroe, Michigan 48162-2943. Since this measurement is intended to pick-up an angular value, measuring the difference from front to back across the slide face will give similar results. For many applications, angular misalignment under load is harmful. If the job cannot be run in a straightside Press , some reduction in angular deflection can be achieved by installing tie-rods across the open front of the Press . Adding Tie-Rods to Gap Presses Some older gap-frame presses have existing lugs for tie-rod installation in the front of the machine.

9 This is illustrated in Figure 1A. In other cases, the manufacturer may supply lugs, which can be welded in place. Provided the rods are properly pre-stressed, a significant reduction in deflection results. The best method of installing tie-rods is to use them in conjunction with tubular steel spacers around the rods. The spacers help ensure that the tie-rods are not over-stressed, and serve to further stiffen the machine. At best, adding pre-stressed tie-rods to a gap frame Press will result in reduced total angular misalignment. The physically limiting factor is that the cross sectional area of the tie-rod and spacer is small compared to that of the Press frame. Also, adding tie-rods to the front of the Press limits access to the die opening, and can make the point of operation more difficult to guard properly. The spacer should have times the area of the tie-rod. In addition to adding stiffness, the spacers will reduce the alternating load in the tie-rod thread.

10 The tie-rod area should be sufficient to support half the force capacity of the machine. A conservative nominal pre-stress in the tie-rod is approximately 14,000 psi (96,516 kPa). Straightside Presses Straightside presses derive their name from the vertical columns or uprights on either side of the machine. The columns together with the bed and crown form a strong housing for the crankshaft, slide and other mechanical components. The housing or frame of most straightside presses is held together in compression by pre- stressed tie rods. Some straightside presses have solid frames. Generally, a solid frame straightside Press is less expensive than one having tie rods. However, tie rod presses are easier to ship disassembled and have better ability to withstand overloads. Straightside Press Advantages A major advantage of the straightside Press compared to the gap-frame machine is freedom from angular misalignment under load. Maintaining true vertical motion throughout the Press stroke is critical to minimize tool wear and obtain accurate part tolerances. 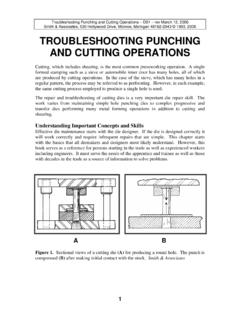 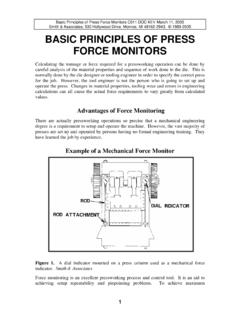 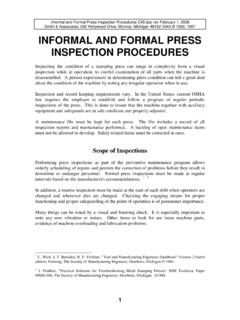 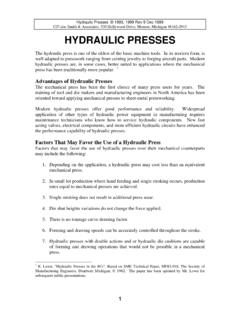 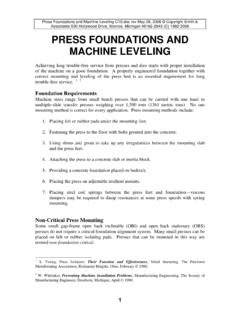 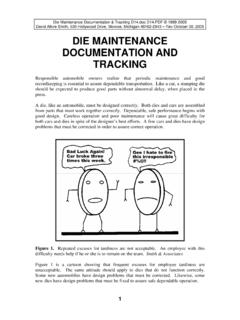